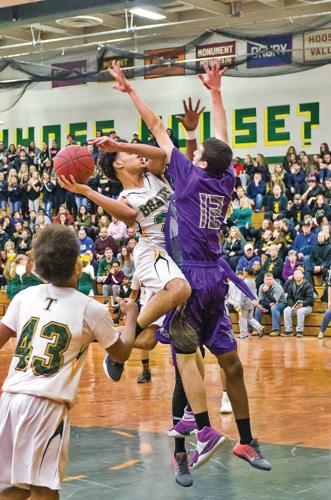 Taconic's Isaac Percy attempts to drive through the block of Pittsfield's Joe Cracolici. 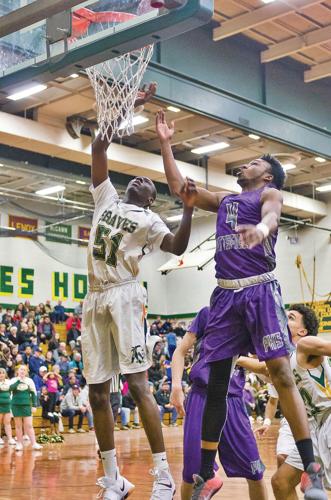 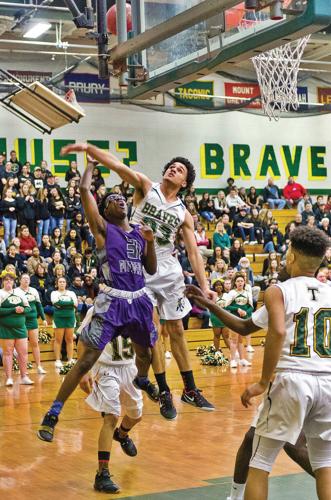 Defense was the name of Taconic's game as Isaac Percy, center, blocks a shot from Pittsfield's Anton Wright during Friday's game at Taconic. 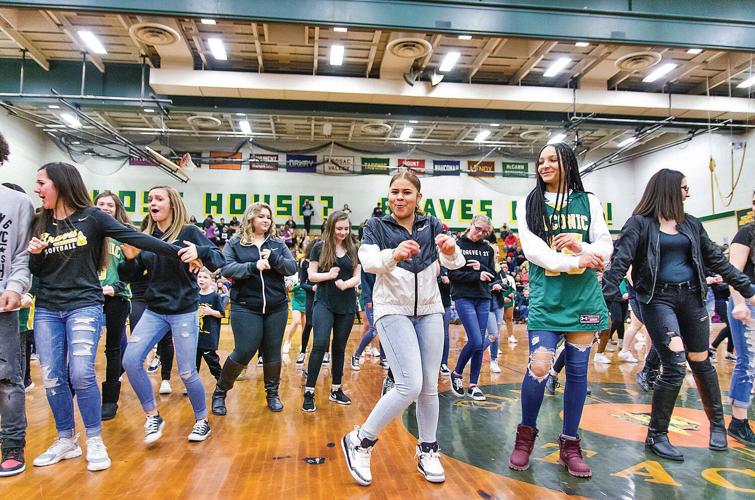 Keyarah Wright (center) and Tamia Patrick (right) dance with a flash mob of nearly a hundred other Taconic students at halftime. It marked the last time the PHS-Taconic rivalry will be played on this court.

Taconic's Isaac Percy attempts to drive through the block of Pittsfield's Joe Cracolici.

Defense was the name of Taconic's game as Isaac Percy, center, blocks a shot from Pittsfield's Anton Wright during Friday's game at Taconic.

Keyarah Wright (center) and Tamia Patrick (right) dance with a flash mob of nearly a hundred other Taconic students at halftime. It marked the last time the PHS-Taconic rivalry will be played on this court.

PITTSFIELD — Playing in a rivalry game, the ability to handle the atmosphere and play under control is almost as important as passing and shooting.

For Taconic, the Braves were playing for city pride against rival Pittsfield in the final regular season game at the soon-to-be vacated high school.

The Braves showed no signs of being burdened with added pressure, using strong team-oriented basketball for a 50-35 win on Friday.

Three Braves reached double figures in the win, with Isaac Percy leading the way with 12 points. On defense, Taconic (8-5, 2-1) crowded the paint and kept hands in the passing lanes, forcing tough interior passes and contested shots from the outside. Pittsfield (5-7, 1-1) didn't score its first points until the 6-minute mark in the first quarter, and

Taconic held a 14-4 advantage after one that stood up for the rest of the game.

"We just said we need to play our game and we knew the shots were going to start falling eventually," Percy said. "Our chemistry's so strong together, that it just helps our defense bond and we just go all out."

Pittsfield entered the game with a lot of new faces playing in their first city rivalry game. In addition to young players taking on new roles, the Generals were missing key contributors Sam Higuera and Edwin Rodriguez, forcing multiple players to take on a bigger roles.

Taconic allowed just one made field goal in the second quarter. Elton Wilkins' three-point play cut Pittsfield's deficit to seven on the opening play of the third. Quentin Gittens' jumper, followed by a Javier Osorio fastbreak layup put the Braves back up 11. While Taconic attacked in transition and swung the ball around to open shooters, a lot of Pittsfield's offense was generated off isolation. Wilkins had some strong baskets inside, Kymani Harley added some tough jumpers in traffic, and Anton Wright provided a spark off the bench with team-high 11 points, but the visitors could not string together enough consistent offense to threaten Taconic's lead.

Playing without Higuera and Rodriguez certainly hurt, especially when considering Higuera's passing ability. Without Higuera, the Generals struggled to get the ball inside to post player Joe Cracolici, forcing them to rely on difficult baskets in one-on-one situations.

"We were a little stagnant," Pittsfield coach Brandon Mauer said. "We kind of got away from what makes us successful. They put us in a bind. They played really good defense. They've been perennially a team that plays really good man defense and they kind of took us out of our game."

While the offense came and went at times, both team displayed their athleticism with highlight-reel blocks. Taconic's Mohamed Sonogo (standing about 6-foot-8) made his presence felt with several rebounds and big swats in the first half. Wilkins returned the favor with a block in the second half.

Osorio banked in a 3-pointer to start the fourth. Harley drained a jumper and Cracolici split a pair of free throws before Percy iced the game with a trey, putting the Braves up 12 with 3:38 left.

Osorio spear-headed Taconic's defense and helped provide a calming influence as the lone senior on the team. Osorio said he stressed the importance of using strong defense to generate offense to teammates. He added that the team wanted to make a statement after getting its seven-game win streak snapped on Wednesday.

"We just decided to go out there and have fun," he said. "We really wanted to make a statement after our loss to Longmeadow."

Akeem Glaspie can be reached at aglaspie@berkshireeagle.com, at @TheAkeemGlaspie on Twitter and 413-496-6252.