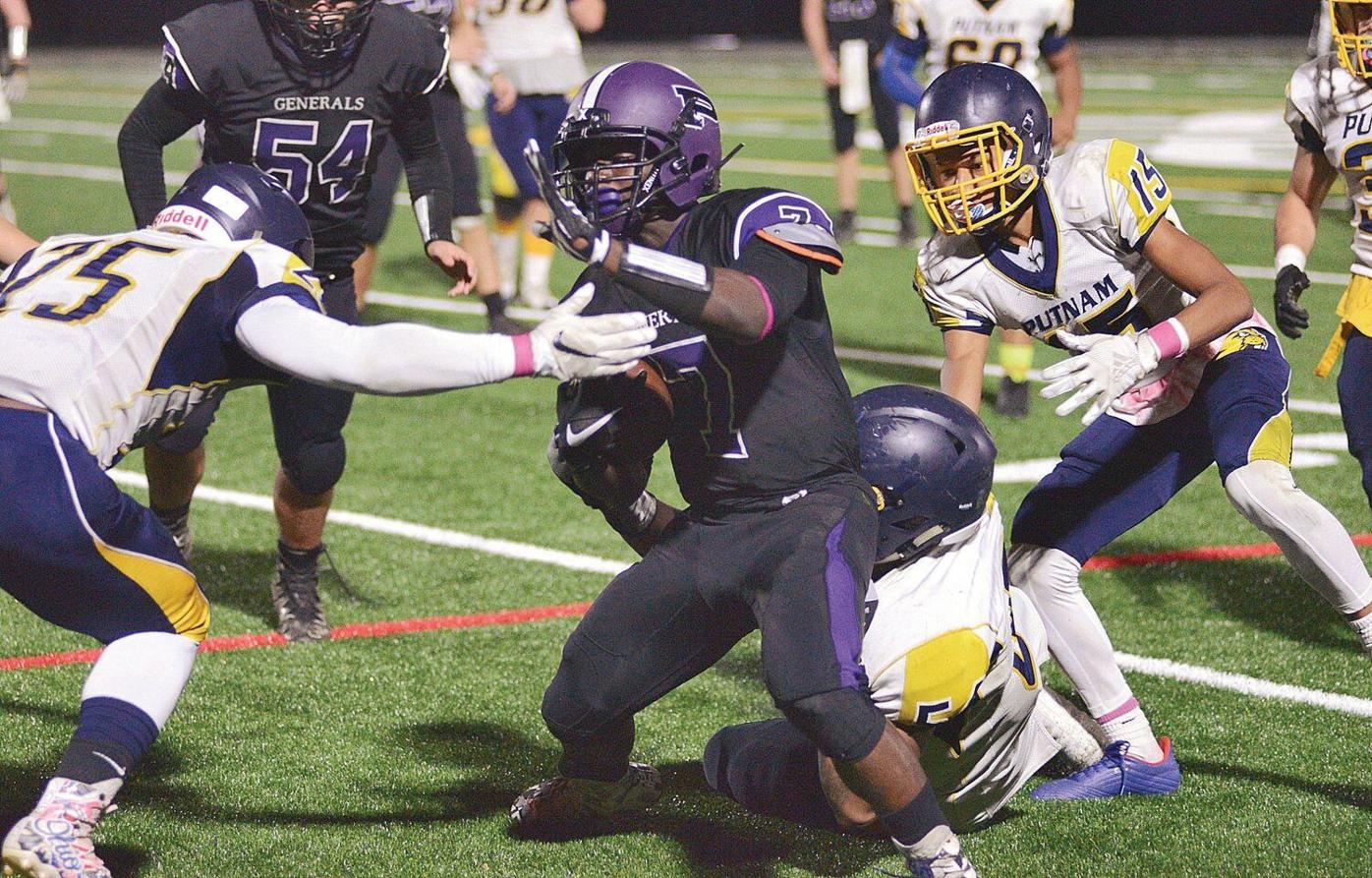 Pittsfield running back Emmanuel Nda has announced his college commitment. Nda has verbally committed to attend the U.S. Military Academy at West Point. 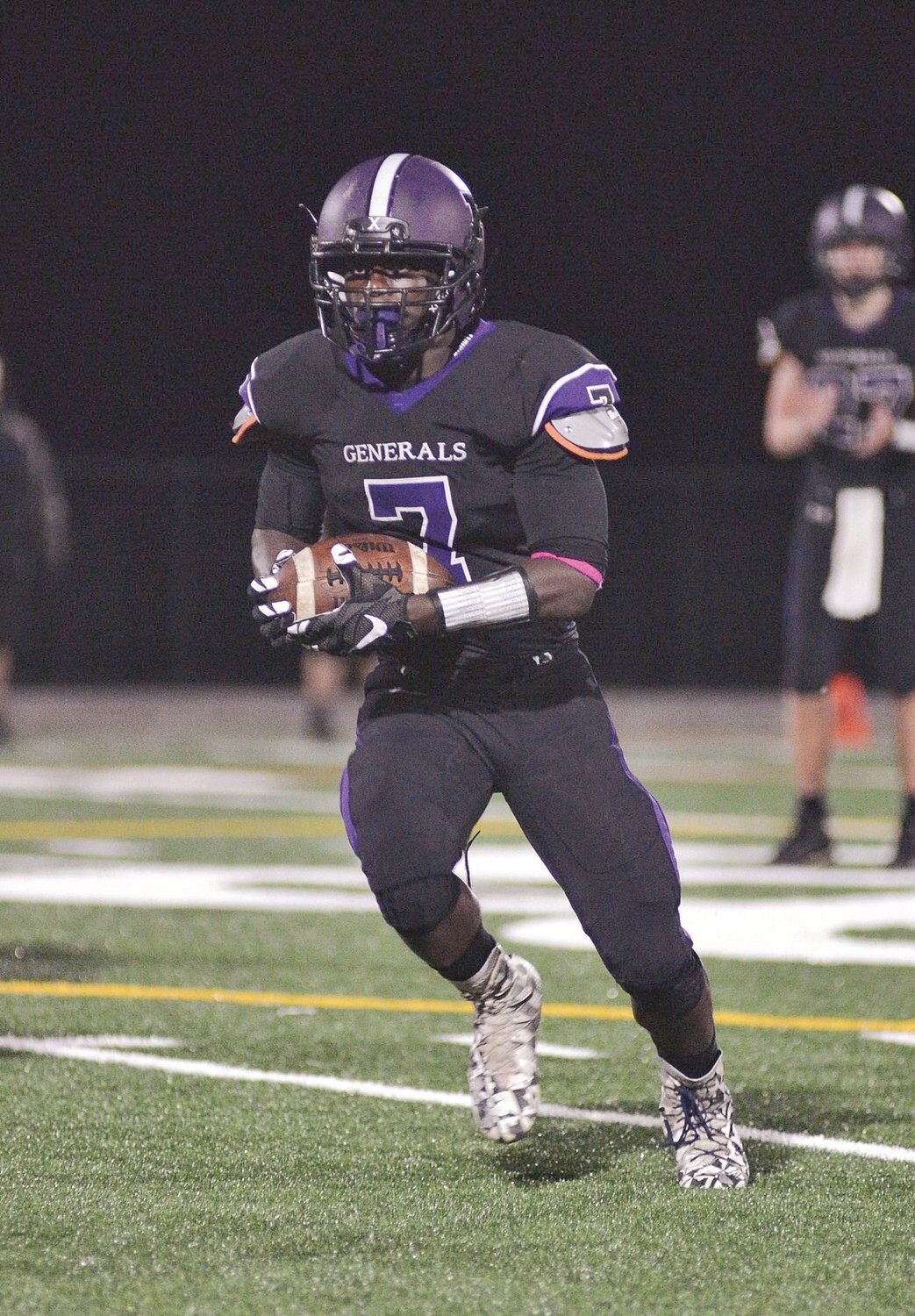 Pittsfield running back Emmanuel Nda has made his college decision. Nda announced on Twitter Thursday that he will attend the U.S. Military Academy at West Point, and play football for Army. The next step for Nda in his college process will be getting a congressional appointment to West Point.

Pittsfield running back Emmanuel Nda has announced his college commitment. Nda has verbally committed to attend the U.S. Military Academy at West Point.

Pittsfield running back Emmanuel Nda has made his college decision. Nda announced on Twitter Thursday that he will attend the U.S. Military Academy at West Point, and play football for Army. The next step for Nda in his college process will be getting a congressional appointment to West Point.

PITTSFIELD — For Emmanuel Nda, the pressure is off. Now, he can concentrate on his senior season and then heading to play football at Army West Point.

Nda, a rising senior at Pittsfield High School, announced on his Twitter feed Thursday morning that he had committed to play football for head coach Jeff Monken at the U.S. Military Academy.

"I'm like relieved and excited," Nda said. "I've been prolonging [the decision]. My parents were all for it, but I was just kind of waiting for more offers, seeing if I could get any more. I was always leaning toward Army.

"It's relief and excitement."

Pittsfield football coach Brian Jezewski had nothing but praise for his running back.

"He's put the work in," Jezewski said. "It's an amazing opportunity, an opportunity of a lifetime for him. He's earned everything that he's accomplished.

"We can't explain to begin how proud we are of him."

Army West Point was the first school to offer Nda a chance to play Division I college football. That was followed by an offer from Division I-FCS Bryant.

"I've had a lot of time to think actually, since we have been quarantined," Nda said. "I got the offer in, mid-April. Since April, it was the biggest offer that I got. In regards to not only playing college football at a high level, but the benefits that are coming outside of the school when I graduate are very, very good."

The PHS standout still has to receive his congressional appointment to West Point, as the final step toward admission.

The rising senior was named football's Offensive Player of the Year when The Berkshire Eagle unveiled it's 2019-20 All Stars. He ran for 1,432 yards and scored 17 touchdowns. He gained 259 yards or more three different times, and averaged 179 yards and two touchdowns per game.

Nda, listed at 5-foot-9, 172 pounds, has also been a track and field standout for the Generals.

In 2019, he finished third 100 meters at the Central-Western Mass. meet. His time of 11.26 seconds was the fastest by a Western Mass. runner in the final. He ran a 11.10 in the preliminaries, finishing second. Nda also anchored the PHS 4-by-100 relay team that earned a second-place finish in the 2019 meet at Fitchburg.

With this out of the way, the future Cadet can now concentrate on the immediate tasks at hand for PHS.

"It's definitely less of a worry. Obviously, I know where I'm going now," Nda said. "I've just got to work harder and harder."

Army went 5-8 last year under Monken, who is set to begin his seventh year at Army West Point this fall.

The Pittsfield coach has had numerous conversations with Army West Point staff.

"They're very, very interested in E-Man," Jezewski said. "Obviously, his speed comes out on film. But its even more about his football ability, his character, who he is as a person. Emmanuel is a born leader."

And for Jezewski, Nda going to West Point is about more than just playing football on Saturdays.

"We tell our guys when they are looking for schools, you choose four for 40. You choose four years for the next 40 years. Whether it's the Brotherhood at Springfield College, where Dominic [Traversa] and Chad [Shade] went, where I had an opportunity to go, Army's at a whole different level," Jezewski said. "It's an amazing opportunity for him and his family. If he's willing to put the work in, he'll set himself up for the rest of his life."

Nda is the first football player from Berkshire County to go to Army West Point since Nick Sabellico. Sabellico, who played two years at Taconic before going to New Mexico Military Academy and then the U.S. Military Academy Prep School, went to West Point in 2008, and spent some time on the football team.

While Berkshire County is not known for sending a ton of football players to Division I, Pittsfield's Jake Hescock is currently the senior man on the D-I list. The redshirt senior tight end is heading into his final season at UCF.

Williamstown's Jake Benzinger played D-I football at Wake Forest and is now on his way to camp with the NFL's Arizona Cardinals. Ben Harding of Lee is part of the incoming class at Harvard. Paul Metallo of Pittsfield was a standout running back at the University of Massachusetts.

Nda's first game with Army West Point would be on the road at Georgia State on Sept. 4, 2021. His freshman season would include home games against UConn, Wake Forest and UMass, on Nov. 20. The Cadets are scheduled to be at UMass on Nov. 26, 2022.

Now that the commitment is in the books, the future Cadet was asked if he's had a chance to think about running out on the turf at historic Michie Stadium.

"It's too abstract. It's too unreal," said Nda. "I haven't even thought about that to be honest."