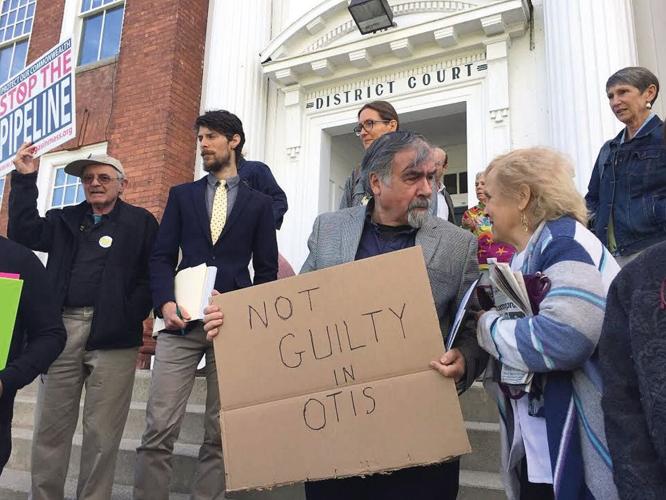 Stephen Stoia, center, of Northfield, was one of 24 pipeline opponents scheduled to be arraigned in Southern Berkshire District Court on Thursday in connection with last week's protests at Otis State Forest. 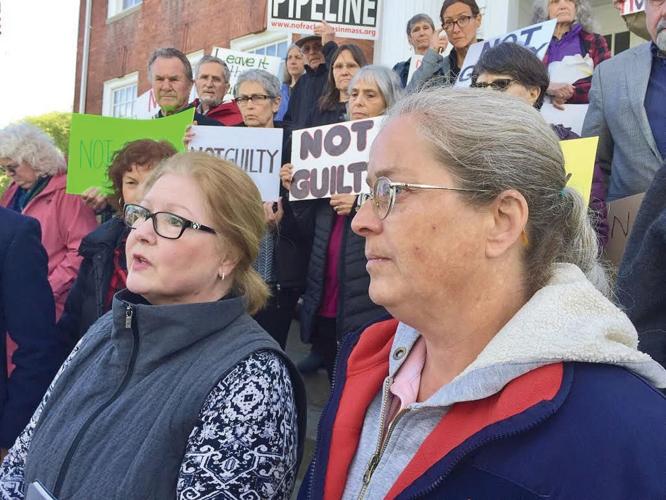 Jean Atwater-Williams, left, and Susan Baxter, right, members of Sandisfield Residents Opposed to the Pipeline (STOP), support the two dozen activists who were scheduled to be arraigned on Thursday in Southern Berkshire District Court in Great Barrington. Prosecutors will move to reduce the charges in the case.

Stephen Stoia, center, of Northfield, was one of 24 pipeline opponents scheduled to be arraigned in Southern Berkshire District Court on Thursday in connection with last week's protests at Otis State Forest.

Jean Atwater-Williams, left, and Susan Baxter, right, members of Sandisfield Residents Opposed to the Pipeline (STOP), support the two dozen activists who were scheduled to be arraigned on Thursday in Southern Berkshire District Court in Great Barrington. Prosecutors will move to reduce the charges in the case.

GREAT BARRINGTON — The state wants to reduce the charges against a group of anti-pipeline protesters who were arrested in Otis State Forest last week, but the activists are having none of it.

During an appearance at Southern Berkshire District Court on Thursday, 24 members of the Sugar Shack Alliance bristled when Judge Paul M. Vrabel ordered a civil responsibility hearing on June 20, at which a motion for the change will be made.

Alliance members, who had prepared to be arraigned on charges of trespassing on state property, came bearing "not guilty" signs to hold up at a press conference after the proceedings.

"The state pulled a trick on us," said alliance member Vivienne Simon on the courthouse steps. "We were caught off guard today."

Alliance members were arrested on Department of Conservation Resources land for blocking an access road and temporarily stopping ongoing tree cutting and clearing for 2 miles of new pipeline. Kinder Morgan subsidiary Tennessee Gas Pipeline Co. won an easement from the state last year to expand an existing corridor in Sandisfield for its Connecticut Expansion Project, a 13 mile natural gas storage loop that will run through three states.

Eighteen arrests were made May 2; six more protesters were arrested Saturday.

Berkshire District Attorney spokesman Frederick Lantz said reducing the charges is "fairly common practice when it is prudent and appropriate — legislators and the courts have asked us to do that."

He said the less-serious civil charges of trespassing and disorderly conduct will keep the activists out of jail. They will still have to pay the $100 fine, however.

The protesters vowed to fight that change, saying the criminal charge they currently face better allows them to make their point about their arrest while trying to stop the pipeline project.

Simon, who was arrested May 2, said the state fears publicity from a trial that would allow the group to "address climate chaos" and get their message out.

While the protesters are against any expansion of the fossil fuel industry, Simon said it is the Federal Energy Regulatory Commission's process to approve this pipeline that is fueling the wrath of several groups, including Sugar Shack.

FERC gave permission for the company to begin work before it had considered actions filed with it by several groups, including Sandisfield Taxpayers Opposed to the Pipeline (STOP) — an action based the public need for this project, and one the agency said last year had "merit."

Spokesman Craig Cano told The Eagle the agency could not act on STOP's pending request because it lacks of a quorum.

But three U.S. lawmakers representing Massachusetts took FERC to task last month for giving the company permission to start work despite not having a quorum — a minimum number of voting members.

"We hold that they are both immoral and illegal," Simon said.

"We haven't exhausted all our legal options," she said, noting that the pipeline runs through her property. She said the group's attorney is a pipeline and eminent domain expert who used to work for FERC.

Simon said no matter what, the activists, who are using private land next to the pipeline corridor as a staging ground, will keep at this until the project is stopped.

"There are many different avenues," she said.