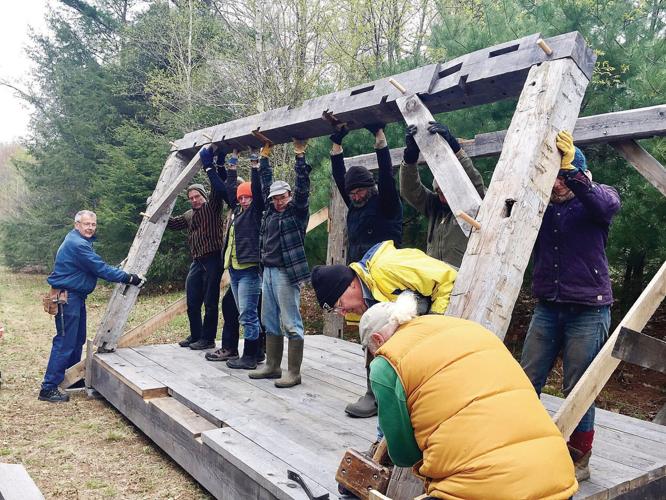 Anti-pipeline activists raise a small post and beam cabin Monday next to Tennessee Gas Pipeline Co.'s easement in Otis State Forest that will expand an existing corridor for its Connecticut Expansion Project. 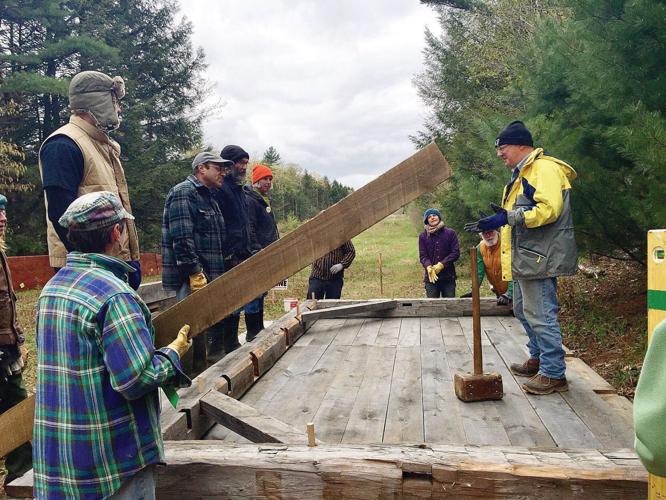 Will Ellwell, left, instructs other Sugar Shack Alliance members as they prepare to raise a beam. Ellwell is a contractor who specializes in post and beam construction. 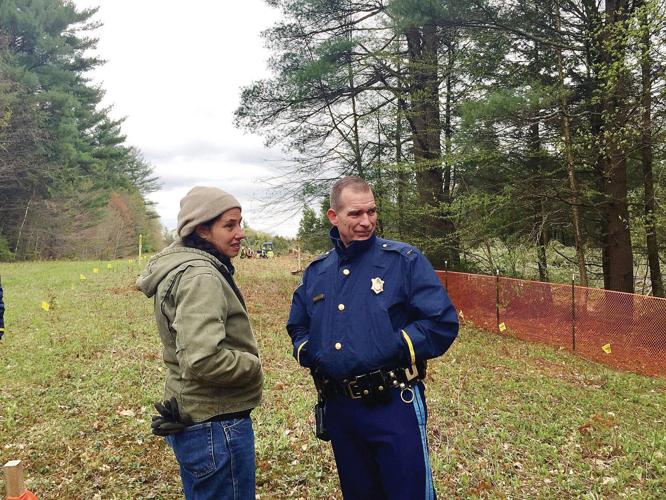 State Police spoke with the activists and were prepared to make arrests for trespassing, if necessary.

Anti-pipeline activists raise a small post and beam cabin Monday next to Tennessee Gas Pipeline Co.'s easement in Otis State Forest that will expand an existing corridor for its Connecticut Expansion Project.

Will Ellwell, left, instructs other Sugar Shack Alliance members as they prepare to raise a beam. Ellwell is a contractor who specializes in post and beam construction.

State Police spoke with the activists and were prepared to make arrests for trespassing, if necessary.

As a vicious wind shot through the pipeline corridor in Otis State Forest, activists began installing a 10-by-15-foot cabin on adjacent private land, a post and beam structure made famous for its year-long use in Ashfield last year to protest Kinder Morgan's Northeast Energy Direct Pipeline (NED).

While the company eventually shut down its plans for NED, citing gas demand issues, subsidiary Tennessee Gas Pipeline Co.'s Connecticut Expansion Project looks like it will make the finish line.

The cabin may not, however. Members of Sugar Shack Alliance, an anti-pipeline group, were well into construction when a town official came to tell members the structure violated local zoning laws because it is within 30 feet of the state property line. He said the state Department of Conservation Resources had just filed a complaint, according to Sugar Shack spokeswoman Abby Ferla.

It all began earlier, when just over a low orange fence demarcating the company's easement on state-owned land, workers slowly took trees down one by one with a chainsaw, guiding them with ropes to fall away from the existing corridor where a slice of private land crosses it, and where the activists have been assembling.

The owner of this land, Susan Baxter, kept this particular stand of trees from the saw by sitting on a rock at the property line, while workers cut around it.

Trees in this roughly 2 miles of state forest that required cutting for the company's natural gas storage loop are almost all gone but for this last swath. The $93 million, 13-mile tri-state line has been delayed about a year by legal challenges on a number of grounds as the state and other groups fought the project.

But here it finally is. Just over a week into cutting and already 24 arrests have been made during peaceful protests last Tuesday and Saturday.

Now Sugar Shack activists are settling in on Baxter's land for the 6 month construction period, traveling here in their spare time to continue this resistance.

Ferla said this cabin is one nonviolent tool in the group's toolbox. And it has drawn attention before. While it might not have stopped the NED project, it certainly didn't help the company's public relations efforts, Ferla said.

Its creator is Will Elwell, an Ashfield contractor who specializes in post and beam construction. He said these are leftover materials. Hearing him talk today, it was clear his inspiration came from a lofty place.

"The posts came from a barn, and were hand hewn in the 1800s, around the same time period as Henry David Thoreau," Elwell said, as he worked on the cabin.

"What is this for?" he asked members of the group.

Thoreau is famous for his cabin on Walden Pond. He also wrote the essay, "Civil Disobedience" in 1845.

The Massachusetts State Police say they are fine with it, as long as protests stay civilized. They also say they will protect the company's right to work, since this project was approved by the Federal Energy Regulatory Commission.

"You don't owe anyone an explanation," said Capt. James Penniman to a group member who said, "we're just standing on private property."

"Some want to get arrested to express dedication to a cause and we're OK with that," he added. "We won't be happy arresting our fellow citizens, but we'll do what we have to do."

Up on Cold Spring Road, more police were ready, along with a paddy wagon, just in case.

The cabin began to take shape in the afternoon, as traces of snow came down, and now it might have to be moved.

Wherever the cabin sits, Ferla said the group hopes it will be a "catalyst" for an exploration of "our values as a society."

"What is our role when our government doesn't protect us?" she asked.

She said the group is a mix of retirees, and "people with jobs and reputations."

"For the time being we're willing to make sacrifices in those arenas of our lives," she added.