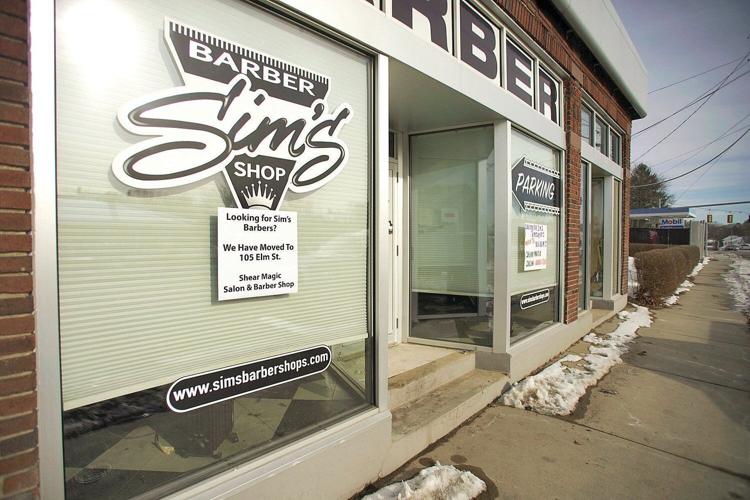 A sign seen Jan. 23 in the window of Sim's Barber Shop on Dalton Avenue directs customers of some of the barbers to another shop in town. The city foreclosed on the property last month for nonpayment of taxes dating back to 2007. 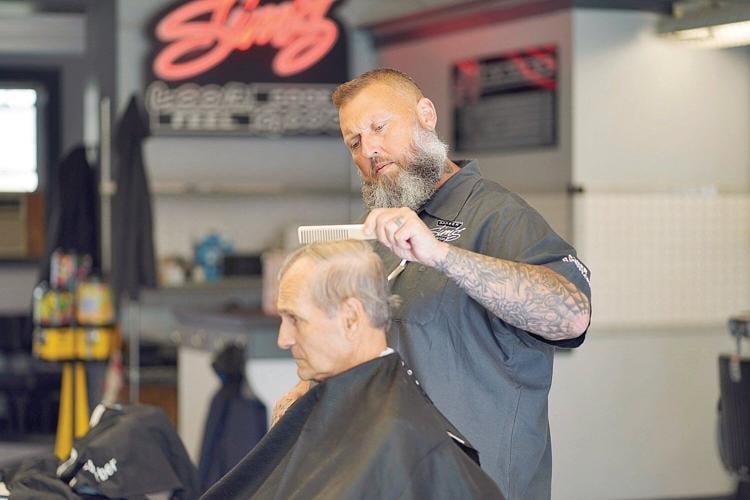 Barber Steve Vilot cuts the hair of a customer in 2018 at Sim's Barber Shop on Dalton Avenue in Pittsfield. The city evicted Vilot, the former owner of Sim's, last month after foreclosing on the property.

A sign seen Jan. 23 in the window of Sim's Barber Shop on Dalton Avenue directs customers of some of the barbers to another shop in town. The city foreclosed on the property last month for nonpayment of taxes dating back to 2007.

Barber Steve Vilot cuts the hair of a customer in 2018 at Sim's Barber Shop on Dalton Avenue in Pittsfield. The city evicted Vilot, the former owner of Sim's, last month after foreclosing on the property.

He's plied his craft at the Winter X Games, and worked at several music festivals, including Austin City Limits, Bonnaroo, Coachella and the Voodoo Fest.

But his nearly three-decade run as owner/operator of Sim's Barber Shop on Dalton Avenue has run its course. The city evicted Vilot from the building last month — more than a year after seizing the property on which he owed nearly $200,000 dating back to 2007.

By taking possession of the property, the city has settled its outstanding financial obligations with Vilot.

"He doesn't owe us anything," said city Treasurer Matthew M. Kerwood, "because we've taken possession of the property in lieu of that payment. We now own the property."

The city formally took the property in July 2018 after a nine-year dispute in state Land Court, Kerwood said, but the process allowed Vilot a year to reclaim his property. When he again failed to come up with the necessary funds, the city went to Central Berkshire District Court and received a judgment in October that required Vilot to legally vacate the premises.

But the city didn't follow through with the eviction until Jan. 13, which allowed the barbers who were working there to remain employed through the holidays. Four of those former employees have since found employment elsewhere.

Vilot believes he got a "very raw deal," particularly in light of his longevity as a small-business owner who ran two shops in the city and who made contributions to the community, such as free back-to-school haircuts for kids.

"The city never offered me any kind of break," he said. "I think in most cases as a small-business guy who had been in business for 29 years in Pittsfield, I deserved some kind of payment plan especially with the circumstances of what went down."

Vilot also operated a second Sim's Barber Shop in a rented space on North Street, which was closed permanently after it was damaged by a fire that destroyed the adjacent nearby A-Mart store in October. A third Sim's location in Great Barrington closed three years ago. He currently runs two barbershops in Tennessee.

Kerwood said Vilot owed the city a total of $198,238, including back taxes, interest and fees on two separate properties: 101-103 Dalton Ave., and a separate adjacent parcel on Dartmouth Street. A house that once stood on that parcel has since been razed.

The city began placing tax liens on Vilot's property in 2007, according to records on file at the city tax collector's office, and began the process of taking his property by tax title in state Land Court in November 2009, Kerwood said.

But all that time, Vilot said, he believed his bank was negotiating on his behalf to lower his interest rate, and he was caught by surprise by the tax lien.

"This was tied up in state Land Court for like eight or nine years," Vilot said. "It wasn't until about a year ago that I heard about anything."

He said the local loan officer he was working with ran into his own legal problems, so he didn't know how much money he owed the city.

Kerwood said liens that were placed on his property would have shown up on Vilot's tax bill.

"Failure to get a bill does not absolve you of having to pay it," he said.

During that process, the city was approached by Vilot through his lawyer "to basically enter into a purchase-and-sale agreement so he could redeem the property and retake ownership," according to Mayor Linda Tyer.

"Unfortunately, as this process went forward, he was unable to execute the necessary funds for the purchase-and-sale," she said.

Vilot said the city initially offered him a payment plan, but after unsuccessfully seeking assistance from "a number of banks," he couldn't come up with the money.

"As soon as they found out there was any kind of tax lien that just set off a flag," he said.

While the city now owns Vilot's property, what will happen with it is currently unclear. Tyer said officials can't do anything with the two parcels until the City Council grants the administration the right to dispose of the property.

She said the city is also considering having the council approve the disposal of eight other city properties, some that include vacant lots.

If the council approves the process, Tyer said the city can accept requests for proposals for the site, allow people to submit ideas about how to use the property, and determine how much prospective buyers are willing to pay for it.

"Or we could go straight to an auction," she said. "We haven't decided yet how to proceed."

Meanwhile, Vilot is currently the owner/operator of the Barber Authority, which has shops in both Lynchburg and Nashville, Tenn. He's owned the Nashville shop since 2017 and opened the one in Lynchburg last September, according to his LinkedIn page.

And he still cuts hair for VIPs and works at music festivals.

A Nashville newspaper referred to Vilot as "Trim Shady," a play on Eminem's nickname "Slim Shady," in a profile the paper published in June after Vilot worked at last year's Bonnaroo festival, which takes place annually in Tennessee.

Vilot said the two Tennessee shops aren't profitable yet because they just opened, and the financial compensation he receives from his side work wasn't enough to settle his debt with the city.

"It's not a huge money-making situation," he said.