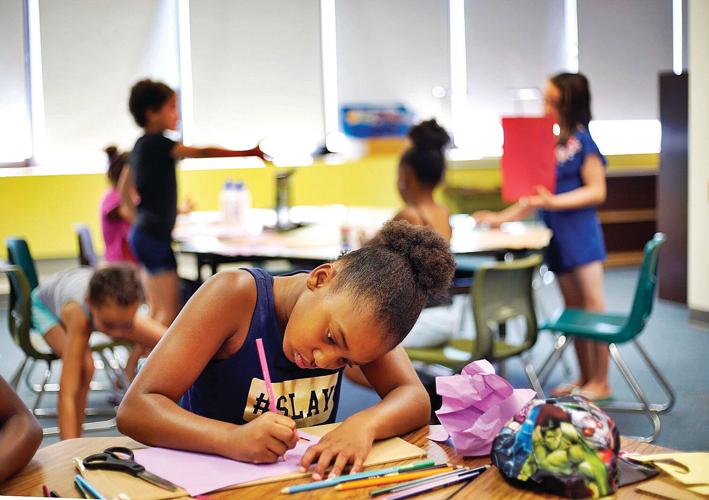 Nijayla Clark, 7, works on some art on the first day of the Marilyn Hamilton Sports and Literacy Program. 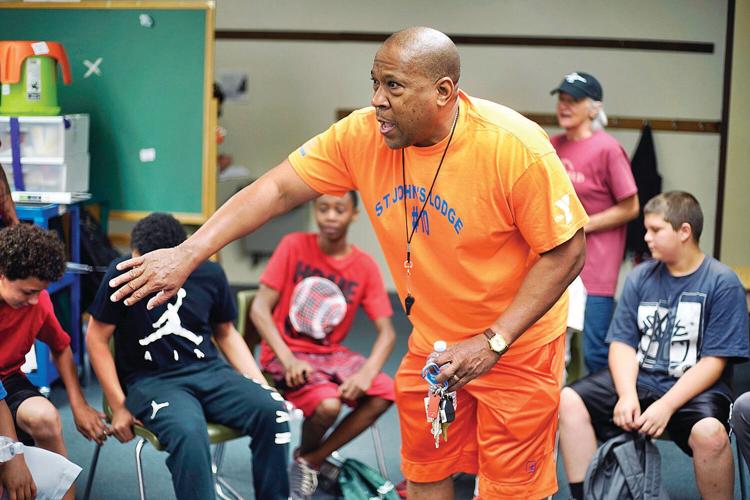 Manny Slaughter helps calm the chaos of the first day at the Marilyn Hamilton Sports and Literacy Program. 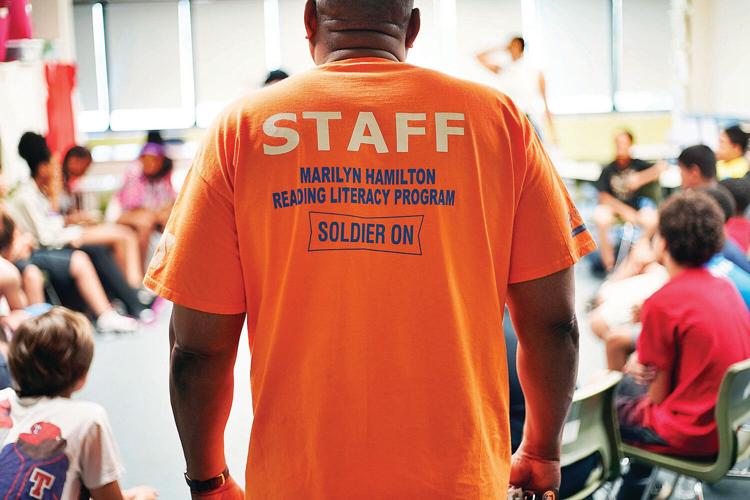 Manny Slaughter works on the first day of the Marilyn Hamilton Sports and Literacy Program, helping a new generation continue the works he started.

Nijayla Clark, 7, works on some art on the first day of the Marilyn Hamilton Sports and Literacy Program.

Manny Slaughter helps calm the chaos of the first day at the Marilyn Hamilton Sports and Literacy Program.

Manny Slaughter works on the first day of the Marilyn Hamilton Sports and Literacy Program, helping a new generation continue the works he started.

PITTSFIELD — Chris Harrington said his family didn't have much money while he was growing up on King Street, and for a time it didn't feel like he had much to look forward to.

But the summer camp started by Manny Slaughter and his wife, Vannessa Guess-Slaughter, fed him two meals a day, took him places he'd never been and "kept me out of trouble."

Now 28 and working as a counselor at the camp, Harrington said he hopes to give incoming kids the same thing the Slaughters gave him.

"I was one of those kids that didn't have direction until I came to a summer camp," he said. "I want them to look up to me."

That's exactly the type of evolution the Slaughters say they had in mind as they built the program two decades ago. They wanted to create a safe haven for city children, a free camp for kids that would take them places they might not otherwise get to go and a program that would show them love and respect.

"This is what we try to do," Manny said. "Give them experiences they've never had."

This summer holds a period of transition for the Marilyn Hamilton Sports and Literacy Program, which kicked off Monday, as the Slaughters pass off program management to the Christian Center.

They'll stay involved in the community, but from the full-time summer program, "we need a break."

The program began in 1997 when Vannessa started a summer dance program for her eldest daughter, Nya, and her friends. Then Manny decided to fold sports into the camp, and later they incorporated literacy with funding from Berkshire United Way.

At first, they said, they raised funds from friends and spent their own money in order to bring the kids places. Vannessa began teaching herself how to write grants using resources at the library.

"This started from the ground and look at it today," she said.

Vannessa said a delicate balance between love and discipline is the glue that's held the program together. Love has to shine through, she said, even in moments when you're "Sergeant Slaughter."

"Kids know — they know your heart," she said. "I don't believe in bad kids. Whatever behavior it is there's something special."

Shameka Brown said "Miss Vannessa" provided structure and compassion when she attended camp, and now she sends her three children to the program.

"She was hard on us about dancing, but she was like a mother figure," she said. "She was always there and had an open ear. That kept us from getting in trouble."

Manny and Vannessa's youngest daughter, Nyanna Slaughter, 22, is working this summer as the program's co-director. Growing up in the camp, she said, for her it's come to feel like one big family.

"They're all like my little brothers and sisters," she said.

Ellen Merritt, executive director of the Christian Center, visited different classrooms on the first day of camp making sure counselors had everything they needed.

"We're a good match with this program," she said.

The center will float the six-week program this year on a $42,000 budget. By mid-morning on Monday the camp had enrolled 75 children.

The late Marilyn Hamilton's sister, Cheryl Nolan, a former Christian Center director who volunteers with the camp, sat at a table at the entrance of Silvio Conte Community School on Monday as parents brought children in. She said the summer program grew out of a family feeling.

"The key is I treat them like my own children," she said, noting her own sons grew to be a police officer and a federal judge. "It's good to be able to help in the community."

Her sister-in-law Sandy Hamilton, who comes from California each year to work the program, said it's all about "community-family connectedness."

Nolan said she hopes new management continues the legacy without implementing too many changes.

Merritt said she won't go making changes for change's sake, but will take a look at the program with an eye toward improvements. While "some of the bells and whistles might be different," she said, she intends to honor the "passion, blood, sweat and tears" that the Slaughters put in.

"These are our kids," she said. "And I'm glad to see this collaboration in action."

The Slaughters said when they took children on trips, it was always a thrill to watch their faces. Tearing up, Vannessa said she gets chills thinking of the awe in their expressions.

"You know they'd probably never see anything like that," Manny said, listing trips like those to Broadway, the Bronx Zoo and Fenway Park.

They said the children often drew compliments for their behavior on trips.

"Kids don't know how to act unless you take them somewhere," Vannessa said.

The gratitude the kids continue to show, Manny said of his years volunteering, is "where I got my pay."

They started the program casually, they said, and then they couldn't stop. Each year, kids kept coming back — often with another cousin or friend in tow.

Manny and Vannessa joked about how it often seemed like their program gobbled up all the kids in the city's West Side. When it came to signing up kids and lining up funds, Vannessa said their reputation preceded them.

"The trust factor was really important," she said.

There were no mail-in applications for the summer camp, Vannessa said. They collected paperwork in person.

"That's why the program was successful," she said. "Because we were able to go out into the community. You gotta meet `em where they're at."

Vannessa said transparency is crucial as they hand the program off to the Christian Center. She said she hopes others in the community continue to take up the torch she and Manny lit two decades ago.

"That's your community, if you need something," she said. "You don't need me and Manny."

She said the city has everything it needs to lift itself up.

"There's a lot of really powerful people in this community," she said.