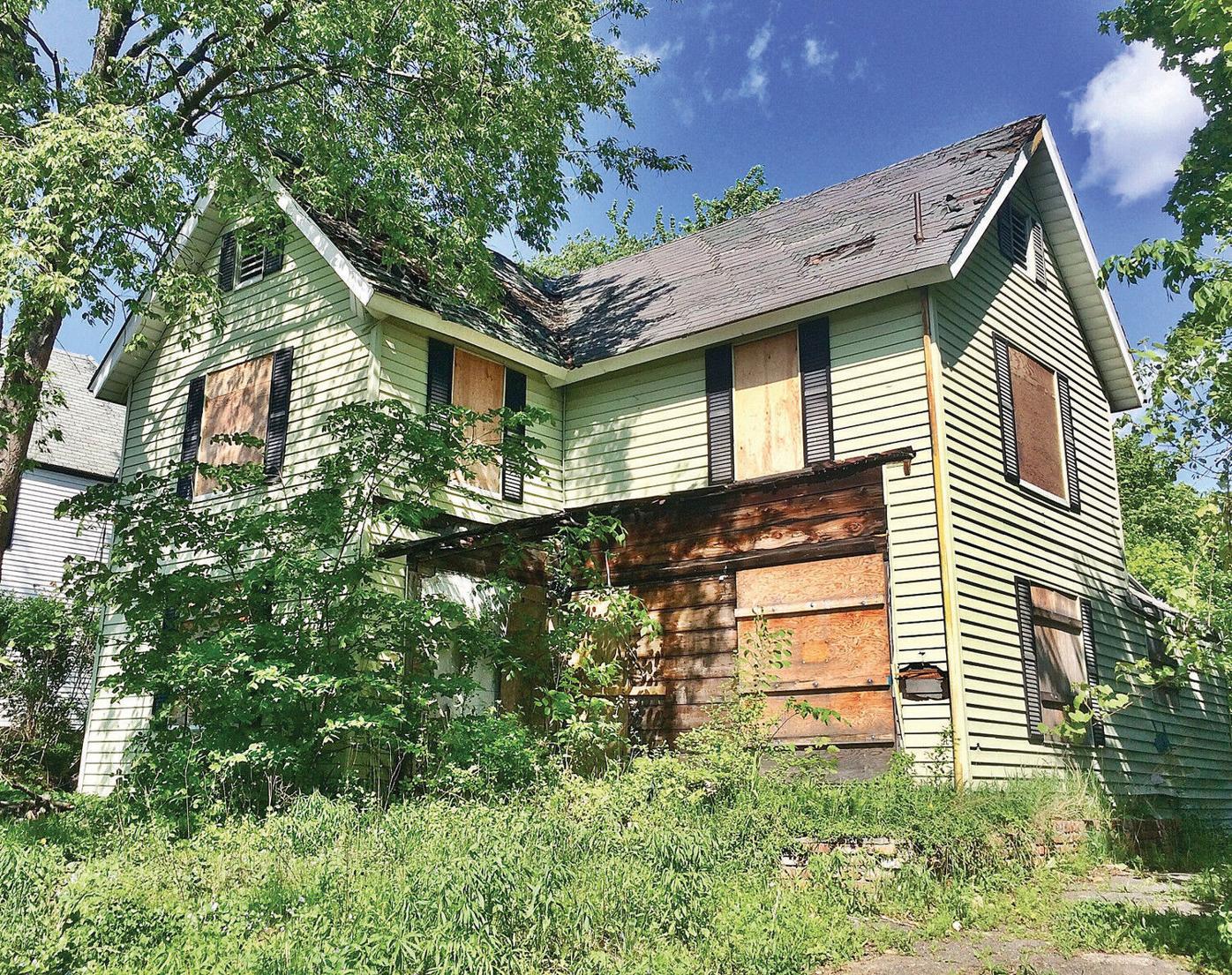 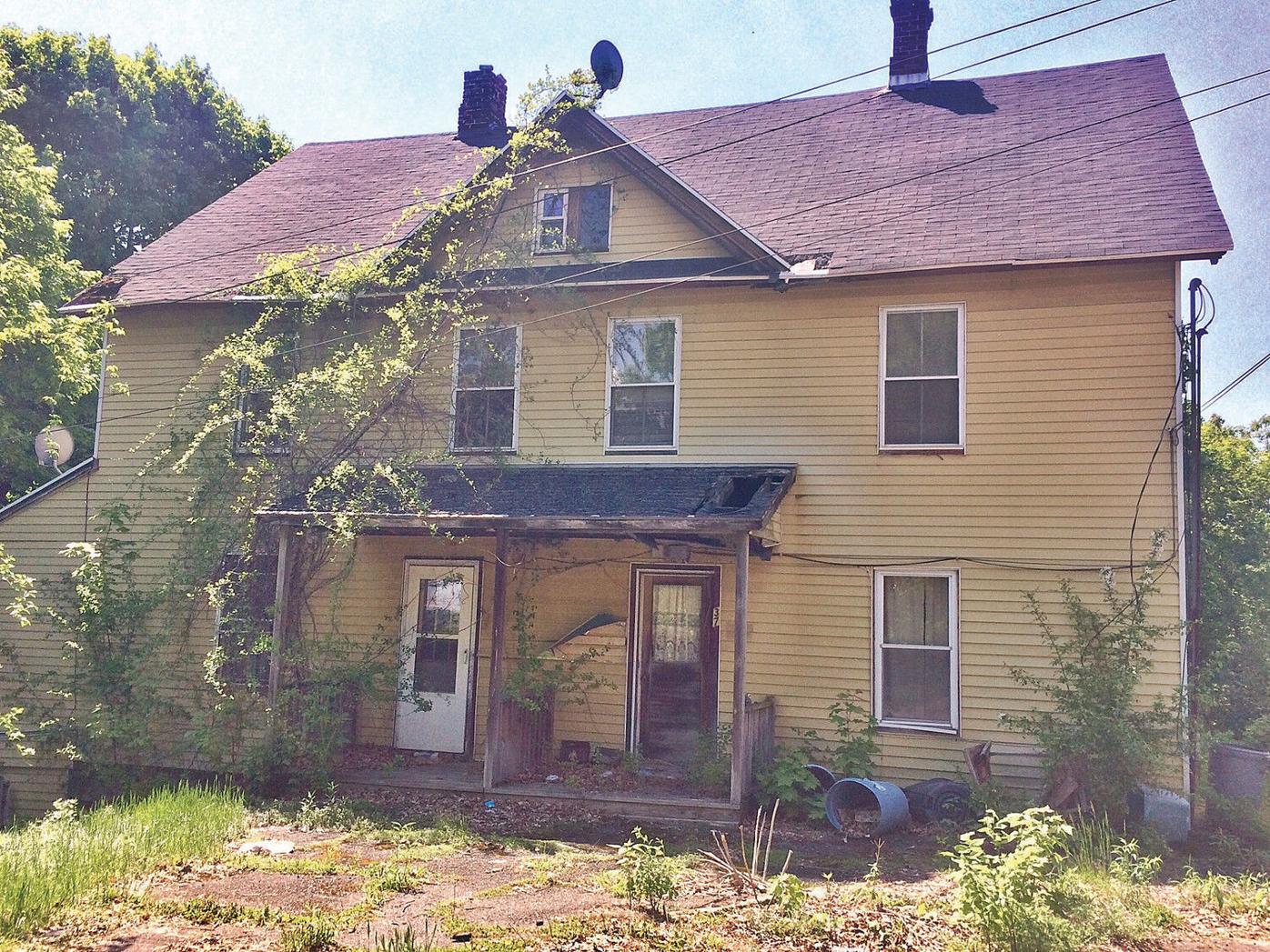 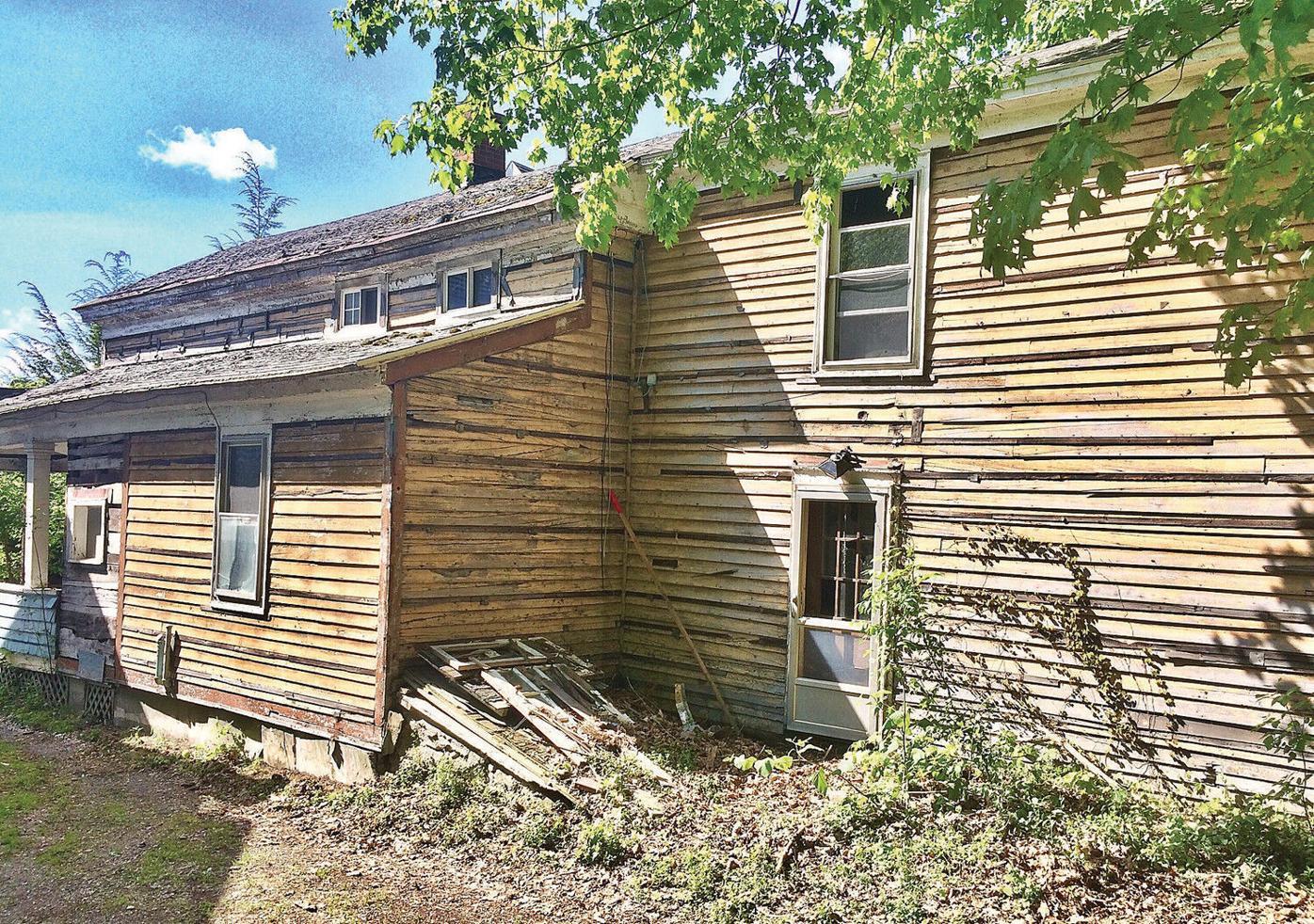 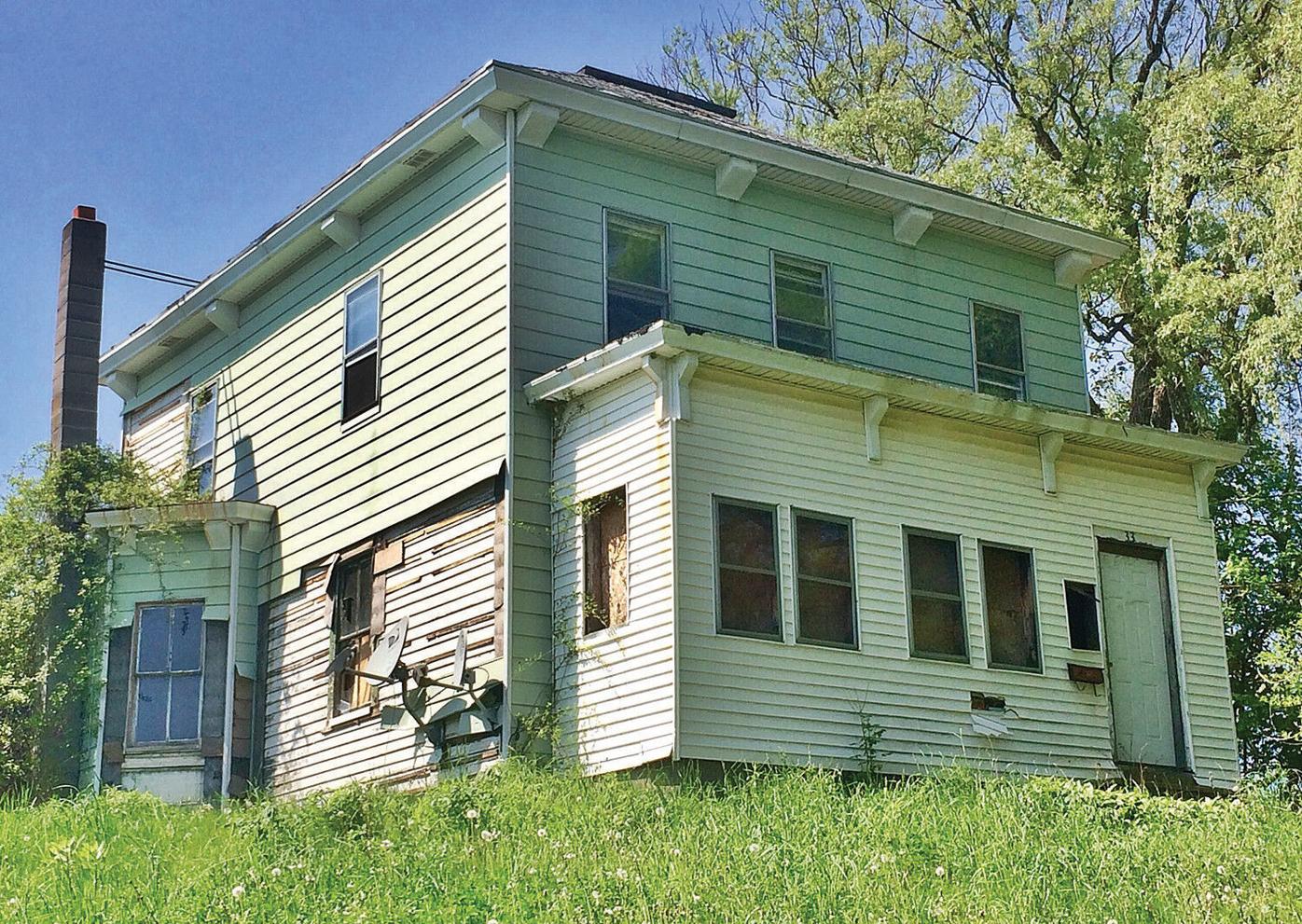 Residents who live nearby welcome the knockdowns.

"All of them need to be taken down," said Dave Romano, who lives near an abandoned two-story home at 35-37 Circular Ave. just west of downtown.

"A lot of the empty houses people are using for drugs," he said.

In coming weeks, demolition crews will level that Circular Avenue building, which is being attacked by vines and whose back porch has fallen away.

Also to go: 14 Parker St. in the Morningside area below Tyler Street, and 33 Francis Ave. and 11 Goodrich St. on the West Side.

The targets lie in neighborhoods beset with vacant properties and were chosen based on information gathered by Pittsfield's Code Enforcement Team, according to Tyer's office.

That team meets monthly and includes representatives from the fire, health, engineering and building inspector's departments. Also weighing in are staff from the community development, purchasing and city solicitor's offices.

Demolition is considered a last resort, after efforts by the city to get property owners to care for their buildings and preserve housing stock.

"You can tell if the owners are going to be responsive or not," said Laurie Mick of the Community Development Department. "The city gives the property owner every opportunity to do the right thing."

Before getting on the demolition list, the properties racked up unpaid taxes, were condemned and their owners were ordered to have them demolished.

Failing that, the city will pay $175,700 to Associated Builders of Springfield to remove the buildings, then place liens on each of the properties for expenses incurred.

The vacant lots will remain in the same owners' hands.

The demolitions pick up on six properties taken down in 2017, including homes and buildings on the West Side. Up to a half-dozen more removals are planned for 2019, Mick said.

Work is paid for through the city's Community Development Block Grant funding.

When asked about plans to remove 35-37 Circular Ave., residents of the neighborhood had the same question: What about 33 Circular Ave.?

Sure enough, right next door, on this airy promontory that affords views both to Mount Greylock to the north and hills south of the city, sits another darkened hulk.

Two sisters-in-law, Teresa and Dorothy Dascani, both in their 80s, recall better times on Circular Avenue, where their family members owned a half-dozen homes.

"It's better if they get them down, that's how I feel about it," said Teresa Dascani, who joined Dorothy on the latter woman's front porch, gazing up the street toward the two-story yellow house, owned by Mary Williamson, that's now in a wrecking company's crosshairs.

Bumblebees were probing holes that have emerged in its roof. Plastic bins litter the front yard and mailboxes once affixed to the building have been torn loose. Down back, where the land slopes away, a pile of wood is all that remains of a deck. A rear cellar door has been forced open.

Steps are being taken in Land Court against the property, which has accrued $58,430 in back taxes, including delinquencies that date back two decades.

"It's an eyesore," said Romano, who lives with his brother across the street from the Dascani family.

In her 65 years in the close-knit neighborhood, Dorothy Dascani witnessed good times on streets that were an easy walk into town. People took care of their homes and watched out for one another.

They still back each other up, she said, but too many houses have fallen into disrepair.

"That was a beautiful house," Dorothy Dascani said of another now derelict property not yet on a demolition list. "They let it go."

The abandoned properties, she believes, scare away people who might help revitalize the neighborhood, or simply call it home.

"If you don't demolish it, people don't want to rent around here," she said.

Around the corner from 35-37 Circular Ave. sits another property on the demo list: 33 Francis Ave. It occupies a lush lot with a commanding view across West Street below and to southern hills.

But the green and white building itself is not much to look at — to the dismay of its closest neighbor, the Elizabeth Freeman Center. The program assists victims of domestic violence.

Janis Broderick, the center's executive director, has kept an eye on the property's slow demise, aware of illegal dumping on the site and unlawful use.

"It will be a lot safer," she said of the demolition. "There has been activity there. We've seen people there at night."

Though some windows are boarded, a visit last week showed trampled grass and other signs of activity amid wreckage strewn around the site, including mounds of asphalt shingles.

Like most abandoned homes, windows at 33 Francis allow glimpses in to sorry endings that played out inside: heaps of belongings, often including toys, pawed through by later visitors.

The owner of record, the estate of Tommie Purry, is behind on $17,736 in taxes and was ordered to demolish the house in 2016.

A few miles away, east across North Street, 14 Parker St. sits near the south end of the street, across from rental properties at the edge of the former General Electric Co. plant. But the street is also home to taxpayers who have lived on Parker Street for decades.

One is Corinne Keegan, who paused outside her home the other day to recall the family that last lived in the house about to fall.

"I miss the people who used to live there," she said. "It just makes me want to cry a little bit."

Keegan said her children, now adults, used to play with kids who lived at 14 Parker. "They were great, decent people who were great friends."

The owner of record is Sandra Phelps. A credit union holds a mortgage on the property. According to the city, the credit union has held off on foreclosure because of the property's condition. It was condemned in April 2015 and its owner received an order to demolish in June 2016.

Keegan believes the home has been empty for years. It was added to the city's roster of vacant buildings in 2015.

Right after her friends moved out, vandals moved in, stripping the home of its copper piping.

"I'm pretty sure there were a couple of people living there," Keegan said of squatters.

One of the properties about to fall hides on a sliver of a lot off Goodrich Street, just a block west of South Street.

At first glance, 11 Goodrich St. looks like a 19th-century gem in need of landscaping, since bushes conceal its face like a woolly turtleneck.

But the wooden structure, owned by Erik Erkkinen, is in mid-collapse. Its porch is missing pieces. Inside, insulation droops from ceilings.

The city lists $20,451 in delinquent taxes on the property, which joined the vacant building list in 2009 and was condemned in April 2015.

Last week, children were playing outdoors on the property next door, feet from the building.

Across the street, Michael Hicks, having finished his landscaping shift, was relaxing in the shade on the porch of the house where he rents an apartment. A wall of greenery masked the distress on the other side of Goodrich.

"You can't even tell there's a house there," he said of the condemned site.

But neighbors are well aware of it. A crew came recently to dig up a square of pavement to seal off 11 Goodrich's utility connections.

People have been talking, wondering whether the demolition will close the narrow street and if so for how long.

"The biggest worry is asbestos being released," Hicks said.

Last year, the same neighborhood watched as 14-18 South Church St., a stone's throw from the Goodrich property, was leveled.

In all, the city paid Jay-Mor Enterprises Inc. $215,300 to handle those demolitions.

This year's demolitions are expected to be completed by June.