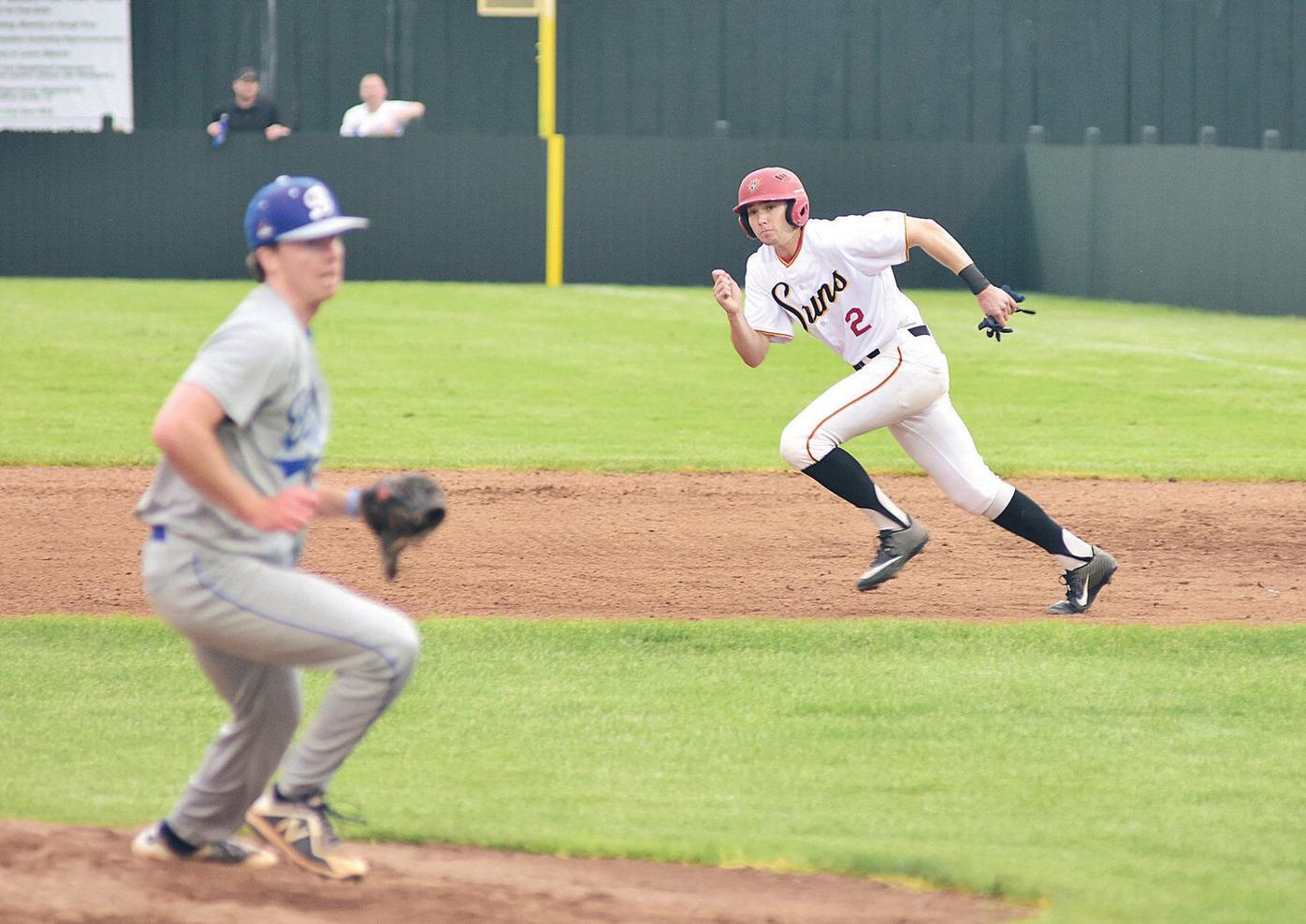 Pittsfield Suns' Kyle Cronk runs after the pitch during a game against Bristol on opening night at Wahconah Park on Thursday night. 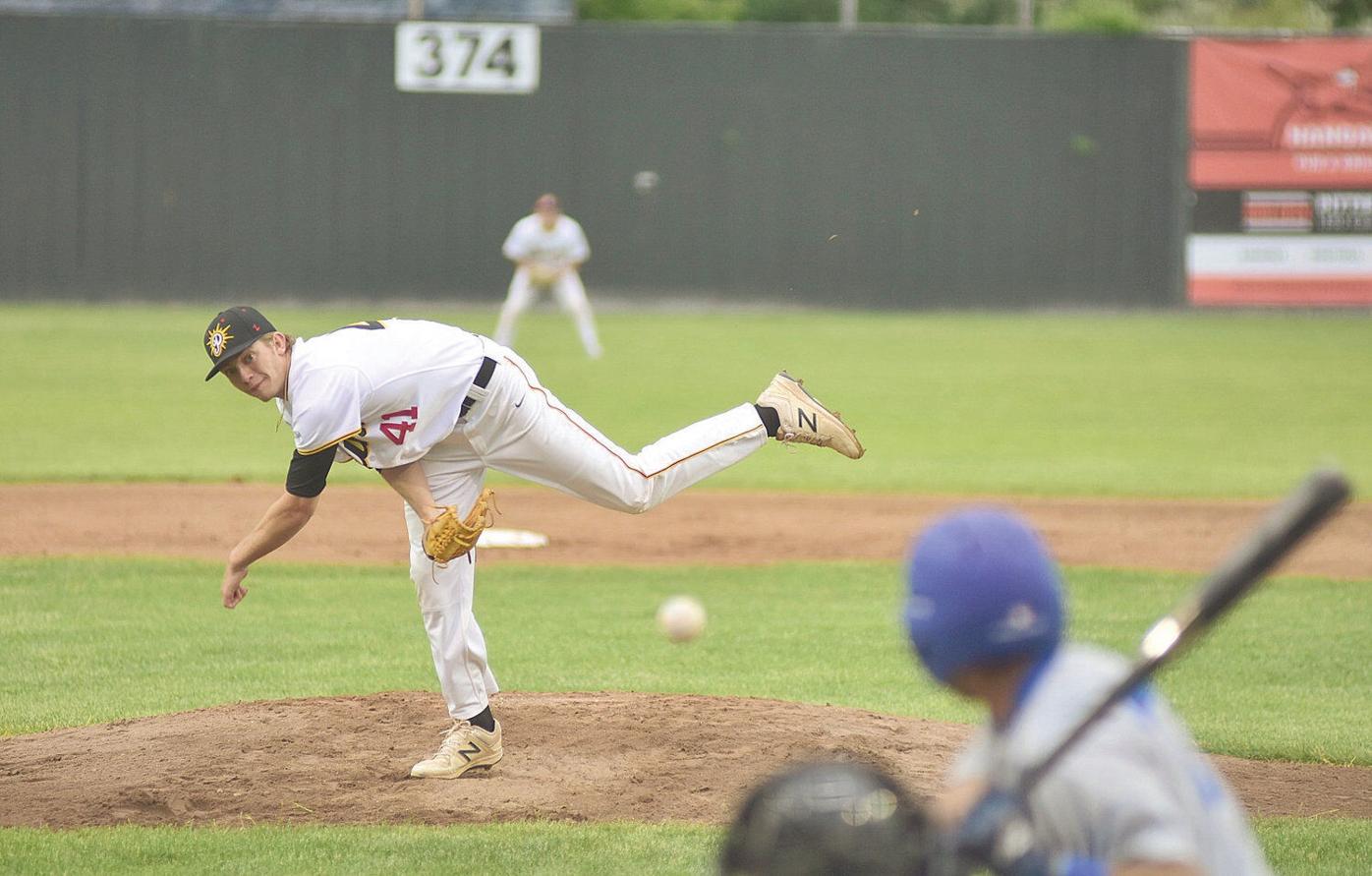 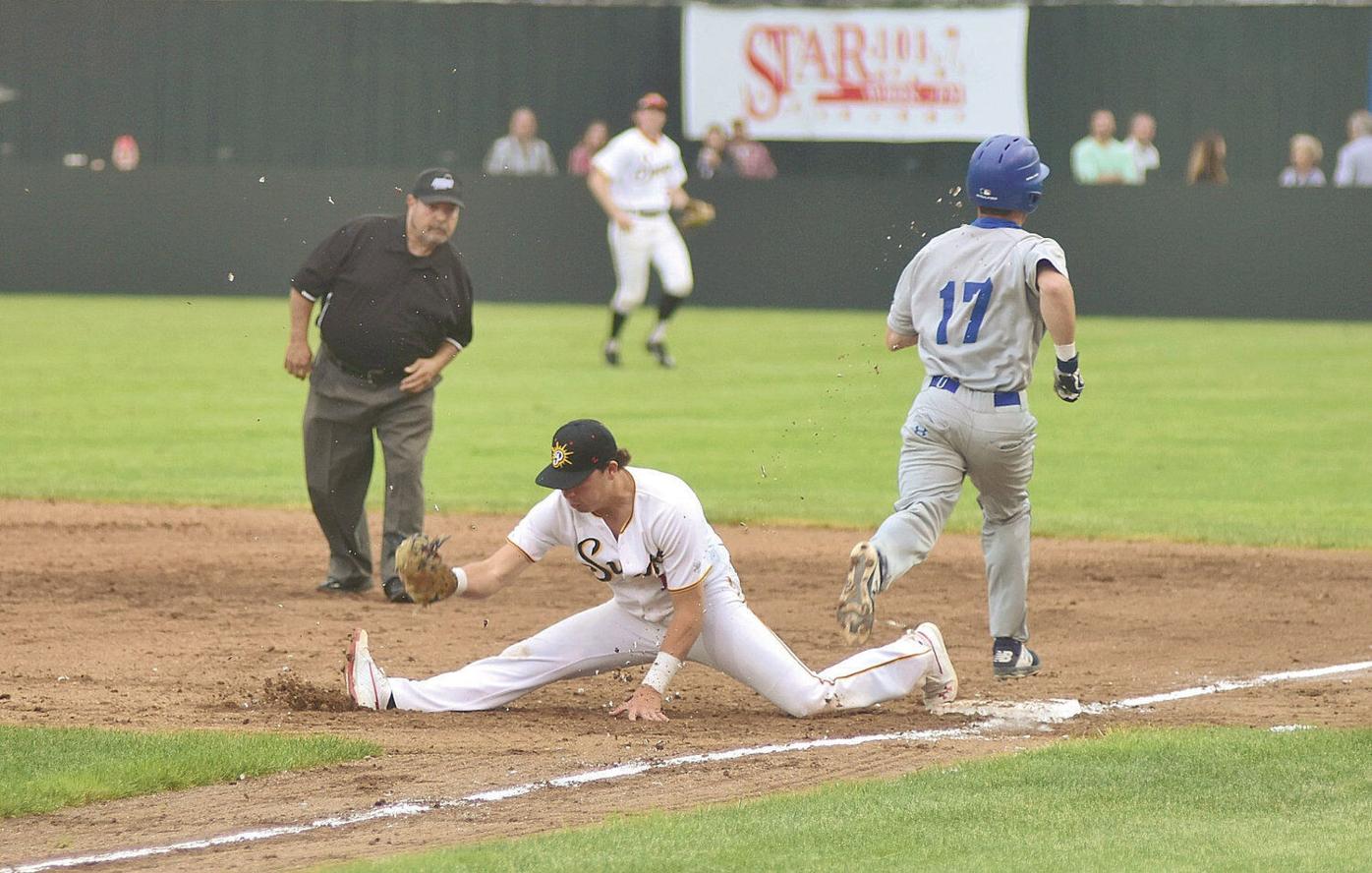 Pittsfield Suns' Kyle Cronk runs after the pitch during a game against Bristol on opening night at Wahconah Park on Thursday night.

PITTSFIELD — Rain forced postponement of the post-game fireworks at the Pittsfield Suns' opener on Thursday night. The Suns set off a few fireworks of their own, however, winning in a walk-off.

Kyle Cronk scored from second base after Mark Coley's grounder was misplayed for a two-base error, which capped off a three-run rally as the Suns beat Bristol 3-2 in their first game of the Futures League season.

The Suns had two Jack Cooney singles over the first eight innings, but parlayed two hits, a hit-by-pitch and an error into three runs that sent the 1,219 soggy fans home happy.

"We were a little quiet for the first eight innings," said Cooney, the former Taconic standout who just wrapped up his second season at Springfield College. "We did what we needed to do to pull it together, some clutch hitting and we came out with the 'W' today."

Bristol starter Jack Moore and reliever Dominic Niman had dominated the Pittsfield hitters through eight innings. Moore gave up one hit through six frames with eight strikeouts, while Niman struck out three, walked one and gave up one hit in two scoreless frames.

Will Nowak, the third Bristol pitcher, struck out Matt Malcom to open the ninth and Jack Khawly followed with an infield single. Pittsfield's Dan Baruch, who flashed some serious leather at first base all night, took first when a pitch got away from Nowak and skimmed off the Boston College commit's helmet. The runners moved up when Andrew Fernandez grounded back to the pitcher.

Kyle Cronk was the next batter, and he swung at the first pitch he saw. The ball found the gap in right center. Cronk ended up on second with a double that plated Khawly and Baruch, tying the game.

Coley swung at a 1-2 pitch, and the slow roller headed toward shortstop. Blues shortstop Brogan Searle-Belanger had to rush his throw. The ball got away from first baseman Kasey Bass, and that allowed Cronk to scamper home with the winning run.

"It got the job done," said Coley, an outfielder at Rhode Island who had to play second base Thursday. "I used my speed to force the error. I knew it would be something slow, because I swung at two changeups in the dirt. I was telling myself to stay back and drive it."

The ninth-inning heroics by the Suns cast some outstanding pitching performances into the shadows.

Moore, a right-hander from Emory University, gave up an infield hit to Cooney in the third inning and then retired the final 12 batters he faced.

As good as Moore was, Pittsfield lefty Alex Price nearly matched him pitch-for-pitch. The Middlebury pitcher gave up two runs on six hits in five innings. Price did load the bases in fourth but gave up only one run when he hit Jordan Laske with the bases loaded. In the fifth, Price gave up three straight hits for another run, but retired the side in order. He was aided by a stellar defensive play by Baruch, who dove to his right to rob Bass of extra bases.

"Alex was good. He threw 70 pitches through five. He could have thrown less, but there were a couple of weird plays. The infield grass slowed down a lot of stuff," Gedman said. "He didn't panic, to get us through [the fifth] inning and keep us down 2-0, he did his job."

Price wasn't the only Pittsfield pitcher who did his job. Langford retired all six hitters he faced in the final two innings, following up Jared Henry's performance.

Henry, a right-hander from Southern Connecticut by way of Monument Mountain, pitched two strong innings of relief. He gave up a hit and hit a batter, but nobody got into scoring position. Henry struck out Danny Roth swinging to end the seventh, and wrap up a solid relief appearance.

The Suns announced that the fireworks night will be rescheduled for June 7.

Gedman said after the game that Jon Morrison from Rhode Island and Matt Clarkin of Holy Cross will each go around four innings in Friday's road game at Westfield. Jake Kodros from Broward College is slated to start Saturday, while Kelvin Sosa from Wesleyan will pitch Sunday.