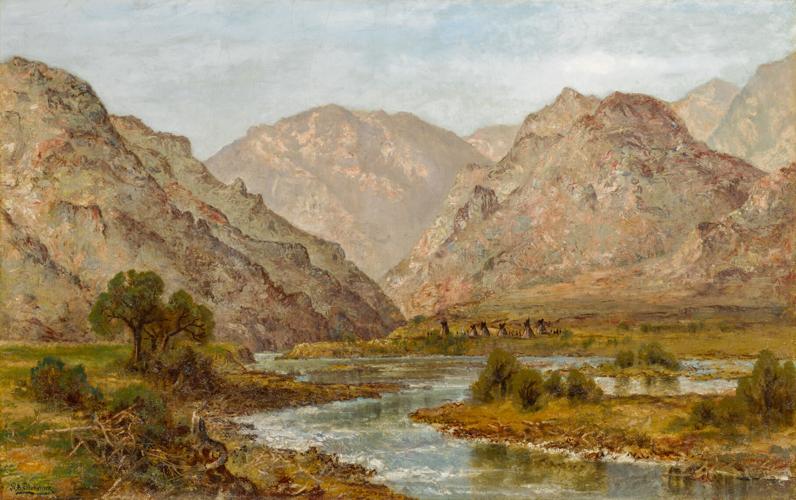 The painting "Rocky Mountains" by Ralph Albert Blakelock was donated to the Berkshire Museum by Zenas Crane in 1915. This and many of the 40 works headed to auction in the coming months were among masterpieces that Director Laura Bragg spared in 1935 when she sent to auction 25 paintings of "lesser quality." 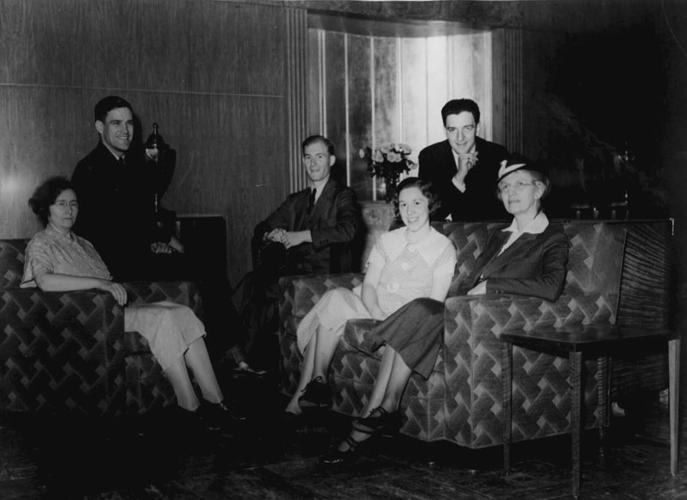 The painting "Rocky Mountains" by Ralph Albert Blakelock was donated to the Berkshire Museum by Zenas Crane in 1915. This and many of the 40 works headed to auction in the coming months were among masterpieces that Director Laura Bragg spared in 1935 when she sent to auction 25 paintings of "lesser quality."

PITTSFIELD — "We were astonished when over 20 paintings were sent to New York to be auctioned off. We were grieved when our beloved Berkshire County mementos and cherished local curios were disposed of. We want to make a protest and an appeal that such wanton destruction of valuable educational objects shall be stopped. Many of the things destroyed cannot be replaced."

That passage came from letter published in The Berkshire Eagle on July 22, 1937, and bears striking similarities to those being written about the planned sale of 40 works of art from the museum's permanent collection.

The letter, written by a former employee of the Berkshire Museum, Miss Alice Peirson, accused then-Director Laura S. Bragg of selling artwork given to the museum by its founder Zenas Crane and in general, of ruining the overall museum.

Over the years, the Berkshire Museum's collection, and its mission, have shifted. And those changes have been marked by turbulence in the community over the artworks themselves and the museum's leadership.

The most recent dust up came in response to the museum's July announcement of a proposed $60 million reinvention, which called for the creation of at least a $40 million endowment and an extensive renovation of the 114-year-old museum, with a new emphasis on science and history as a way to ensure its future.

The museum's "New Vision Plan" would be funded by the sale of 40 of the museum's prized artworks estimated to fetch at least $50 million at Sotheby's. The artwork slated for auction includes two Norman Rockwell paintings, donated by the artist himself, and works by artists of the Hudson River Valley School and paintings Zenas Crane personally picked for the museum.

At the time Peirson wrote her letter, the museum had just undergone a transformation of sorts. Bragg, who served as director of the museum for eight years, from 1931 to 1939, was brought to Pittsfield in 1931 by Z. Marshall Crane and Frances Crane Colt, to oversee the reorganization of the museum their father, Zenas Crane, had founded.

It was their intention to have Bragg re-envision the museum's holdings as a cohesive and comprehensive collection with educational applications.

Although the Cranes had no direct influence over the day-to-day running of the museum, they made a sizable donation to fund Bragg's position, as well as additional museum staff. At the time of the donation, the museum was still part of the Berkshire Athenaeum and Museum, and was run by the library's director. The museum's "curator" was a member of the library staff.

Bragg began overhauling the museum's collections shortly after her arrival, which included numerous donations from the general public, made both to the museum and the library, pieces from the Athenaeum's galleries and substantial donations of art and natural history items from Zenas Crane and his family. Crane's contribution to just the museum's art galleries, at the time of his death, totaled somewhere between 80 to 100 works of art.

Those paintings, all of which are headed to auction in the coming months, were held in high regard by Bragg. In 1935, she sent to auction 25 other works donated by Crane, which she deemed to be "not in line" with the collection or of lesser quality.

Peirson's criticism of Bragg and the board of trustees was not a revelation. Bragg and the board had come under public fire two years earlier, when it became public knowledge that she had sold George Caleb Bingham's "Raftsmen Playing Cards" to the City Museum of St. Louis.

Robert H. Seaver, former faculty manager of the former Lebanon School for Boys (now the Darrow School in New Lebanon, N.Y.), became one of Bragg's biggest critics after viewing Bingham's work, one of his favorite paintings from the Berkshire Museum, as part of an exhibition at the Modern Museum of Art in New York City. The painting was then on loan by its new owner.

Seaver, who had already expressed his dissatisfaction with the painting's removal from the walls of the Berkshire Museum, was not happy to learn that it had been sold.

"The question came into my mind of how a painting, which was not worthy of storage in a Pittsfield cellar could be suitable for display on the walls of a New York gallery," he wrote in a February 1935 letter published by The Berkshire Eagle.

Bragg, in an interview with The Eagle, stated the painting was not "in line with our regular work or with our policy for showing the development of American art" and that the museum's policy was "to carry the development of art through the English school of portrait painters, through early Americans, and thence through the so-called Hudson River School to modern American art. The Bingham fell outside this channel."

The sale, done with the full backing of the board of trustees and of the original donor, Countess Du Besse, supported the acquisition of items to fill in gaps in other parts of the museum's collection, including the purchase of a Greek marble relief and the bulk of the museum's Chinese prints.

Seaver also accused Bragg of selling off "Les deaux soers" (La Bourrique), also know as "Horseback Ride," by William Adolph Bouguereau, donated by Winthrop Murray Crane in 1903. While Bragg and the trustees never entertained Seaver's accusations with an answer, Bragg did state on several occasions that the Bingham sale and any others were part of the museum's annual reports.

Seaver, who claimed he was told of the sale by a museum trustee, was wrong. "Les deaux soers," was not sold at auction in 1935. The painting and a second by Bouguereau, "L' Angeau Nouveau-ne" (The Newborn Lamb), also known as "The Shepherdess," are among the 40 artworks identified for sale by the museum. The Bouguereaus are slated to go to auction on Nov. 21.

Peirson, an employee under Bragg for six months of a 15-month stint at the museum, resigned prior to any art being sold. Although her accusation that the museum sold off part of its art collection was true, it was done with little fanfare in 1935.

On Feb. 9, 1935, The Eagle ran a small article stating that several of the museum's paintings, taken from the storage vaults, were sent to auction in the Plaza Art Galleries in New York City. The article quotes Bragg as identifying the works as all being from the 19th century "pictorial school" and all being canvases originally donated by Zenas Crane.

If anything, Peirson's attack on Bragg could be seen as rubbing more salt in a wound. Bragg, the first female director of a publicly funded museum in the country, had been a controversial choice to lead the museum from the first day she arrived.

Not only did she oversee the reorganization of the museum's collections, but she had encouraged the split of the museum from the Athenaeum and oversaw several building renovations. She also tucked away a majority of the museum's local treasures, including the sledge Robert Peary used to explore the North Pole and pieces from a plane flown by the Wright Brothers, in favor of modern art exhibitions.

In 1933, Bragg put together an exhibition of work by four local artists, including then-unknown sculptor Alexander Calder and Park Avenue cubist George L. K. Morris, both summer residents of the Berkshires. The exhibit was a first for both Calder, of Richmond, and Morris, of Lenox, by a museum. Both would go on to gain fame in their respective fields.

Bragg would purchase two of Calder's works for the museum — "Dancing Torpedo Shape" and "Double Arc with Sphere," also known as "Arc and the Quadrant" — that same year. The mobiles, which were the first of Calder's works to be purchased by a museum, are among those works slated to be sold by Sotheby's in 2018.

Bragg resigned from the museum in 1939, returning to Charleston, S.C., where she had been director of the Charleston Museum prior to her move to Pittsfield. She was replaced by Stuart Henry, the curator she had hired in 1931.

Henry would befriend Stockbridge artist Norman Rockwell, who gifted two of his own paintings, "Shuffleton's Barbershop" and "Blacksmith's Boy — Heel and Toe" to the museum. The paintings, which go to the auction block separately on Nov. 13, are expected to raise between $27 million to $40 million.