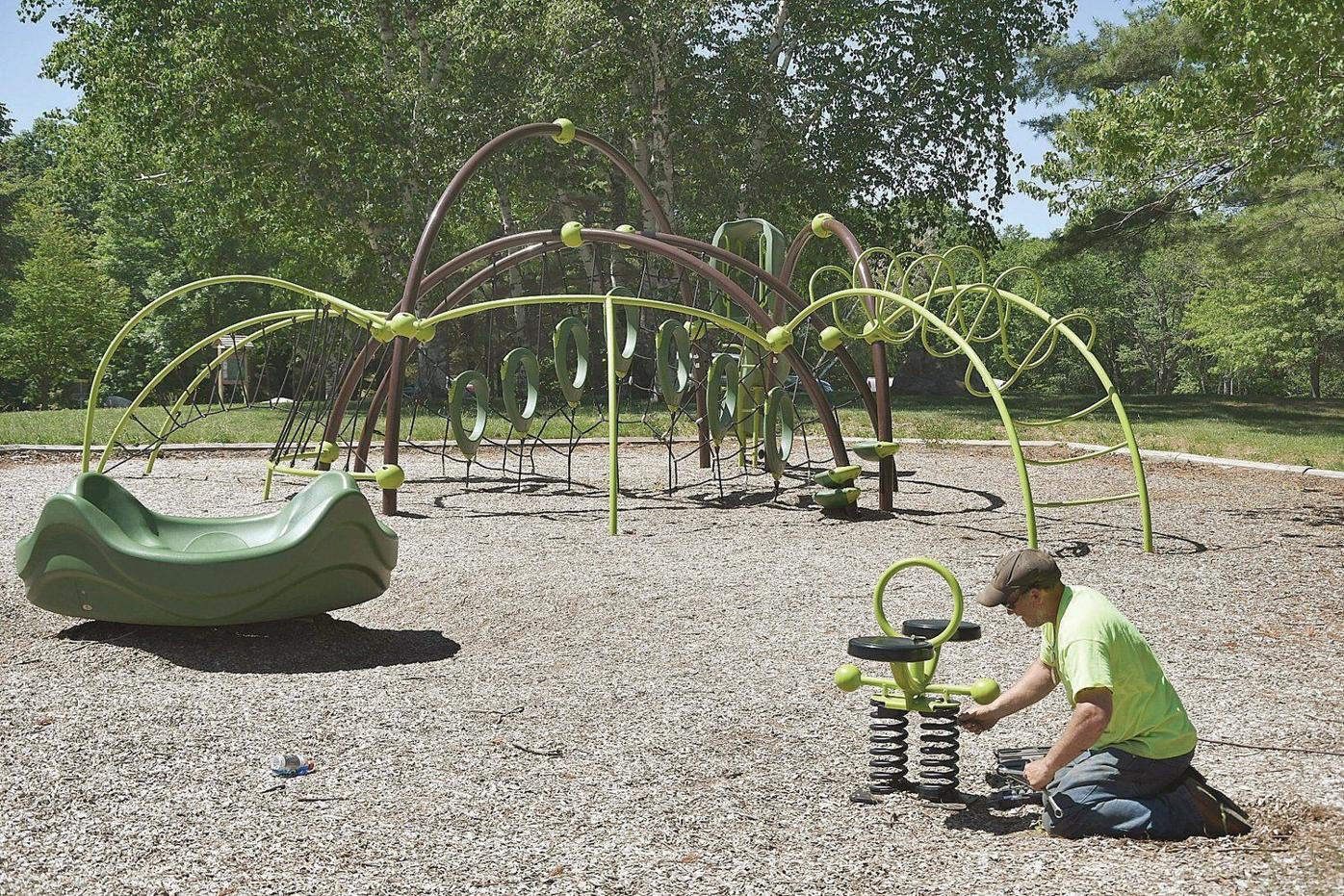 Bob Lemaire of the North Adams City Parks Department repairs a "see-saw spring rider" June 17 at the playground at Windsor Lake in North Adams. Now that playgrounds and parks are open, equipment is being maintained and a cleaning schedule will mandate that play areas are sanitized three times a week. 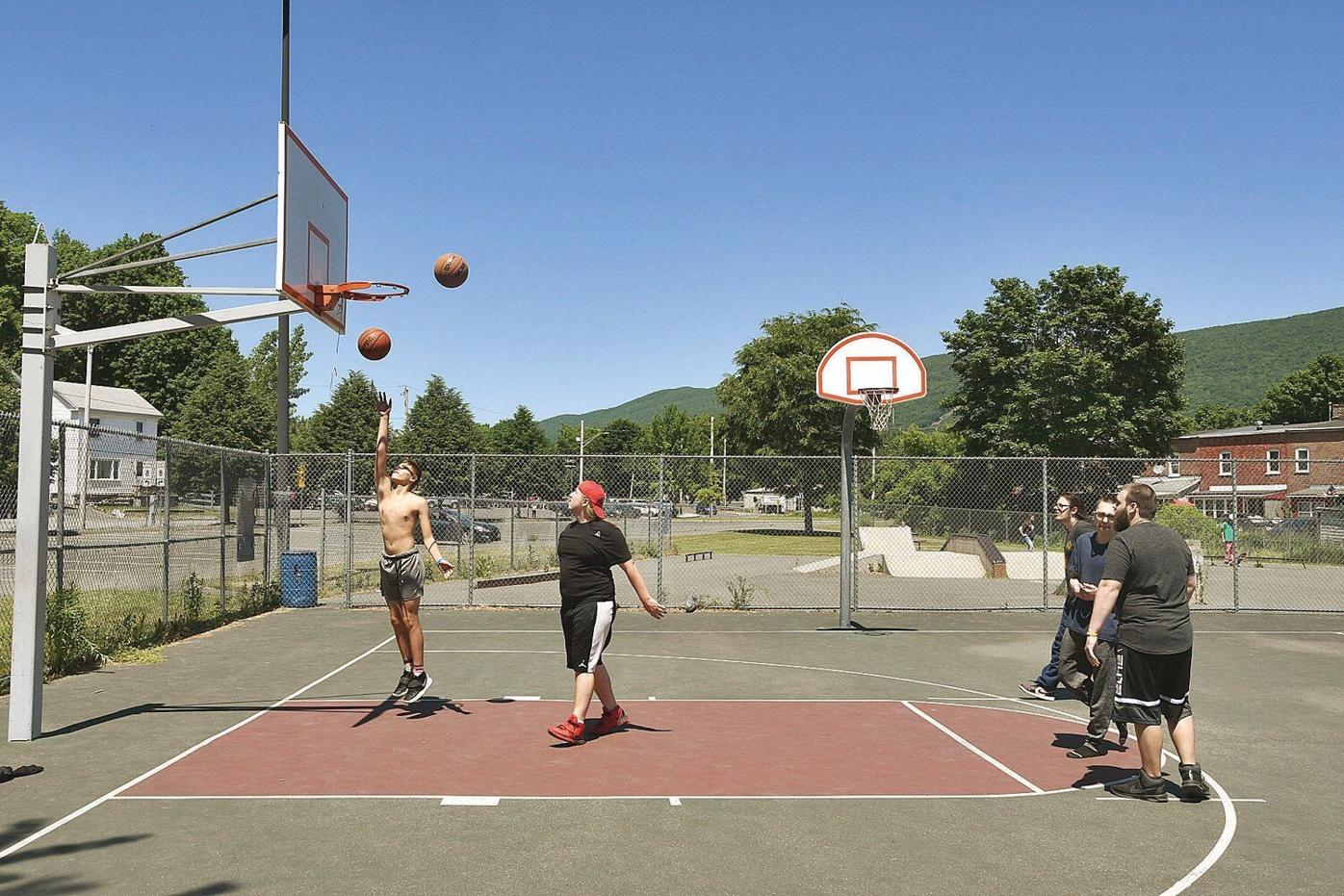 Youths play basketball on the court at Renfrew Field in Adams. The court was closed and the rims removed to combat the spread of COVID-19, but it has since reopened. 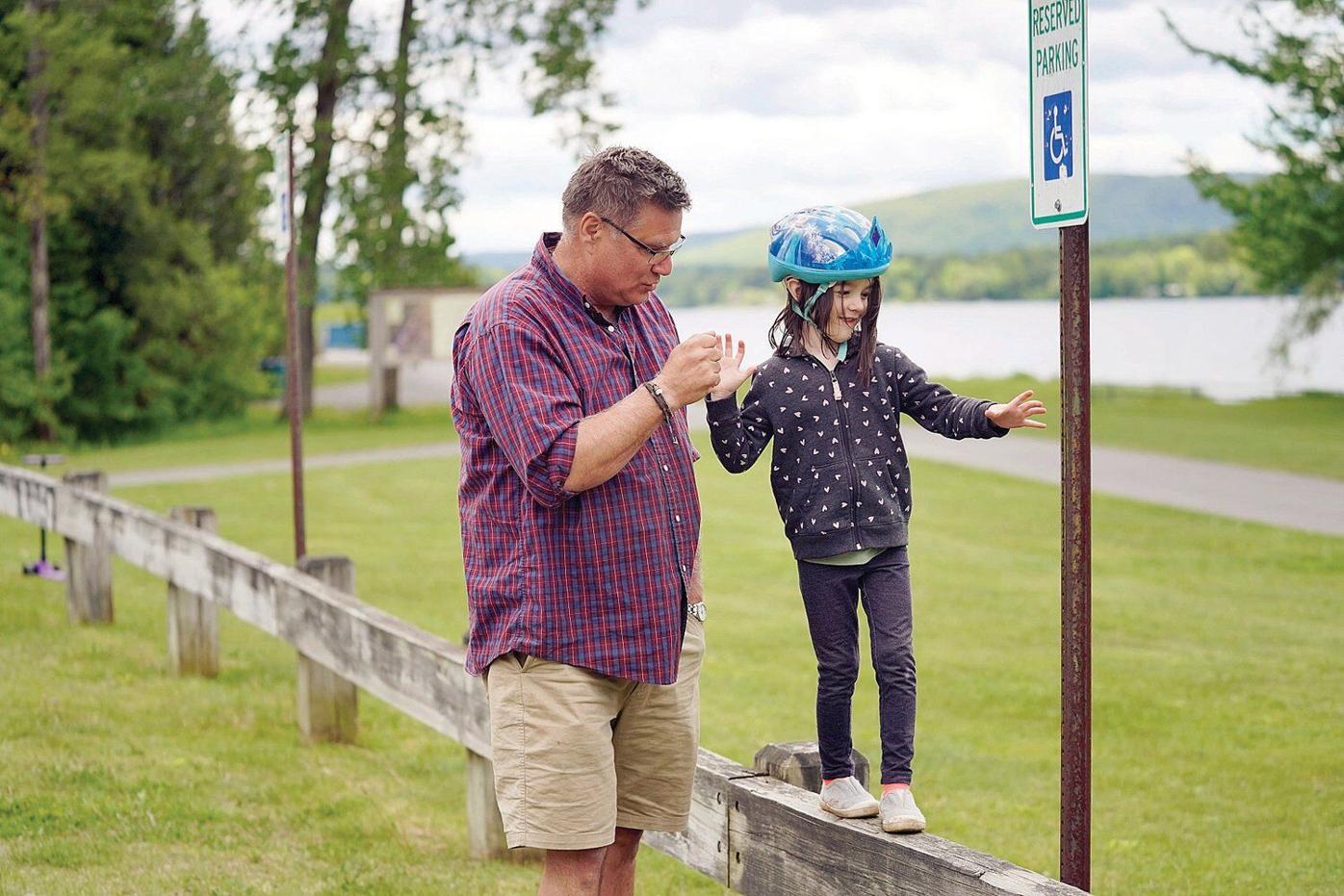 Chris Adorno and his granddaughter Julia LeClair play at Burbank Park in Pittsfield.

Bob Lemaire of the North Adams City Parks Department repairs a "see-saw spring rider" June 17 at the playground at Windsor Lake in North Adams. Now that playgrounds and parks are open, equipment is being maintained and a cleaning schedule will mandate that play areas are sanitized three times a week.

Youths play basketball on the court at Renfrew Field in Adams. The court was closed and the rims removed to combat the spread of COVID-19, but it has since reopened.

Chris Adorno and his granddaughter Julia LeClair play at Burbank Park in Pittsfield.

Communities around the Berkshires have begun to reopen playgrounds and parks as pandemic-related restrictions ease this summer.

In Pittsfield, the city has reopened Burbank Park and is asking residents to follow public health guidance and swim at their own risk.

All playgrounds under the city's jurisdiction — about 35 of them across city parks and schools — are now open, and all parking restrictions have been lifted, according to James McGrath, program manager for the Park, Open Space and Natural Resource.

The state allowed playgrounds, spray decks and outdoor fitness areas to reopen as of June 15.

Guidance released by the state Executive Office of Energy and Environmental Affairs says that outdoor facilities such as playgrounds "require normal routine cleaning" but not disinfecting, and specifies that "high touch surfaces made of plastic or metal, including grab bars and railings, tables and benches, should be frequently cleaned."

Such "high touch" surfaces on all city playgrounds and structures will be sanitized at least once per week, McGrath said.

"We think that's going to provide a very high level of protection for people who use our playgrounds," he said.

Signs posted at city playgrounds alert residents to the cleaning schedule and remind parkgoers to wear face masks when social distancing is not possible and wash hands after touching a play structure. The reminder is sorely needed, McGrath said.

"We're not seeing a lot of compliance when it comes to face coverings," he said. "It would appear that current guidance isn't being followed, so, that's concerning for us."

The Community Development Department struggled to hire seasonal maintenance workers this summer, and McGrath said "we knew that that would be a huge commitment from city staff in order to sanitize daily."

Burbank Park also is open, though this year the city has not hired lifeguards to oversee the public beach on Onota Lake. "The entirety of the park is swim at your own risk," said McGrath, adding that "with each passing year, it's becoming increasingly more difficult" to hire lifeguards.

In addition to scant ranks of lifeguards, he said the continued closure of the large day care centers also means there would have been a lighter workload. The city made some "tough decisions" this year when it comes to reopening public facilities.

For the first time in several years, McGrath said, the city is not holding its Summer Playground Program, a drop-in and free recreation program for children typically staffed with young adults.

While he said the playground program is "low cost and high impact," a tight budget was a factor in deciding not to hold the program or hire seasonal lifeguards.

Of his department, which typically has seven maintenance workers over the summer months but this year only has two, McGrath said, "we're doing more with less."

Public restrooms across the parks system will not be opened, except in a few select instances in which youth sports teams have agreed to maintain the facilities.

Though children now are free to enjoy playgrounds, he said the same is not true of the city's two splash pads. The city plans to open the splash pad at The Common park and the new splash pad at Clapp Park in phase three of the state's reopening plan, which could begin, at the earliest, toward the end of the first week in July.

The new splash pad at Clapp Park is "not 100 percent completed," said McGrath, due to issues he said were out of the city's control. The addition still needs to be hooked up for power and water.

Parks are also open in South County, with varying degrees of monitoring to ensure distancing, and with some requiring a check-in with staff upon arrival. Some, like Monterey, have removed picnic tables from the town beach because they can't sanitize them, and to make sure people don't "bunch up," said Select Board member Steven Weisz.

The ballfield and basketball courts are open there but can't have organized games. The story is the same at the field at French Park in Egremont. There, the tennis courts and horse ring are open, but residents have to sign up first. Same for the dog park there, which is only open to residents, who must first sign up and can go one person per family. The pavilion for special events is closed.

In Sheffield, parks are open, but not for groups over 10.

Town beach at Lake Mansfield in Great Barrington is open, with lifeguards and other staff to keep the number of visitors down. The Housatonic playground opens July 6 with weekday staffing, and organized games and activities will be allowed as long as safe practices are followed. Masks are required for children over age 2 when 6 feet of distance cannot be maintained.

While playground equipment in Great Barrington and Housatonic is still off-limits, in Monterey, playground equipment behind Town Hall is open with sanitizer available. Monterey's Lake Garfield beach is open, with a port-a-potty sanitized twice daily, and with lifeguards beginning on July 1. Officials are asking people to distance and will loosely monitor the beach and ballfield.

North Adams has opened up its parks, which can now be used for recreational activities. Playgrounds are being cleaned and are in use, and signage will be posted stressing the importance of wearing face masks and social distancing, according to Michael J. Canales, administrative officer for the city.

In Adams, Town Administrator Jay Green said "we're eyeing an opening date of July 6 to open fields and playgrounds ... The playgrounds and open spaces are to be used at your "own risk. Equipment will be cleaned once prior to opening.

"They are installing signs with basic info of proper social distancing, masks, and handwashing ... We want to reopen for use, but need to follow public health guidelines."

Amanda Burke can be reached at aburke@berkshireeagle.com, on Twitter @amandaburkec and 413-496-6296.Eagle staff writers Heather Bellow and Jake Mendel contributed to this report.