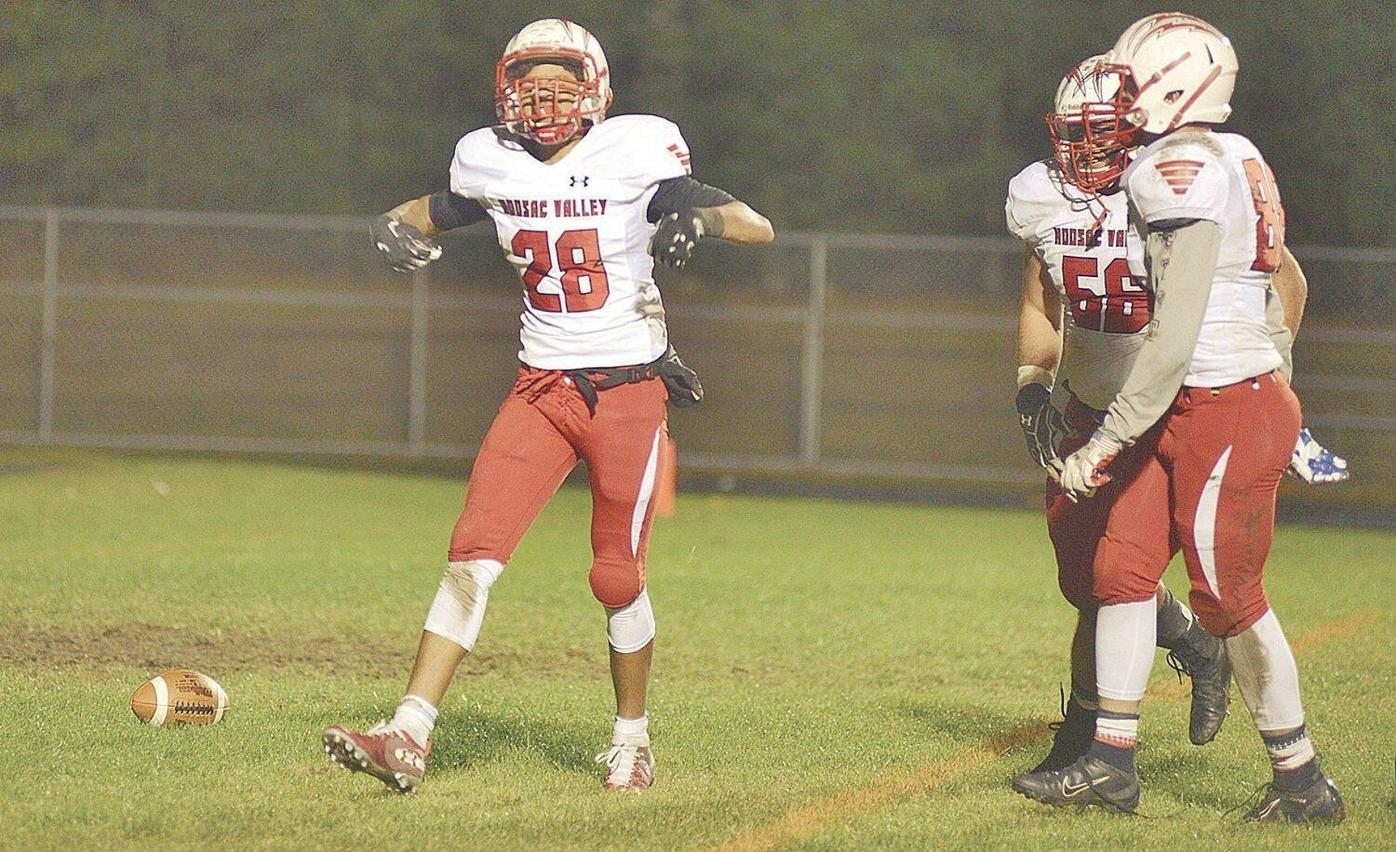 Shaun Kastner is just one of a handful of different weapons the undefeated Hurricanes have turned to this season. 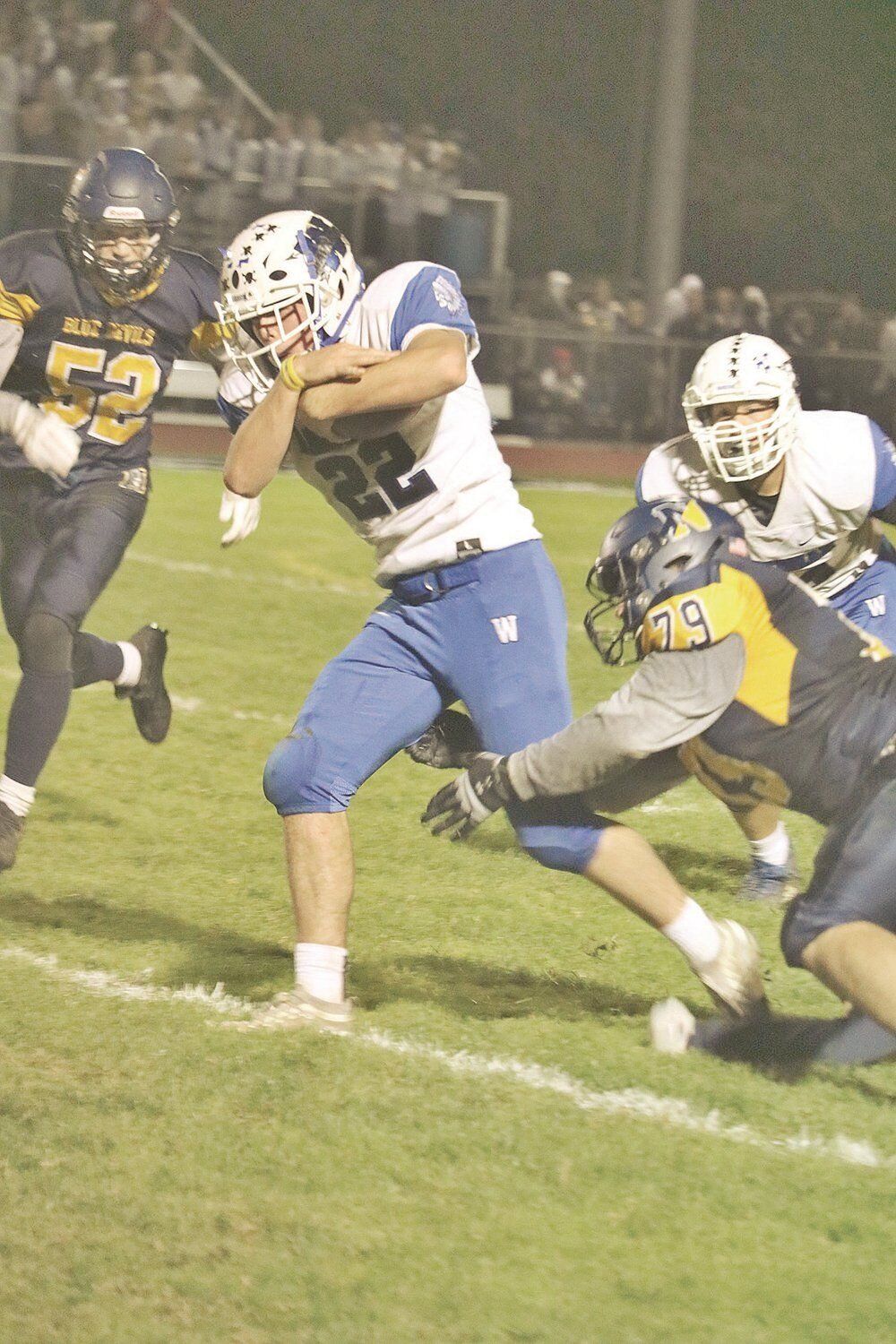 Zach Archambault and the Wahconah Warriors need to wrap up the ball over the season's final three weeks or they could fumble away a spot in the playoffs. 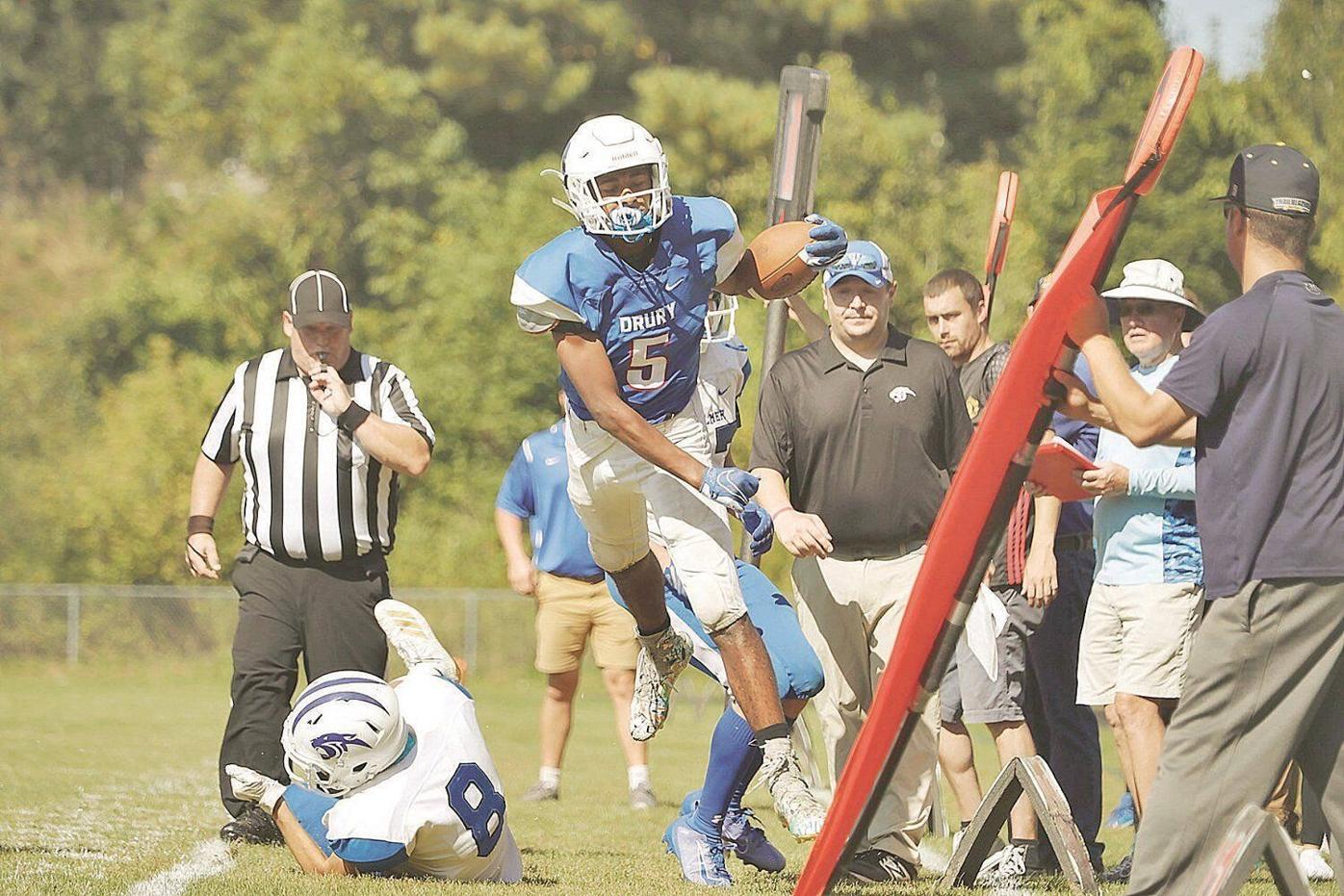 Freshmen Louis Guillotte is developing into an all-around threat for a Drury Mount Greylock co-op football team that has won four-straight games. 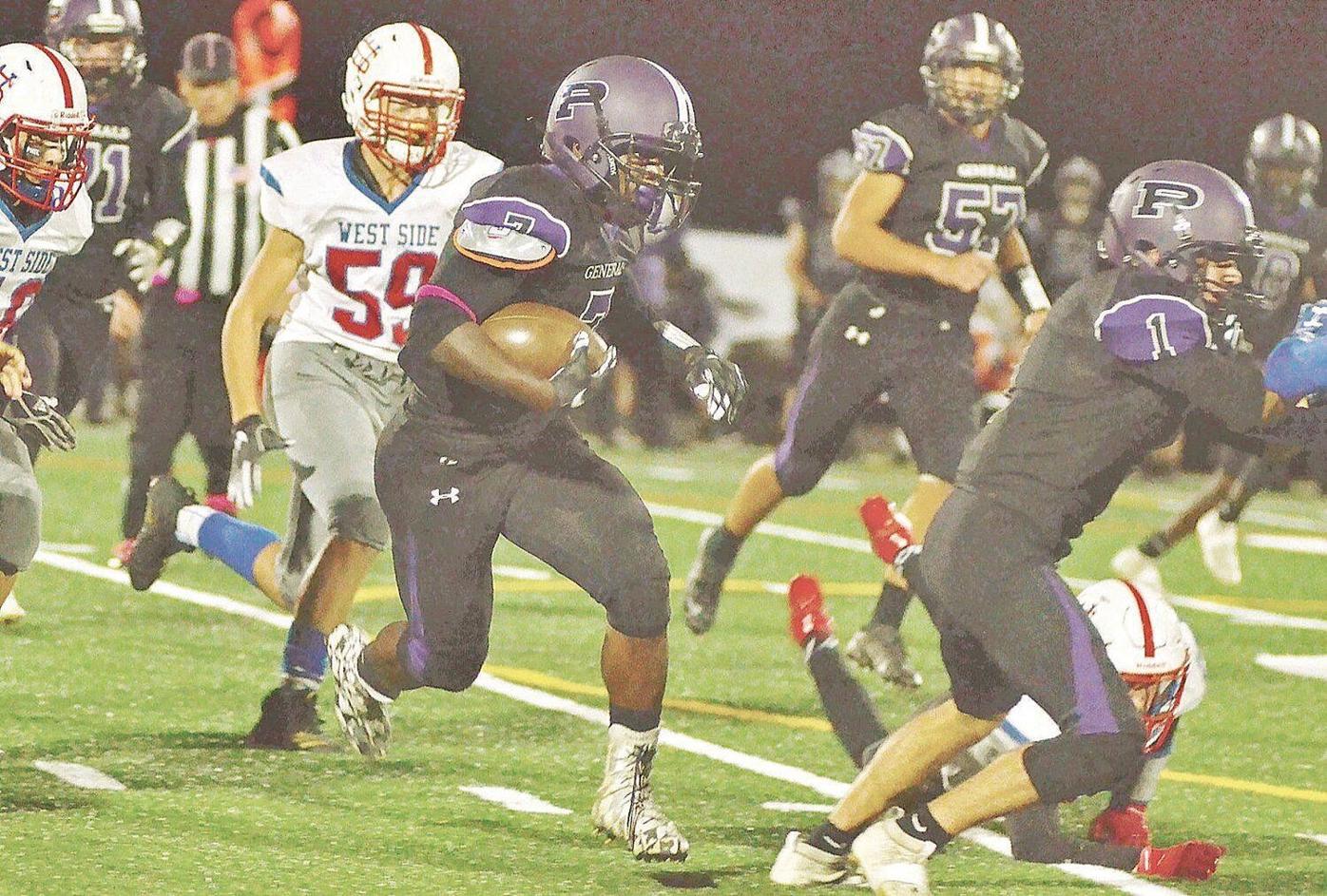 The Generals have had some troubles throughout 2019, but Emmanuel Nda has run through every team he has faced and averages almost 200 yards a game on the ground.

Shaun Kastner is just one of a handful of different weapons the undefeated Hurricanes have turned to this season.

Zach Archambault and the Wahconah Warriors need to wrap up the ball over the season's final three weeks or they could fumble away a spot in the playoffs.

Freshmen Louis Guillotte is developing into an all-around threat for a Drury Mount Greylock co-op football team that has won four-straight games.

The Generals have had some troubles throughout 2019, but Emmanuel Nda has run through every team he has faced and averages almost 200 yards a game on the ground.

This would be the perfect time to make a joke about Hurricanes dominating Berkshire County, but I don't see it in the forecast. Instead, we'll start by acknowledging Hoosac Valley as the county's lone undefeated team after Wahconah fell to Northampton last week. The Warriors couldn't overcome their turnover issues that have troubled them all season. However, Gary Campbell Jr.'s squad is still in position to claim one of the four playoff spots in D-VII. It may be time to rename D-VIII after Berkshire County. Local teams hold three of the four playoff spots and the McCann Hornets may have a shot to make it a clean sweep for the county. Not to get too catty, but Lee is coming in hot. The Wildcats have won two straight and have a favorable schedule moving forward. Is it possible we see another dramatic matchup between Hoosac Valley and Lee in the playoffs? It is tough to ignore the Drury and Mount Greylock co-op that is metaphorically (and you could make the argument for literally) throwing teams off the field and have won four straight. Teams like Monument Mountain, Pittsfield and Taconic need to right the wrongs quick before they wake up from the dream of playoff hopes.

And then there was one. The Hurricanes are not only Berkshire County's final undefeated team, but the idea of finishing the regular season perfect is starting to look like a real possibility. Hoosac Valley's final two games will be played under the lights at Renfrew Athletic Field. The games will be played in back-to-back weeks before the top team in D-VIII has a bye week in order to prepare for the Western Mass. playoffs. The Hurricanes blew by the Orioles last weekend as running backs Liam Feeley and Shaun Kastner each scored twice against Belchertown, the fourth seed in D-V. Chicopee offers another tough test for Hoosac, but the Hurricanes haven't missed a beat this season. Offensively, they've scored 74-more points than any other team in Berkshire County. The Drury Blue Devils have allowed one less point than the Hurricanes, but have also played one fewer game.

Friday night will be a special night for Drury and Mount Greylock co-op, as they'll call Mount Greylock home for the night. Coach Al Marceau is excited with how the Mount Greylock athletes are coming into their own as members of the Blue Devils. Friday will offer players like Austin Gross, who scored a touchdown and had 35 yards on the ground against Smith Vocational, the chance to receiver a curtain call on their home turf. Speaking of last week's game against Smith Vocational, the 57-0 win is helping Drury solidify its case as not only one of the best teams in Berkshire County, but in all of D-VIII. Drury's 4-1 record is tied with Ware as the second-best in the division. Drury is riding a 4-game winning streak in which it has outscored opponents 119-32. The Blue Devils have a devastating one-two punch in Dante Woodson and Louis Guillotte at running back, who combined for four touchdowns last week. With the ability to control the game on the ground, Drury's physical defense punishes opponents who are stuck trying to play catch-up.

The 2019 season isn't headed in the direction the Generals would've hoped, but running back Emmanuel Nda is nearly unstoppable. The junior, I repeat, the junior, has rushed for 979 yards on the season and is averaging 196 yards per game on the ground. He has eight touchdowns and will likely need to bring his A-game on Friday in order to keep up with undefeated Amherst, which owns the top spot in D-VII. Behind Nda, the Generals have another big-play threat in Sincere Moorer, who would likely start on any team that doesn't have a starter that is averaging roughly 200 yards a game. Pittsfield's Achilles heel has been its inability to limit big plays, especially in the passing game. If the Generals can put a lid on Amherst's offensive attack, an offense led by Nda, Moorer and Patrick Rindfuss can move the ball, as they have averaged 23 points a game.

Last week's loss to South Hadley was another tough game for Taconic. The issues for the Braves start and end on the offensive side of the ball. Through five games, the Braves averaging less than 10 points a game. The Braves are currently the ninth seed in D-VII, but they have a few opportunities to end the season on a good note, starting this Friday against winless Putnam. On Oct. 26 the Braves face East Longmeadow (1-4) before ending the season in the city rivalry game against Pittsfield. In order to improve on an offensive performance that included just 167 total yards last week, Taconic needs to control the offensive and defensive lines. If they can get that push in the trenches, Haywood Eurquhart and company can string together some first downs.

Wahconah's undefeated start to the 2019 season came to an end in a 26-16 loss to Northampton. During the Route 9 Rumble, the Warriors turned the ball over four times. In fact, they've turned the ball over 13 times through five games, but Wahconah has proven that it can overcome those issues. Wahconah sits fourth in D-VII with the help of a defense that is allowing 12 points per game. Friday's home game features an East Longmeadow team that should offer the Warriors another opportunity to smooth out the offense and prepare for a shot in the Western Mass. playoffs. Ryan Scott is continuing to grow at quarterback of the Warriors and threw another touchdown last week. The Warriors have been held to less than 250 total offensive yards in four-straight weeks. It is tough to imagine that streak continues in the home of the Warriors with a roaring Wahconah behind them.

Not only have the Wildcats won two straight after a three-game skid early in the season, their final two opponents have a combined record of 4-7. Lee could do no wrong in a massive 48-0 win over Commerce. Despite the struggles early, Lee's defense has always kept them in games and is allowing just 15 points per game. As a result, the Wildcats currently hold the fourth, and final playoff spot in D-VIII. After the Wildcats defeated Mahar by 23 with the help of a strong ground attack from Gabe Kelley and Jack Purcell, they had a balanced attack against Commerce. Jimmy Purcell threw two touchdown passes and had a 29-yard touchdown run. Jack Purcell added three more touchdowns, all on the ground. They say to never count your chickens before they hatch, but everyone would like to see another match between Lee and Hoosac Valley in the playoffs.

A strong end to the season could help the Eagles and Spartans, who are both just outside of the playoff picture. The Spartans enter action on Friday after losing back-to-back games by 34 points. Hunter DeGrenier continues to show why he can be the quarterback of the future for Monument, as he ripped off a 46-yard touchdown run. Outside of the run, the Spartans have been kept off the board. In the two wins, the Spartans found plenty of success on the ground, but against Mahar they were held to just 86 rushing yards and DeGrenier was responsible for 72 of them. If the Spartans can establish the run early on against Easthampton they can continue to push Wahconah for the final spot in the D-VII playoff picture.

The Hornets, coming off their bye, are trying to spin a complete 180 on their 2019 season. Before the week off, McCann picked up their first win of the season with a 12-0 victory at Mohawk. The Hornets currently sit as the eighth seed in D-VIII, but a case could be made that they could be vying for a playoff spot by the end of the month. McCann has three games remaining on its schedule and those teams have a combined record of 2-13. It is too early to look at the different "ifs" that need to happen in order for the Hornets to make it and that will likely be the mindset of the squad headed into Saturday's game against Smith. If the Hornets are going to score, they're going to do it on the legs of Darius Tovani and David Delisle, who combined for 141 yards in the win over Mohawk.