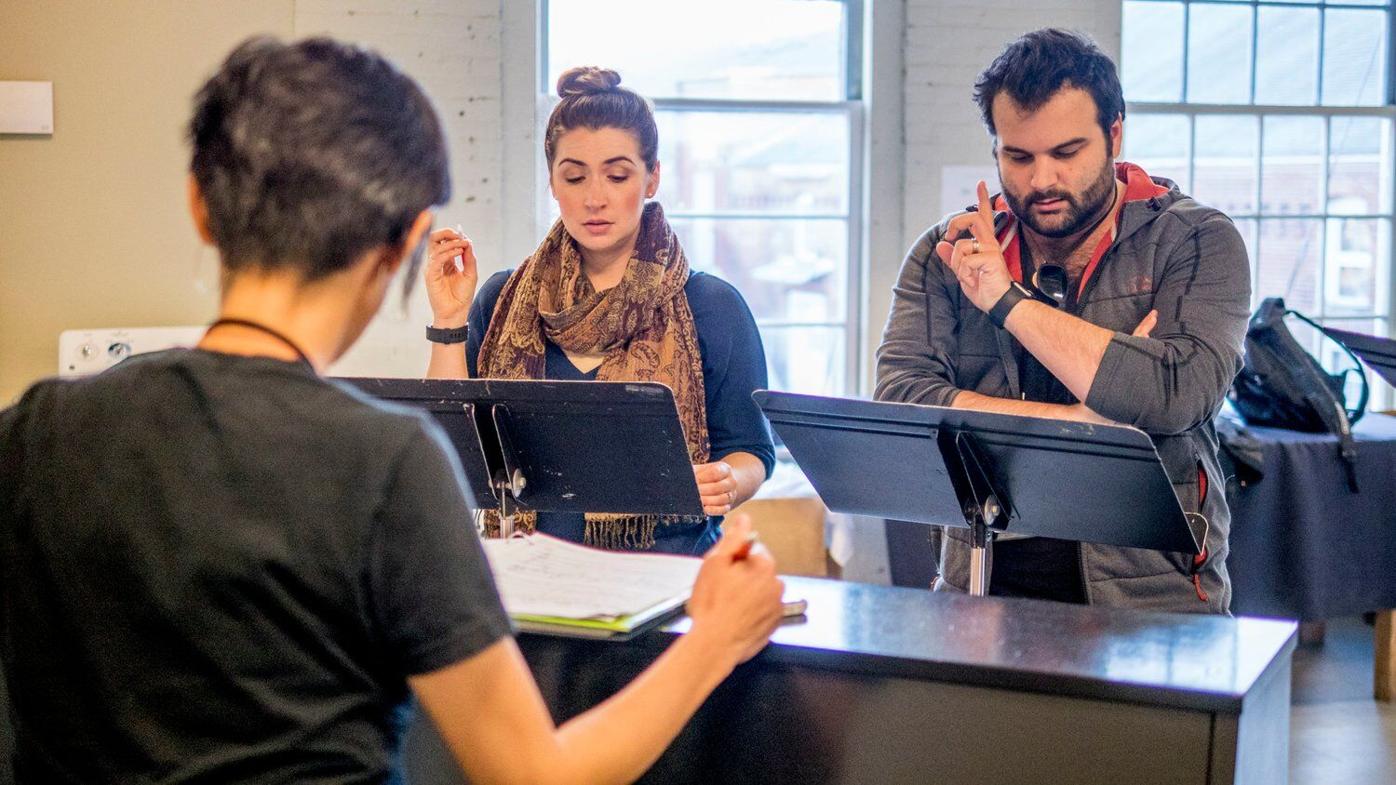 Pianist Julia Hanna puts soprano Rachel Hall and baritone Joshua Collier through their paces during a rehearsal of "The Fall of the House of Usher" at Mass MoCA, where this music-theater work-in-development performs Saturday evening. 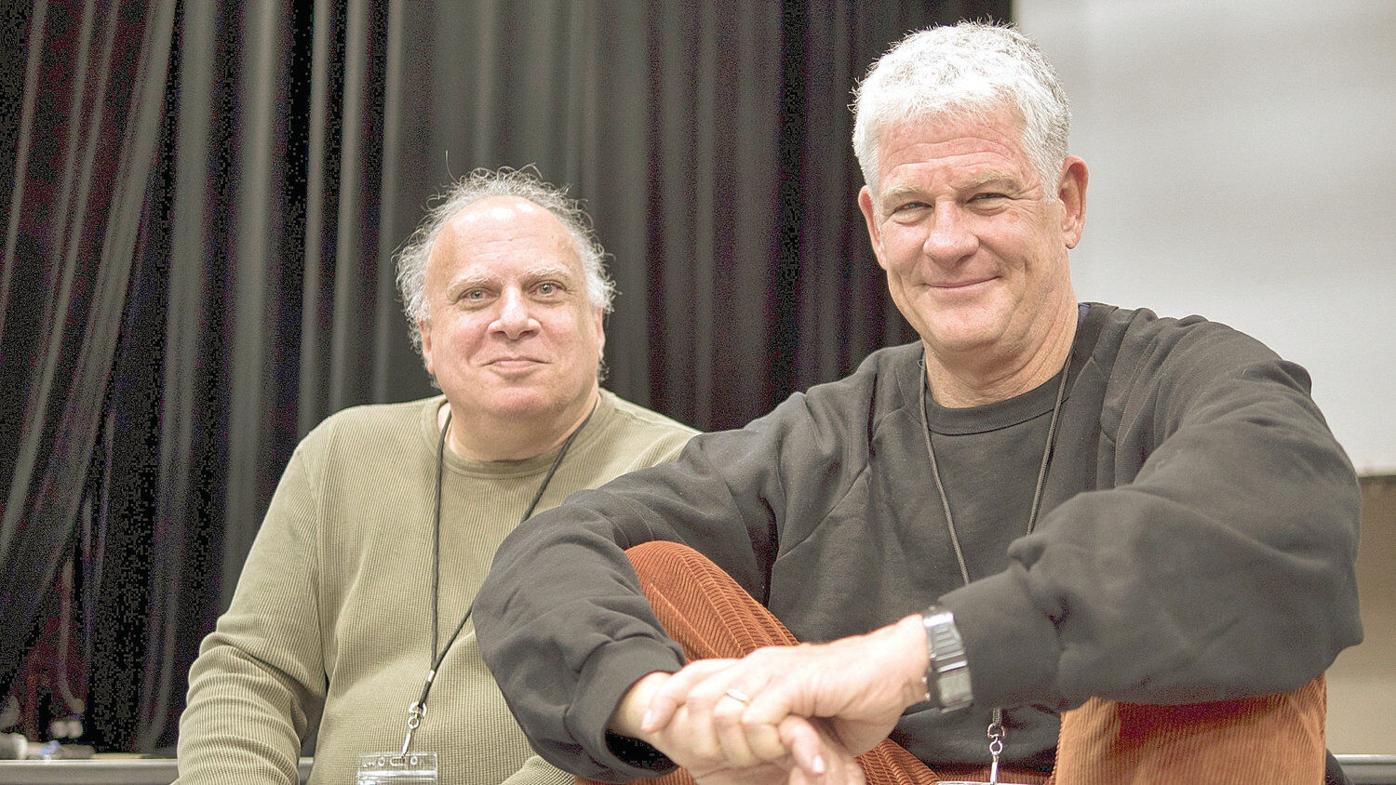 Writer Arthur Yorinks, left, seen here durIng a rehearsal at Mass MoCA with director Jim Simpson, is well-known for his children's books but he also boasts a 50-year career in the theater. His adaptation of Edgar Allan Poe's "The Fall of the House of Usher" is a nod to what got him started as a writer.

Pianist Julia Hanna puts soprano Rachel Hall and baritone Joshua Collier through their paces during a rehearsal of "The Fall of the House of Usher" at Mass MoCA, where this music-theater work-in-development performs Saturday evening.

Writer Arthur Yorinks, left, seen here durIng a rehearsal at Mass MoCA with director Jim Simpson, is well-known for his children's books but he also boasts a 50-year career in the theater. His adaptation of Edgar Allan Poe's "The Fall of the House of Usher" is a nod to what got him started as a writer.

NORTH ADAMS — With its depiction of destiny and decay and undertones of debauchery, "The Fall of the House of Usher" is Edgar Allan Poe's hallucinatory fever dream of a short story. For Arthur Yorinks, the story has been not quite an albatross around his neck, but certainly part of a decades-long mission.

Yorinks is well-known for his children's books but also boasts a 50-year career in the theater. His latest work, a stage adaptation of Poe's "The Fall of the House of Usher," premiering 8 p.m. Saturday at Mass MoCA, is a nod to what got him started as a writer — Poe's short story, "The Black Cat," which Yorinks read when he was eight.

"I was just amazed at the power of what words can do," he said in an interview with the Eagle. "I read him at a very tender age, just, you know, not for any particular reason. It's just that the book happened to be on the shelf and I picked it up and it scared the daylights out me. And I thought, wow, somebody can do that with just putting words on paper. I want to be able to do that."

It was 35 years later that composer Philip Glass suggested the Poe project to Yorinks, an opera based on "The Fall of the House of Usher," commissioned by American Repertory Theater in Cambridge, and the Kentucky Opera, and performed in 1988 at various venues, including Lincoln Center.

But that's not the production Yorinks is bringing to Mass MoCA.

Shortly after the original run, Glass had the idea to do a film based on the opera. He wanted not to make a filmed version of the opera, but, rather, a film that incorporated the opera.

"I wrote a treatment for that film which added a whole frame around the story and got involved kind of a backstory of the two main characters," Yorinks said.

The film became part of a development project at the Sundance Film Festival, and Glass and Yorinks began to search for a director. Bertrand Tavernier was considered at that point, and Ken Russell was spoken to, but it was legendary British director Michael Powell ("The Red Shoes," "Black Narcissus," "The Tales of Hoffmann," "Stairway to Heaven," "The Life and Death of Colonel Blimp," "Peeping Tom") who became most strongly attached to the project.

"I sent Michael a treatment and at first he just kind of not quite rejected it, but it just didn't jive," said Yorinks. "And then months later I got a postcard from him saying 'I was totally wrong, let's talk.'"

Yorinks met with Powell and plans formed — Powell had locations in mind and fundraising began, but everything fell apart when not enough money could be gathered and Powell poured himself into a memoir. The project languished. When Powell died in 1990, it was completely put aside.

"Powell would dictate his ideas and thoughts into what they used to call a dictaphone and send me cassettes," he said. "And I had them. And it was one in particular, about a 15 minute long, 20-minute long audio cassette of him speaking his notes to me and to others involved in the film, which was so compelling. I just couldn't get it out of my head. It just was one of those things that every so often I think about. I knew there would never be a film made, but I thought, well, what can I do with this?"

At one point, Yorinks even considered creating an audio version of the production, though nothing came of it.

Several years ago, Yorinks began to think that maybe he would just direct a stage version of the movie idea, incorporating parts of the opera. He floated the idea to some friends, who encouraged him to pursue it, and then decided to let it percolate for a while. A year ago, he approached Mass MoCA with the idea to come and develop it in a short residency.

What will result at the end of the week is not the original opera, nor the attempted film, but an entirely different thing, unique to itself, that uses aspects of that of both but is something new, with a piano score version of the opera, performers, puppets and projections.

Yorinks says that the backstory in the narrative he is devising will involve the three main characters as children.

"One could possibly say that these events that take place in the story were ordained given their childhood," said Yorinks. "It's Poe, it's definitely Poe. There are all kinds of hostile threads. Incest. And the fact that they're twins. Is this all just one person in essence, or is it really the three people that he describes? What is it about, is it about creativity? Is it about death?"

And Yorinks is bringing a team of collaborators with him to see what results.

Included in the production team are sound effects engineer Fred Newman, an actor and sound effects artist known for his work on "Prairie Home Companion" and with the Muppets; puppeteer Roman Paska; projection designer Wendall K. Harrington; and head of the Philip Glass Ensemble, Michael Riesman.

"We all agreed that we're going to sit at Mass Moca and pretend it's a kitchen and throw in every ingredient we know of or would like in this pot and see what develops," Yorinks said. "I'm very happy that they labeled this performance as work-in-progress because that's indeed what it will be. "

Yorinks' ultimate hope is that this version gets a full production at some point. He feels certain that something will come out of this developmental version, but right now, he's thrilled to see what comes to light at Mass MoCA this week.

"To me, this is like the wood gathering," said Yorinks. "We'll see if there are any sparks on the 10th, which I, of course, hope they will be, and even if there's just a little ember lit that's good enough for me to keep going with it."