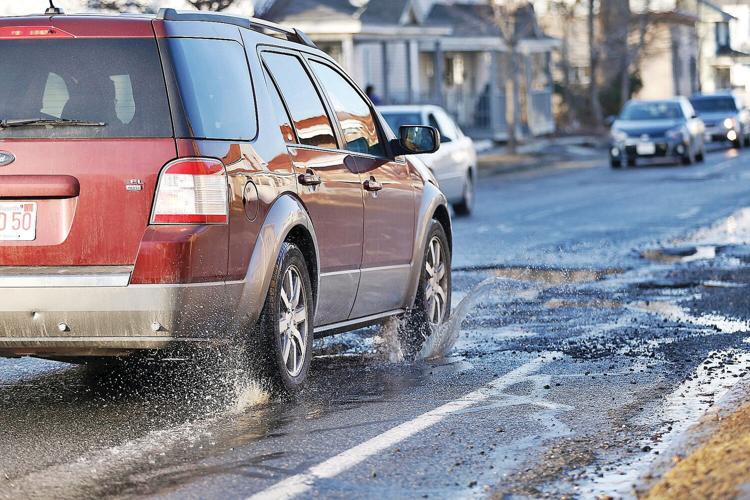 Drivers can't avoid potholes while staying in their lane on Seymour Street in Pittsfield. The wild weather swings in recent weeks have made this year particularly challenging in keeping up with patching the hazards. 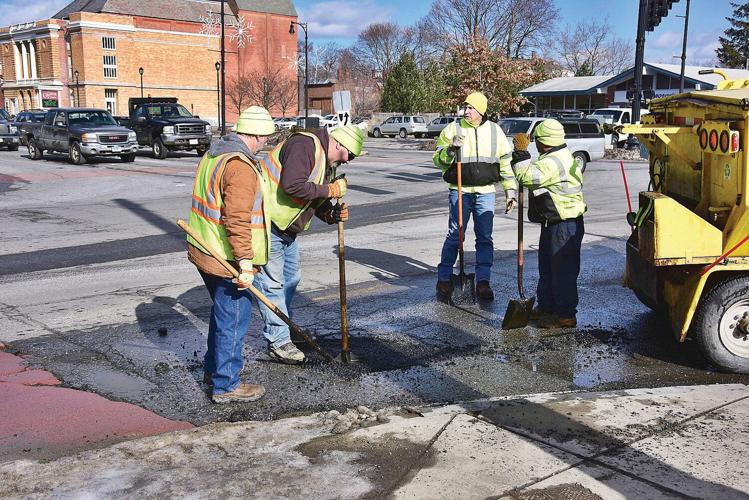 Employees with the Pittsfield Department of Public Works fill a pothole with cold patch at West Housatonic and South streets in Pittsfield this month.

Drivers can't avoid potholes while staying in their lane on Seymour Street in Pittsfield. The wild weather swings in recent weeks have made this year particularly challenging in keeping up with patching the hazards.

Employees with the Pittsfield Department of Public Works fill a pothole with cold patch at West Housatonic and South streets in Pittsfield this month.

PITTSFIELD — Sam Barbarotta was running errands with her dad until a pothole swallowed their Tuesday evening.

It was dark, she said, and she didn't see the manhole-size chasm in front of Cumberland Farms on Dalton Avenue before her Audi A3 thumped right through it.

She knew right away she had blown a tire.

"My side was instantly lower, and I could feel I was riding on the rim," she said.

So, she rolled into a neighboring parking lot, where she found she had lost both driver's-side tires.

She also found two other drivers who had met the same fate.

"All three of us had just popped our tires in the same hole," she said.

The Pittsfield Police Department confirmed that the pothole in question claimed tires on at least six vehicles that night. A desk officer said they stood among at least a dozen calls for pothole-popped tires citywide on Tuesday alone.

The roadway rash prompted a petition from Ward 6 Councilor John Krol and Ward 4 Councilor Chris Connell, who are calling on City Hall to explore the creation of a "rapid response" plan, possibly involving private contractors, to more quickly alleviate the roadway hazards.

"It's been particularly bad this winter," said Public Services Commissioner David Turocy, noting that Seymour Street, East Street and Pecks Road are among the most notorious in reports made using the city's app, PittSMART.

Turocy said his department is using the online reporting system to break the city into quadrants and divide duties among the crews.

"We're trying to get out to them the best I can," he said. "Anybody who's not doing snow is doing potholes."

The wild weather swings in recent weeks have made this year particularly challenging.

"That's when the blacktop breaks up," he said. "It's just the nature of the beast."

All wintertime fixes are temporary ones, Roughley said, because asphalt plants are closed during the winter. Asphalt endures only when workers are able to apply hot asphalt to dry roads, which are both hard to come by as winter slogs on.

He said the town has a "hot box," which allows his crews to heat the patch manually, but not in large-enough quantities for longer-term fixes.

But from linkage fixes and blown tires to multiple alignments and pothole dodging that can lead to close calls, potholes are more than a minor inconvenience for local drivers.

"It's jarring. All of a sudden you bottom out like that," said Rebecca Maaia, who said a pothole on Crofut Street punctured her tire.

She said the crack was so cringeworthy that she turned around to check the path.

"It was so loud that I was afraid I hit something else," Maaia said.

Windsor Highway Superintendent Dave Laviolette said the county's gravel roads, which account for more than half his town's street count, get hit even harder with all the water.

"Gravel roads, they're taking a heck of a pounding, too, with all the rain," he said. "It's a bad year, to put it mildly."

He said ravaged roadways outnumber dry days available to work on them, and so his workers have been out in the rain, sweeping water out of potholes in order to fill them with cold patch.

"We gotta take it as it comes," he said, noting that heavy rain and plows have been ripping out patches in short order. "We're at the mercy of the weather, basically."

Amanda Drane can be reached at adrane@berkshireeagle.com, @amandadrane on Twitter, and 413-496-6296.