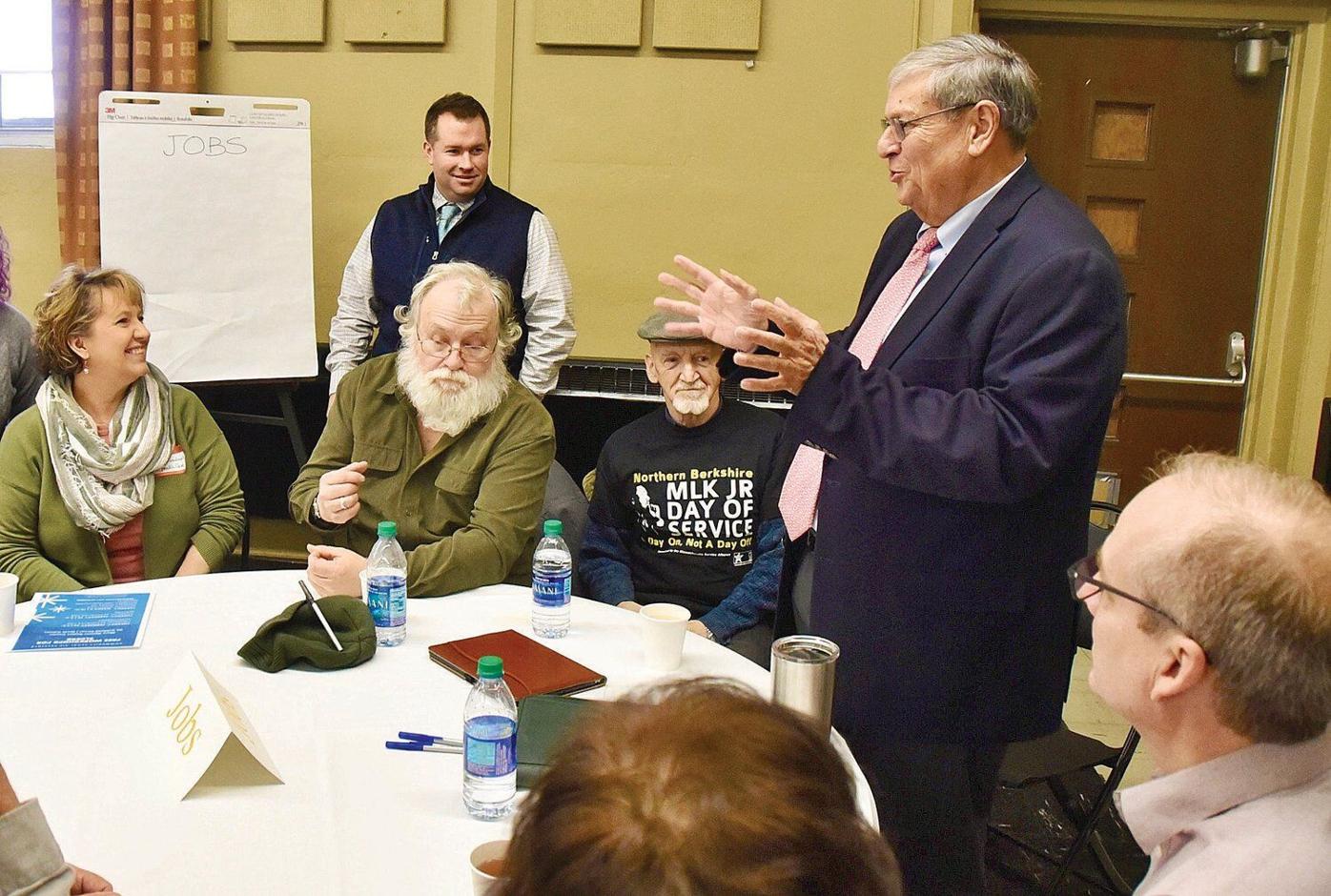 Jonathan Butler, CEO of 1Berkshire, back left, and state Rep. John Barrett III, D-North Adams, back right, talk with members of a breakout group during the Community Conversation on Poverty event Friday at the Massachusetts College of Liberal Arts' Church Street Center. 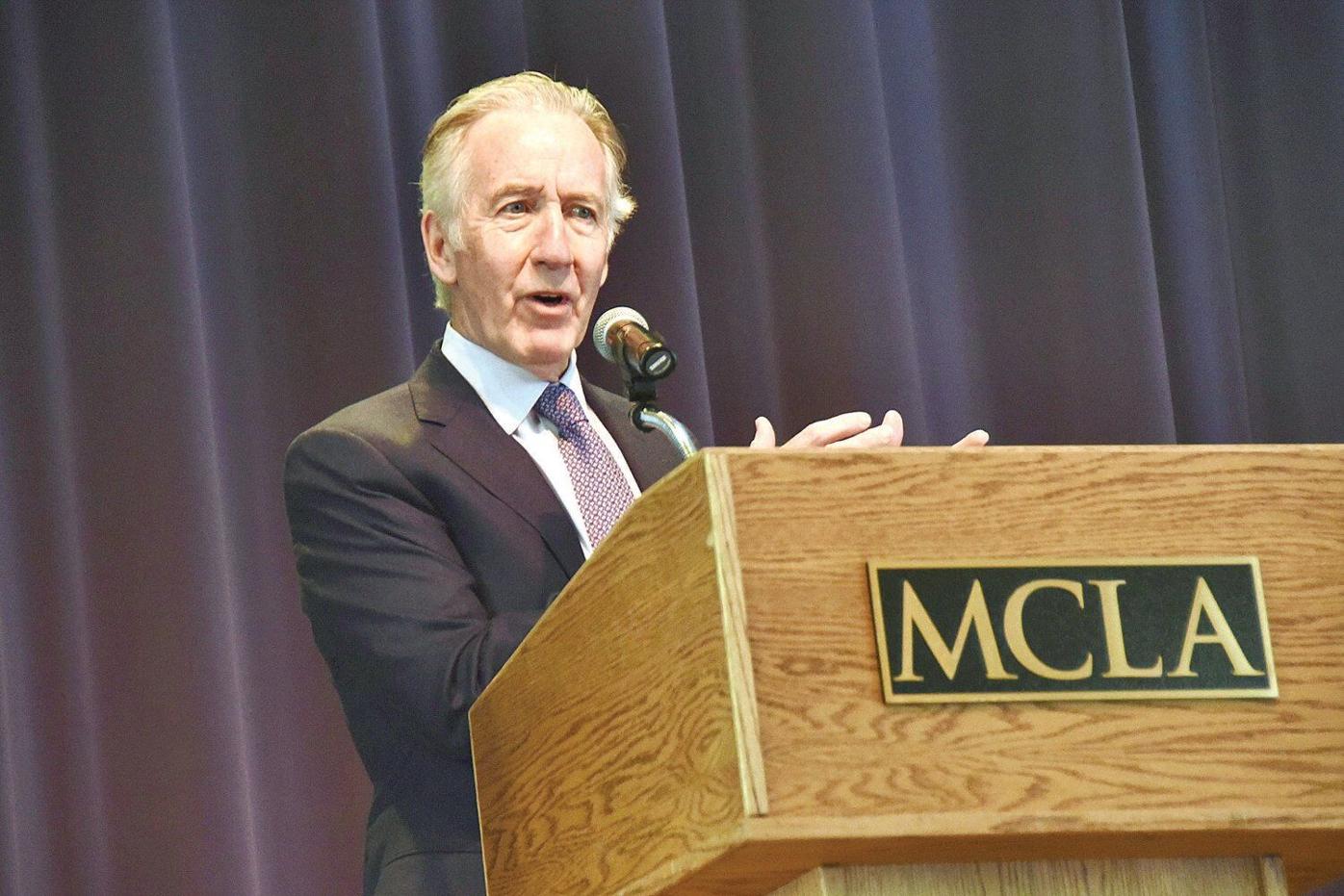 U.S. Rep. Richard Neal, D-Springfield, addresses an event Friday at the Massachusetts College of Liberal Arts' Church Street Center dealing with poverty in the Berkshires. Among his topics, Neal expressed his support for the Affordable Care Act and the individual mandate, and decried the federal minimum wage level of $7.25 per hour.

Jonathan Butler, CEO of 1Berkshire, back left, and state Rep. John Barrett III, D-North Adams, back right, talk with members of a breakout group during the Community Conversation on Poverty event Friday at the Massachusetts College of Liberal Arts' Church Street Center.

U.S. Rep. Richard Neal, D-Springfield, addresses an event Friday at the Massachusetts College of Liberal Arts' Church Street Center dealing with poverty in the Berkshires. Among his topics, Neal expressed his support for the Affordable Care Act and the individual mandate, and decried the federal minimum wage level of $7.25 per hour.

NORTH ADAMS — More than 140 people converged on the Massachusetts College of Liberal Arts' Church Street Center on Friday to study all aspects of poverty in the Berkshires.

The all-morning Community Conversation on Poverty event was capped off by some remarks from U.S. Rep. Richard Neal, D-Springfield, who noted that the Trump administration is doing its best to hamstring efforts to alleviate the worst impacts of poverty, such as hunger and homelessness.

On hand were panelists to coordinate breakout group sessions to talk about specific aspects of poverty, define the problem, and discuss barriers, gaps in services and possible solutions.

After each panelist addressed the group as a whole to bring some basic definition and status of each problem, the audience split into eight groups to discuss each poverty-driven issue. Those issues were jobs, adult education, hunger and food insecurity, transportation, housing, child care, financial literacy and opioid addiction.

After the group sessions, each of the panelists gave their report to the reconvened crowd.

Robert Malnati, administrator at the Berkshire Regional Transit Authority, said the group focusing on transportation sees a need for free fares for certain riders and an express route from North Adams to Pittsfield along Route 7 for those who live in one and work in the other.

Anne Nenetz-Carlson, executive director of Child Care of the Berkshires, said that challenges to affordable child care in the county include factors like transportation and affordable spaces to locate a child care center. A lack of child care also is an issue, as indicated by waiting lists that are so long, some children never get placed.

Low pay levels for caregivers, and a need for classes on parenting skills for new parents, also were identified as local challenges.

Jonathan Butler, CEO of 1Berkshire, reported for the jobs group. He explained that even though there are up to 2,000 job openings at any given time, and have been for the past few years, there still is a significant portion of the populace that has barriers to employment that keep it there, such as a lack of transportation and the need for a living wage. Entry-level job wages frequently are insufficient to provide shelter, food and transportation.

"If an employer wants to get someone out of poverty and into a meaningful role as a team member, then they'll need to see the importance of pay levels," Butler said.

Brad Gordon, executive director of the Berkshire County Regional Housing Authority, said housing is a compelling issue in the Berkshires, where 40 percent of the housing stock was built before 1940 and much of it is in dire need of reinvestment and code improvements. His group noted a lack of affordable housing commensurate with local incomes and a lack of pet-friendly housing.

Some in his group called for a some sort of database for screening potential landlords.

Andrew Morehouse, executive director of the Food Bank of Western Massachusetts, noted that food insecurity is widespread, and there are ways to alleviate food insecurity by increasing wages and access to transportation. But on April 1, 13,000 people in the Berkshires will have less access to food due to changes President Donald Trump has imposed on the Supplemental Nutrition Assistance Program.

"There's no way to make up for the loss of that," he said.

Deborah Leonczyk, executive director of the Berkshire Community Action Council, said the findings of the conversations will be compiled and used by BCAC senior management to determine what its role should be in each area, and how to mobilize resources to that end.

To wrap up the effort, Neal offered his remarks to the gathering.

He noted the dichotomy of the American economy, where the stock market is hitting record highs and yet 2 million people have deserted the job market due to opioid addiction. He called for better programs for treating addiction, and for more effective job training. And people with substance abuse disorder who have been arrested should be given treatment options.

"It can't just be about punishment, although I have less sympathy for the dealers," Neal said. "But we need to get them back into the workforce — they have job skills."

Neal also expressed his support for the Affordable Care Act, and the individual mandate. In Massachusetts, he noted, 97 percent of adults have health insurance, and 100 percent of children living in the Bay State are covered.