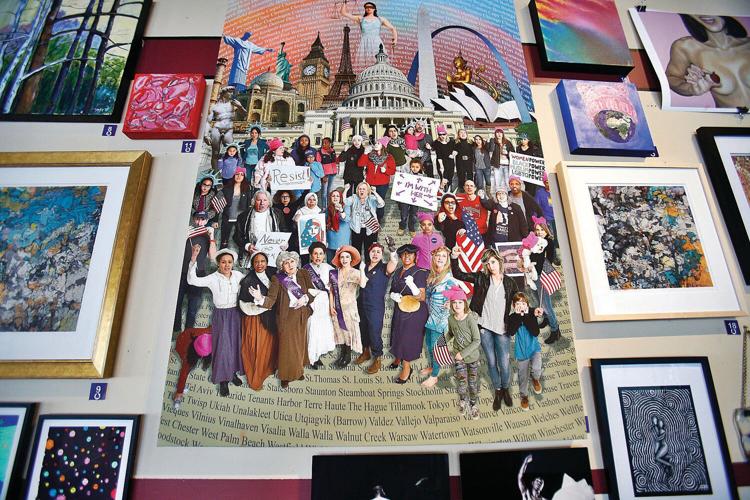 The #PressforProgress art exhibition is hung for International Women's Day that includes art from 25 regional artists and a high school photography exhibit at the Colonial Theatre in Pittsfield. 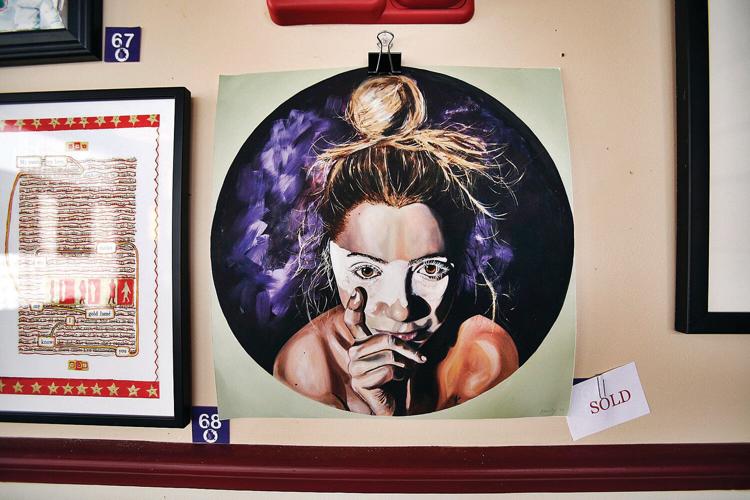 A self-portrait by Paige Greeley, an artist and a senior at Endicott College. 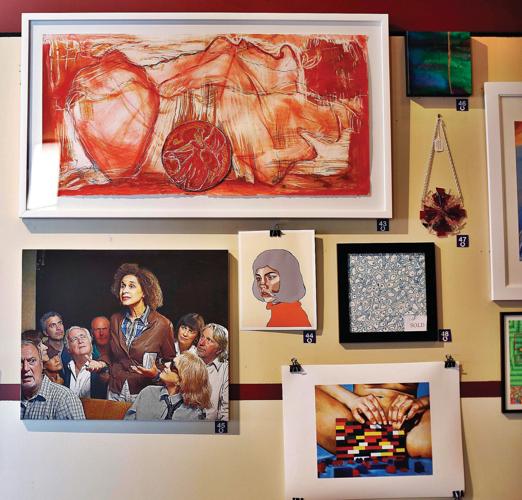 The #PressforProgress is on exhibit now through April 29. 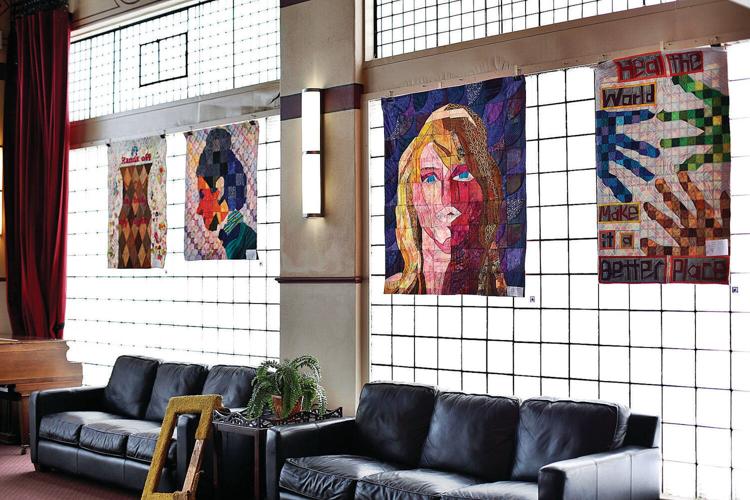 Proceeds from art sales will benefit the Elizabeth Freeman Center.

The #PressforProgress art exhibition is hung for International Women's Day that includes art from 25 regional artists and a high school photography exhibit at the Colonial Theatre in Pittsfield.

A self-portrait by Paige Greeley, an artist and a senior at Endicott College.

The #PressforProgress is on exhibit now through April 29.

Proceeds from art sales will benefit the Elizabeth Freeman Center.

PITTSFIELD — She looks calmly and directly at the person looking back at her. With brown hair drawn up to the top of her head, brown eyes splashed with face-paint like a masquerade, bare shoulders, she cups her chin in her hand and considers what she sees.

She is a self-portrait by Paige Greeley, an artist and a senior at Endicott College on coast north of Boston.

"I love the body," Greeley said in an interview by phone, "but I think the gaze is necessary to get that human connection between the painting and the viewer — when you see a painting staring back at you, it confronts you and becomes more personal."

She will come to the Berkshires as part of the Power of Art exhibit of 25 regional artists which opened at the Colonial Theatre last week. There is an opening reception today, celebrating International Women's Day and its 2018 theme, #PressforProgress.

Power of Art began with the 2017 Women's March in Boston and a movement that brought artists together across the country. In January 2017, as a new administration took hold in the White House, people around the world came together in marches and demonstrations to support women, health, immigrants, LGBTQ communities, the environment and more.

Ceramics artist Roxanne Jackson and New York curator and writer Jessamyn Fiore felt exposed and threatened, hearing the new national leadership promise to roll back women's rights, individual rights and abortion rights — and they sent out a call for art.

They would gather almost 600 works of art, and across four days, in the Knockdown Center in Queens, N.Y., they would sell out the show and donate the proceeds, more than $50,000, to Planned Parenthood. They called it the Nasty Women Exhibition, turning around an insult from the presidential campaign.

"What is a nasty woman? Someone not afraid to speak on what they believe in," Greeley said. "Donald Trump called Hilary [Clinton] a nasty woman, and the movement took that and ran with it. I'm a nasty woman — she is too, and look how awesome we are."

"The title's not in-your-face, but it is deliberate. Everyone can express themselves through these peaceful art movements — they're powerful, and no one's getting hurt. I think it's the most powerful way you can protest something."

Jackson and Fiore's event began a national movement with their blessing. More than 30 art shows worldwide have raised more than $181,000, according to Nasty Women Exhibitions. And in the Berkshires, a former Manhattan lawyer and artist, Stephanie Cohen, led a movement to join in.

Last May, Cohen organized an open-call show of her own with some 90 artists, from high school to retirement, who all donated their work and raised more than $6,500 in one night to benefit the Massachusetts ACLU and the Berkshire chapter of the League of Women Voters. Many of the artists in this show were also in the Nasty Women Art Show in the Berkshires — but not all of them. And not all of these artists are women.

That show began a partnership, she said, looking around the sunlit lobby where her newest show hangs. In celebration of International Women's Day and its 2018 theme, #PressforProgress, the Power of Art will support the Elizabeth Freeman Center, one of the county's chief resources for survivors of domestic violence and sexual assault, and BTG Plays' year-round programs, as well as the artists involved.

Cohen has chosen 26 artists in the region and invited photographers Robert and Shana Parkeharrison to curate a high school photography competition as part of the two-month exhibition.

Stockbridge artist Terry Wise, known in the Berkshires for her for still life and kitchen-table scenes, has chosen for this show the daydreaming figure of a woman and a landscape burning — a tree with a fire at its roots. She recalled that scene changing under her brush.

"I was painting over another a painting, and I painted a fire at the base of the tree. Out of the passionate, strong emotion grows this incredible strength."

The woman looks into another world, dreaming of the future, lost in her own thoughts.

"These two paintings don't fit with my tabletop still lifes or travel scenes," Wise said. "They are my own response to emotions. This show is all about women and staying true to ourselves."

Among her fellow artists in the show, some make clear statements, as activists in Stockbridge artist Maurice `Pops' Peterson's collage-like scene hold up signs that read: I'm with her.

Greeley describes her work as nude, edgy and provocative. She remembers fielding questions at campus shows, talking with a football player who seemed to feel that a women who painted the body of women was automatically leaving him out — leaving men out.

"I believe art can change people's minds," she said, "by making unconscious feelings visible to them. Sometimes people think feminism means man-hating or only for women, when really it means equality for both genders."

As a young artist in the Berkshire Nasty Women Art Show, she found support and enthusiasm that has stayed with her in the months since.

"After making this art, spending so long in my studio — this is why I'm doing it," she said, "because of people and events like this. It's about the support and the artists and feeling like you're making a difference.

" In this country and globally, with this political divide, it's good to come together peacefully in a beautiful way. The International Women's Day show is echoing that, supporting women who have done so much — artists, writers, people who attend marches. We're great as women, and we need to celebrate this every day."

When: On exhibit no through April 29

Some of the proceeds from any art sold will benefit the Elizabeth Freeman Center and BTG Plays! year-round educational programs