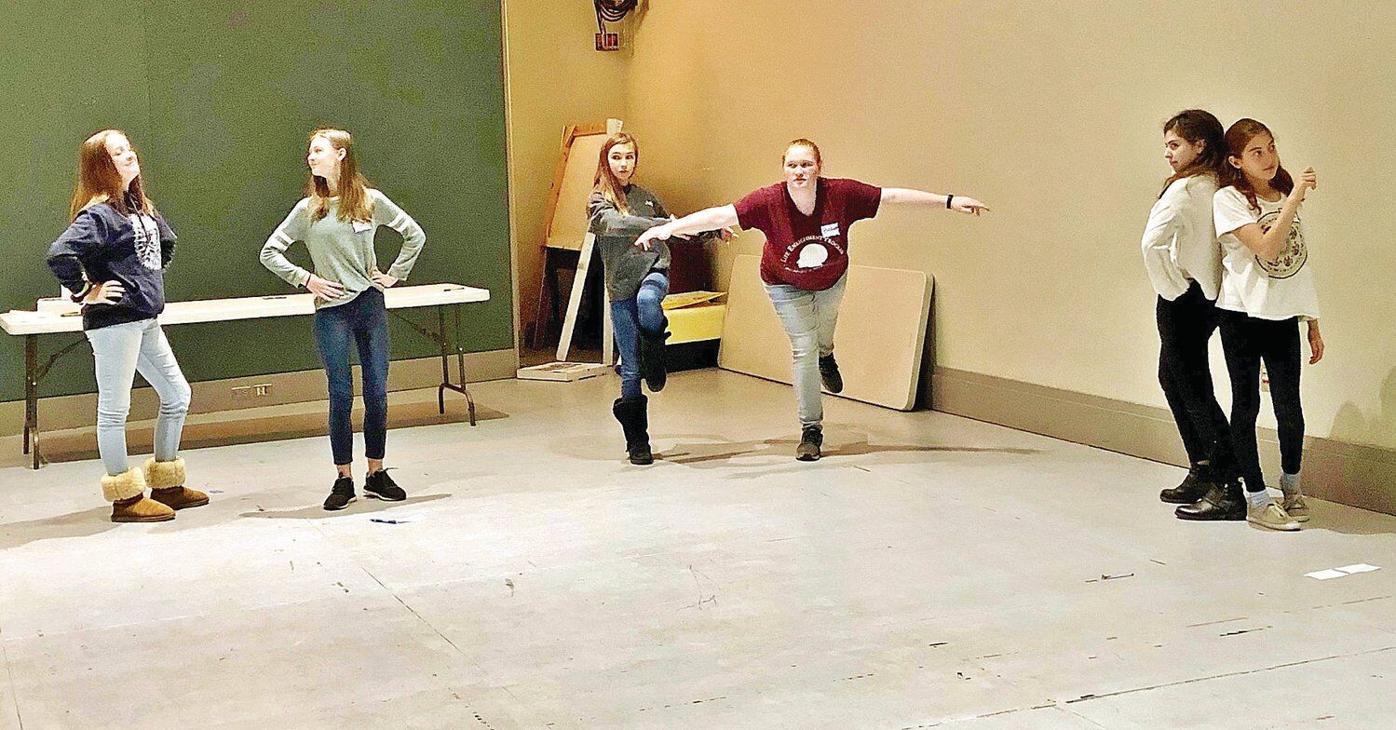 Young women present "identity tableaus" symbolizing how they either see themselves, or how they think others perceive them, during a Paradise Project workshop, presented at Shakespeare & Company in Lenox through a grant-funded partnership between the Flying Cloud Institute and WAM Theatre. 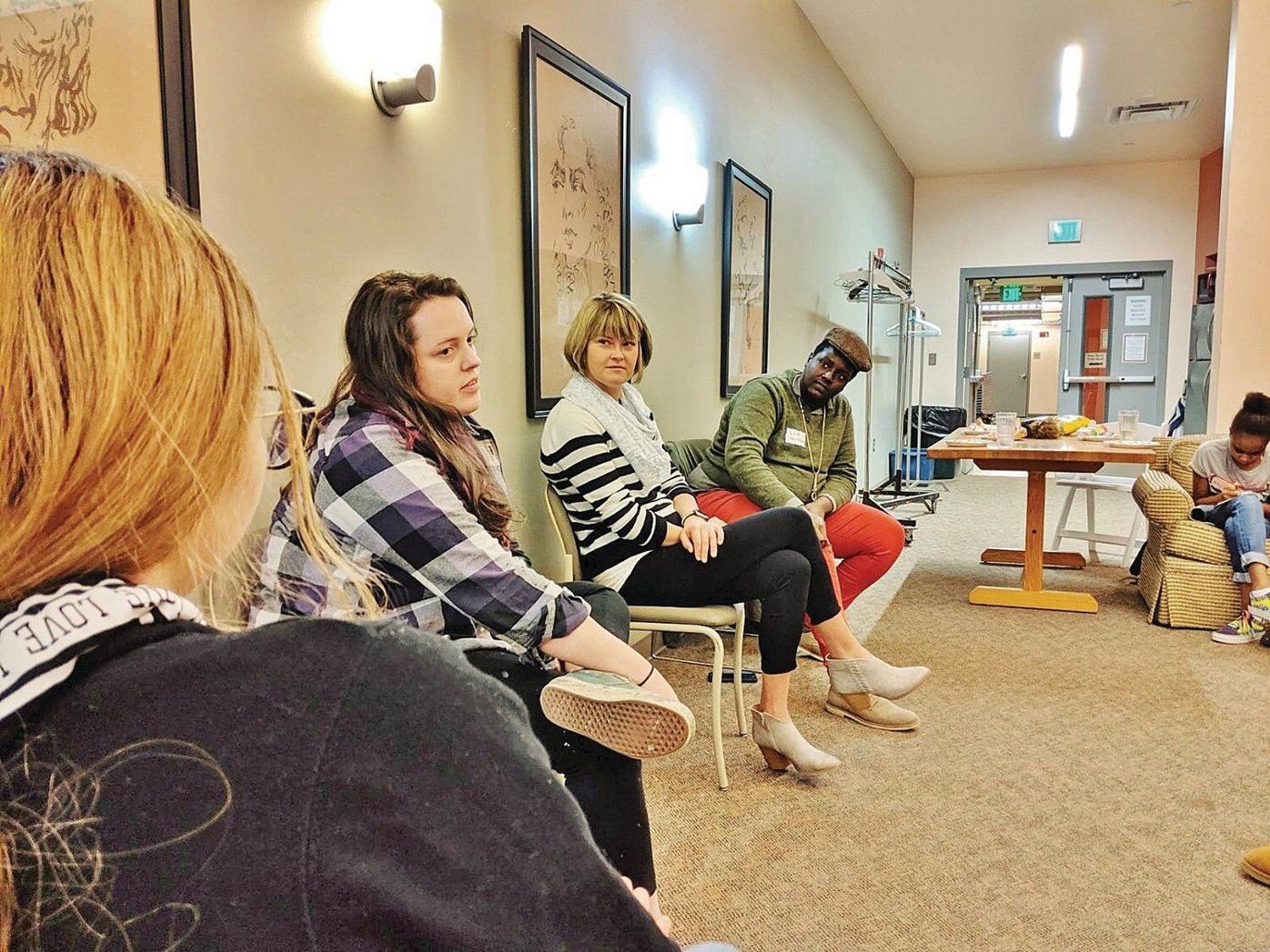 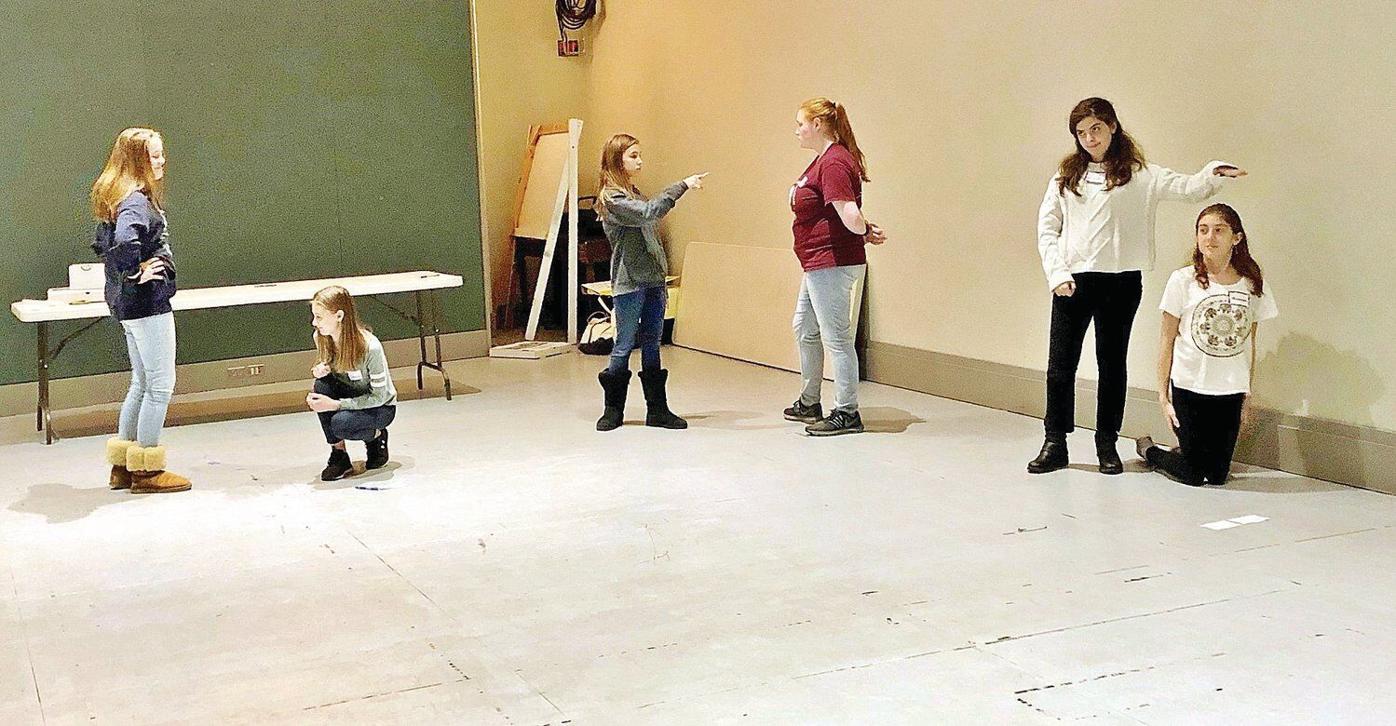 Young women present "identity tableaus" symbolizing how they either see themselves, or how they think others perceive them, during a Paradise Project workshop Saturday, presented at Shakespeare & Company in Lenox through a grant-funded partnership between the Flying Cloud Institute and WAM Theatre. 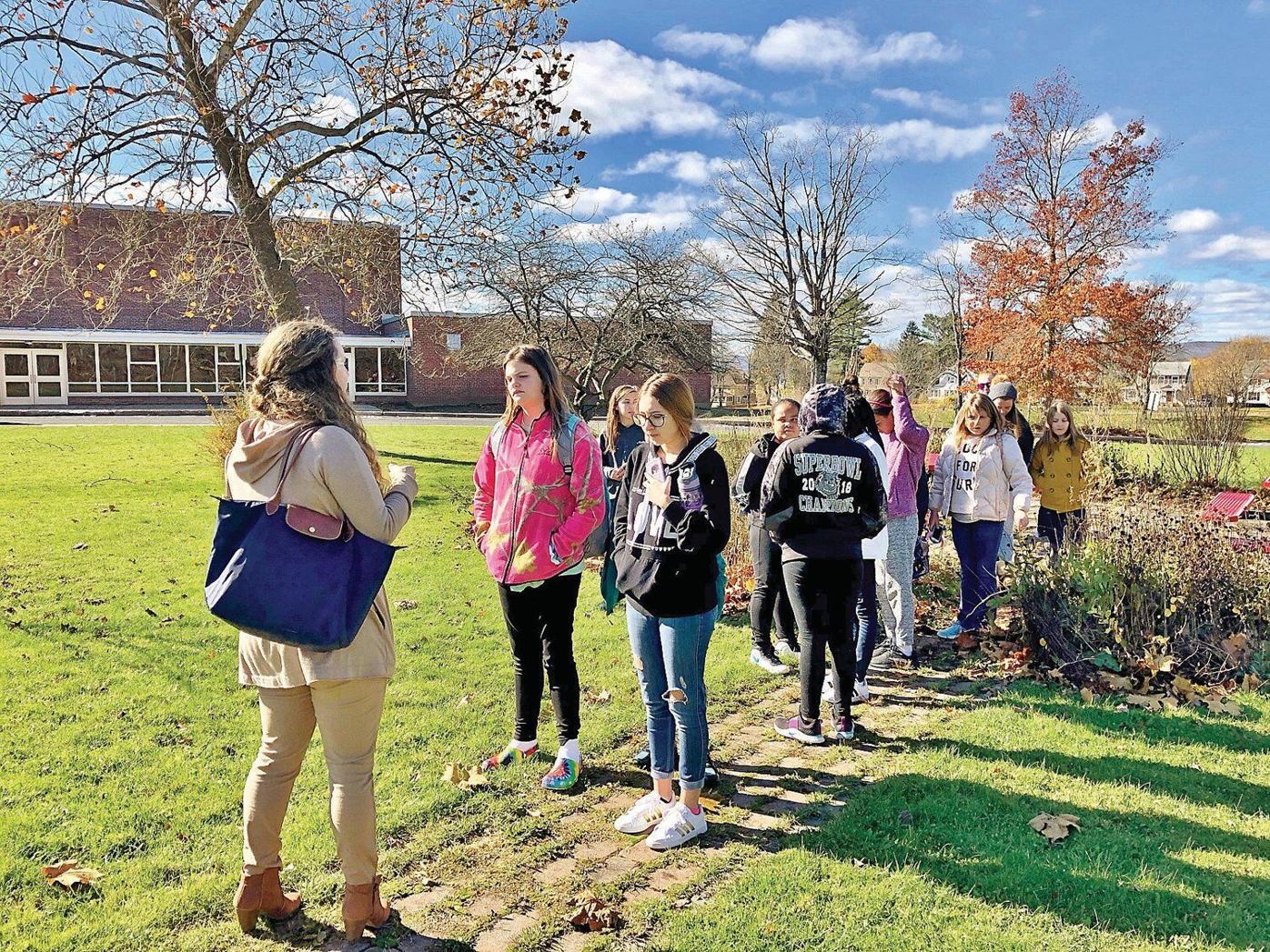 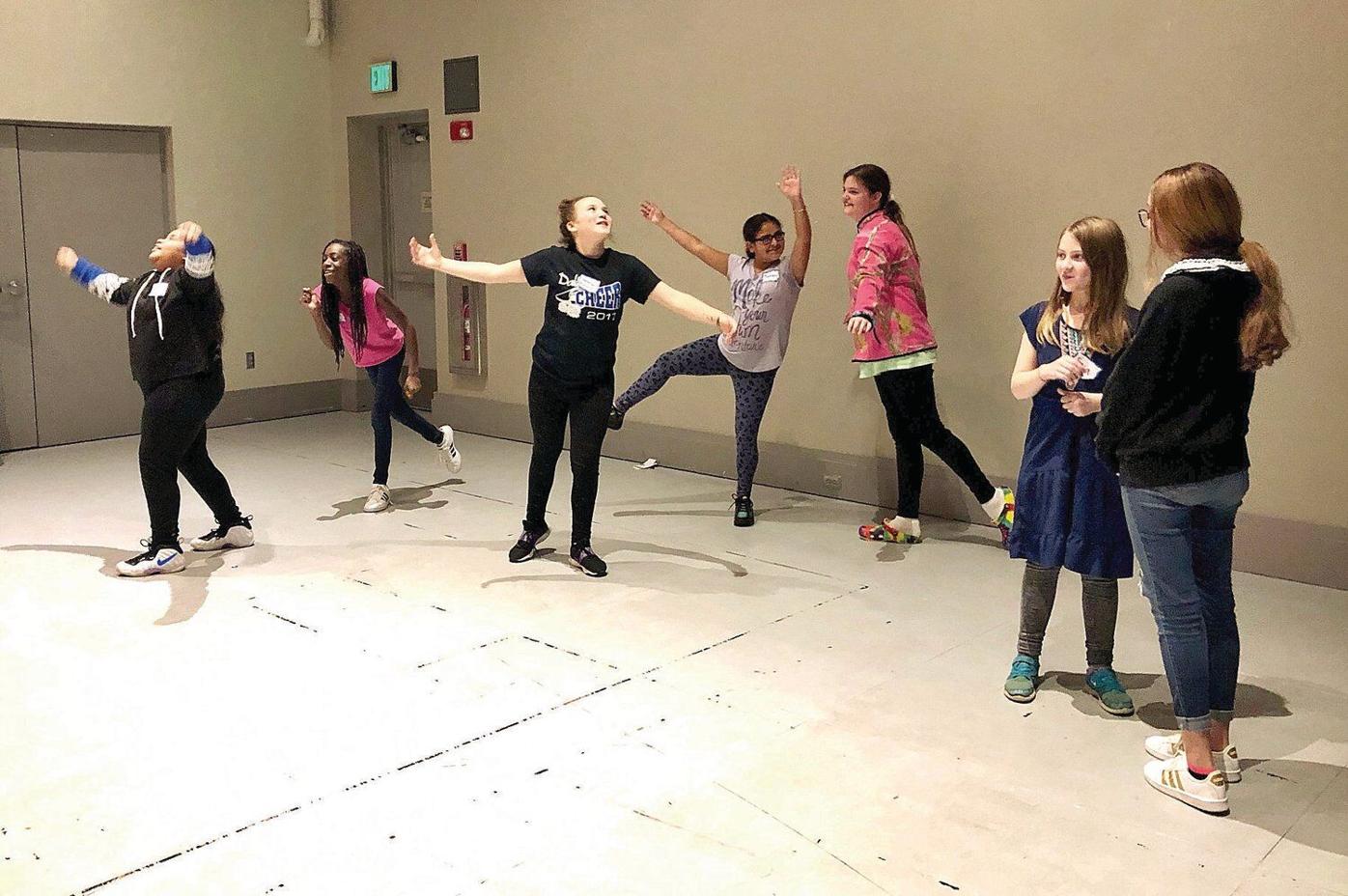 Young women present "identity tableaus" symbolizing how they either see themselves, or how they think others perceive them, during a Paradise Project workshop at Shakespeare & Company in Lenox through a grant-funded partnership between the Flying Cloud Institute and WAM Theatre.

Young women present "identity tableaus" symbolizing how they either see themselves, or how they think others perceive them, during a Paradise Project workshop, presented at Shakespeare & Company in Lenox through a grant-funded partnership between the Flying Cloud Institute and WAM Theatre.

Young women present "identity tableaus" symbolizing how they either see themselves, or how they think others perceive them, during a Paradise Project workshop Saturday, presented at Shakespeare & Company in Lenox through a grant-funded partnership between the Flying Cloud Institute and WAM Theatre.

Young women present "identity tableaus" symbolizing how they either see themselves, or how they think others perceive them, during a Paradise Project workshop at Shakespeare & Company in Lenox through a grant-funded partnership between the Flying Cloud Institute and WAM Theatre.

Joy said she was interested in the program because "I love learning about planets and chemicals."

Asked whether it is important to her to have more women in STEAM — science, technology, engineering, art and mathematics — fields, she nodded and said, "Yeah, because I want to be a doctor."

The young aspiring doctor was among 17 young women who got together at the Elayne P. Bernstein Theatre of Shakespeare & Company on Nov. 2 to explore their current interests and potential future roles in science, art and society.

While the number of women studying and being employed in science, technology, engineering and math fields has increased — in some fields, nearly doubling and tripling — over the past two decades, significant gaps persist when it comes to pay rates for women versus men, and rates of employment for women of nonwhite races and historically underrepresented ethnicities.

Girls like Joy have an uphill struggle — only 44 percent of diagnosing and treating practitioners are women, in contrast to the 71 percent of women occupying health-related roles, such as nurse practitioners, dietitians and physician assistants, according to science and engineering indicators published by the National Science Board.

The program stems from an expanding, grant-funded partnership between the Flying Cloud Institute and WAM Theatre.

This series of workshops on the history and sociology of science, and the cultural biases around gender, religion and race that long have existed in STEAM fields, launched with the field trip to Shakespeare & Company. The afternoon concluded with the group seeing a staged reading of Laura Maria Censabella's play "Paradise," which inspired the project's name.

The play is about about a female Yemeni-American Muslim student at a struggling high school in the Bronx, N.Y., who tackles a neurological study with her seemingly disaffected, Southern white male science teacher.

Flying Cloud Executive Director Maria Rundle said the characters in the play grapple with issues of science and society that will be explored in future workshops.

Lia Russell-Self, associate producing director of WAM Theatre, then facilitated a panel discussion with professor Emily Hamilton, a physicist who teaches the history of science at the University of Massachusetts-Amherst, and Devon Drohan, a designer and theater technician acting as production designer for Shakespeare & Company's Fall Festival of Shakespeare.

Russell-Self, who also is a Flying Cloud board member, shared their experience of evolving a passion for actuarial science into theater production, performance and administration.

The three panelists tailored their talks to the theme of mentorship, and how their role models helped them find their way in traditionally male-dominated fields. Drohan noted that because of this, most of her mentors also have been men, and called the lack of experienced female STEM mentors "really sad."

Gender aside, Drohan said, the most meaningful part of mentorship is finding someone who recognizes a student's interests and passions toward particular subjects and fosters pathways to explore them.

She cited her own theater professor at UMass: "He noticed a passion in me and was able to help fuel that by asking me questions about what I was interested in. That helped me say, `I want to do this,' and `I want to learn more about this,' " she said.

"With mentors, it's a two-way street. You have to let your teachers know what you're interested in, too."

Hamilton said she was lucky to have parents — both scientists — who nurtured her passions for math and science, as well as teachers.

She recalled a middle and high school teacher who introduced her to and inspired her to study physics.

"I loved physics and the fact that you could calculate what happens if you roll something down the hill; that there's a really simple mathematical equation that shows you how the world works," Hamilton said.

She told the students that they also can find mentors outside their fields of study who can be just as helpful and inspiring.

Russell-Self spoke about a teacher from Trinidad they met in preschool who gave them advanced math and reading challenges to work on, and a high school math teacher who told them about early college options.

"I went to college when I was 15 years old," Russell-Self told the students. "One of the lovely things about learning the depths of equations is that they can be applied to a lot of different things in life."

Russell-Self then led an activity for the group to help members explore their own identities. The girls were asked to first write down on an index card how they thought people perceived them, and how they would like to be seen. Then, the students worked together to create "identity tableaus," scenes made through posing in action or as an object, to symbolize the contrasting identities.

"One little girl wrote on her index card that others see her 'as a little girl, shy and too quiet,' but that she sees herself as 'an artist,' " Rundle said in an email. "The front of the card had tiny, squashed together letters. And on the back her writing was big and bold. Several girls wrote that they were already seen the way that they wanted to be seen when it came to being nice and kind. But they wanted to add one more word to describe themselves when it came to how they saw themselves: smart."

Rundle said the event included girls from six schools from across Flying Cloud's Girls Science Club, STEAM Team, Mentorship and STEM Summer programs. The Paradise Project will offer two more workshops, with Hamilton visiting Flying Cloud's STEAM Team at Reid Middle School to work with the girls on identity collages and develop the work they started with Russell-Self on Saturday.

In January, students from Williams College will visit the STEAM Team program to see the girls' collages and learn from the girls about women in STEM fields who have overcome gender, race and class discrimination to achieve success.

Flying Cloud educators will continue working with the girls throughout the year at Reid, and employ mentors from Pittsfield and Taconic high schools as part of this project.

Among those mentors are Brodiann Magner, 17, and Sara Nava, 16, both of Taconic High School.

Nava, who said she initially signed up to be a mentor for the extra income, said she now is growing an interest in science and has developed a new sense of patience in working with the younger students.

"It's a really great environment to be in and a safe space," Nava said.

Magner said the latter is important because "Some of the girls get put down for being girls and doing science. We understand where they're coming from."

Jenn Smith can be reached at jsmith@berkshireeagle.com, at @JennSmith_Ink on Twitter and 413-496-6239.