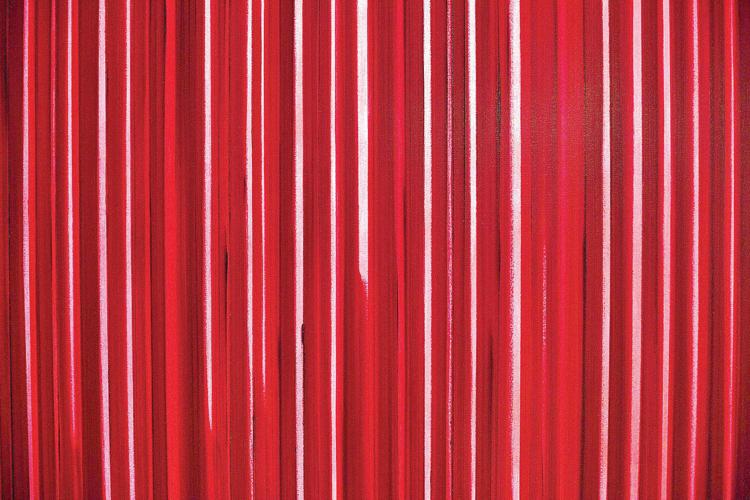 "It is vast, but it's also very, very simple," said Rachel Howard of her new exhibit.

Rachel Howard's take on violence is expressed through crimson paint at Mass MoCA. 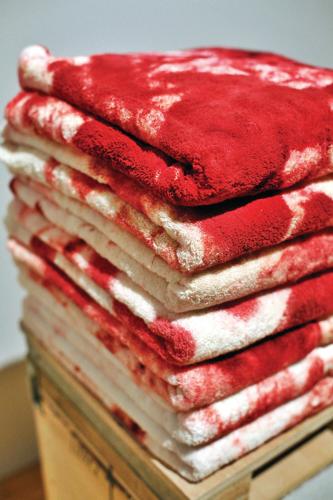 There is a sculptural element to Howard's work, a folded pile of white towels that she used to clean the t-squares.

"It is vast, but it's also very, very simple," said Rachel Howard of her new exhibit.

Rachel Howard's take on violence is expressed through crimson paint at Mass MoCA.

There is a sculptural element to Howard's work, a folded pile of white towels that she used to clean the t-squares.

A former spot painter for Damien Hirst in the 1990s, Howard is now an acclaimed abstract painter, with the British newspaper The Telegraph proclaiming her "one of the finest abstract painters of her generation." Her focus on dark topics, like sin and suicide, has garnered attention by highlighting the physicality and intensity of the work.

Her new show at Mass MoCA, "Paintings of Violence (Why I Am Not a Mere Christian)" consists of 10 abstract oil paintings and one sculptural object created from 2011 to 2016, placed to surround the Joseph Beuys sculpture, "Lightning with Stag in its Glare."

"These paintings, they weren't made to have a home," Howard said. "They were just made because I wanted to make them."

This freedom gave Howard the time to be as deliberate as the violence the work was a reaction to, working on canvases concurrently and applying red oil paint on top a blinding, fluorescent pink acrylic base coat.

Howard had T-squares specially made for this project, and used canvases that were equal to her height and her arm span. She applied the alizarin crimson oil paint straight from the tube and with the guidance of the T-squares, lacerated her brush down the surface and applied further layers.

"When you push the oil on top of it, it's so luscious, and obviously it recalls flesh, wound, blood, the stuff of life, the stuff of death," said Howard. "It's so visceral and when you slice it down the canvas where it butts up against the fluorescence, this kind of crazy synergy happens between the two colors. I put a varnish over the top so it makes it zing even more."

Howard says she started with the work as a way of coping with a barrage of violence from the news and realization that it had reached a point of confusion where she could no longer distinguish the source of whatever atrocity she was hearing about. For her it came on like a "tidal wave of endless and repetitive violence."

The performance aspect of creating the works is important to Howard, and the repetition of her actions on canvas are crucial to her own contemplation of the issues. Howard added a sculptural element to the work, a folded pile of white towels that she used to clean the T-squares with placed on top of a simple wooden box structure. They are evidence of the physicality of her creation, proof that the action took place, as well as a link to religious aspects of the work.

"With this idea of making an environment, mentally and physically, physical repetition is important," Howard said. "And I'd say slightly neurotic, too."

Howard points to the Christian rite of washing feet as it relates to Jesus, or the Islamic washing ritual for purification as she considers her own action as an artist cleaning this T-square of paint.

The box that holds the towels is also an acknowledgement of the famous photo from Abu Ghraib, in which the Iraqi prisoner is fit with a hood and attached to electric wires. The photo horrified and stuck with Howard enough that the box has appeared in previous paintings. In the annals of the banality of evil, it seemed remarkable to Howard that someone had purposefully gone and gotten a box for the expressed purpose of stripping a human of his humanity through display.

Howard's work often has to do with religion. She says that it's always in her brain, following a lifetime of religious education, followed by her adult life as an atheist and a career with work inspired by the Ten Commandments and the Stations of the Cross. The title for this show is taken from two texts combined, one from Bertrand Russell, the other from C.S. Lewis.

"I'm really fascinated by religion and its dynamics," she said. "You can't live in the world today and not want to engage with everything that is going on, and religion is often the basis of this, for better or worse. It's not like I'm some aggressive atheist or anything like that. It's more to do with these two polemics."

Though she doesn't consider herself a political artist, she also acknowledges that it's no longer possible to dismiss a political context to just about anything. She sees painting as her way of disseminating the information, perhaps second to religion in her primary concerns with work, but accepting of the idea this work in particular might be "where the two meet."

And though what lies behind the work can seem towering, Howard hopes that a first reaction to the work is a visceral one relating to its physical presence. All the cerebral stuff can come later, if at all, but the intensity of the artist lays right there on the surface of the canvas.

"It is vast, but it's also very, very simple," she said. "Of course, I'm talking about big things, but also it's just about someone in the studio painting a painting in this very repetitive way."