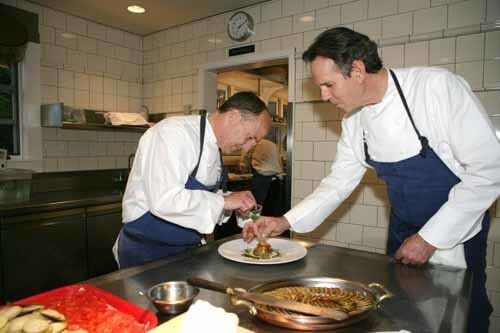 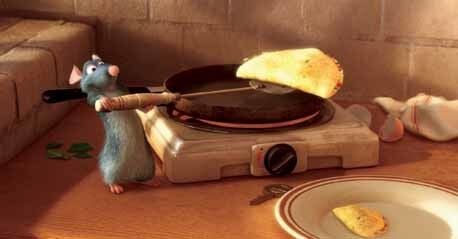 "Ratatouille," Pixar's new film about one rat's dream of haute cuisine, came by its acting chops the old-fashioned way, turning to real-life chef Thomas Keller for the inside dish on kitchen kinetics.

Keller's stint as rat-a-tutor was part of an intensive prepping effort that included signing up the Pixar crew for cooking classes and sending filmmakers to dine in fine French restaurants.

The idea was to make sure the computer animation turned the gourmet goodness cooked up by Remy — the lead rat in "Ratatouille" — into a feast for the eyes.

"It was important that it looked really appetizing," said Kim White, the movie's lighting supervisor at Emeryville-based Pixar Animation Studios. "The food needed to look absolutely as beautiful as it could look."

So, sauces gleam with a rich patina, soups bubble with a palpable zest, chopped celery flies into a pot in a celadon whirl.

The finished product looks effortless, but it wasn't.

"Going into the movie we knew food was going to be hard," said Apurva Shah, the movie's effects supervisor. "Food is almost the opposite of a lot of computer stuff. It's organic. It's sloppy. It's fluid."

For the chopping sequences, Shah and his colleagues used what they learned from cooking class and watched videos of kitchen work to figure out such things as what kind of marks should be left on the board and whether to have little pieces of food clinging to the knife. The biggest challenges were the more elastic foods — how to make dough squish and bulge and wine slosh and swirl into glasses.

For Keller, the partnership began some years ago when the filmmakers asked if they could observe the French Laundry kitchen. "I said, 'Of course!"' Eventually, he was asked to make a version of the film's titular dish and also got a few lines as a restaurant patron. "It was the way I like things to happen; it just became a relationship," Keller said.

The joy of cooking is central to the movie, which revolves around Remy's efforts to teach hapless kitchen garbage boy Linguini how to cook.

Really, it's Remy doing the cooking, hiding under Linguini's toque and controlling the youth by pulling on his hair.

Rats in the kitchen aren't everyone's idea of a recipe for success. But filmmakers played down the "Willard" factor by making Remy a fiend for hygiene, a characteristic that is true to life said White, who has rats as pets. At one point, the conscientious Remy runs a pack of rat cooks through a dishwasher before letting them loose on the food.

The climactic scene comes as Remy and a host of fellow rats race to make a dish of ratatouille toothsome enough to win over snooty food critic Anton Ego.

Traditional ratatouille is a rustic vegetable dish, but for the movie, Keller created an elegant, layered version, tasty enough to melt the heart of even the crustiest critic.

For Keller, the ensuing scene where Ego realizes that great cooks can come from unexpected places resonated personally — "certainly as a restaurateur, as somebody else who didn't specifically have any formal training, just was very determined to be a good cook," he said. "How he came to realize that it does not necessarily have to be somebody who is a figurehead ... that was an important part for me."

Here is Remy's ratatouille recipe, from the movie with the same name as the dish, courtesy of Thomas Keller.

Unlike traditional ratatouilles, this recipe calls for layering vegetables in a spiral on top of a piperade. You could also layer the vegetables in stripes, if you find that easier.

For the piperade (bottom layer):

To make the piperade, preheat oven to 450 °F. Line a baking sheet with foil. Place pepper halves on the baking sheet, cut side down. Roast until the skins loosen, about 15 minutes. Remove the peppers from the oven and let rest until cool enough to handle. Reduce the oven temperature to 275 F.

Peel the peppers and discard the skins. Finely chop the peppers, then set aside.

In medium skillet over low heat, combine oil, garlic and onion and saute until very soft but not browned, about 8 minutes.

Add the tomatoes, their juices, thyme, parsley and bay leaf. Bring to a simmer over low heat and cook until very soft and little liquid remains, about 10 minutes. Do not brown.

Add the peppers and simmer to soften them. Discard the herbs, then season to taste with salt. Reserve a tablespoon of the mixture, then spread the remainder over the bottom of an 8-inch oven-proof skillet.

To prepare the vegetables, you will arrange the sliced zucchini, eggplant, squash and tomatoes over the piperade in the skillet.

Begin by arranging 8 alternating slices of vegetables down the center, overlapping them so that 1/4 inch of each slice is exposed. This will be the center of the spiral. Around the center strip, overlap the vegetables in a close spiral that lets slices mound slightly toward center. All vegetables may not be needed. Set aside.

In a small bowl, mix the garlic, oil and thyme, then season with salt and pepper to taste. Sprinkle this over vegetables.

Cover the skillet with foil and crimp edges to seal well. Bake until the vegetables are tender when tested with a paring knife, about 2 hours. Uncover and bake for another 30 minutes. (Lightly cover with foil if it starts to brown.)

If there is excess liquid in pan, place it over medium heat on stove until reduced. (At this point it may be cooled, covered and refrigerated for up to 2 days. Serve cold or reheat in 350 F oven until warm.)

To make the vinaigrette, in a small bowl whisk together the reserved piperade, oil, vinegar, herbs, and salt and pepper to taste.

To serve, heat the broiler and place skillet under it until lightly browned. Slice in quarters and lift very carefully onto plate with an offset spatula. Turn spatula 90 degrees as you set the food down, gently fanning the food into fan shape. Drizzle the vinaigrette around plate.

Copyright © 2006 Associated Press. All rights reserved. This material may not be published, broadcast, rewritten or redistributed.