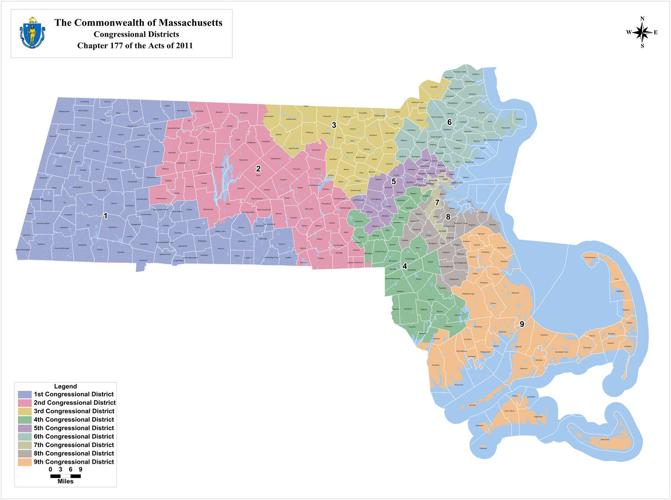 The 1st Congressional District, shown in dark blue at left, after the redistricting of 2011. 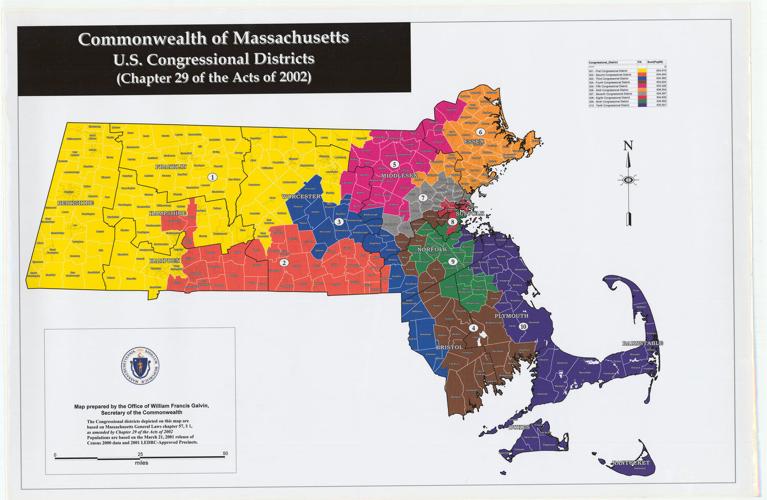 The 1st Congressional District, shown in yellow, prior to the 2011 redistricting.

The 1st Congressional District, shown in dark blue at left, after the redistricting of 2011.

The 1st Congressional District, shown in yellow, prior to the 2011 redistricting.

But it had once been regarded as a Berkshire County seat.

After the 1st District was established as Massachusetts' westernmost district in 1893, Berkshire representatives held the seat until 1991 with the exception of the 1945-59 tenure of Greenfield's John Heselton. Since John Olver of Amherst succeeded Pittsfield's Silvio Conte in 1991, however, no Berkshire resident has held the seat.

"It hasn't been a Berkshire seat now since John Olver won it," said state Rep. John Barrett III, D-North Adams. "This seat has now shifted to the east more and more because of the loss of population in the Berkshires and Franklin County. They weren't going to merge any down east because that's where population was growing."

A merging of districts following the 2010 U.S. Census — as Massachusetts had its 10 House seats cut to nine — led to the inclusion of Springfield for the first time. Both candidates in Tuesday's Democratic primary, U.S. Rep. Richard Neal of Springfield, and Holyoke Mayor Alex Morse, hail from Hampden County.

"It's almost as if we're destined to be represented by someone from down there forever," said Jim Mahon, the Woodrow Wilson professor of political science at Williams College and the chairman of the Williamstown Democratic Committee. "I don't see how somebody from Berkshire County could win — I don't know."

Neal, who represented the 2nd District from 1989 until the merger, became the 1st District's representative in 2013. In his current role, Neal has participated in 731 public events, according to a list shared by his campaign.

Of those appearances, 499 have come in Hampden County, with 312 in Springfield alone. Berkshire County has been the site of 125 appearances, with Pittsfield seeing 61 of them. The U.S. Census website estimates Hampden County's population at 466,372 and Berkshire County's at 124,944. Springfield's and Pittsfield's population estimates were 153,606 and 42,142, respectively.

Ashley Wright and George Lawrence, two North Adams Republicans, represented the district from 1893-97 and 1897-1913, respectively, before Allen Treadway, a Stockbridge Republican, served from 1913-45.

After Heselton's tenure, Conte held the seat from 1959-91. Though a Republican, Conte voted with the other party so often that he sometimes received a 90 percent approval rating from the left-leaning Americans for Democratic Action.

When Conte died in 1991, The New York Times called him a "longtime battler for the underdog," and he was, in The Washington Post's words, "one of Congress's most beloved and respected members."

Even in 1991, Berkshire County played a significant role in electing then Olver, then a state senator, who notched a 70,022-68,052 general election victory — a 1.4 percent margin — over Steve Pierce, a Westfield Republican and the Massachusetts House minority leader.

While Pierce won some traditionally Democratic cities, like Holyoke, and amassed a 9,102-vote margin in Hampden County, Olver managed a 52.8-45.4 percent victory in Berkshire County, a 2,865-vote margin, on top of a 6,685-vote win in Hampshire County. Olver won Pittsfield, then the largest of the district's 95 municipalities, by 1,740 votes.

"They split the vote," Barrett recalls. "If there had been one of them at the time, the Berkshire candidate may have won the seat."

Olver himself garnered a reputation as a reliable liberal vote and someone who "really showed up for communities," said state Sen. Adam Hinds, D-Pittsfield, who worked for Olver in the late 1990s.

"What always struck me was his willingness to hop in a car to go to a local meeting, then turn around and go back home," Hinds said. "We always called him a workhorse, not a showhorse."

While Olver in 1991 became the first Democrat to hold the seat following a long line of Republican congressmen, it is now difficult to see the seat flipping to the GOP anytime soon, Mahon said. The shift of the 1st District from Republican to Democratic hands reflects a national and regional realignment as the growing dominance of Southern interests in the Republican Party alienated Northeastern voters, who had once been drawn to the party's antislavery position in the Civil War.

Yet the district isn't monolithic, and some believe Berkshire voters fall further left on the political spectrum than those in the eastern part of the district. Moreover, Franklin and Hampshire counties — which both have municipalities in the 1st District — joined Suffolk County as the only three of Massachusetts' 14 counties to opt for Bernie Sanders over Joe Biden in the 2020 Democratic presidential primary.

There might be more voters in Berkshire County who would cast votes on environmental issues alone than in Hampden County, Mahon added.

"The Berkshires are more progressive and liberals," Barrett said. "This is a strange district."