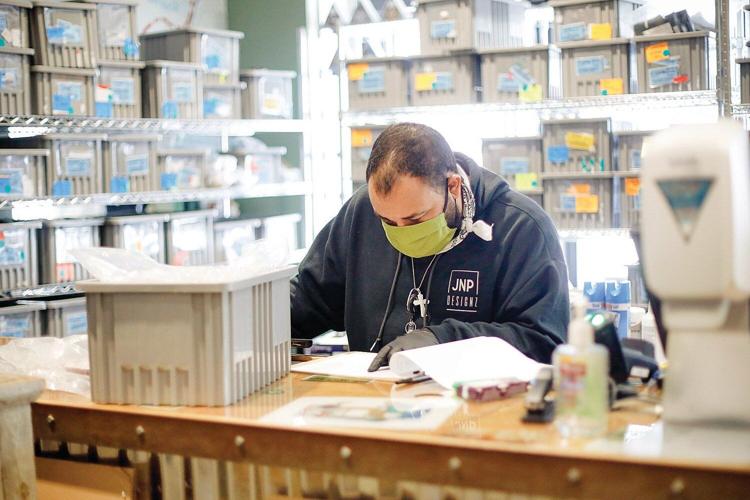 Paul DeLeon makes an inventory audit Wednesday at Canna Provisions in Lee. After two months of being closed due to being classified as a nonessential business, Canna Provisions and other adult-use recreational marijuana facilities are gearing up for a limited reopening on Monday. 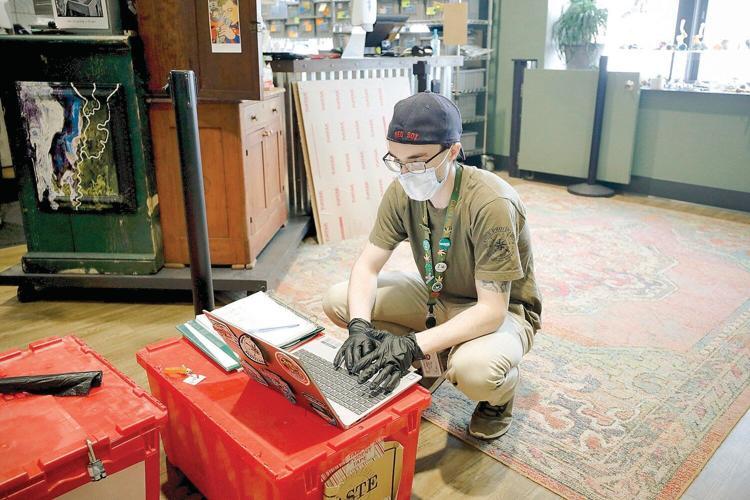 Paul DeLeon makes an inventory audit Wednesday at Canna Provisions in Lee. After two months of being closed due to being classified as a nonessential business, Canna Provisions and other adult-use recreational marijuana facilities are gearing up for a limited reopening on Monday.

LEE — Nate Roy crouched in front of a MacBook on the still-closed sales floor of Canna Provisions on Wednesday, logging expired edibles, concentrate and flower bound for disposal.

The retail value of the expired product was about $1,000 — a fraction of potential revenue lost in the approximately two months since the state, in March, suspended sales of adult-use cannabis, according to Meg Sanders, chief executive and owner of Canna Provisions.

"We've lost, estimated, $4 million in revenue over the past few months," Sanders said. Based on the local tax rate of 3 percent of sales and Canna's so-called community impact fee, which also is equivalent to 3 percent of sales, Chief Marketing Officer Sean Curley projected that his company's losses equate to $240,000 in lost revenue for the town.

"It's been frustrating," co-owner Erik Williams said outside the Housatonic Street dispensary. "We knew before we were shut down that if anyone could do retail safely, we could."

Canna Provisions was forced to shut its doors to customers after Gov. Charlie Baker declared a public health emergency amid the coronavirus outbreak and ordered nonessential businesses to close. Medical dispensaries were deemed essential and allowed to continue operations, with a new set of restrictions.

Roy was one of several masked and gloved employees who filtered in and out of Canna midweek, when representatives from local dispensaries said they anticipate pent-up demand will be high and pointed to the sharp uptick in applications for medical cards during the closure as evidence.

"It's been two months, and we know a lot of people rely on recreational cannabis as medicine, but not everyone is comfortable getting a medical license," said Brandon Morphew, marketing director for Temescal Wellness in Pittsfield.

On Monday, the company will add recreational to the curbside medical operations it has been running from its dispensary on Callahan Drive. Morphew said customers will be summoned via text message to pick up preordered products, and that he is confident that the expected uptick in customers won't create a traffic nightmare.

Industry backers and advocates criticized Baker's decision to deem adult-use operations "nonessential," and a group of recreational dispensaries sued the governor in April. A judge ultimately ruled in favor of Baker, who had argued that dispensaries attract out-of-state customers who could be carrying COVID-19.

Morphew said many Temescal customers drive in from New York, which, public health officials say, is the national epicenter of the coronavirus outbreak. He noted that curbside customers are expected to wear masks, and while cashless transactions are preferred to reduce hand-to-hand cash transfers, cash sales will be permitted in the dispensary's front vestibule.

Bloom Brothers received approval to open its dispensary in Pittsfield a few months ago but didn't open until early March — just before state restrictions went into place to curb the virus. The company said in a Facebook post Wednesday "we are working diligently to meet the new standards and guidelines set forth by the [Cannabis Control Commission] and health officials," but did not announce a curbside reopening date.

Adult-use dispensaries are one type of business suffering during the pandemic, but they contribute to the gloomy economic outlook many municipalities face. For example, Great Barrington's adult-use and medical dispensary, Theory Wellness, generated $535,000 for the town during one quarter last year. The dispensary also is set to begin curbside recreational sales Monday.

Thomas Winstanley, marketing director for Theory, said that while the business remained open for medical sales, "we were down 90 percent of revenue" during the moratorium on recreational sales, forcing the business to furlough "a very large percentage" of its employees.

"Recreational sales do drive most of our revenue, so, not having that has been one of the most significant challenges our business has faced," Winstanley said.

Because marijuana remains illegal in the eyes of the federal government, Sanders said Canna was not eligible to receive a federal Payroll Protection Program loan and also had to furlough the majority of employees. She is hopeful they will be able to rehire most of those employees — working under a strict new set of rules.

"The industry is poised to shine in this very regulated space," she said. "We're already the most regulated industry anyway."

Bloom Brothers, a recreational cannabis shop on Merrill Road in Pittsfield, had a strong first year — so strong, in fact, that it is seeking city approval to add parking on an adjacent parcel.