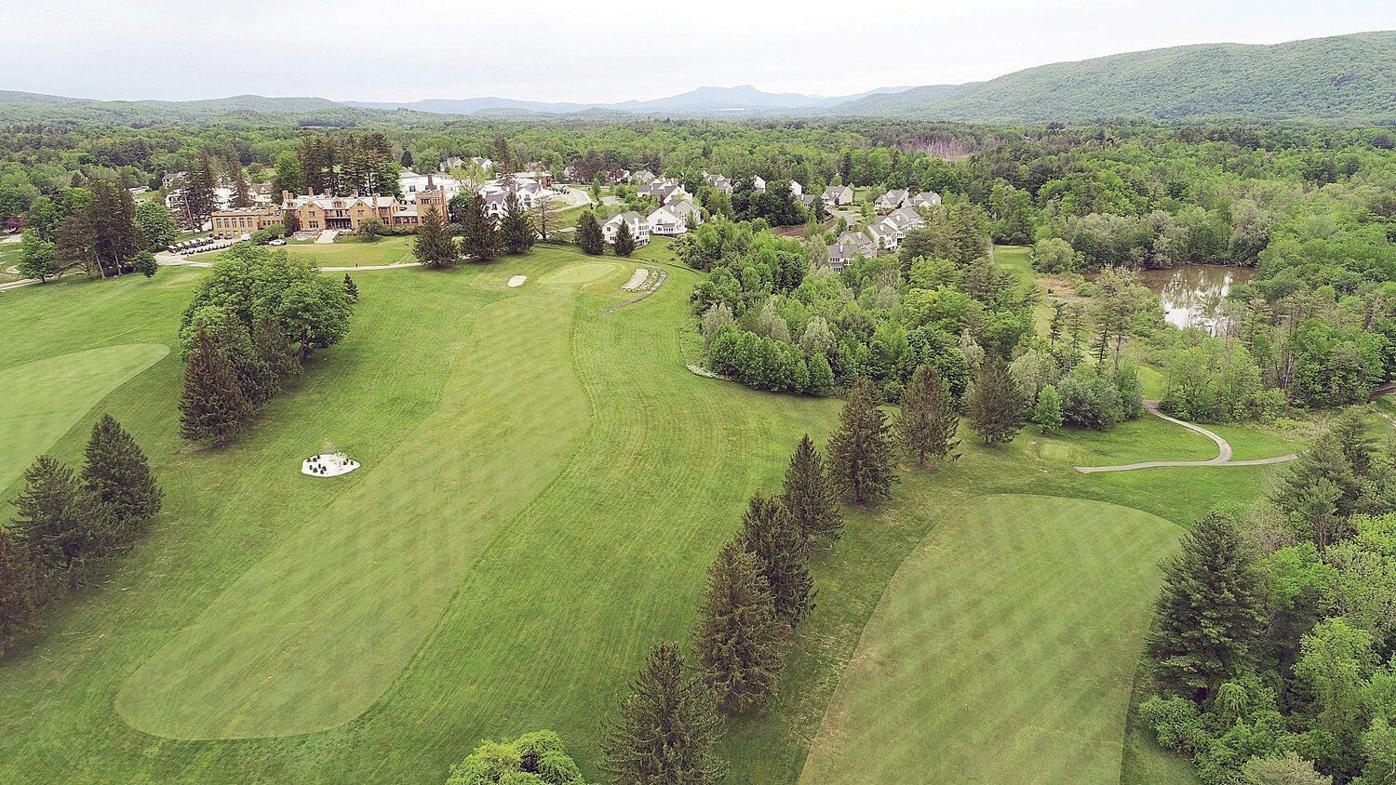 "We realistically touched 16 of the 18 holes in some capacity," said Luke Salvatore, Director of Golf at Miraval Berkshires. 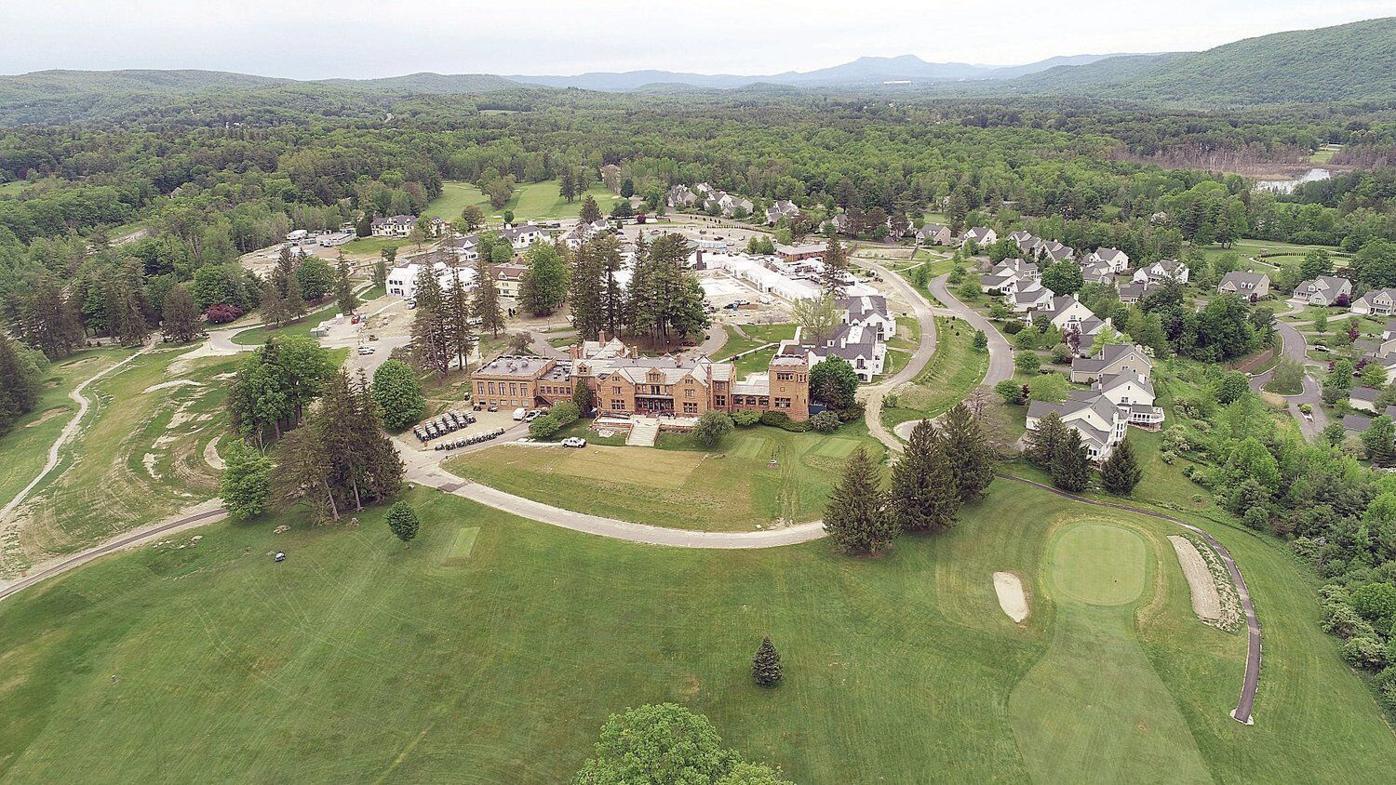 With plenty of work being done to the Wyndhurst Manor & Club on the Miraval Berkshires property, it is worth noting that the golf course surrounding the manor has seen significant changes, as well. 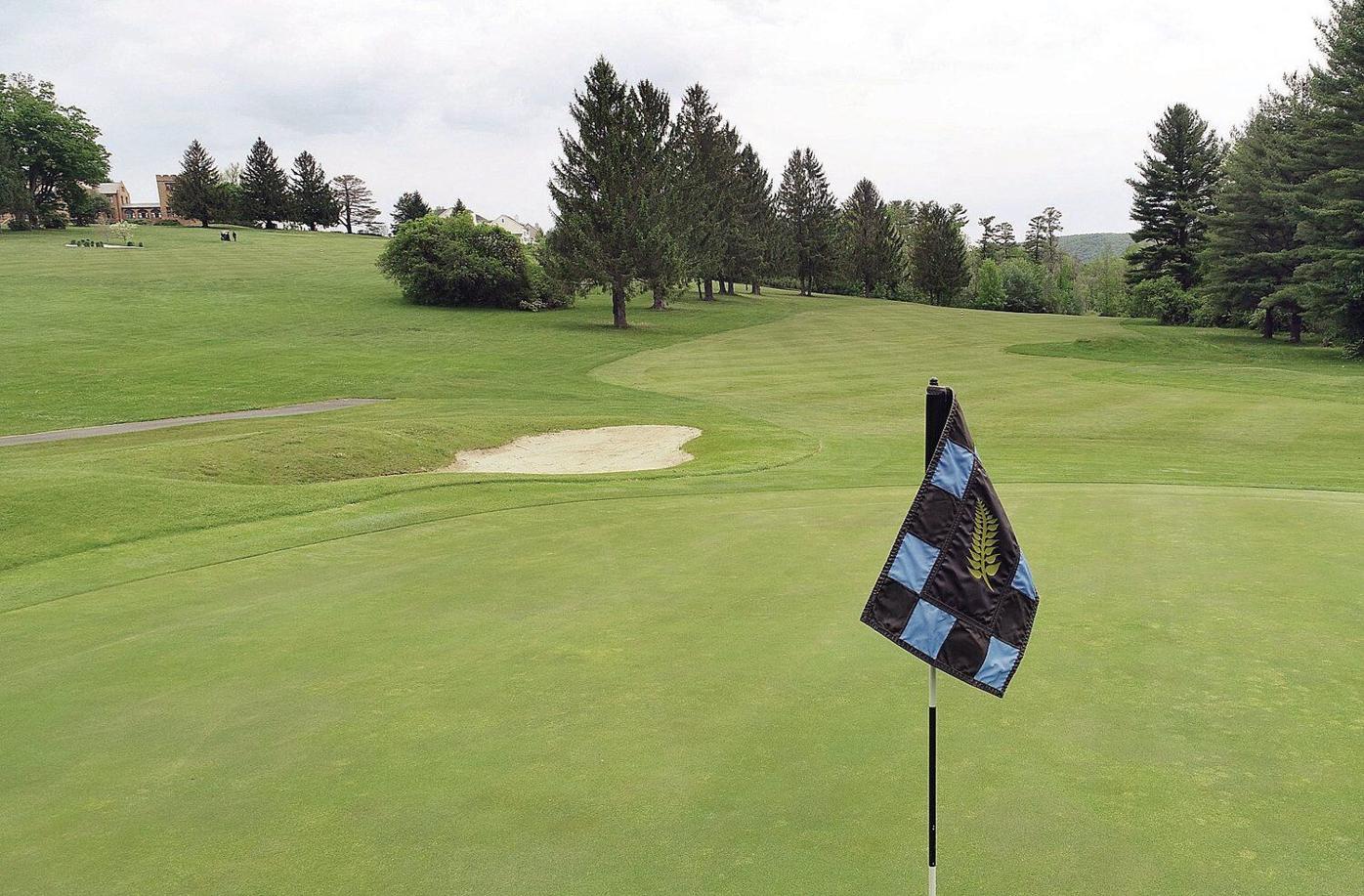 The Miraval Berkshires golf course is pictured here on June 2. The course has undergone a significant reconfiguration, matching the work being done at the rest of the Miraval resort, including the Wyndhurst Manor & Club. 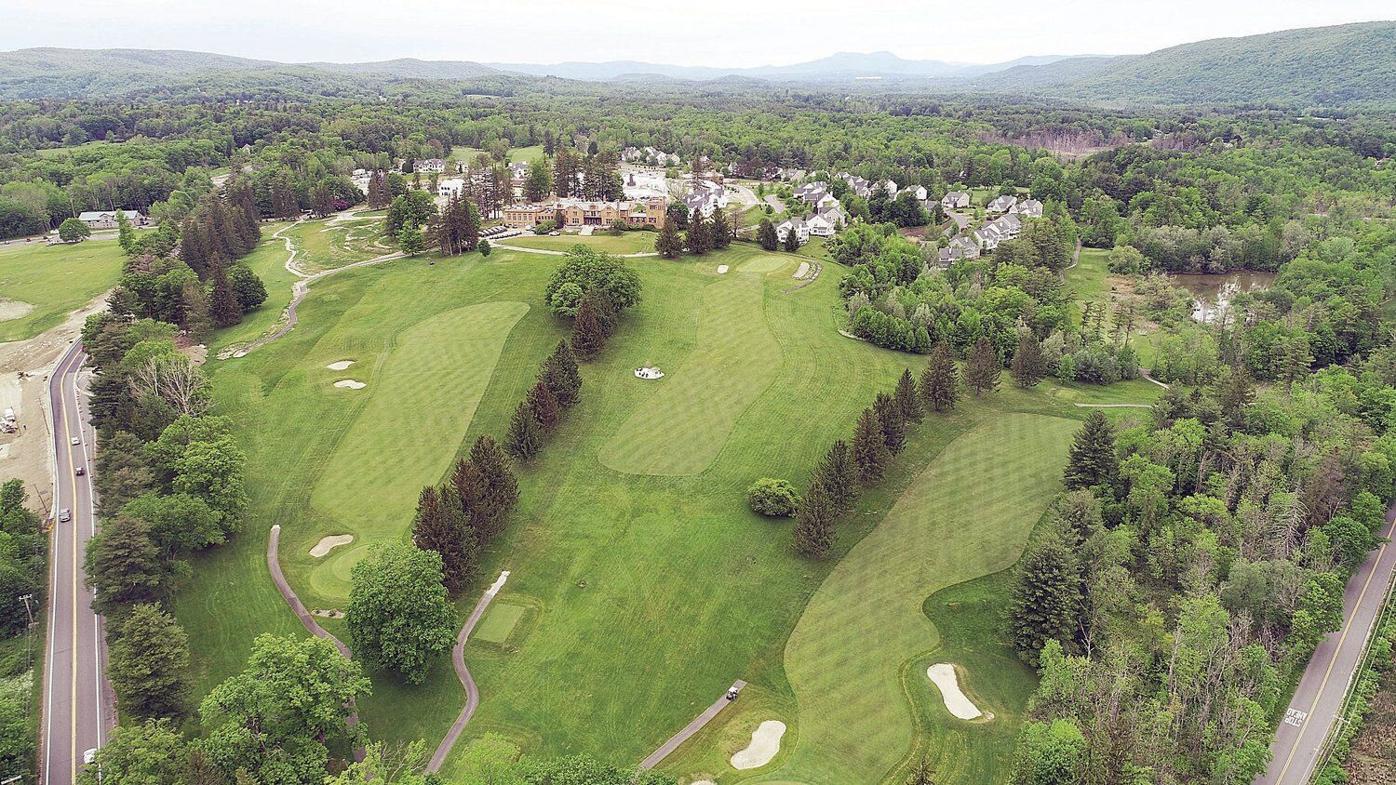 An aerial view of several holes at Miraval Berkshires, as seen on June 2.

"We realistically touched 16 of the 18 holes in some capacity," said Luke Salvatore, Director of Golf at Miraval Berkshires.

With plenty of work being done to the Wyndhurst Manor & Club on the Miraval Berkshires property, it is worth noting that the golf course surrounding the manor has seen significant changes, as well.

The Miraval Berkshires golf course is pictured here on June 2. The course has undergone a significant reconfiguration, matching the work being done at the rest of the Miraval resort, including the Wyndhurst Manor & Club.

An aerial view of several holes at Miraval Berkshires, as seen on June 2.

Anyone driving through Lenox on Route 20 is recent months has been able to see that the Cranwell Spa and Golf Club has been a busy place during its transformation into Miraval Berkshires and the Wyndhurst Manor & Club.

While much of the construction obviously has nothing to do with the property's historic golf course — designed by Wayne Stiles and John Van Kleek in 1926 — that doesn't mean golfers won't notice a difference in their experience.

For now golfers will park near the Wyndhurst Manor — signage will lead you there — until a tunnel is completed under Route 7, likely in late July or early August, that will connect a new pro shop and practice facilities to the new first tee.

"No. 1 is the old No. 8 and the new 18th is what was No. 7, giving golfers great views at both the start and the finish of their rounds," said Director of Golf Luke Salvatore.

The No. 1 tee is in the shadows of the manor itself (which dates back to the 1890s) and provides a gentle start to the round, a downhill par-4 hole with mountains in the distance providing a dramatic and colorful backdrop to start the day.

"It's a perfect opening hole, it's wide open and not long," said Salvatore of the "new" No. 1, which plays shorter than the 364 yards on the scorecard.

The new 18th, on the other hand, plays longer than its 411 yards — it is steeply uphill and slopes left-to-right — to complete a challenging finishing stretch.

"I think the new routing works really, really well," said Salvatore, who is in his fifth year in his current role and 24th year overall at the club. "It gives you some breaks (between tough holes) and finishes with a strong three-hole stretch (the old Nos. 5-7)."

Rare back-to-back par-5 holes finish off the par-37 front side, which features most of the former back-nine holes. It concludes with the former 18th hole, which was transformed from a par 4 into an uphill par-5 with the addition of 80 yards in late 2017.

"The front nine is challenging, it has two of the toughest holes on the course (Nos. 2 and 6) but it finishes with two par 5s, and the 11th hole is another par 5, giving golfers a chance to make up some ground," Salvatore said.

Finishing the front nine on the old 18th and starting the back on the former first hole means that Sloane's, an on-site restaurant located next to the old pro shop, can provide food and drinks at the turn. Previously, No. 9 headed far away from the clubhouse.

"Eventually we will be able to use Sloane's as a halfway house, golfers will be able to call ahead to order food or a cocktail," Salvatore said. Currently, due to the state's rules during COVID-19, the restaurant is not open.

The back nine plays to a par of 34 and includes seven holes from the original front side and two from the old back. While it is the shorter nine, the three-hole finish will get the attention of anyone, starting with a daunting 232-yard (from the tips) par-3, following that with with a tricky 392-yard sharp, dogleg left par 4 and ending on the uphill par-4 18th.

"It's definitely a challenging stretch and what you are seeing from the 18th green when you finish is pretty special," Salvatore said of the panoramic view.

Another major reason for the re-rerouting was to be able to re-locate the pro shop to the site of the club's practice facilities on the west side of Route 20.

Previously, the driving range was hundreds of yards from the pro shop and first tee. Once the tunnel is open under the road the new pro shop, new 8,500-square foot putting and chipping green and improved driving range will all be in one spot with quick access to the first tee.

"Moving across the road gives us control over the range, for clubfitting and lessons," said Salvatore. "It also will make for a very easy check-in for the golfers."

The pro shop will be located in the building already on-site, but it will have a new look.

"We've taken down some walls to open up the space, it looks totally different," said Salvatore. "It will have new counters and fixtures and gives us a couple of more hundred square feet of retail space than we had before."

While the new routing, improved practice facilities and upgraded pro shop are the most obvious changes, a series of other projects have been ongoing for superintendent Tony Moore and his staff over the past few years including:

— Re-edging and replacing sand in every bunker.

— Building or or rebuilding 19 tee structures, focusing on the tips and front tees to improve the quality of play for golfers of all ability levels.

— New grass and artificial tees added for the driving range.

"We realistically touched 16 of the 18 holes in some capacity," Salvatore said of the ambitious agenda that he believes has produced an improved product for visitors and Berkshire residents alike.

"We had to furlough some workers (due to COVID-19 restrictions) and Tony maintained the course himself for five weeks and did a phenomenal job," Salvatore said. "Everyone is back now and we've had to play catch-up, but the course is in great shape."

And it has been a busy place.

"We opened up a week late (May 16th) and it was a little sporadic, but since they started to allow carts we have seen a steady increase in play," Salvatore said. "Our membership is hanging in there. While there may be less members coming up from New York, we have signed up some new members, which is great."

Currently, the course is working under the rules set by Gov. Charlie Baker and his advisory board. Golfers must make their payments over the phone and remain in their car until 15 minutes before their tee time. Once at the course, take the main entrance and follow the signs to parking.

Coming off a fall season that produced four victories in five tournaments, the Williams College women's golf team looked like it would again be a force to reckon with in the NCAA Division III Women's Championship that was set for earlier this month in South Florida.

But, of course, COVID-19 changed all that when the NCAA shut down all sports on March 13, prior to the start of the Ephs' spring season. While coach Tomas Adalsteinsson's team won't get the chance to improve on last year's frustrating runner-up finish to NYU, there was still good news to come out of the crisis-shortened 2019-20 season.

— First, the Ephs' fall dominance — three of the wins were by 30, 23 and 12 shots — resulted in school-record six team members being named to the Women's Golf Coaches Association East Region team (Region 1).

— Next, Adalsteinsson was named the WGCA East Region Coach of the Year for the second time in four years.

— Last, but certainly not least, none of the honored golfers are seniors, so they should all be back in Williamstown in the fall, perhaps even more motivated than ever to join the 2015 Ephs as women's Division III national champions.

Having a school-record six members honored suggests the coach had plenty of options this past fall and will have so going forward.

"I doubt that any golf team in any division has had more than five players on an All-Region team," said Adalsteinsson. "The depth of our roster and how frequently we change our travel roster and lineup, has allowed this to happen. Changing the lineup that often did not cut down on our success in tournaments as we won four out of five tournaments this fall, including the NESCAC Fall Qualifier."

One look at the scoring averages can see why, with the six golfers falling between a 77.13 and 79.4. Freshman Catalin Trurralde had the lowest average and didn't record a score over 80. The rest of the All-Region honorees are freshman Malini Rudra (78.38), sophomores Joanna Kim (77.5) and Olivia White (78.1), and juniors Stella Woo (79.1) and Holly Davenport (79.4).

While Adalsteinsson said he was "honored" to win the award for a second time he added that, "all the credit goes to the team and their performance this fall."

Despite this season's sudden and disappointing ending, Adalsteinsson is taking away the positives and applying them to what could come next.

"We doubled our number of (all-time) sub-600 tournaments at the Ann S. Betchelder and Mt. Holyoke Invitationals and we saw four players shoot rounds at par or better," Adalsteinsson said. "This team continues to raise the bar and break records and I know that they are motivated to do even better next year. I couldn't be more proud of their effort on the golf course and in the classroom.

"The future is bright."

The 37th Paul Dowd Jimmy Fund Classic, originally scheduled for June 10th at Berkshire Hills Country Club, has been rescheduled for July 29th with the hopes that restrictions for COVID-19 will have eased up enough by that time to hold the tournament.

The tournament, which has raised more than $600,000 for the Dana-Farber Cancer Institute and the Jimmy Fund over the years, features a scramble format and will offer shotgun starts at 7:45 a.m. and 1 p.m.

The entry fee is $150 per player and $600 per team. The entry fee includes breakfast for the morning flight, lunch for both flights, a commemorative gift along with awards and dinner.

There are also sponsorship opportunities available ranging from Bronze ($150) to the Double Shamrock ($5,000-plus).

The deadline for foursomes and sponsors to respond is July 15th. For more information, call Bob Tucker at 413 499-1099.