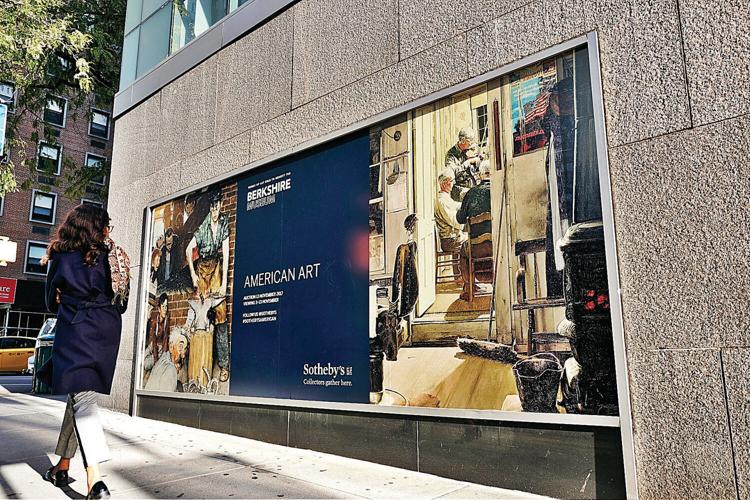 Norman Rockwell's "Shaftsbury Blacksmith Shop" and "Shuffleton's Barbershop" are featured on advertisements for a Nov. 13 auction at Sotheby's in New York City. 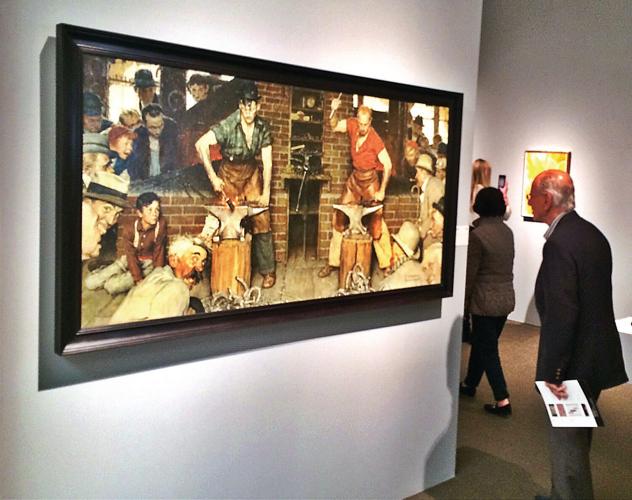 A visitor at Sotheby’s looks at Norman Rockwell’s “Shaftsbury Blacksmith Shop,” one of two works by the artist headed for a Nov. 13 auction. 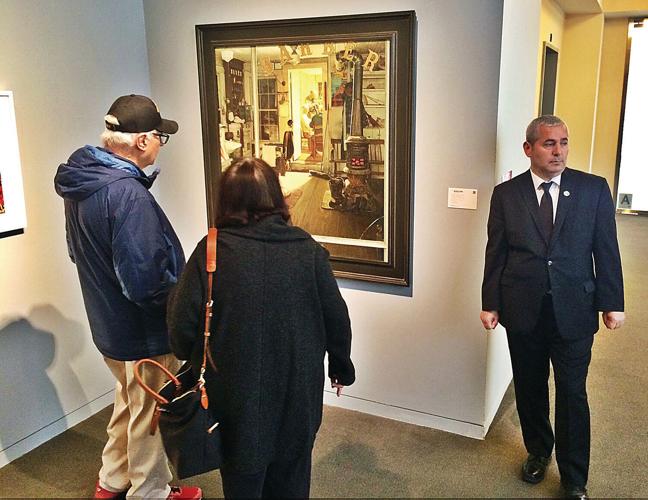 Norman Rockwell's "Shaftsbury Blacksmith Shop" and "Shuffleton's Barbershop" are featured on advertisements for a Nov. 13 auction at Sotheby's in New York City.

A visitor at Sotheby’s looks at Norman Rockwell’s “Shaftsbury Blacksmith Shop,” one of two works by the artist headed for a Nov. 13 auction.

NEW YORK — To see a Norman Rockwell painting up close, art experts have long said, is to appreciate the artist anew.

And so people came in numbers Saturday for what might be the final public viewing of two of the artist's most acclaimed paintings, in an exhibit on the 10th floor of Sotheby's massive York Avenue headquarters, a full north-south block, as the art market enters one of its most important months of the year.

Unless a judge grants motions seeking to halt the sale, "Shuffleton's Barbershop" and "Shaftsbury Blacksmith Shop" will go to auction Nov. 13. Their owner, the Berkshire Museum, seeks to use proceeds to expand its endowment and to tip its focus to science and nature.

The first Rockwell painting comes up fast as people get off an elevator.

Works by some of the world's most acclaimed artists lie ahead, past a reception desk and one soldier in a small army of guards. While many, if not most, visitors Saturday headed straight for works further in by artists as diverse as Francis Bacon, Paul Cezanne and Andy Warhol, others pulled up short at "Shuffleton's."

They leaned in, as Mark Rubin did, to peer and point.

Rubin walked seven blocks from his apartment on 79th Street because he loves art.

And he admires Rockwell.

"He's not taking shortcuts," Rubin said, eyeing the painting. "This is everything he saw. Including the crack in the windowpane. He's determined to do the whole thing, and his gift for choosing his subjects is here."

Since the exhibit opened Friday, the Rockwell paintings have been garnering attention, a Sotheby's employee said, as people are drawn in by the artist's storytelling skills. The works are on view until Nov. 13, the date of the auction.

Rockwell's work has proven audience appeal. When a traveling show of his work was assembled nearly two decades ago by the Norman Rockwell Museum and the High Museum of Art in Atlanta, it was seen by more than 1 million people even before it reached New York City.

At the Guggenheim Museum, its last stop in late 2001, it attracted the museum's largest audience to date, according to the National Endowment for the Humanities.

That was roughly the time when Rockwell's reputation overcame some critics' earlier dismissals and he was accepted to be more than a fine illustrator.

The auction house can put a number on that esteem — and it has. The house estimates "Shuffleton's" will draw bids in the $20 million to $30 million range. The artist's painting "Saying Grace" sold at auction at Sotheby's in 2013 for $46 million.

A little after noon Saturday, a man and his elderly father-in-law emerged from the 10th-floor elevator and made straight for the Rockwell works.

The younger man guided the elder, seated in a wheelchair, toward "Shuffleton's Barbershop," positioning him for a close look. They declined to give their names, but agreed to explain why they'd come.

"I'm thrilled that they haven't been withdrawn through all this legal procedure," the younger man said. "Because I just wanted to see them. It could be the last time the public sees them. They have some gems."

His father-in-law said he knows Peter Rockwell, one of the artist's sons — and a plaintiff in the Berkshire Superior Court lawsuit seeking to stop the auction.

"Good luck with the judge," the elder man said, referring to the ongoing litigation in Pittsfield. He called himself "an admirer" of Rockwell's work, and said the paintings he'd come specifically to see should remain where they've been since the artist gave them to the museum in 1958 and 1966.

"They didn't give this to the museum for the museum to sell it," he said. "It's not right. It's a meaningful contribution."

After studying "Shuffleton's," the two men rolled down a corridor and around a divider to where "Shaftsbury Blacksmith Shop" hung near a drawing by Henry Moore, "Three Seated Women," also owned by the museum and headed for auction. Then they came back to "Shuffleton's" to examine the painting up close again.

Seeing Rockwell in the flesh, so to speak, has a proven power.

In the late 1990s, after viewing Rockwell's work at the Norman Rockwell Museum in Stockbridge, an influential critic with ArtForum said he became "an instant convert."

When Manhattanite Joanne Scheit stood before "Shuffleton's" on Saturday, she was taken by its ability to transport her through time.

"It has a sepia look of a photograph, so we know we're in olden times," she said. "And it's so full of Americana objects that we relate to, like the wood-burning stove. My son in Vermont has the same one."

Scheit is happy that Rockwell is now appreciated as a masterful painter, rather than a commercial artist who conjured covers for the Saturday Evening Post.

"He was considered a schlock artist. Boy, things changed," she said.

Scheit said her interest in Rockwell was enhanced when she heard Laurie Norton Moffatt, the head of the Stockbridge museum, speak at Connecticut College. Both women are alums of the college.

"She brought him to life. It was like lighting a fire," Scheit said of her interest.

Rubin, who joined Scheit for the visit, said people for too long underestimated Rockwell.

"Some people didn't give him the credit he deserved. For us, it's always a joy to see his work," Rubin said.

Norton Moffatt, contacted by The Eagle last week, said people are often "astonished" by the scale of the two paintings now headed for auction.

As director and CEO of the Stockbridge museum, Norton Moffatt has spent many hours doing what people are now doing at Sotheby's — standing face to face with the works.

"They each tell a magnificent story about community," she said in an email. "Their depth, details and layers of complexity are continuously unveiled the longer one gazes upon them. Both of these paintings draw the viewer into the scene, each in a completely different way."

She offered her sense of the impact each painting has on a viewer.

"In 'Shuffleton's' you are an outsider, looking inward, desiring to be within the warmly illuminated camaraderie of friendship after a day's work," she said.

The painting reveals the darkened interior of a Vermont barbershop.

"It takes a long time to arrive at the action in the back room, as you are invited to look closely at the painstakingly painted detail in the barbershop interior," Norton Moffatt said. "Though transparent and invisible, you remain vaguely aware you can't enter the shop through the window, and are thus forever shut out of the interior scene, yet drawn in to it, lonely with longing. It is a meditation."

In the other work,"Shaftsbury Blacksmith Shop," it's all about action. Two smithies battle it out in a race to create horseshoes, as piles of them accumulate before their anvils.

"You are immediately thrust into the action, plunging right into the animated crowd, feeling the heat and fevered energy of the forge and the cheering spectators," she said. "The strength of the blacksmiths, their fierce concentration, raw muscular energy, pulses. That the same artist could paint two such differently powerful works about community: one of serene harmony and stillness and one teeming with competition and raw emotion is a marvel, and one of Rockwell's hallmarks," Norton Moffatt said.

"They are masterpieces, each, in their completely individual way. They reveal Rockwell's deep affection for his community, his neighbors and friends, and his unerring ability to see deeply and celebrate the commonplaces around us, painted lovingly and masterfully."