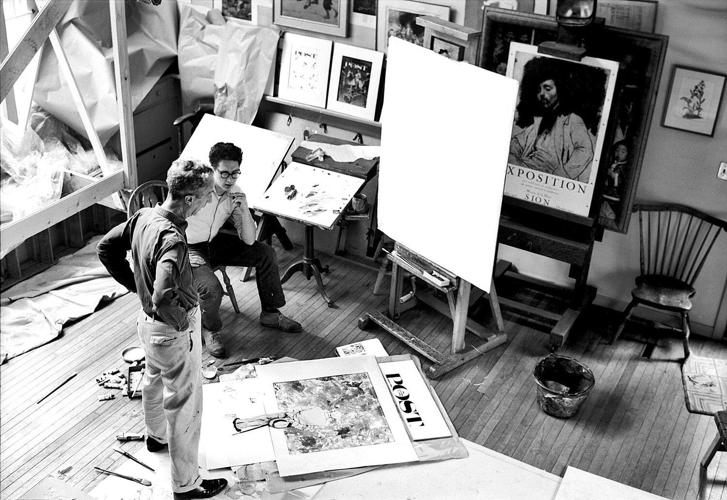 Norman Rockwell, left, and son, Peter, work on "The Connoisseur" in the artist's studio on South Street in Stockbridge in 1961. Peter Rockwell died Thursday at age 83. 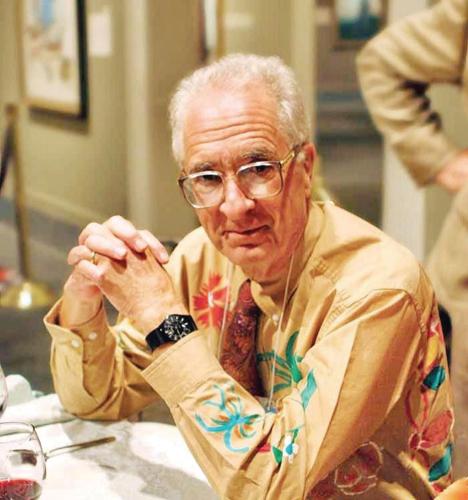 Peter Barstow Rockwell sports a shirt that was painted by his son, John, during Rockwell's 70th birthday celebration in 2006. He was wearing that shirt when he died Thursday, according to a statement by the Norman Rockwell Museum.

Norman Rockwell, left, and son, Peter, work on "The Connoisseur" in the artist's studio on South Street in Stockbridge in 1961. Peter Rockwell died Thursday at age 83.

Peter Barstow Rockwell sports a shirt that was painted by his son, John, during Rockwell's 70th birthday celebration in 2006. He was wearing that shirt when he died Thursday, according to a statement by the Norman Rockwell Museum.

STOCKBRIDGE — Sculptor Peter Barstow Rockwell, the youngest son of iconic artist Norman Rockwell, died Thursday at a hospice in Danvers, a suburb of Boston, spending his last weeks visited by children and grandchildren. He was 83.

News of his death was shared by the Norman Rockwell Museum, which reported that, at his death, he was wearing his favorite shirt, painted by his son, John, with his whimsical clay monsters and sketchbook by his side.

"We will miss Peter and his ebullient creative force," said Laurie Norton Moffatt, CEO and director of the museum. "We are grateful for his lifelong involvement with the museum."

The family plans a memorial gathering in May at St. Paul's Within the Walls Church in Rome, where his work is displayed.

Other sites housing his sculptures include the Rockwell Museum, the National Cathedral in Washington, D.C., his alma mater, Haverford (Pa.) College, a convent in Chioggia, Italy, and the Women's Memorial Bell Tower at the Cathedral of the Pines, an open-air installation in Rindge, N.H., built as a memorial to American war dead.

Peter Rockwell is known for his playful monsters, soaring acrobats, climbing sculptures, humorous terra cottas, bronze work and his deeply spiritual religious iconography, according to the statement released by the museum.

Peter Rockwell, born Sept. 16, 1936, in New Rochelle, N.Y., the third son of Norman and Mary Barstow Rockwell, was 3 when the family moved to Arlington, Vt., where his father painted his portrayals of New England small-town life in a quieter setting.

According to the biographical obituary prepared by his family, Peter attended a one-room school in Arlington where, according to him, many of the older boys had to be disarmed of their hunting knives every morning and his neighbor shot turkeys from the front porch. Peter described it as one of the happiest times of his life.

The family moved to Stockbridge in 1953 so that his mother could be close to the Austen Riggs Center, the open psychiatric facility where Mary, who suffered mental health and addiction problems, could check herself in.

While confronting his own mental health issues, Peter later reflected on childhood moments when he had to care for his mother, according to the family's obituary.

He also talked about the challenges of being an artist son of a famous painter. While his art always was full of joy, he would talk about how, in life, he also suffered from anxieties and occasional "dark thoughts," the obituary stated.

Peter Rockwell attended the Putney (Vt.) School, where he met his future wife, Cynthia (Cinny) Ide, in 11th grade. They were married in 1958 at the chapel at Connecticut College in New London, Conn. She died in 2013.

Following in his father's footsteps to establish his career as an artist, author and academic, Peter studied art and sculpted at Haverford. While there, he was severely injured in a fencing accident, requiring months of recuperation.

When he returned to college, as an alternative to fencing, he decided to try sculpture, studying with J. Wallace Kelly.

After graduating from Haverford with an English degree, he enrolled in the Pennsylvania Academy of Fine Arts to study sculpture full time.

During his college years, Peter and his brother, author Thomas Rockwell, opened Rockwell Brothers: Books and Prints, a store in Stockbridge.

In order to study the techniques and materials of Italian Renaissance sculptors, Peter and his wife relocated to Italy after college, crossing the Atlantic Ocean on a freighter with their 18-month old son, Geoffrey. They established the family residence in Rome, where they raised Geoffrey and their other three children, Thomas and twins John and Mary.

Peter worked in a studio space near their home on Villa Pamphili so he could walk to work, stop at his favorite cafe for an espresso and converse with the proprietors in fluent Italian.

Cinny Rockwell, who translated art history abstracts for the International Art History Research Institute for many years, also served on the board of the Norman Rockwell Museum, joined by their son, Thomas.

"She and Peter were enthusiastic about the evolution of the museum's mission to place Norman Rockwell in the context of American illustration art and were great champions of the museum's work," according to the statement.

After his wife's death, Peter returned to the U.S. to be closer to family members. He settled in Beverly and continued his work in the Boston suburb.

In August 2017, Peter was among six Rockwell relatives opposing the Berkshire Museum's planned sale of Norman Rockwell's "Shuffleton's Barbershop" and "Shaftsbury Blacksmith Shop," among 38 other works from the Pittsfield museum's permanent collection.

In a letter to The Eagle, the family members called on the museum to keep "Shuffleton's Barbershop" in its collection to prevent the possibility of it being sold to a private collector and falling out of public view. The letter was signed by Norman Rockwell's three sons, Peter, Thomas and Jarvis.

"Norman Rockwell didn't give ["Shuffleton's Barbershop"] to finance the Museum's renovation plans," they wrote. "He gave it hoping the people of the Berkshires would see it and enjoy it."

Rockwell had donated both paintings to the Berkshire Museum, "Shuffleton's" in 1959 and "Shaftsbury" in 1966.

"Shuffleton's" was sold to the Lucas Museum of Narrative Art and was loaned back to the Norman Rockwell Museum for display last summer. It remains on long-term loan there until further notice while filmmaker and entrepreneur George Lucas' museum remains under construction in Los Angeles. The whereabouts of "Shaftsbury" is unknown.

Peter Rockwell made "immeasurable contributions to Norman Rockwell Museum, including scholarship, programs, and his sculptures on the grounds and in the permanent collection," Norton Moffatt noted. He also wrote "Some Comments from the Boy in a Dining Car," an essay for the museum's first major traveling exhibition of his father's work, "Pictures for the American People."

Peter Rockwell was a strong advocate for his father's art as intended for a worldwide audience, not only Americans. He pointed out that the famed illustrations were even encountered behind courtyard walls in Pakistan, where Peter researched his own book on the unfinished monuments of India.

His resonant, reassuring voice can be heard as narrator of the orientation video for visitors to the Norman Rockwell Museum. Peter appeared frequently on the lecture circuit in the U.S. and abroad, speaking about his father's work.

Many videos and interviews with Peter are available on the museum's YouTube channel.

The largest assemblages of Peter's sculpture is in the permanent collection of the Norman Rockwell Museum, including his climbing acrobats, a massive stone carving named Grendel, and a cherished collection of sculptures he had given to his father. His works are found on the museum grounds, in front of his father's studio and along the walking paths.

In 2009, curated by Stephanie Plunkett, a comprehensive exhibition of the artist's work and career, "The Fantastical Faces of Peter Rockwell: A Sculptor's Retrospective," was organized by the Norman Rockwell Museum. After its initial installation in Stockbridge, it traveled to the Butler Museum in Youngstown, Ohio.

In 2014, the Norman Rockwell Museum brought its major Norman Rockwell exhibition, "American Chronicles," to the Fondazione Roma-Arte-Musei at the Palazzo Cipolla in Rome. There, Peter greeted museum trustees, patrons, staff and officials, providing tours with local insight for many of the travelers.

Last summer, he offered visitors to the Norman Rockwell Museum a tour of his sculptures on the grounds.

As an expert on sculpting techniques, Peter is the author of several rare books on stone carving in Italy and India, including "The Art of Stoneworking," "The Unfinished: Stone Carvers at Work on the Indian Subcontinent" and "The Compleat Marble Sleuth."

His survivors include brothers Jarvis and Thomas, his four children and his grandchildren Peter, Alethea, Mateo and Alaska.