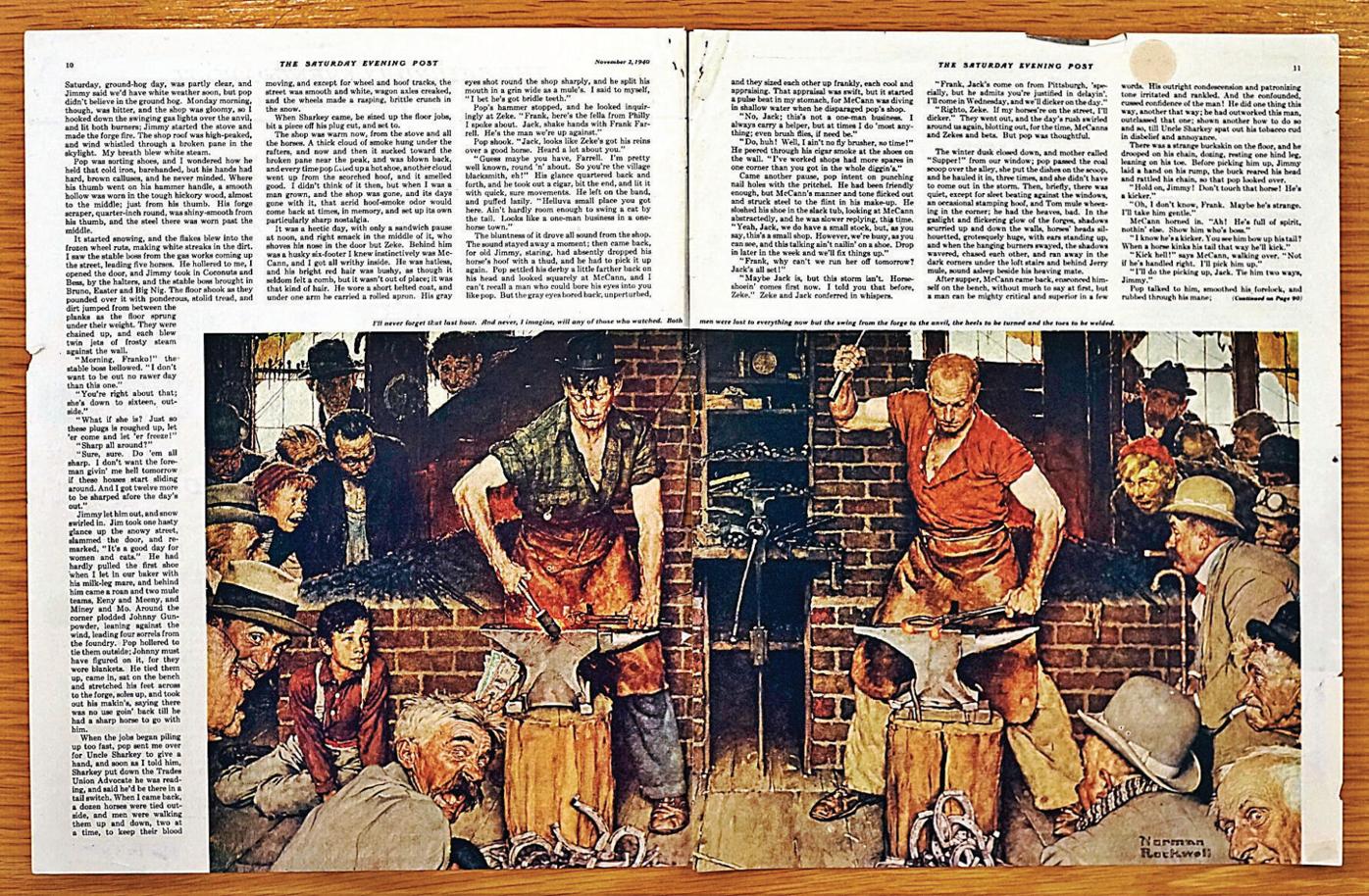 "The Shaftsbury Blacksmith Shop" was painted by Norman Rockwell for the Nov. 2, 1940 issue of the Saturday Evening Post to illustrate a story. This tear sheat is part of the collection of the Norman Rockwell Museum in Stockbridge. 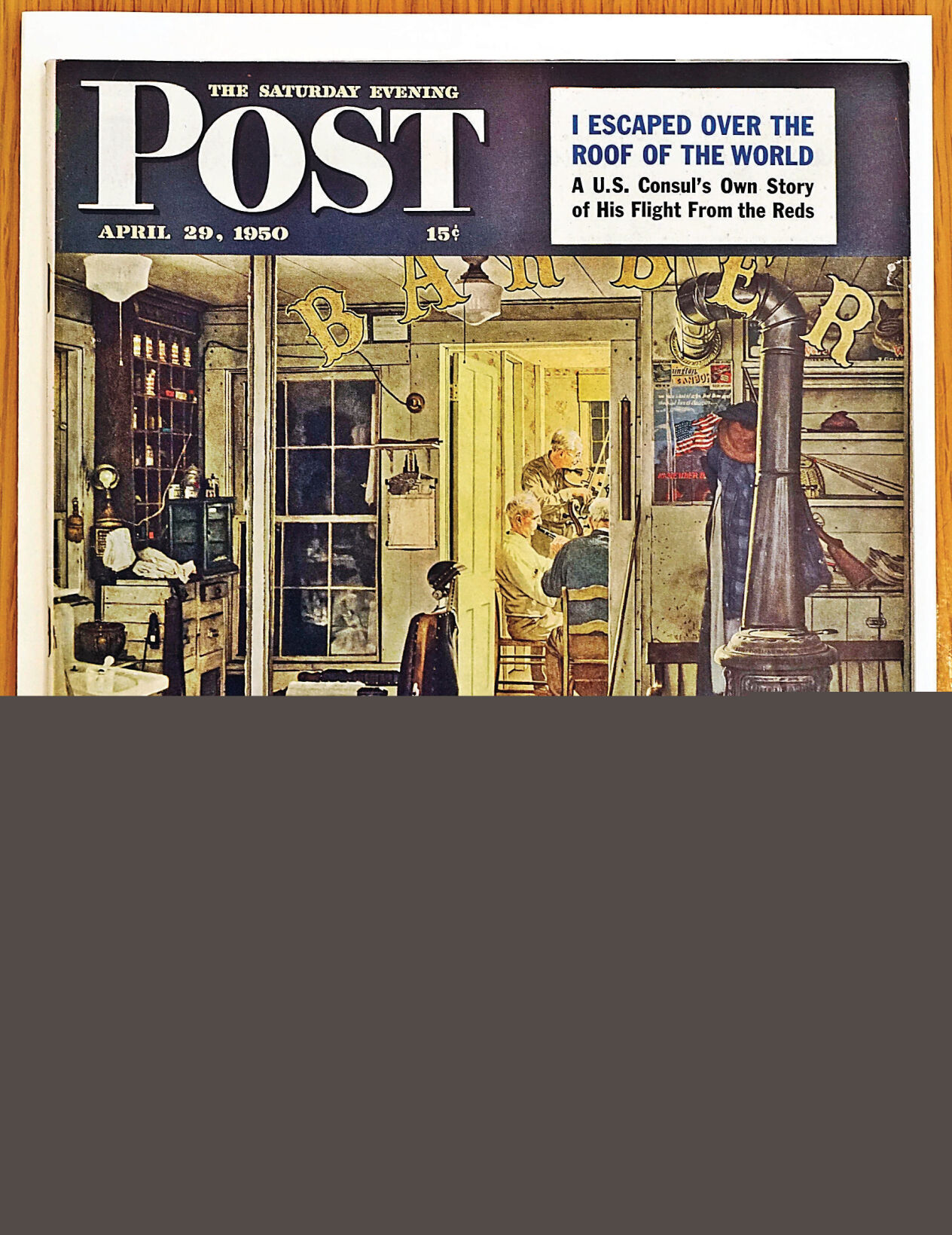 The Saturday Evening Post cover for April 29, 1950 was the painting "Shuffleton's Barbershop," photographed from the collection of the Norman Rockwell Museum.

"The Shaftsbury Blacksmith Shop" was painted by Norman Rockwell for the Nov. 2, 1940 issue of the Saturday Evening Post to illustrate a story. This tear sheat is part of the collection of the Norman Rockwell Museum in Stockbridge.

The Saturday Evening Post cover for April 29, 1950 was the painting "Shuffleton's Barbershop," photographed from the collection of the Norman Rockwell Museum.

PITTSFIELD — At least six relatives of Norman Rockwell have come out against the Berkshire Museum's planned sale of the artist's work.

In a letter to The Eagle, the family members called on the museum to keep "Shuffleton's Barbershop" in its collection to prevent the possibility of it being sold to a private collector and falling out of public view.

The museum last month announced a plan to sell 40 works from its permanent collection — including Rockwell's "Shuffleton's Barbershop" and "Shaftsbury Blacksmith Shop" — to bolster its endowment and help pay for a planned renovation.

"Norman Rockwell didn't give ["Shuffleton's Barbershop"] to finance the Museum's renovation plans," they wrote. "He gave it hoping the people of the Berkshires would see it and enjoy it."

Rockwell donated both paintings to the Berkshire Museum, "Shuffleton's" in 1959 and "Shaftsbury" in 1966.

While the letter singled out "Shuffleton's," the family is also opposed to the sale of "Shaftsbury," said Margaret Rockwell, manager of the Norman Rockwell Family Agency.

She said the letter called attention to "Shuffleton's" because it is a family favorite and considered a Rockwell "masterpiece."

She added the family spoke out in hopes museum leadership would decide to keep "Shuffleton's" in its collection, but "ideally, we would like both saved."

The Rockwells are the latest among a growing number of people who raised concerns about the museum's planned auction.

Still, the museum leaders held firm to their decision.

"We certainly respect the position and passion of those Rockwell family members, and anyone who opposes the sale, for that matter," Elizabeth "Buzz" McGraw, president of the museum's board of trustees, said in an emailed response. "However, in light of the rigorous two-year process we've undertaken, and in keeping with our fiduciary responsibility, the board and the museum will move ahead as planned in order to ensure the success and longevity of the museum and its increasingly integral role in the community."

Museum leadership has said a $60 million plan will help the 114-year-old museum better serve 21st century audiences and stabilize its finances. Sale proceeds from the auction, expected to yield at least $50 million, will mean a $40 million boost for Berkshire Museum's endowment and provide $10 million for a renovation. Another $10 million would come from a fundraising campaign.

Opponents of the museum's plans have said the 40 artworks are integral to the history of the Berkshire Museum and the region, and therefore should remain in the collection.

Many of the works, primarily paintings by American and European artists from the 18th, 19th, and 20th centuries, were part of the collection when Zenas Crane founded the venue in 1903.

The Rockwell paintings came into the collection more recently. They likely were given as a thank-you from the artist to the museum, according to Stephanie Plunkett, Norman Rockwell Museum deputy director and chief curator.

Rockwell created "Blacksmith" in 1940, and "Shuffleton's," in 1950. Both works, while fictionalized, were based on slices of the life he experienced in Arlington, Vt., where he and his family lived for 13 years prior to his move to Stockbridge.

Both works were created for The Saturday Evening Post; "Blacksmith" accompanied a fictional story, and "Shuffleton's" was stand-alone cover art.

Among the numerous paintings created by his father over the course of his 60 year career, "Shuffleton's" is perhaps Peter Rockwell's favorite. During a telephone interview from his home in Italy, Peter recalled memories of haircuts at Shuffleton's Barbershop as a child.

But the fact that it is a family favorite is of lesser significance to the artist's youngest son.

"I think it would be a great pity for it to go into a private collection where the public could not see it," said Peter Rockwell, 80.

Other community members have expressed similar concerns about the museum's plans, including Laurie Norton Moffatt of the Stockbridge-based Norman Rockwell Museum. Others opposed have said they object to the idea of art being sold for profit.

There also is public support for the museum's plans.

Some people have applauded its leadership's decision to embrace a controversial move aimed at securing the museum's financial future.

And some supporters have welcomed Berkshire Museum's proposed recommitment to science and natural history, saying it will help it stand out among the area's many cultural destinations.

Auctions for the 40 artworks on the list are likely to take place in the fall at Sotheby's, which now has all but two of those artworks in its charge.