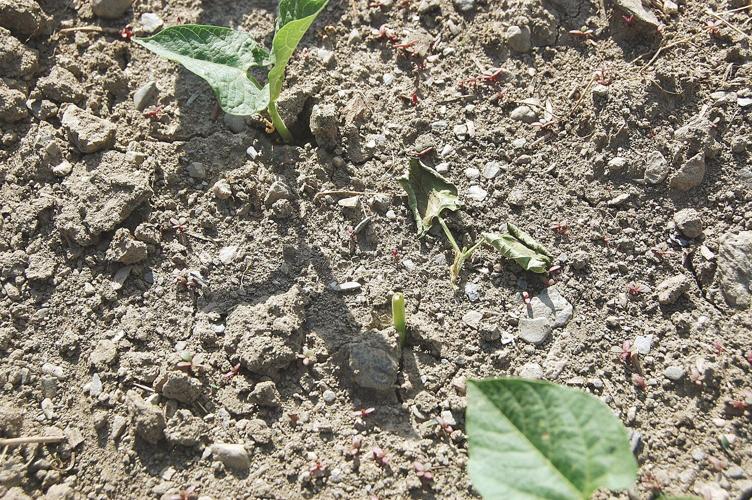 Bean seedling laying on the ground after being attacked by a cutworm. 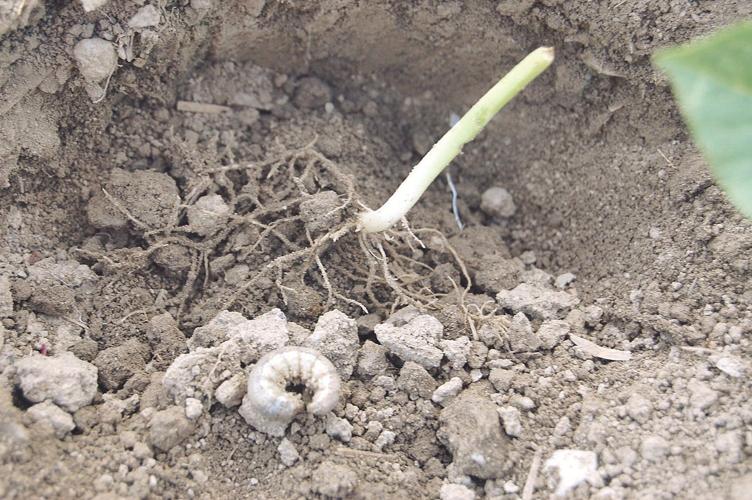 Cutworm was found by digging in the soil around the damaged bean seedling.

Bean seedling laying on the ground after being attacked by a cutworm.

Cutworm was found by digging in the soil around the damaged bean seedling.

Sometimes, I wish insects would practice social distancing; at least the ones who have decided to gather in my vegetable garden and dine on my crops. Currently, the critters that are enjoying the fruits of my labor are asparagus beetles, cabbageworms, striped cucumber beetles, Colorado potato beetles, squash bugs and cutworms. Though I haven't seen them, I suspect that the adult moths of squash vine borer are active and will soon be laying their eggs at the base of the stems of my summer squash.

Since I avoid using pesticides, except for a few natural products, I must rely on different strategies for each pest. In some cases, pest management is done simply by hand picking the offending critters. This is easily accomplished with beetles and some caterpillars. For squash vine borers, covering the plants, including winter squash, melons and pumpkins, with row covers will deter the adult moths from getting to the plants. Just keep in mind that the blossoms on these plants must be pollinated before they'll set fruit. So, the row covers have to be removed when the plants come into flower. That may seem counter-productive, but the adult moths will mostly have completed their short life by then.

Sometimes, my strategies do not work. Just this week, I saw that a few recently emerged bean seedlings were severed and laying on the ground. Clearly, this was the work of cutworms. In theory, maintaining a 3-foot wide strip of weed-free dry soil around the row of beans and eliminating mulches should discourage cutworms, but it didn't. Since this is a long row of bean plants, cutworm collars would be impractical. By digging into the soil immediately around the severed seedlings, I was able to locate the offenders and disposed of them. Fortunately, only four seedlings were destroyed. So, maybe my strategies did work.

WORKING OUT IN THE GARDEN

Here are some strategies for working in the garden this week:

- Apply both sunscreen and insect repellent when working outdoors. Deer ticks and mosquitoes are common and both are found on or around plants. Both are capable of carrying and transmitting serious diseases. Besides applying sunscreen and repellent, wear light-colored clothing, including wearing long-sleeved shirts and long pants.

- Don't wait! Prune spring flowering shrubs that have completed their bloom, i.e. most azaleas and rhododendrons, lilacs, forsythia, fothergilla, flowering quince, beautybush, witch-hazel and mockorange. These plants will produce buds for next spring's blossoms on the new growth this summer. With multi-stemmed shrubs, such as lilacs and forsythia, cut some of the oldest, and often the largest, stems back to ground level. New stems will emerge at the base of the plant. In any case, never remove more than one-third of the stems unless the shrubs are no longer putting out any flowers. In that situation, total rejuvenation is required. That means cutting all the stems back to ground level.

- Pinch back by two-thirds the new shoots on young pines to encourage compact growth.

- While in the pinching mood, pinch a chrysanthemum. Don't worry; it hurts you more than the plants. In fact, pinching the plants will result in a bushier plant with an abundance of bloom later in summer. With many new varieties of chrysanthemum, pinching may only need to be done once, and late June or early July is the best time to do that. With older varieties, pinching is typically done three times: early June, late June, and the last one no later than mid-July.

- Cover blueberry bushes with netting to protect the ripened fruit from becoming a preferred item on the menu for the local bird population.

- Start a second sowing of crops planted earlier in the growing season. These include members of the cabbage family, carrots, beets, turnips and other root crops, as well as beans, summer squash and sweet corn. A few leafy greens that tolerate summer heat are "Jericho" romaine lettuce, Asian greens, such as tat soi, and chard. Other greens may be tried, but be sure they get plenty of water and shade them, if possible.

- Apply a side dressing of fertilizer to long season crops including sweet corn, tomatoes, peppers, melons, winter squash and onion. Side dressing can be accomplished by making a one- or two-inch deep furrow beside crop rows or around individual vegetable plants and placing aged compost, manure or a general purpose garden fertilizer in the furrows. Side dressing may also be accomplished by applying a liquid feed, e.g. fish emulsion, to the plants. This fertilizer application is critical since crops now have well-established root systems to take up nutrients and are growing rapidly.

No space for a garden? If you have a patio, doorstep or windowsill, you have plenty of room for a container garden!

If you have a patio, a doorstep, or just a windowsill, you can have a vegetable garden. The solution is to grow vegetables in containers. All that is needed to get a garden underway are some containers, soil and seeds or transplants.