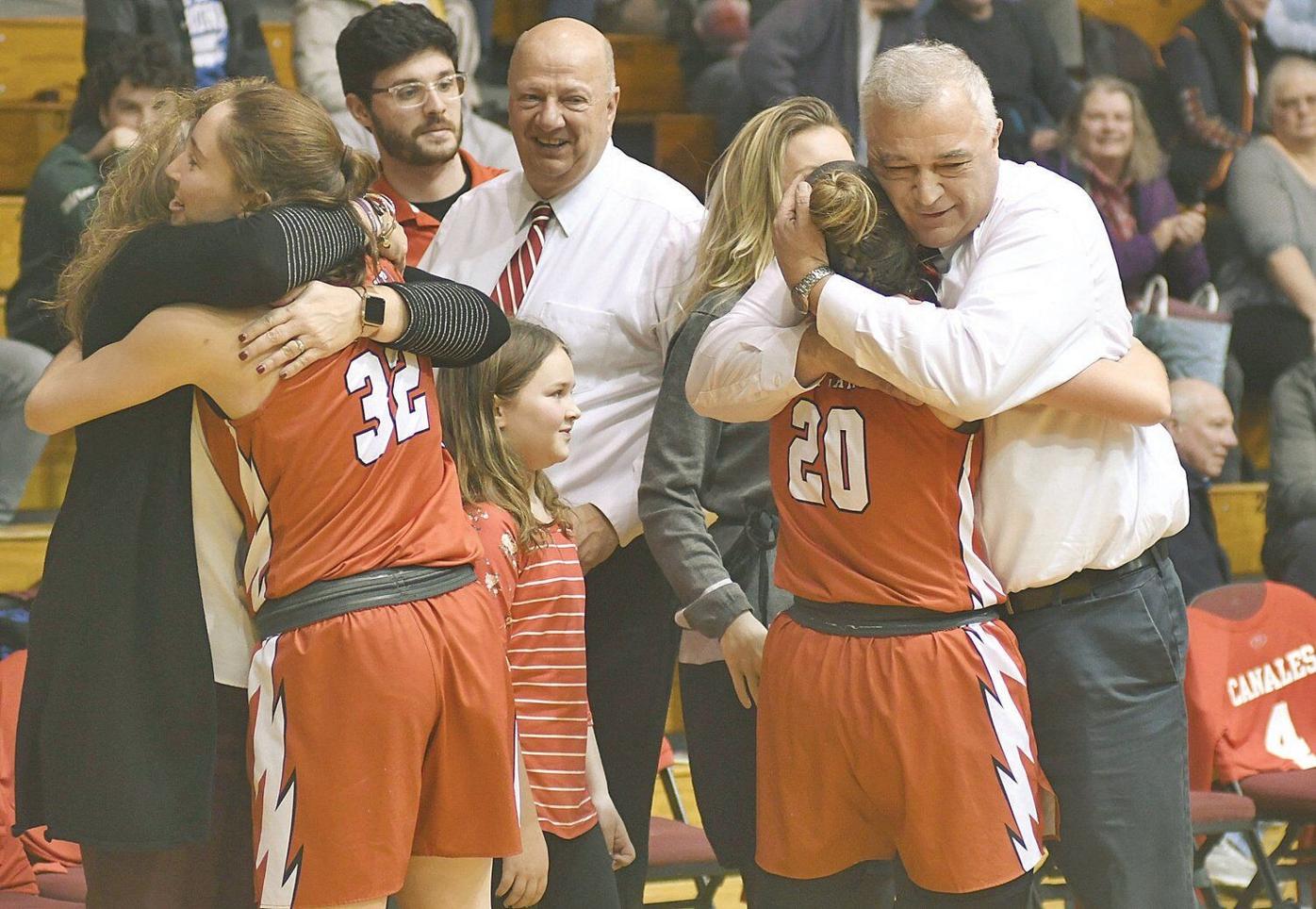 Hoosac's Riley Robinson embraces Coach Ronald Wojcik following a game in 2020. Wojcik's tenure at Hoosac Valley is over. After 10 years at the helm, Wojcik was notified by the school district on Tuesday that he will not be brought back for next season. 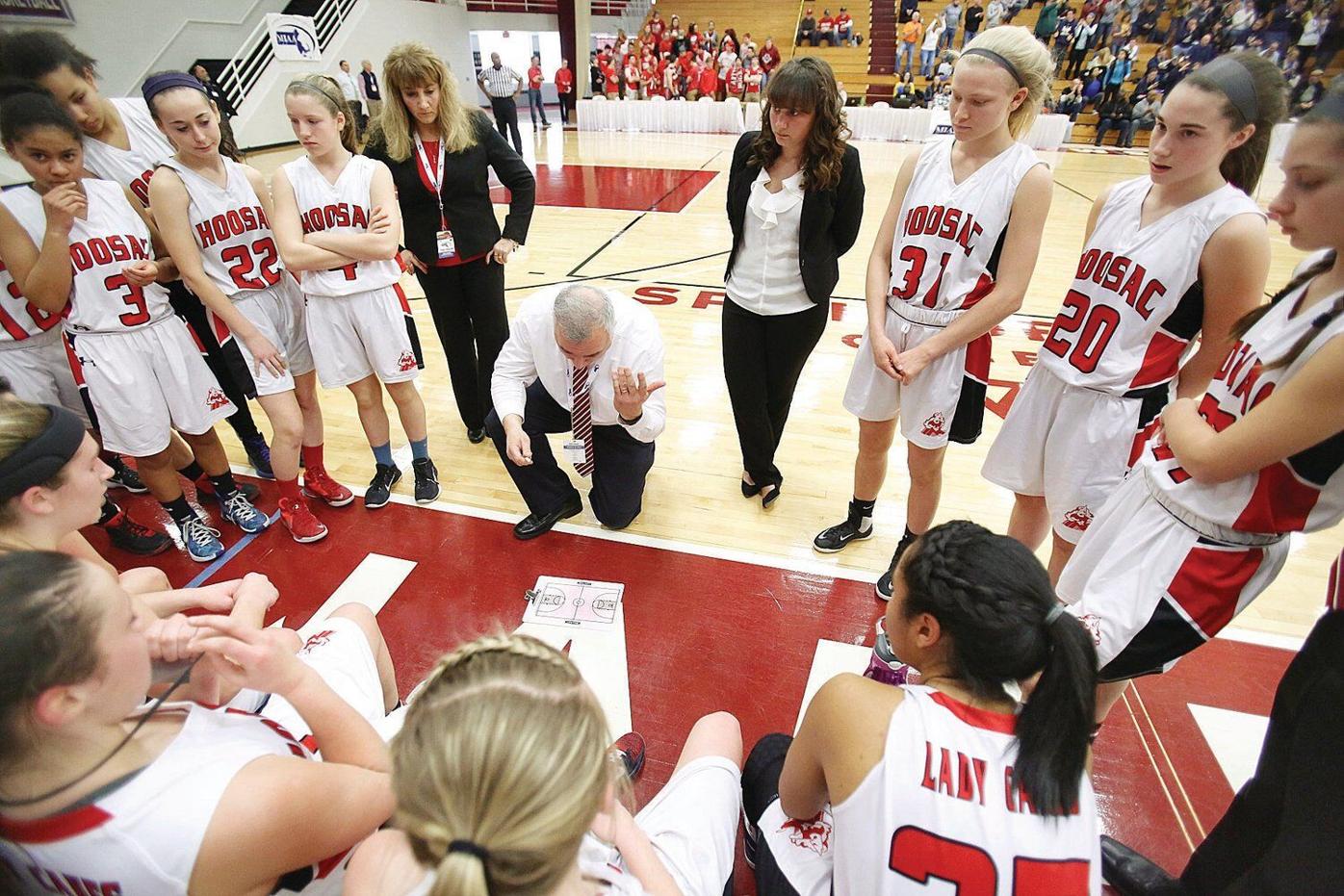 Hoosac Valley coach Ron Wojcik talks to his team during a time-out in the last minutes of their 62-37 loss to Archbishop Williams in the MIAA Division III state championship game in 2017. After 10 seasons as the head coach at Hoosac, Wojcik won't return to the team next season. 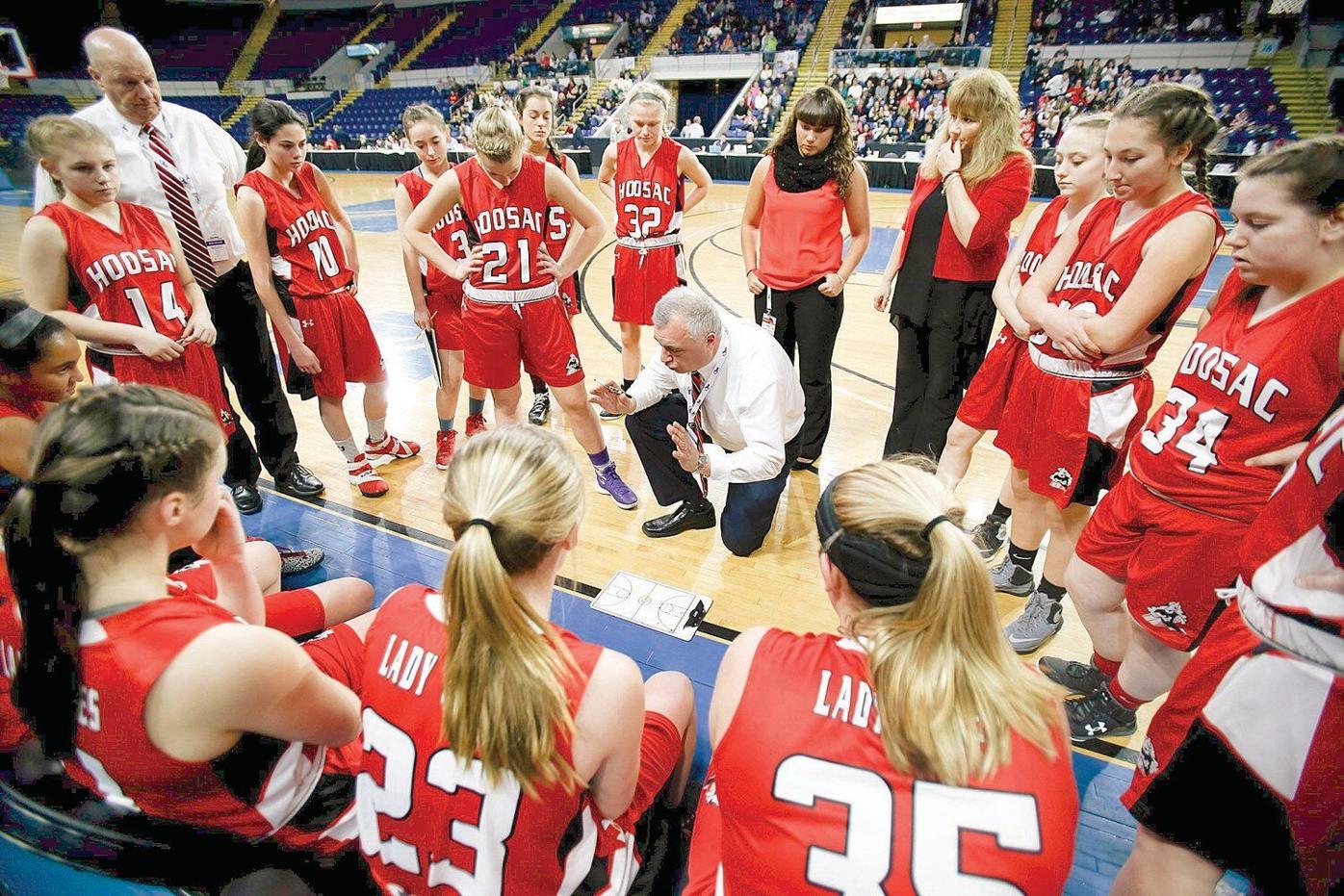 Hoosac Valley coach Ron Wojcik talks to the team in a time-out during Hoosac's 57-48 loss to Bishop Fenwick in the MIAA Division III in 2016. Wojcik's 10-year tenure as the head coach is over, after the school district notified him on Tuesday he would not be brought back next season.

Hoosac's Riley Robinson embraces Coach Ronald Wojcik following a game in 2020. Wojcik's tenure at Hoosac Valley is over. After 10 years at the helm, Wojcik was notified by the school district on Tuesday that he will not be brought back for next season.

Hoosac Valley coach Ron Wojcik talks to his team during a time-out in the last minutes of their 62-37 loss to Archbishop Williams in the MIAA Division III state championship game in 2017. After 10 seasons as the head coach at Hoosac, Wojcik won't return to the team next season.

Hoosac Valley coach Ron Wojcik talks to the team in a time-out during Hoosac's 57-48 loss to Bishop Fenwick in the MIAA Division III in 2016. Wojcik's 10-year tenure as the head coach is over, after the school district notified him on Tuesday he would not be brought back next season.

The fact that Ron Wojcik and his staff won't be coaching girls basketball at Hoosac Valley this coming winter continues to reverberate around Western Massachusetts.

Wojcik was told on Tuesday by Adams-Cheshire Regional School District that he, along with longtime assistants Stephanie Curry and Bob LeClair, will not return for a 11th season.

"I appreciate you reaching out, but we do not comment on personnel decisions," ACRSD Superintendent Aaron Dean wrote to Eagle sports editor Geoff Smith in an email.

An additional email to principal Colleen Byrd was not responded to by press time.

For his part, Wojcik said that he was disappointed in the decision.

"I don't really get overly angry anymore," Wojcik said. "As you get older, you mellow a little bit. I'm more disappointed. I think after everything we've done, myself and as a coaching staff, you like to leave on a better note."

"We had met a couple of weeks ago, and seemed to have, I think been okay and working under the assumption that I would come back," Wojcik said. "[On Tuesday], the superintendent felt that it was a good time to go in another direction."

When asked to be specific in the criticism, the reticent Wojcik said the following:

"I would say typical things that programs have issues with," Wojcik said in a phone interview with the Eagle on Wednesday. "Parents with playing time or kids being unhappy, numbers and not having a JV program last year. I would say typical things that you hear. I never heard tension between me and the administration — I didn't personally feel as if I had tension. I never heard anything really besides that."

Wojcik's Hoosac teams won seven Western Massachusetts titles, won one state title on the court and were named co-champions with St. Mary's for 2020 due to the coronavirus pandemic. In 10 seasons, Hoosac had six 20-win seasons. The Hurricanes were 127-29 in Berkshire County in those 10 years.

The response to what happened was fast and, in many cases, furious.

Wahconah girls basketball coach Liz Kay, whose Warriors have been a Division III rival of Hoosac for her six years, was one of many coaches who were surprised to hear about the change.

Text messages from Hoosac basketball alumni flowed in throughout Wednesday, as word spread.

"These coaches have had our back since Day 1, and I get ever player has their own relationship with them, but deep down they care," McKenzie Robinson wrote, "and if they didn't, they wouldn't be putting their time in and out watching films, coming to practices, scouting and checking in. They made sure, no matter what we did we always went back to the community. They knew the bigger picture.

"I have watched them coach my two older sisters and they have been close to my family since I was a kid," Riley Robinson wrote. "Each of these coaches deserve the utmost respect and have been loyal to the Hoosac girls basketball program."

Former Hurricane Fallon Field checked in on Wednesday afternoon. She said that she believed that community members should have had some say in this decision.

"Coach Ron, Coach Stef, Coach Bob and other assistants that came and went allowed me to be leave Hoosac as a better athlete and a better person," Field wrote.

It wasn't just Wojcik's former players who responded. Andrea Bertini, the head coach at Division III Westfield State, wrote a letter to Superintendent Dean and was critical of the decision. She shared the letter with The Eagle, saying that what Hoosac accomplished on the court was impressive, but only part of the story.

"What I've observed in those years watching him coach and with the reference point of watching COUNTLESS other high school programs across the state, is that he BUILT a program. And for girls that is truly a unique experience across the state," Bertini wrote to the superintendent. "What they have all sacrificed to build, the blood sweat and family they were has been torn down. When the words 'go in another direction' ... what direction is that exactly? You had one of the best high school coaches not just in the state but in the entire region."

Alie Mendel just finished her sophomore season playing for Bertini at Westfield, and the 2018 Berkshire Eagle girls athlete of the year was the first of her former teammates to comment.

"A coaching staff that didn't just teach talent that would win championships, but a coaching staff that educated their players on the true meaning behind why we play high school sports. They taught us that hard work, dedication, and being responsible will take you anywhere in life," Mendel wrote on Facebook. "They voiced that the time and commitment put in, in the off season and at practice pays off."

Even rival programs had glowing words for Wojcik.

"Played them in 3 state finals, they came to the Spartan Classic two times and we traveled this past December to the Hoosac X-Mas tournament," the St. Mary's of Lynn girls basketball Twitter account wrote. "Ron was always first class with us and the sport of basketball will miss Coach Wojcik. WMass may never see another run like this!"

The response to those messages were heartwarming to the former coach.

"When you go into teaching and coaching, you want to hopefully have a positive impact on kids' lives and do the best you can with that," he said. "So when you see some responses back from students and players, knowing you've made a positive impact, their support for you and the coaching staff and their great memories, absolutely. When you coach, everybody wants to win championships, but the relationships are certainly the most rewarding thing."

Between his stint at Pittsfield and this time at Hoosac, Wojcik has been a head basketball coach for nearly a quarter of a century. When he left Pittsfield, it was voluntary and to see his stepson play high school basketball. After Tuesday's decision, Wojcik said that while there's no guarantee he'll coach again, he is certainly open to revisiting that in a year or two.

"I've been asked" about assisting at a college, he said. "It's intriguing. Being a high school coach again, I don't know. At this point in my career, to me, you go back into it and you should be committed for a long period of time if you can and, to take that on now, I don't know if I'm at that point in my career."

But the veteran coach said that he isn't necessarily going to start fishing and teaching. Coaching could still be in his future.

"I would never close any doors, but I'll take some time away and see what happens," Wojcik said. "I don't foresee a lot happening in the future with sports for the next year or so, just based on the COVID situation. I think I'll have some time to be away. I was getting to the end of your career anyway, and thinking about retirement in general. So we'll see.

"But I would never say never."