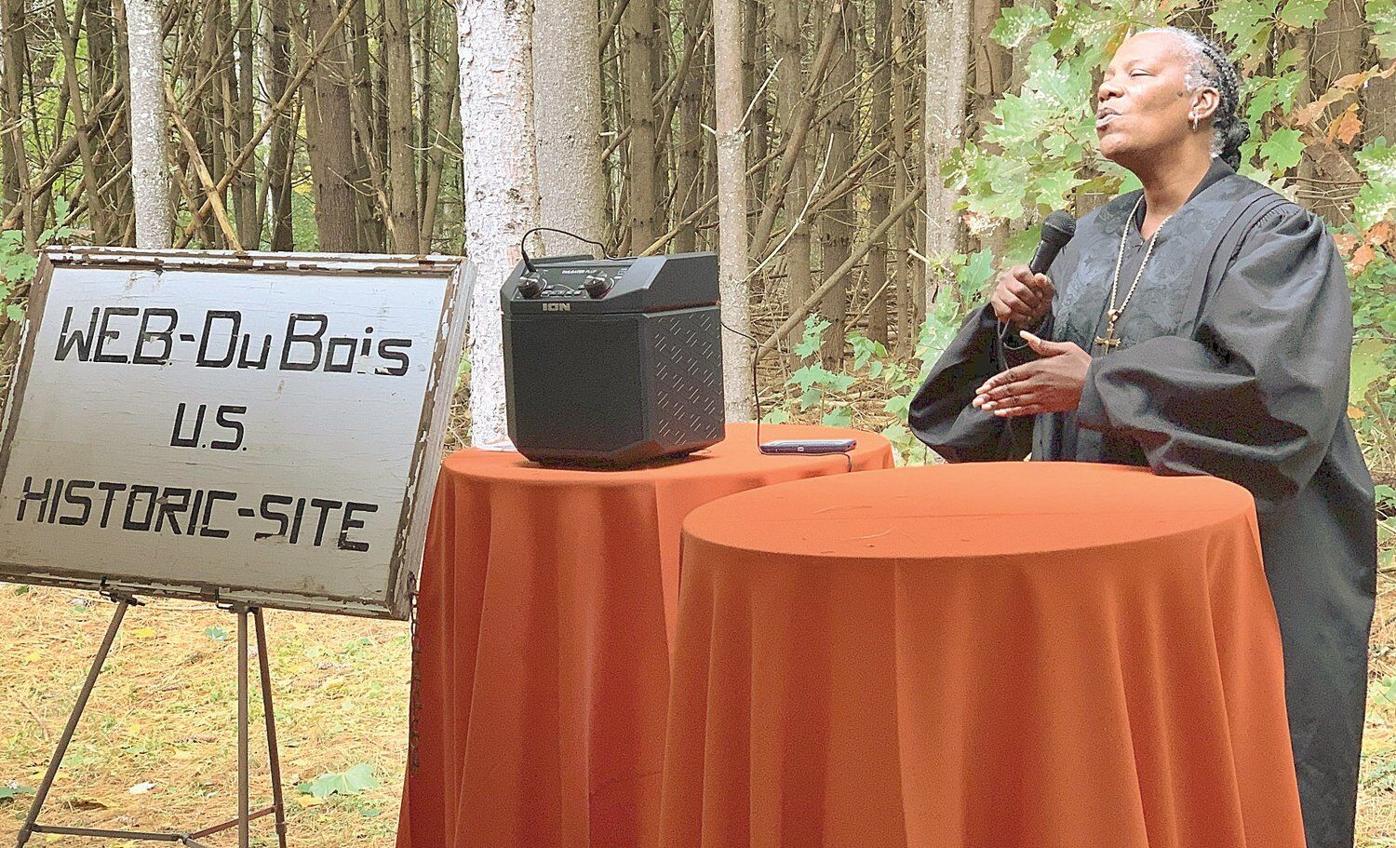 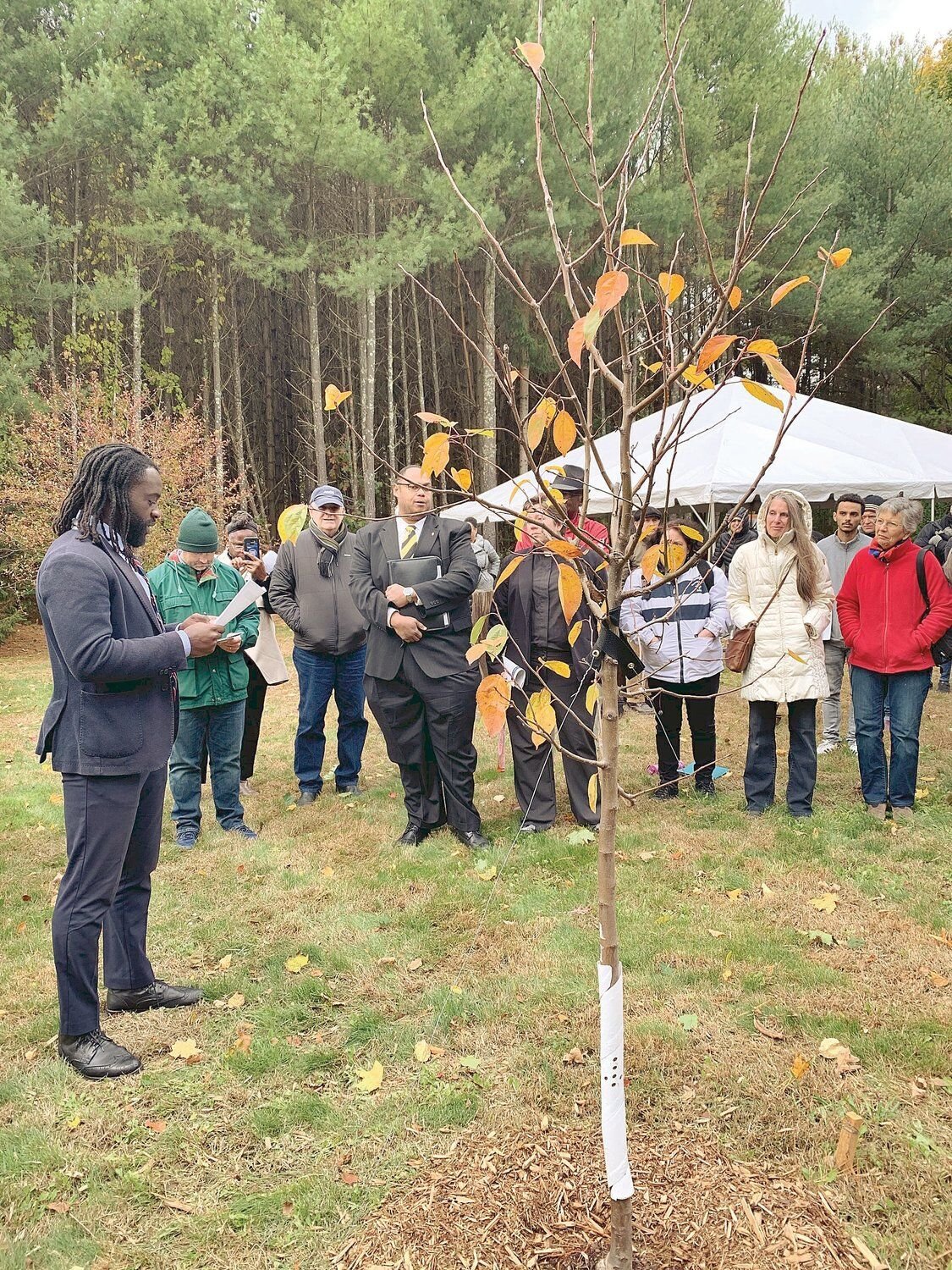 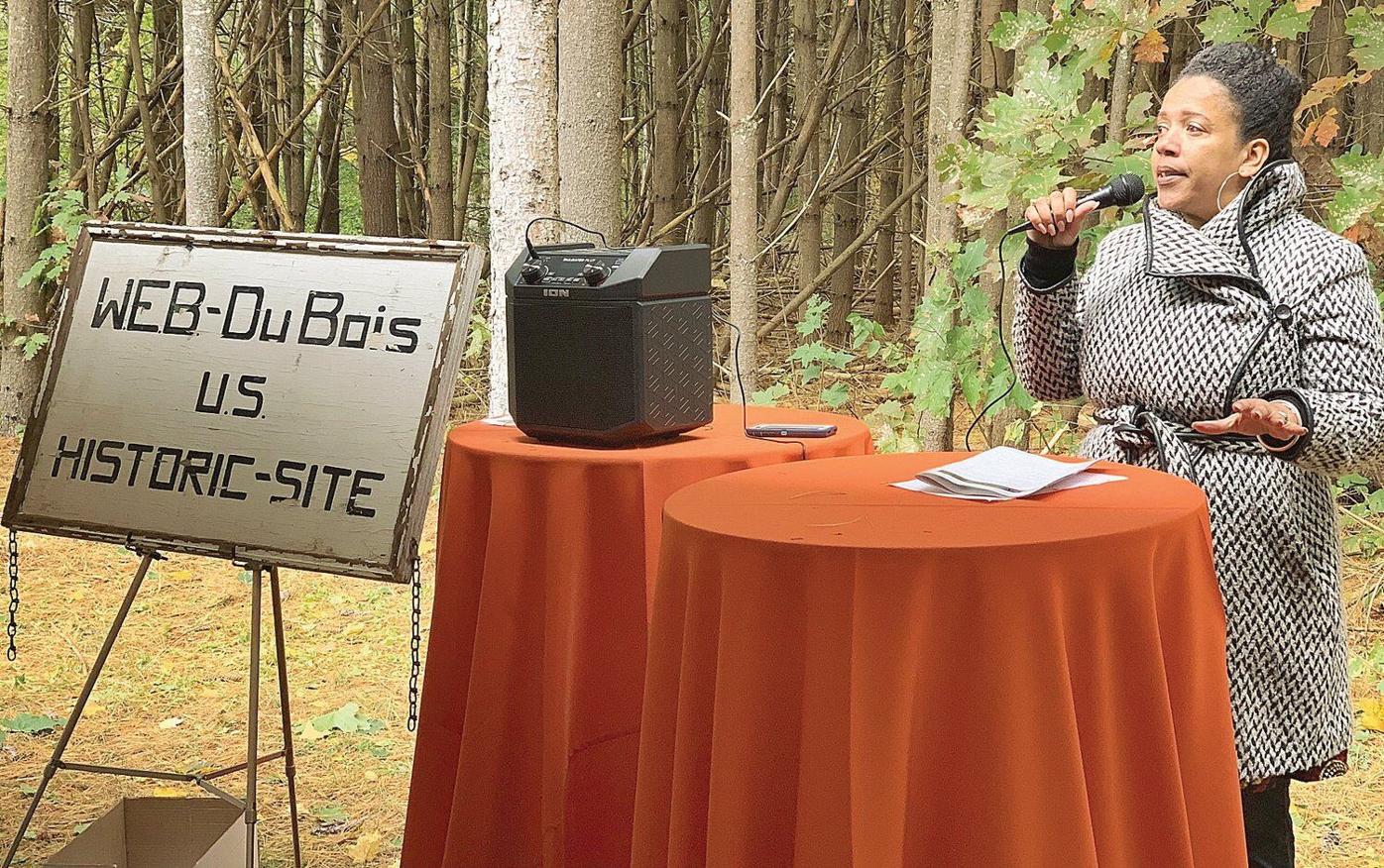 GREAT BARRINGTON — The wind piercing, they shivered while standing on "sacred ground," holding holy a slice of homeland that never was forgotten by the man who spent his childhood at this place.

It was the Burghardt farmstead, that of his maternal grandfather, that anchored the African American scholar, poet and activist W.E.B. Du Bois no matter where in the world he went, and no matter what storms threatened during a lifetime grappling with the question of human freedom.

It was one of two places that gave this town native that feeling himself.

Battle-Baptiste spoke Friday afternoon, at the 50th anniversary of the dedication of a memorial at the farmstead on Route 23, now known as the W.E.B. Du Bois Boyhood Homesite, a national landmark owned and maintained by UMass-Amherst. Speaking to the crowd of about 150 at an event pulled together by the town and the university, others noted the struggle it took for the town to get here.

An ideological war raged across the Berkshires in the late 1960s, during the effort to create the memorial to remember Du Bois' legacy, and to honor this early architect of the civil rights movement. Du Bois was born in 1868, just five years after the Emancipation Proclamation was signed, and his life and education placed him in a prime position to study the black American experience.

Radical and innovative ideas got Du Bois on a government watchlist, and a late-in-life turn to communism crushed his accomplishments in the view of veterans and other patriot groups.

The town Select Board tried to stop the memorial. But it was dedicated anyway, in 1969, on a "crisp, crisp New England fall day" much like this one, as Battle-Baptiste noted, which was attended by as many as 800.

Speaker Barbara Dean noted that Frederick "Fritz" Lord, an early supporter and organizer of the homesite who could not attend Friday's event, was fired from his job at a local real estate agency because of his role. She read from his notes, in which he said that the only thing "worse than being a communist sympathizer was being a black communist sympathizer."

Back then, the town Select Board members "did everything they could" to stop the memorial from happening, as board Vice Chairman Ed Abrahams noted.

When it did happen, it was surrounded by a heavy police presence, and a National Guard unit was on standby. On Friday, though, there wasn't a single lawman to be seen.

Town Manager Mark Pruhenski said that, soon, a statute of Du Bois will appear outside the library, and the town is making arrangements for sister city status with Accra, Ghana, where Du Bois moved to work two years before he died and where he was laid to rest at age 95.

"We're standing here on sacred ground," she said, noting that Du Bois also saw it that way. "This is the anchor by which this great man went from here to Harvard and out to the world."

There were readings and a tree planting. Jazz trombonist and composer Craig Harris' sounds were hopeful and striving, yet touched with melancholy.

Battle-Baptiste praised those who stuck it out 50 years ago when met with so much resistance. They might have had the spirit of Du Bois working in them, since they, like Du Bois, knew something.

"If black folks are free, then guess what?" she asked. "We are all free."