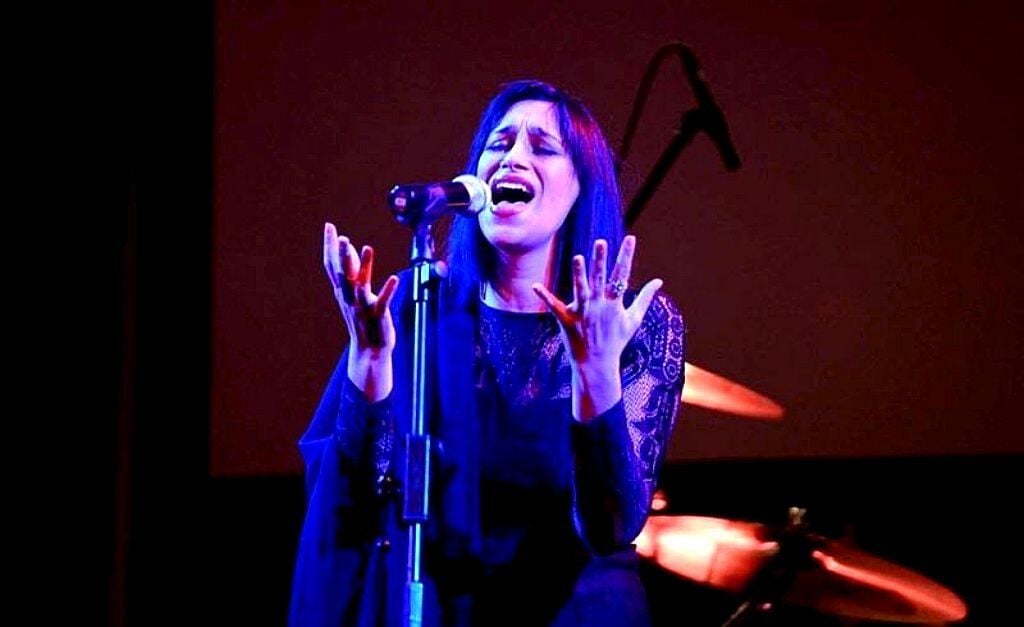 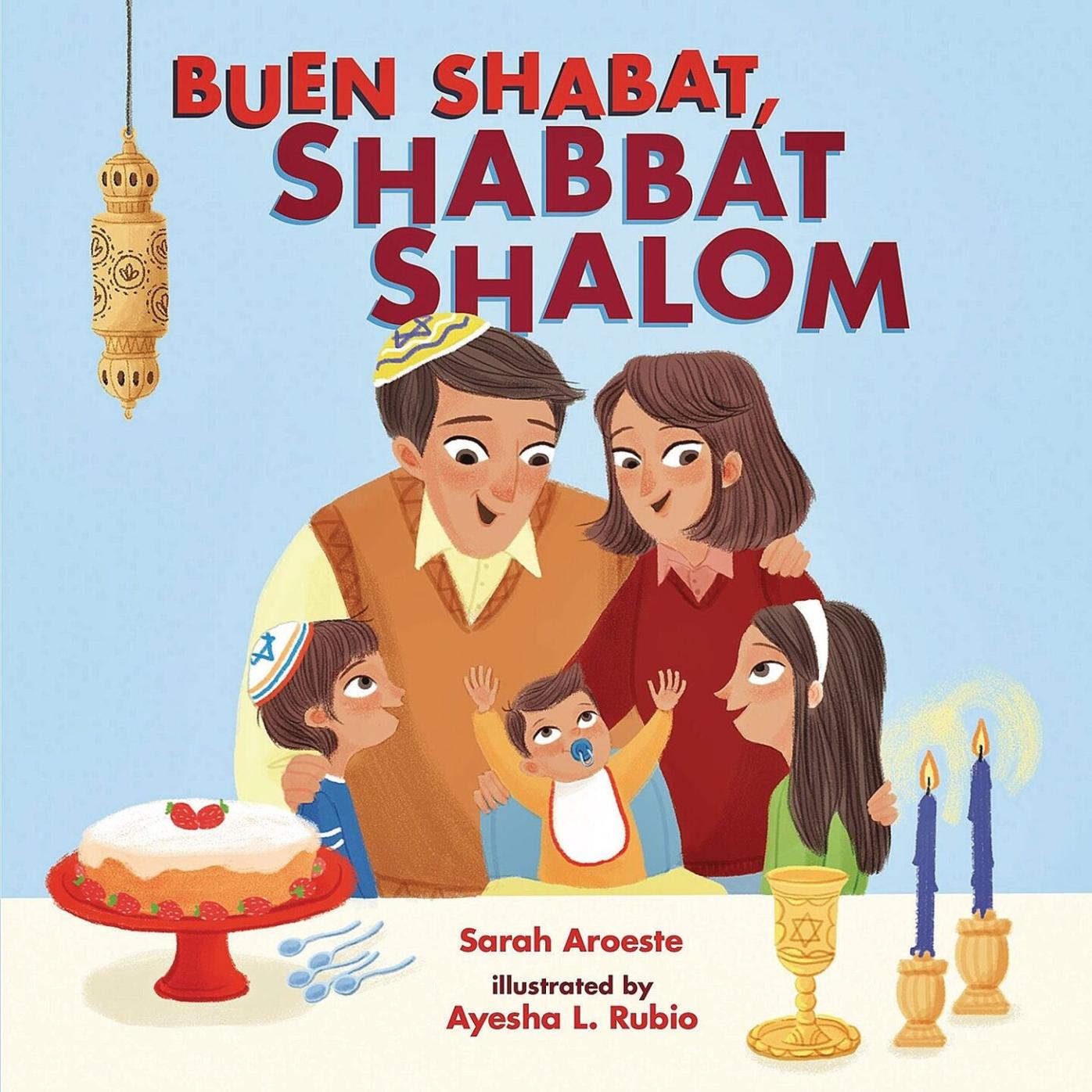 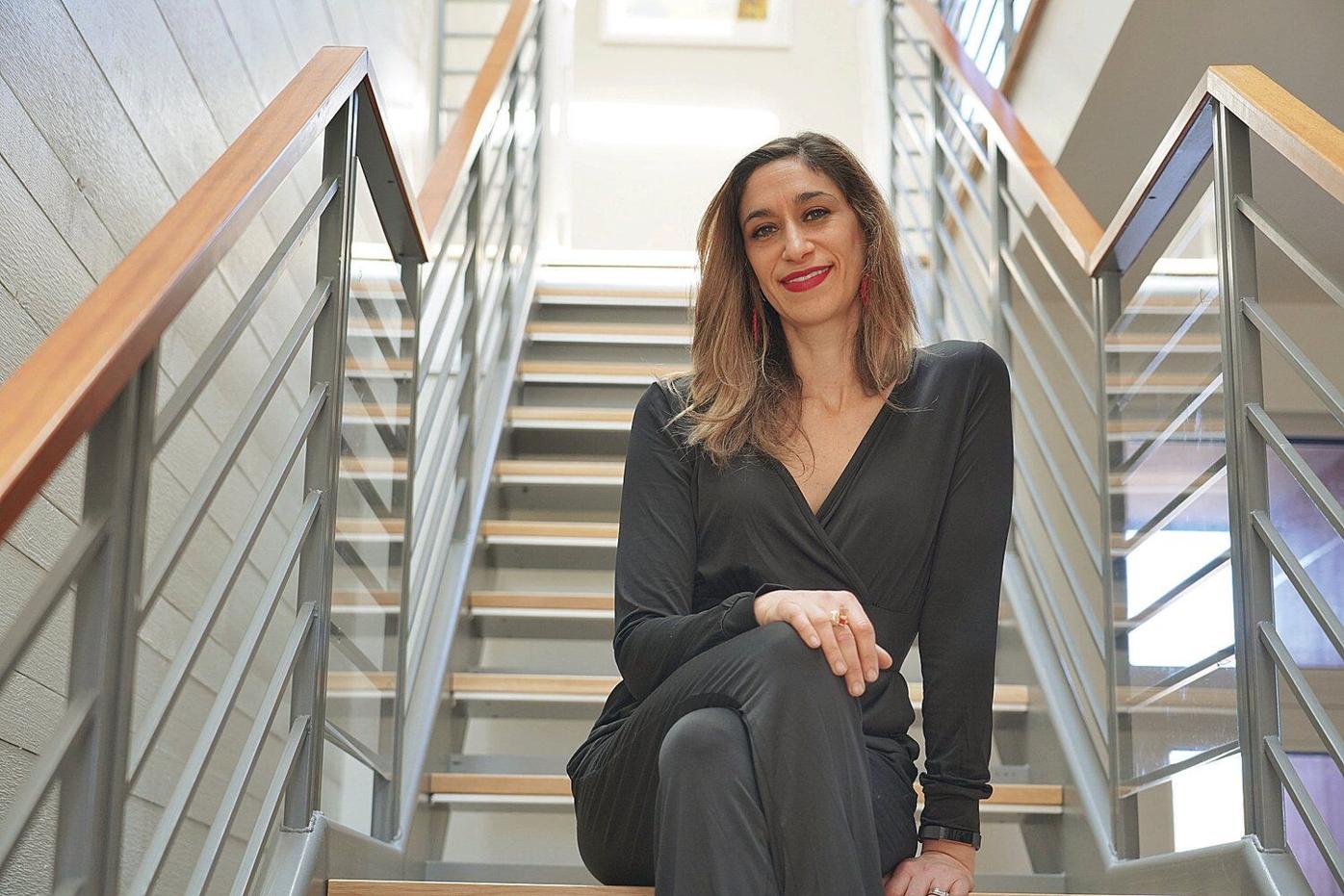 Sarah Aroeste, of Alford, shares her contemporary style of original and traditional Ladino music to audiences around the world. She is also a children's book author. 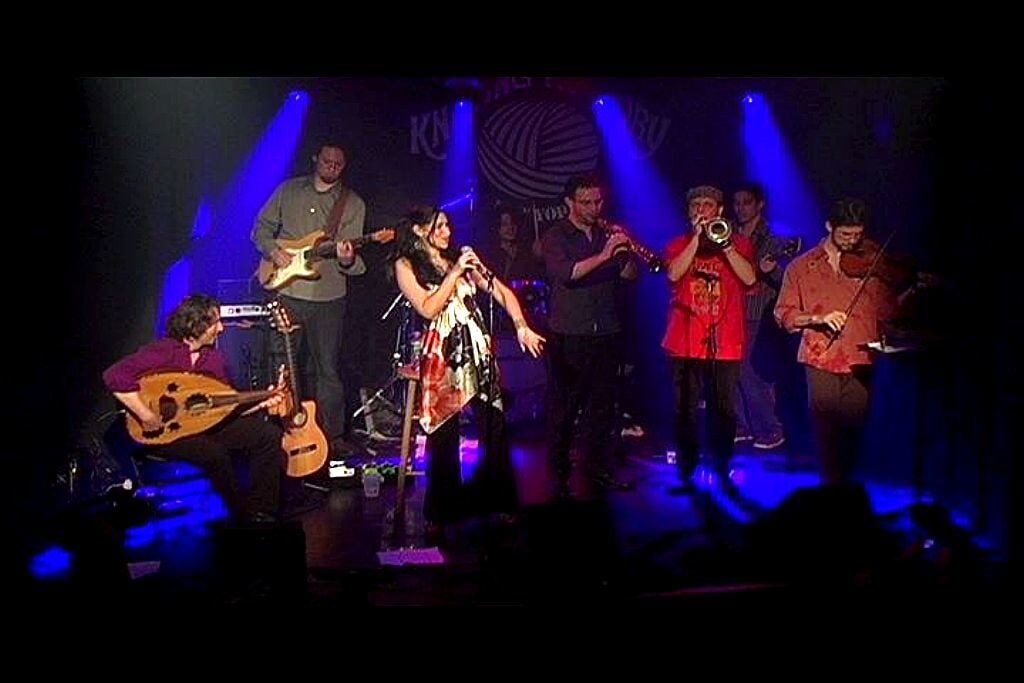 Aroeste first started singing Ladino music while studying in Tel Aviv, where she was paired with famous vocal coach, the late Nico Castel. 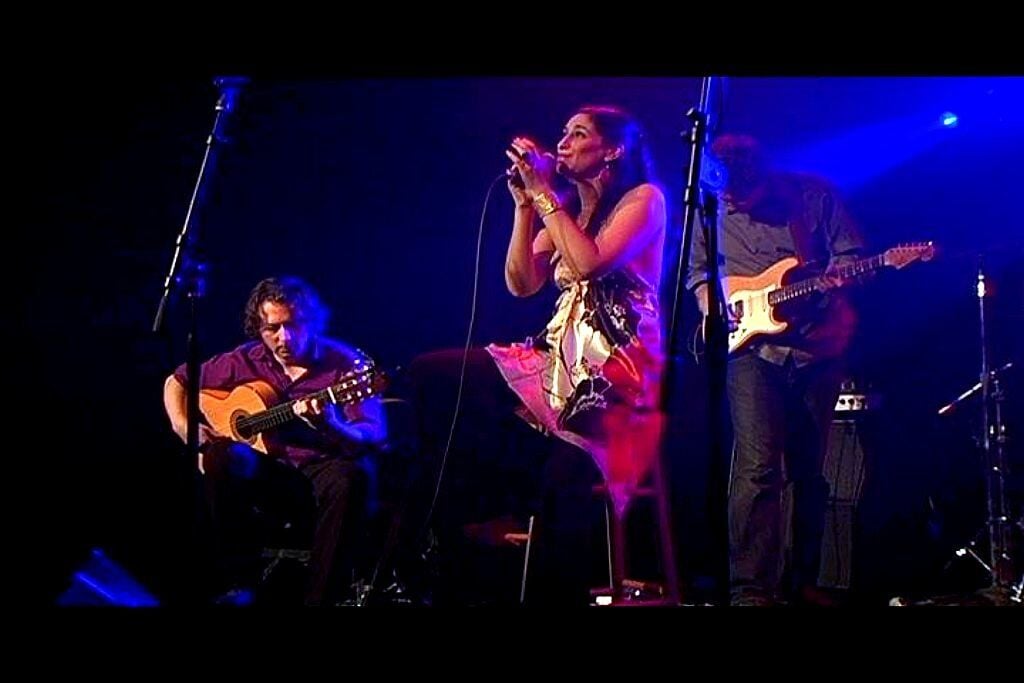 Aroeste originally trained as an opera singer before turning to her heritage and performing Ladino music.

Sarah Aroeste, of Alford, shares her contemporary style of original and traditional Ladino music to audiences around the world. She is also a children's book author.

Aroeste first started singing Ladino music while studying in Tel Aviv, where she was paired with famous vocal coach, the late Nico Castel.

Aroeste originally trained as an opera singer before turning to her heritage and performing Ladino music.

For Sarah Aroeste, of Alford, one of the world's most prominent cultural ambassadors of this esoteric Judeo-Spanish dialect, that "d" makes a world of difference.

Through music and writing — most recently a children's book, "Buen Shabat, Shabbat Shalom,"  being released March 3 — Aroeste, 44, has spent the better part of the past 20 years reclaiming her own past and that of a people who were nearly wiped off the map during World War II.

Quick history lesson: Usually when we talk of Jewish culture, here in the West we trend toward that of Ashkenazi Jews, those from eastern Europe. Think Yiddish, Matzah balls and klezmer.

Sephardic Jews, by contrast, originated from Spain and Portugal before their exile east. Think Ladino, bimuelos (a form of fritters) and the oud (a stringed instrument), among just a few of the Sephardic cultural touchstones that most of us have never heard of.

Beginning in 1492, by edict of King Ferdinand II and Queen Isabella, all non-Christians were given the choice of baptism or exile from the Iberian Peninsula. Aroeste's ancestors joined the thousands who fled.

Over time, as the Sephardic Jews traveled eastward throughout the Mediterranean region, their original Castilian Spanish language mingled and mashed with Hebrew, Arabic, Turkish, Greek, Italian, and French to become a singular dialect unto itself: Ladino.

Sephardic Jews would flourish in the Mediterranean region for nearly 450 years. "But World War II changed everything," says Aroeste. "Certain enclaves were wiped out — the language, the culture, the people."

Today, it's estimated that fewer than 100,000 people speak Ladino.

It wasn't as if Aroeste originally dreamed she'd one day champion an obscure past.

Born Sarah Silverman, she was raised in Princeton, N.J., listening to Bruce Springsteen. Her family never made much of its Sephardic Jewish roots beyond familiarizing themselves with a few food dishes and songs. Indeed, her grandfather, Julian Aresty, upon first setting foot on Ellis Island in 1912 had made haste to assimilate.

Aroeste herself was on the road to a career as a classical opera singer. In high school, she trained at Tanglewood's summer program. Her instruction continued at Westminster Choir College and Yale University. Then, in 1997, she traveled to Israel, and that's where fate would point her to a distant past in need of a modern enthusiast.

In Tel Aviv, she was paired with the famous vocal coach, the late Nico Castel, who happened to be one of the world's leading Ladino experts.

"So in between opera coaching, he would teach me traditional Ladino songs," Aroeste recalls. "When I came back to the United States, I did a series of recitals that included a section of Ladino music. Without fail, after every performance, people would come up to me and rave that the Ladino portion was their favorite. Clearly, my heart was in it. I sang the music with more passion."

Over the next couple of years, she got her hands on every piece of Ladino music she could find. She took Ladino lessons at a Sephardic synagogue in New York City. She delved deep into her own ancestry, traced to the formerly dynamic Greek-Jewish community of Thessaloniki, in Macedonia, which fell under German occupation during World War II. Ninety percent of Thessaloniki's Jews were murdered.

"I was drawn to all of the history and culture," she said."I needed to know everything I could."

The timing proved perfect. By 2001, here in the West, Jewish music was experiencing a huge revival in the form of Ashkenazi klezmer put to funk, jazz and rock. But no similar revival existed for Sephardic music. That's when Aroeste summoned the gumption to break some startling news to her mother.

Though supportive, her mother strongly advised her to have a back-up plan.

So as not to be confused with the comedian Sarah Silverman, Aroeste adopted her mother's Sephardic maiden name and set about recording her first album, 2003's "A la Una: In the Beginning."

The collection consisted of traditional Ladino compositions — songs of love and loss — put to contemporary styles, including traditional instrumentation intermixed with electric guitars and drums.

A review in Village Voice praised it, declaring: "Ethnic eclecticism from a sultry warbler of Greek ancestry ... (Shakira eat your heart out!)"

The album drew the attention of producers for National Public Radio's "Morning Edition," who invited her on. Perhaps intending to incite controversy, the producers also brought in the prominent Sephardic rabbi Marc Angel and played for him a particularly brash snippet from Aroeste's album. What did he think? He loved it.

"He said, `I think the more people who hear it, the better. Any way to get Ladino out into the world, the better," recalls Aroeste. "It launched my career. It opened many doors."

She has since released four more albums. They include her own original songs written in Ladino. The recordings borrow from pop, rock, funk, jazz, and even gothic metal (just a touch).

Her fourth album, 2016's "Ora de Despertar," marked a turning point for the new mother of two young children. The album is the only known all-original contemporary Ladino children's album in existence. It was soon followed by an illustrated children's book of the same name, also considered the first of its kind in Ladino.

Keeping to the children's genre, she has also written the text for the illustrated board book "Buen Shabat, Shabbat Shalom," about a Sephardic Jewish family preparing to celebrate Shabbat. It's being released March 3, by Kar-Ben Publishing and distributed by PJ Library.

Aroeste has performed all over the world. In March, she'll be in New Mexico, then Macedonia.

As for her connection to the Berkshires, she's been coming here since she was a child. Indeed, Gina Hyams' 2015 book, "The Tanglewood Picnic: Music and Outdoor Feasts in the Berkshires," includes a photograph of Aroeste at age 5 with her father on the Tanglewood lawn.

Six and a half years ago, Aroeste and her husband — Jeffrey Blaugrund, co-founder of Braise Worthy, a line of frozen meals — moved here permanently and built a house in Alford. She serves on the South Egremont School's Parent Teacher Organization.

Aroeste is working on her sixth record, what she calls her "most personal" to date, "The Monastir Project." It brings together Macedonian and Israeli musicians to honor the once-vibrant Sephardic Balkan community of Monastir — her grandfather's hometown.

Now called Bitola, the city was devastated during World War II. She's been digging through archives at the National Library of Israel to find songs tied to the Monastir community.

The current citizens of Bitola are mostly non-Jews, she said, "but they have demonstrated their love and respect for Jewish history now lost."

The album, she says, will serve to "return that love."