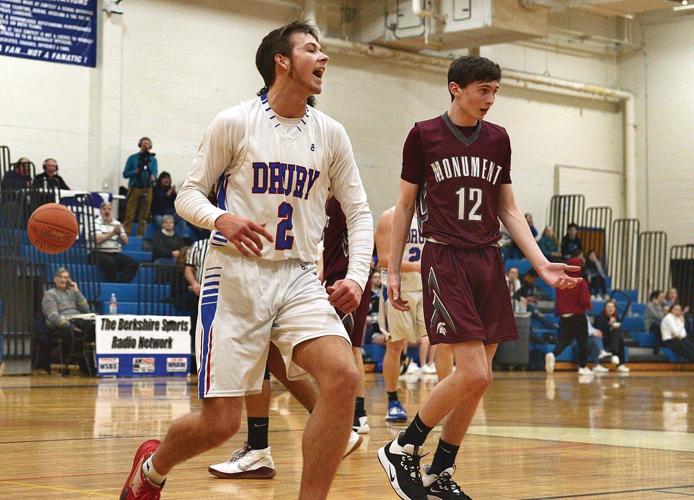 A fired up Scott McGuire celebrates a made and-one basket that earned him the title of Drury's all-time leading scorer. 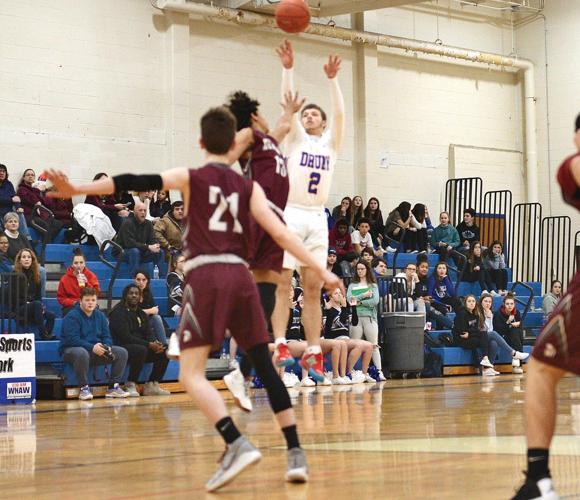 Scott McGuire fires a 3-point shot over the outstretched arm of Dion Brown in a win against Monument Mountain at Drury on Wednesday. 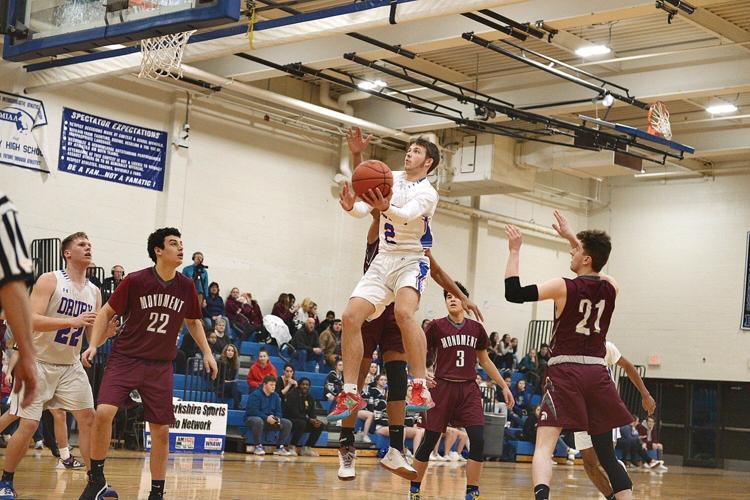 Scott McGuire flies through the air on his way to the basket in Drury's win over Monument Mountain on Wednesday. 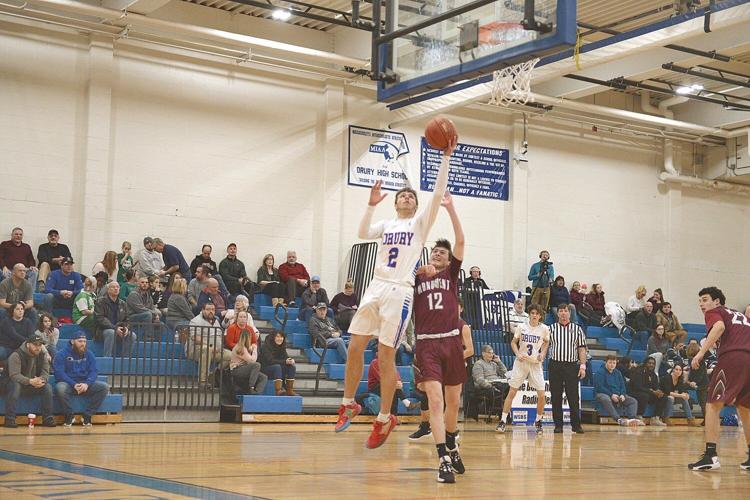 A fired up Scott McGuire celebrates a made and-one basket that earned him the title of Drury's all-time leading scorer.

Scott McGuire fires a 3-point shot over the outstretched arm of Dion Brown in a win against Monument Mountain at Drury on Wednesday.

Scott McGuire flies through the air on his way to the basket in Drury's win over Monument Mountain on Wednesday.

NORTH ADAMS — To say that Drury's Scott McGuire Jr. had a standout night would be unfair — he established his high school basketball legacy as a stone cold shooter. On a night he would become the all-time leading scorer in school history, he left no doubt about his scoring prowess with a 52-point performance in Drury's 90-87 win over Monument Mountain on Wednesday.

"He knew how important this game was," Drury coach Jack Racette said. "We're .500 and battling for tournament time and he's a senior and knows what it takes."

McGuire needed 20 points to top Reece Racette as the school's all-time leading scorer, and he did it on an and-one to begin the second quarter. Early in the fourth quarter, he surpassed Tommy Bullet, who had the school's record for points in a single game with 43, and the Blue Devils (6-5) needed all 52 points from McGuire to upend the Spartans (7-4).

"To shatter the record — it is an awesome night for that kid."

While McGuire's name was etched multiple times in the record book, he entered action thinking about the game Drury played at Monument Mountain back on Dec. 20.

"We knew coming in that we had to make a statement because they beat us down in Monument by 20," McGuire said. "We had to come in and protect the home court. I was just doing what I could and my teammates were finding me with the ball. I kept getting different match-ups and caught heat. My guys kept feeding me the ball and it gave us a push.

"I don't overthink — I just come in the gym ready to play."

The stat sheet almost didn't have enough room to record McGuire's opening quarter. The senior was on fire from the opening tip, scoring 18 of Drury's 22 points in the frame. Meanwhile, the Drury defense held the Spartans to just 12 points.

Back after the break, McGuire didn't waste any time earning his spot in Berkshire County's top five all-time scorers for boys basketball. The converted and-one pushed Drury's lead to 13.

However, the Spartans weren't going to go quietly. While the Blue Devils outscored them by four in the frame, Monument was starting to find its rhythm.

Dion Brown, who finished with a team-high 32 points, dropped a quick nine points as the Spartans entered the break trailing 47-33.

"They stayed together and that is the most important thing," Monument Mountain Coach Randy Koldys said of his teams demeanor. "I was really proud of how our guys really stuck together and knocked that 14-point lead down quickly."

Zack Goffin came alive in the third quarter for the Spartans. Not only did he finish with seven boards in the second half, but he scored nine points in the frame and the Spartans, as a team, scored 27, cutting Drury's lead to just six, despite McGuire continuing to scorch the earth with 12 points in the stanza.

"Scotty is a great threat and there wasn't much we could do to stop him tonight," Koldys said. "We doubled him in the second half — he still had 22."

After doing most of the game's heavy lifting, McGuire had 10 points in the fourth, including two made 3-pointers, but Hunter Sarkis and Keeghan Vidal came up big late.

"Brown is a great player and he was really denying Scotty [in the fourth]," Racette said. "[Sarkis and Vidal] are both seniors and they have to start playing like it."

The duo met their coach's standards, helping Drury pull away with back-to-back and-ones, giving the home team some breathing room with three minutes left. Vidal scored seven points in the fourth quarter and finished with 14. Meanwhile, Sarkis had five in the frame and closed with 11.

With less than a minute left, The Spartans had a few opportunities to tie the game, with the help of a save by Brown while lounging out of bounds, but it would not be.

The Blue Devils are floating above .500. More importantly, their playoff hopes are alive and well.

"We aren't seasoned yet, but we have goals and play in a tough division," Racette said. "We always talk about not running from anyone and that we'll play the toughest schedule. We just have to get to 10-10 and get our ticket — we'll be okay.

Jake Mendel counts down his top five stories of 2020

Not much changes outside of the calendar, but it is pretty safe to say that everyone has had just about enough of 2020. Not only did people ha…

Jake Mendel | 2020 in Review: Six Berkshire County sports stories that stood above this past year

A week-by-week and day-by-day mentality works wonders in the sports world. Each cliché used by coaches when speaking to media is often overloo…