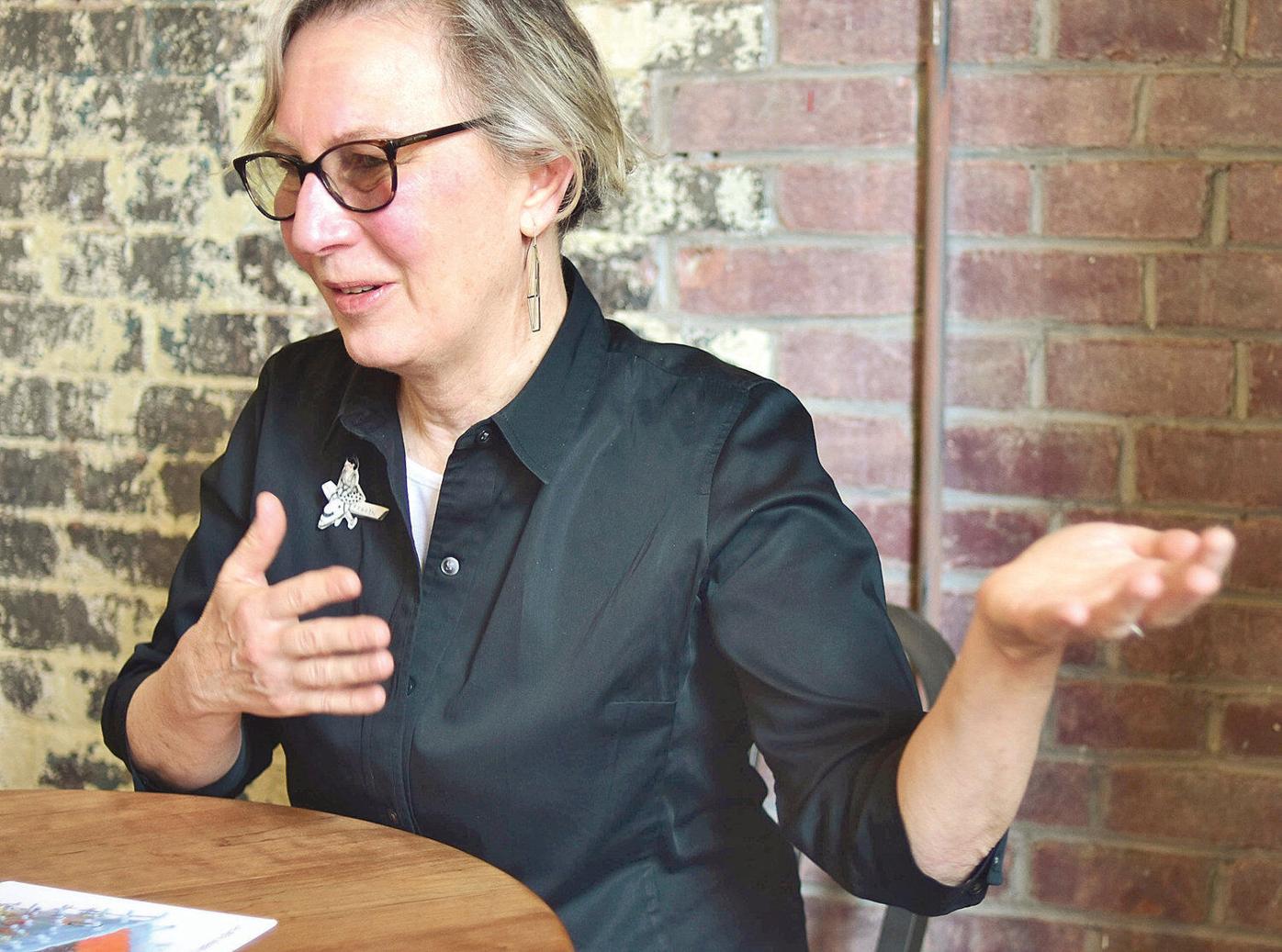 Leslie Ferrin, director of Ferrin Contemporary, began her career as a gallery owner 40 years ago with the opening of Pinch Pottery in Northampton. She spoke about her career over a cappuccino at Tunnel City Coffee at Mass MoCA. 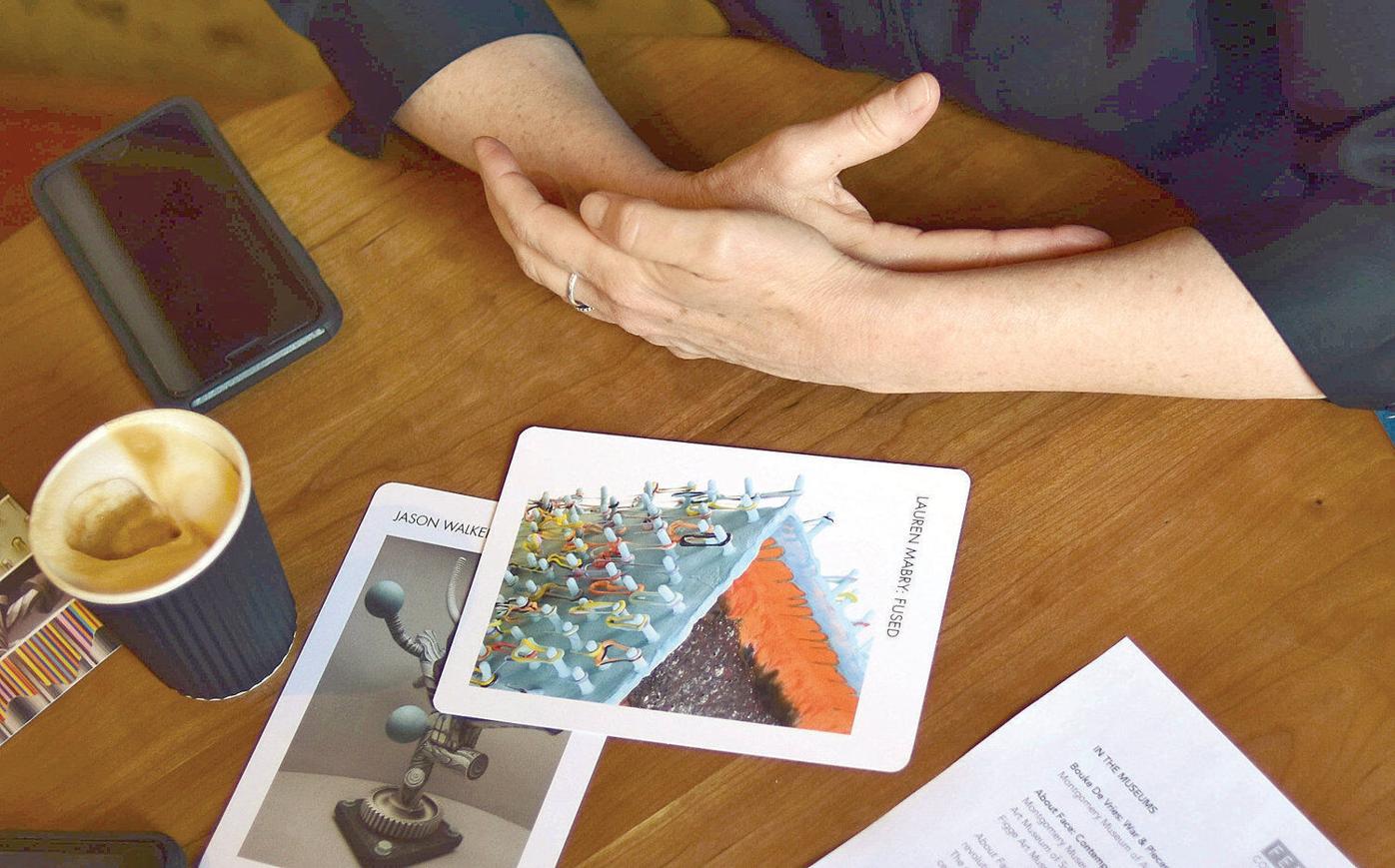 Leslie Ferrin, director of Ferrin Contemporary, speaks about the show, "Lauren Mabry: Fused," at the gallery, over a cappuccino, at Tunnel City Coffee at Mass MoCA. 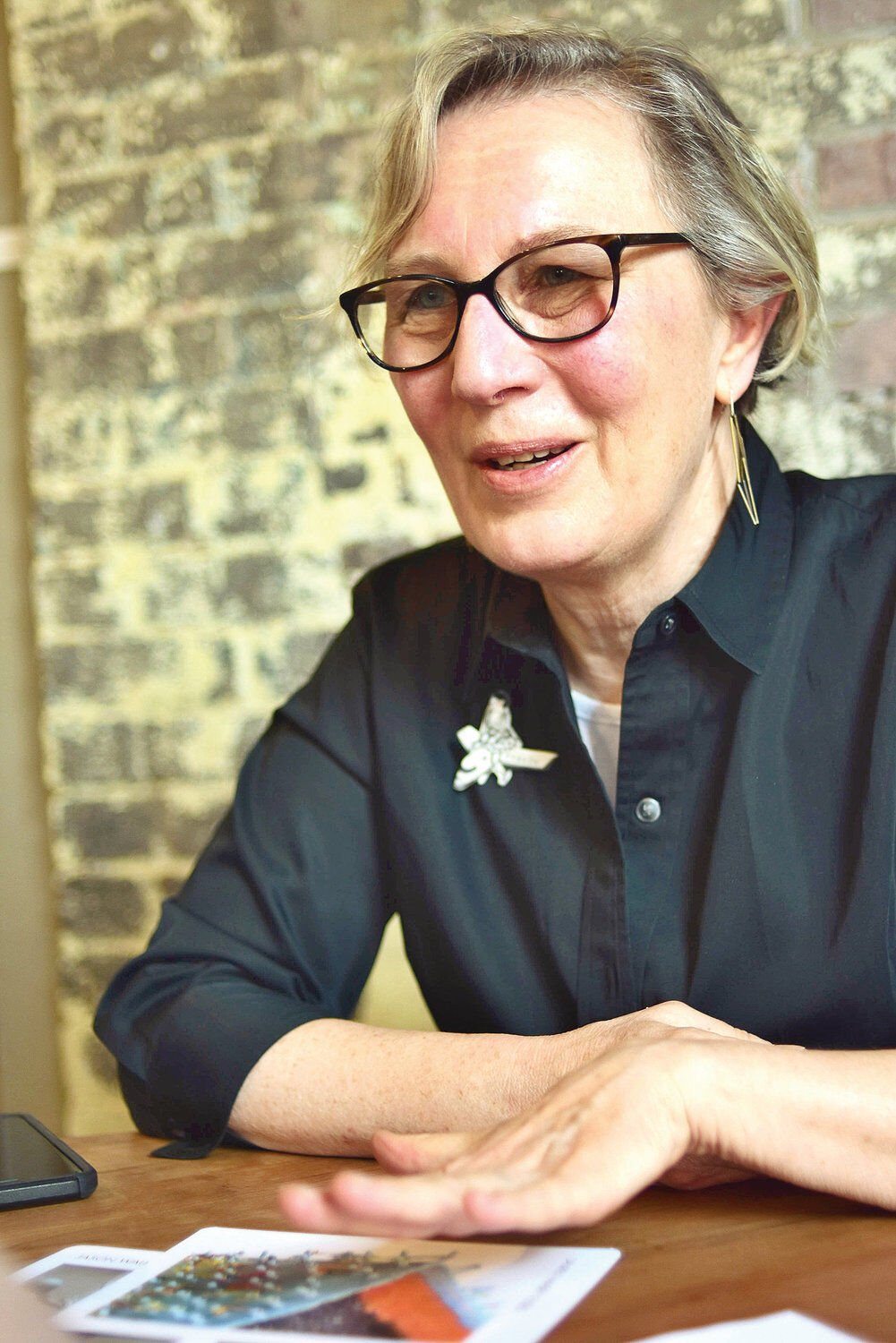 Leslie Ferrin, director/founder of Ferrin Contemporary speaks about upcoming shows at the gallery, over a cappuccino at Tunnel City Coffee at Mass MoCA.

Leslie Ferrin, director of Ferrin Contemporary, began her career as a gallery owner 40 years ago with the opening of Pinch Pottery in Northampton. She spoke about her career over a cappuccino at Tunnel City Coffee at Mass MoCA.

Leslie Ferrin, director of Ferrin Contemporary, speaks about the show, "Lauren Mabry: Fused," at the gallery, over a cappuccino, at Tunnel City Coffee at Mass MoCA.

Leslie Ferrin, director/founder of Ferrin Contemporary speaks about upcoming shows at the gallery, over a cappuccino at Tunnel City Coffee at Mass MoCA.

One day, she's sharing images of new ceramic works at gallery openings in New York City. The next day, she might be sharing images of work from a studio visit with one of the artists she represents. Still, the images might be from one of the many ceramic arts conferences she attends and speaks at; from a workshop at Project Art in Cummington or from an opening at Ferrin Contemporary in North Adams.

But the images only capture a small piece of her multi-faceted role, which includes: curator, tour guide, gallery director, collection specialist, agent and mentor.

Recently, Ferrin, director of both Project Art and Ferrin Contemporary, took time out from her busy schedule to have coffee with The Eagle.

"It's 40 years this year, that I started my business," she said, in between sips of cappuccino at Tunnel City Coffee at Mass MoCA, a short walk from her gallery space on the ground floor of Building 13 on the Massachusetts Museum of Contemporary Arts campus. "The theory was to run the business from the artist's perspective; to do for artists what I wanted done for me as an artist and wasn't finding for myself. I think a lot of galleries are run by people who used to be artists, so they have that perspective. It's a really creative role to be the one who brings the [artist's] work into the public. You have to understand the artist's perspective and the public's perspective and then bring those two things together."

But the thing she enjoys the most is working with the artists she represents.

"I think the role I get most excited about is seeing new work emerge through a deadline," Ferrin said. "The deadline for Lauren [Mabry, who's show opened the first weekend of May], we started talking about it last fall. I knew she was doing new work, [so the deadline] was about sort of shaping the exhibition ... It's a relationship of my knowledge of the materials and my knowledge of the struggle, the artistic struggle, an artist goes through to get to a new body of work.

"That's what I think I bring to the table, that and sort of the exhibition design, familiarity of the works in a three-dimensional space and the information systems that need to be in play by the time we [open the show]. Having those deadlines, I think, is really important for the artist to finish the work. And, on the other side, it's the deadline for the client or collector to make the decision about the work. The role I play is kind of that of a cat herder. With Lauren, we know there are several museums that have been watching her work; thinking about acquiring a piece for their permanent collection. It's my job to keep them informed. And, before the show opens, present them with their options, and help them raise the money, or raise the awareness within their collector groups, to help acquire that work."

Understanding the artist's mindset and handling the business side, she said, come naturally because of her upbringing.

"My mother's an artist, my father's a businessman. She had gone to school for and was an art teacher and was friends with artists. So, when we were living in New York, the artists would come in to seek their fortunes. I was always exposed to artists in our home environment," Ferrin said. "I just grew up in this environment, in the Hudson Valley, surrounded by people both in the protest movement and in the arts, with my father who worked on Wall Street. It was the '60s and early '70s. I feel I got the best of both sides, the best of both of their bests."

She began her career as an artist, working first with ceramics in high school and then in college, where she studied both ceramics and glass.

It was in Northampton, in 1979, that Ferrin, freshly graduated from Hampshire College, opened Pinch Pottery, a working studio, shop and gallery space (that would become Ferrin Gallery)on the bottom floor of Thorne's. She would run the shop/gallery space with ceramic artists Mara Superior and Barbara Walch, while the working studio would be run by the three women and four additional female artists.

"I was making and selling at the same time, but my own work was not suited for the marketplace, because of the rise of the craft movement and things [being created in that movement] were objects for the retail market place," she said."I was more of [the mindset that] I wanted to make it once, not multiples as a participant in a retail economy. Not that I don't think that was a good model, it just didn't fit the way my brain works. So, I turned into the person that managed the gallery space."

Eventually, the gallery/shop space would separate from the working studio, which would relocate to Hadley as East Street Clay Studios. Pinch Pottery and Ferrin Gallery moved into a retail space on Main Street in Northampton and took on a new partner, David Clark. After 20 years in Northampton, the Ferrin Gallery became a virtual space, existing only online. In 2004, Ferrin Gallery, helmed by Ferrin and Clark, took on retail space in Lenox, before moving to North Street in Pittsfield, where it existed from 2007 to 2012. She opened Ferrin Contemporary, the latest evolution of Ferrin Gallery, at Mass MoCA in 2014.

It was also in 2004, that Ferrin and artist Sergei Isupov, who she represents, purchased a renovated 8,000-square-foot former mill building in Cummington. From there, she runs Project Art, a program that offers ceramic artist residencies, internships and studio rentals, as well as workshops hosted by Ferrrin Contemporary artists. In addition, the space hosts events and exhibitions.

"We sort of gambled on each other, because most people don't own a building together, work together, live in the building together, and are dependent on one another to a certain degree. But it's worked out really well," she said. "It's a big old mill building, so it's perfect for multiple uses. As our needs changed, the building was adaptable for that. And Cummington is great, because it's 40 minutes from everything. For us, living there, means we're accessible to North Adams, Pittsfield and Northampton; the Berkshires and Pioneer Valley. Our lives, both socially and economically depend being accessible to both of those. Our clients are from all over the world, so when they commit to coming to Cummington, they are committing to coming to both North Adams and Northampton as well.