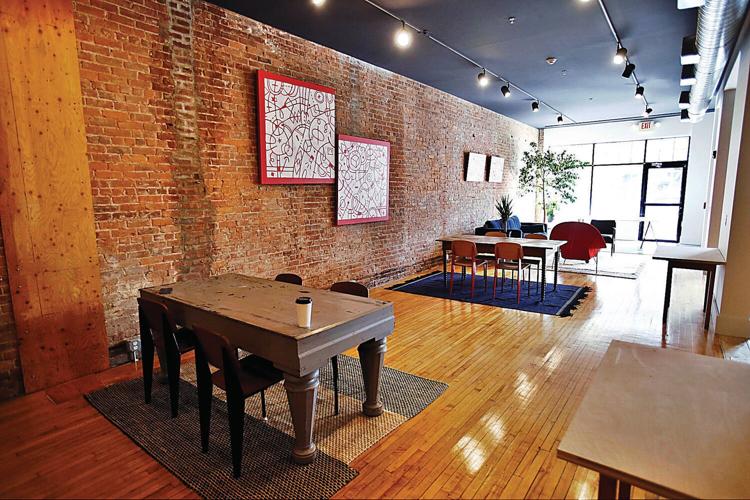 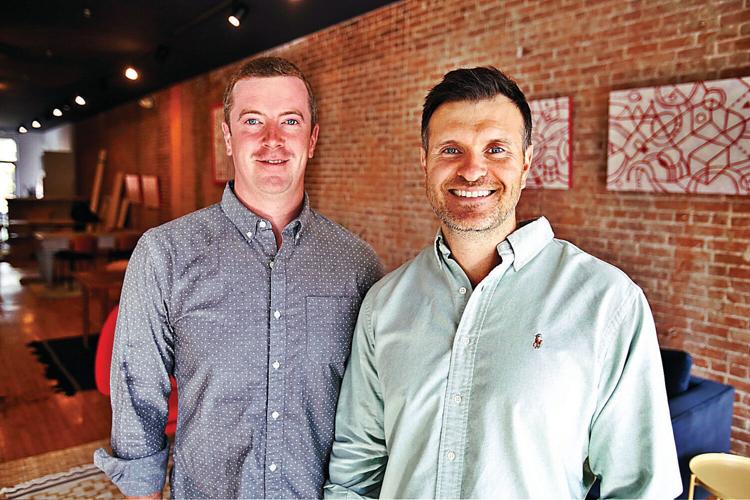 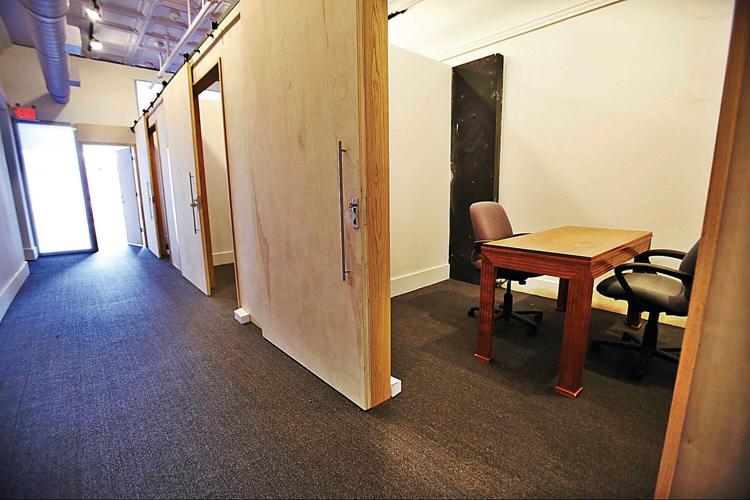 Individual office spaces are one of the working options that are available at Frameworks on North Street.

Individual office spaces are one of the working options that are available at Frameworks on North Street.

PITTSFIELD — Co-working, a trend that officially began in San Francisco and reached North Adams in 2015, has arrived in the Berkshire's largest municipality.

Two Berkshire entrepreneurs are in the process of opening "Frameworks," a co-working space on North Street's 400 block that is located in two vacant store fronts that were previously occupied by a couple of arts-related small businesses. The space officially opens for business on Monday.

Tim Burke and Scott Moraes, who are involved with Pittsfield-based Mill Town Capital, an impact investment fund, have created a venue in this 5,000-square-foot area that provides work space and office amenities that can be accessed by up to 60 individuals at the same time.

"It's shared office space, basically," Burke said. "It's a combination of open desk work space and private offices with all the amenities of a standard work environment. So the idea is a shared economy, with a number of users or members sharing the costs, utilities and amenities."

Frameworks offers fiber optic internet, conference rooms, video conferencing technology, a multi purpose lounge, storage areas and lockers, scanners, printers and fax devices, and desks and tables, according to both Burke and Moraes. There's even a kitchen. Burke said the partners plan to offer discounts to local businesses that would be interested in supplying food. The membership model is similar to a gym, where participants pay a monthly fee to use the facilities. Day passes are also available. Prices range from $185 per month for open desk space, to $235 for dedicated desk space, to $450 a month for standard office space and $900 a month for premium office space. Day passes are $25 per day.

The space meets many needs for those who are employed in the modern workplace.

"It's great for entrepreneurs," Burke said. "It's great for people who work either independently, who work from home or who work for companies where they telecommute. It's something that makes them more energetic or useful than from a home office.

"It's like having all the amenities without the burden of having to set them all up yourself."

A Pittsfield native who graduated from St. Joseph Central High School, Burke is Mill Town Capital's managing director. He lived and worked in Boston for 15 years, including seven years in the biotech industry in

Cambridge, before returning to Pittsfield nine months ago to work for Mill Town Capital, which invests in entrepreneurs and start-ups in the Berkshires. Mill Town Capital helped finance Frameworks with a $10,000 technical assistance grant from the Pittsfield Economic Revitalization Corp., and has applied for another grant with MassDevelopment

"Frameworks is basically our first investment," Burke said. "We thought it was important to build a place as a resource for entrepreneurs, to drive some energy downtown, and be part of that entrepreneurial ecosystem."

Co-working is one of the trends that have developed as advances in technology have begun to change the structure of the traditional workplace. The advent of Wi-Fi, laptop computers and other mobile devices have made it possible for employees to work from virtually anywhere.

The origins of co-working began in Germany in 1995, with the formation of C-Base, a so-called "hackerspace" where people with an interest in computers could gather together and work on projects in one open area, according to deskmag.com. which writes about the co-working industry.

The first official co-working space opened in San Francisco in 1995 (the term "co-working" wasn't officially used to describe the activity until four years later). The trend first reached the Berkshires in January 2015 when Cloud 85 opened in North Adams, and it has continued to grow. By the end of this year, 14,000 co-working spaces are expected to be in operation worldwide, according to deskmag.com.

In 2017, co-working spaces are expected to have more members (86 percent), higher income (81 percent), more events (71 percent), and a greater sense of community (84 percent), percentages that are about the same as last year, according to deskmag.

Pittsfield is ready to have its own co-working space, Burke said.

"First and foremost it doesn't have one already and the closest one is in North Adams," Burke said. "So if you're in the central or southern Berkshires you typically don't have a resource like this. And what you see is that co-working space can work anywhere.

"They work best in high density places like Boston or New York but there's no reason why it can't work in Pittsfield, too," he said.

Before getting underway, Burke, Moraes and a third original partner, Michael Bloomberg, floated the idea on social media to see if people would be interested in having a co-working space in Pittsfield.

"We had 150 responses in a few weeks from a Facebook post," Burke said. "We felt that we got such a positive response initially that there would be some level of demand. We thought there was enough critical mass to support this."

Moraes, who co-owns Radiance Yoga on North Street and is a partner in Mill Town Capital, said he and Burke have been working on the concept for Frameworks since last December. Bloomberg left the project to pursue an MBA at Cornell University, Moraes said.

"Mike was incredibly helpful in the formation," Moraes said.

"From a community-oriented standpoint we're tying to make the area grow," Moraes said. "This is a place for entrepreneurs to get together collaboratively."

A co-working space in Pittsfield "enhances the quality of life" here, Moraes said.

"A lot of people want to live here because we have a great quality of life," he said. "This is a way of increasing their chances of making it happen.

"I like to think of this as something that could increase a person's luck."