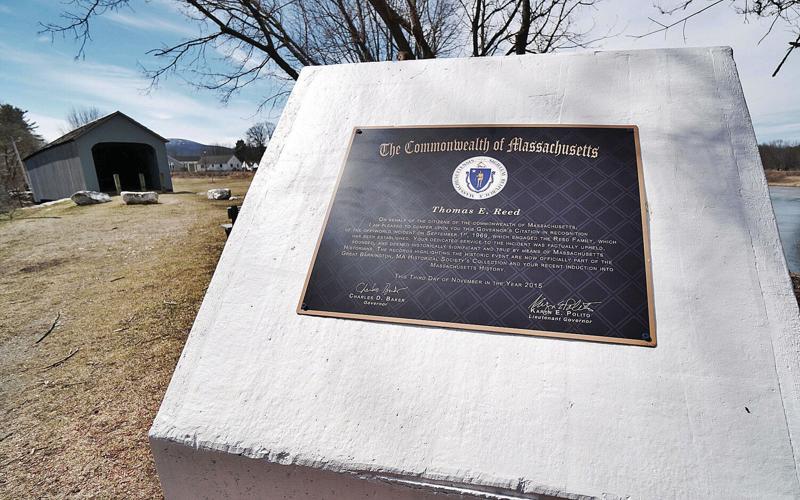 A monument to a UFO incident in 1969 is located near the Old Covered Bridge in Sheffield. Town officials, who already have ordered it moved once, say the monument is still on town property and must be relocated again. 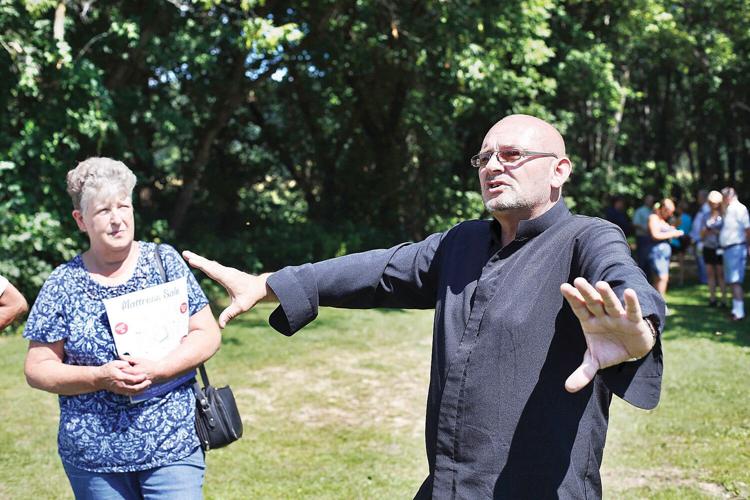 During the 2015 dedication of the Sheffield monument, former resident Thom Reed describes his experience as a 9-year-old in 1969, when he and family members had an encounter with what they believe was a UFO in a field near the Old Covered Bridge.

A monument to a UFO incident in 1969 is located near the Old Covered Bridge in Sheffield. Town officials, who already have ordered it moved once, say the monument is still on town property and must be relocated again.

During the 2015 dedication of the Sheffield monument, former resident Thom Reed describes his experience as a 9-year-old in 1969, when he and family members had an encounter with what they believe was a UFO in a field near the Old Covered Bridge.

SHEFFIELD — A memorial marking the location of a 1969 close encounter, known as "our nation's first off-world/UFO incident," is going to be moved.

During a recently conducted land survey, the town found that the memorial, as well as a bench and lighting decorating the area, is still on a town right-of-way easement and must be removed by the owner or the town will do so in May, according to Town Administrator Rhonda LaBombard.

The memorial was purchased with donations from community members and some of the 40 people who witnessed the unidentified flying object.

"It's kind of on town property and no one decided it could go there," LaBombard said. "The town has bylaws and if we let one place put something up then why can't someone else? I don't want that to happen."

The 5,000 pound concrete structure was installed in 2015, and moved a few weeks later after officials discovered it had been placed on town property. Some people said the marker detracted from the beauty of the historical replica of the 180-year-old bridge that went up in flames in 1994. The marker was moved 30 feet to Pine Island Farm, which abuts the Old Covered Bridge. In 2017, two benches and light fixtures were added to the area, though one bench is no longer there.

The Select Board gave LaBombard permission in January to send a copy of the land survey to the owner(s) of the memorial and a notice that the items will be moved by the town if they are not picked up prior to May. It's not clear who actually owns the monument.

News that Sheffield is planning to remove the memorial was a surprise to Louis Aragi, the farmer who believes the memorial is on his land, and Thom Reed, one of the four people who had a close encounter near the bridge on Sept. 1, 1969.

"This isn't fair to the community," said Reed, who grew up in the area but now lives in Kentucky. "It's not right having nothing there."

Reed, who has been the most vocal about what happened that night, said he is confused as to why the memorial's position is an issue because he worked with town officials to find the memorial's current placement.

"She chose the spot herself," he said of LaBombard.

Reed said UFO enthusiasts, including those who funded the memorial, bench and lighting, may take legal action to prevent the memorial's removal.

"This has come up more than once," Reed said. "We're not done with the monument."

The monument, which sits at the end of the covered bridge, is a 6-foot tall, white, concrete block bearing a plaque from Gov. Charlie Baker's office embedded on one side and the Massachusetts seal on the other. The plaque reads, in part, "This Governor's Citation [is] in recognition of the off-world incident on Sept. 1st, 1969, which engaged the Reed Family, which has been established."

The memorial is flanked by a bench donated by Reed and the International UFO Museum Research Center in Roswell, N.M., as well as two black light posts. Roswell is renowned as the site of an alleged 1947 UFO crash.

Reed was 9 on that September night in 1969 when he and others say they had their close encounter.

He was riding in a station wagon with family — his mother, grandmother and brother — crossing the covered bridge on their way home when Reed said his grandmother looked back to see a "self-contained glow" behind them that seemed to move through the trees. Once the car was in a clearing, Reed said, it was flooded in light with an amber glow on both sides of the dirt road.

The car came to a stop and everything seemed "really calm," Reed said, and there was a shift in the barometric pressure. The dead silence was broken by a chorus of loud crickets and frogs.

After that, Reed isn't sure what happened. He has brief memories of being in something like a hangar with other people. The next thing he knew, Reed was back in the station wagon, but his mother and grandmother had switched spots and more than two hours had gone by.

The event was reported on by WSBS radio as people called in with their accounts of witnessing strange lights that night. In all 40 people came forward, including residents of Sheffield, Great Barrington, Stockbridge and South Egremont.

The Great Barrington Historical Society in 2015 deemed the account an "off-world incident ... historically significant and true," and voted to admit it into its archives. That decision has been viewed by some as the first officially recognized off-world case.

The 1969 sighting has been the subject of many television shows — "Discovery Channel's Alien Mysteries," "Travel Channels Paranormal Paparazzi," "Our New England Legends" — and six documentaries/films.