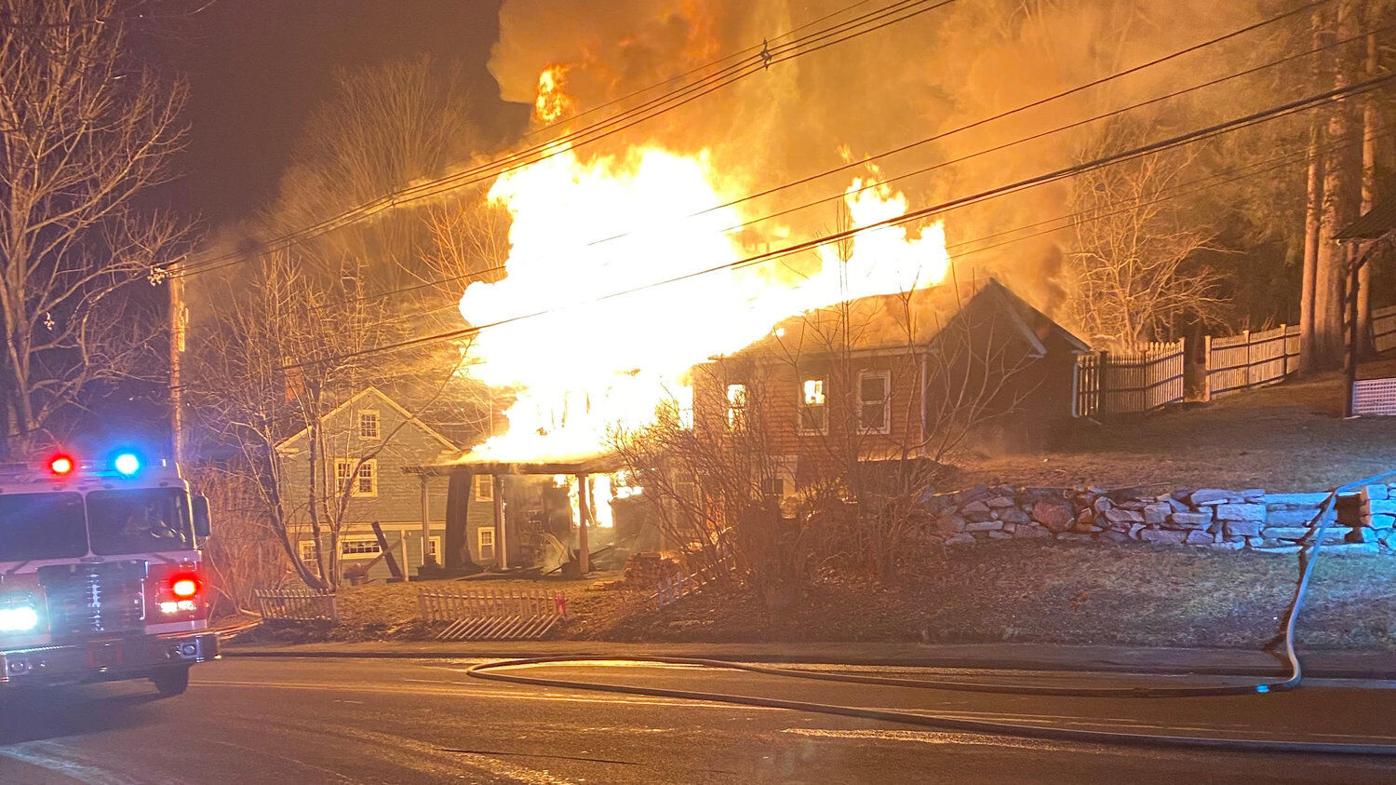 The West Stockbridge Fire Department's response to this Feb. 2 house fire on Stockbridge Road/Route 102 raised alarm with fire chiefs in nearby towns. This photo was taken by Richmond Fire Chief Steven Traver about an hour after the fire was reported. 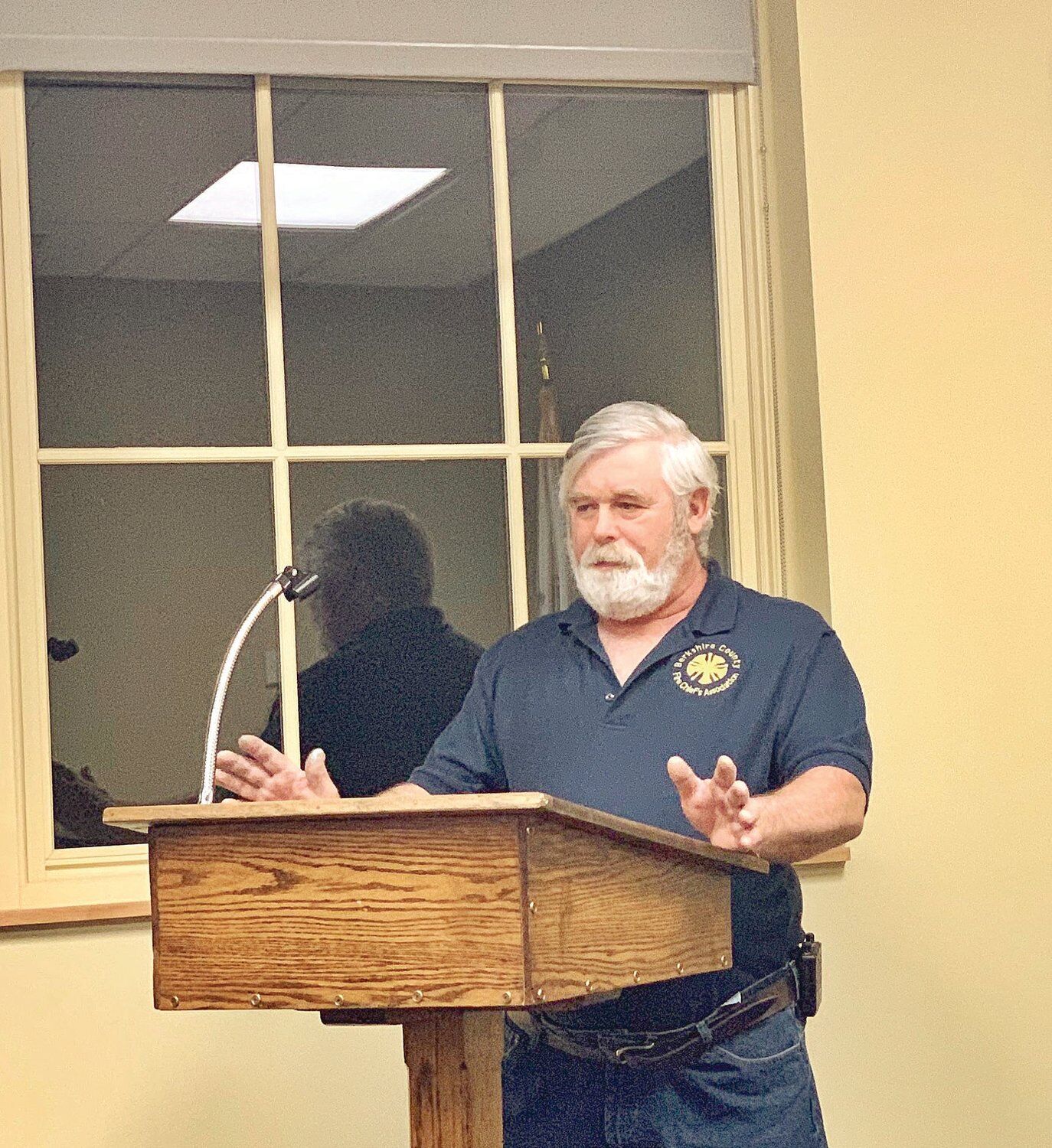 Peter Skorput defends his practices as West Stockbridge fire chief at Wednesday's Select Board meeting, before the board removed him from his post.

The West Stockbridge Fire Department's response to this Feb. 2 house fire on Stockbridge Road/Route 102 raised alarm with fire chiefs in nearby towns. This photo was taken by Richmond Fire Chief Steven Traver about an hour after the fire was reported.

Peter Skorput defends his practices as West Stockbridge fire chief at Wednesday's Select Board meeting, before the board removed him from his post.

WEST STOCKBRIDGE — A bungled response to a house fire last month and the ensuing alarm of fire chiefs from nearby towns are among the many reasons the Select Board on Wednesday night voted 2-0 to remove Fire Chief Peter Skorput from his post.

Richmond Fire Chief Steven Traver has replaced Skorput in the interim, and departments from surrounding towns will continue to respond to fire calls here when needed.

Officials said they have developed a plan to rebuild the volunteer department and increase its training budget. They also will pay for an independent review of the three most recent fires in town, as well as test the town's hydrants.

At a tense and, at times, raucous Select Board meeting, officials revealed that the department's response to a catastrophic house fire Feb. 2 was viewed by some surrounding fire chiefs as botched enough to pull Skorput's department off their list of those to call for mutual aid. Town Administrator Marie Ryan confirmed that other departments had removed West Stockbridge from their mutual aid cards. Those towns are Great Barrington, Lee and Richmond, said board member Eric Shimelonis.

"It's a devastating vote of no confidence," said Shimelonis, a former firefighter who, in 2018, resigned in frustration over department negligence.

Skorput, 62, denied that other chiefs had cut out the fire company, and he huffed from the meeting after the vote. His flock of volunteers followed.

Skorput's firing comes after a long string of missteps and mismanagement over the years that, officials say, could be dangerous and expose the town to lawsuits.

This is the second blow to hit Skorput this week. The State Ethics Commission slapped the 36-year firefighting veteran with a $5,000 fine after he avoided further proceedings by admitting to breaking conflict of interest laws that include retaliation against officials and others who made complaints.

But, the series of events at last month's blaze on Stockbridge Road/Route 102 was one scare too many. Shimelonis held up an enlarged photo of the engulfed home.

"There's something missing from this photo," Shimelonis said. "There is no water being put on this fire one hour into the incident."

One firefighter and the occupant were hospitalized for smoke inhalation, according to Shimelonis.

Previous board members also had wrestled with Skorput, said Curt Wilton, a former board member and current highway superintendent.

In 2016, the town paid a consultant $10,000 to study the department. The report cited numerous lapses, only some of which were fixed.

"It was a terrible condemnation," said Dan Buehler, who sits on the Finance Committee.

Officials and some residents suggested that the board had avoided firing Skorput through the years in order to keep peace and not shake his loyal troops of firefighters. There are currently 21 on the roster, including five who are probationary. And in a town of 1,300, there is comfort and benefit from the familiar.

"Peter would have known that my father was a diabetic," said Finance Committee member Kathleen Keresey.

But, other residents saw a lack of professionalism in Skorput chalking this up to a "personality battle" with Shimelonis.

"I'm actually quite frightened by this discussion." said resident Jeff Nestel-Patt. "The board has to lead here. It's the way the government is."

So, when Shimelonis doubled down on the problems, he was accused of ambition. Skorput still says that Shimelonis is behind an attempt to discredit him.

Yet, it was the Feb. 2 fire that rang the final alarm for Town Hall.

Shimelonis cited some reasons why. They include the choice of a water source, problems with hydrants, and the timing of calls to mutual aid. It all sparked Fallon's meeting last week in Great Barrington with two other chiefs.

Though Skorput said the department regularly tests the hydrants, and that these worries are "exaggerations," he defended his work. He said old, timber frame homes can burn like a "tinderbox," and pointed to the newer construction that quickly burned at a fire in Hillsdale, N.Y.

After Skorput and half the fire company left the meeting, residents worried about the way town officials had lined up Traver's appointment before Skorput was removed. They also worried about their homes. Traver arrived and reassured them that he also has mutual aid from four New York towns.

"I got dragged in," he said, noting that he was asked two weeks ago by the board if he could step in should Skorput leave. The Richmond board then approved this.

Resident Carol Kuller suggested that the shake-up was only possible because board members refused to be daunted by personal attacks linked to criticism of the Fire Department.

"Personal attacks make it hard for people to come forward," she said.

On Thursday, Shimelonis started a GoFundMe campaign for Skorput to help him pay the $5,000 fine from the state.