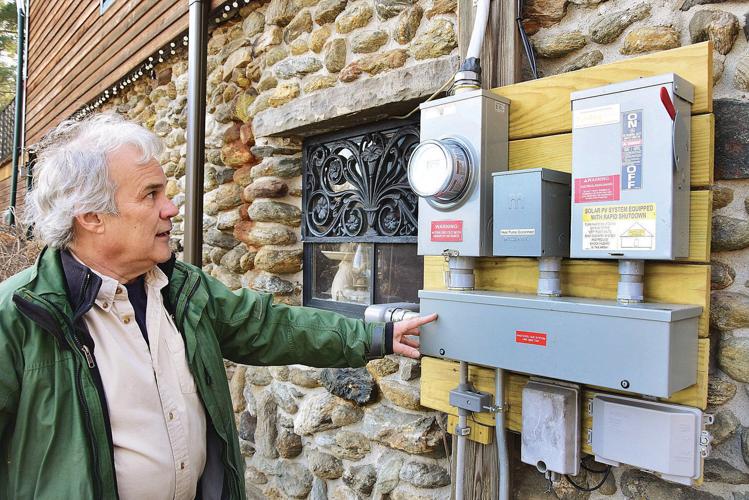 Nick Noyes explains the utility control panel that goes with the solar array installed on the roof of his Adams home. 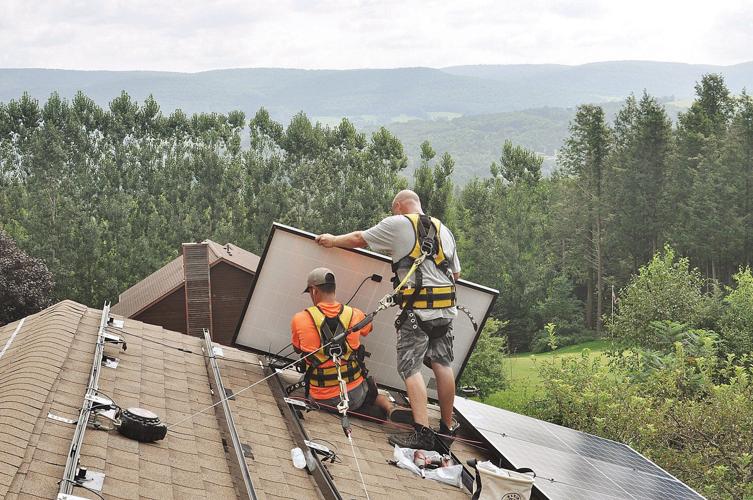 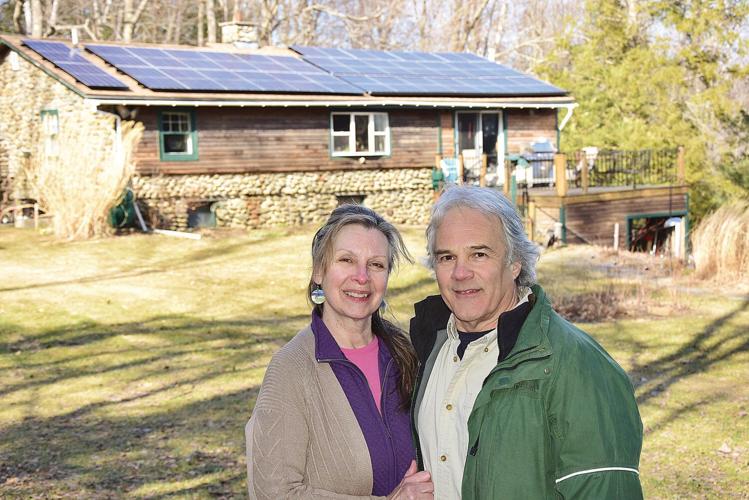 Donna Meczywor and Nick Noyes pose in front of the new solar array installed on the roof of their Adams home. The Center for Ecological Technology is helping local homeowners have their own solar array. Solar Access is a program paid for by the Massachusetts Clean Energy Center.

Nick Noyes explains the utility control panel that goes with the solar array installed on the roof of his Adams home.

Donna Meczywor and Nick Noyes pose in front of the new solar array installed on the roof of their Adams home. The Center for Ecological Technology is helping local homeowners have their own solar array. Solar Access is a program paid for by the Massachusetts Clean Energy Center.

ADAMS — Nick Noyes is all about lowering his electric bills and saving the planet.

For the 25 years that Noyes has lived in Adams, he has had his house thoroughly insulated and added weather stripping throughout the home. Recently, the Northern Berkshire native switched to energy-efficient LEDs, and sealed up all the cracks and gaps at the West Mountain Road residence he shares with his partner, Donna Meczywor.

In September, Noyes took the next logical energy-saving step and flipped the switch on his roof-mounted solar panels to drastically reduce, in just seven months, his electric bill from National Grid.

"It went from $100 to $120 a month to zero for the current bill, and I've accrued a month's worth of credits toward the next bill," he said. "It's an experience I've never had before with a utility bill."

"Protecting the environment is really important to me," he said.

Noyes owes his energy-saving success to being the first person to enroll in Solar Access. The year-old state-sponsored initiative is designed to make solar energy more affordable for middle- and low-income households, according to the Center for EcoTechnology in Pittsfield. Last spring, Massachusetts energy officials selected CET to run the statewide pilot program that has eight other solar arrays activated, including ones in Lanesborough and Williamstown. CET officials say another 14 single-family homeowners are awaiting installation of their solar panels and solar-powered heat pumps to lessen use of oil, natural gas and propane to heat a home.

In all, CET is aiming for 50 or more new solar arrays installed before the program ends by Jan. 1, CET President John Majercak told The Eagle.

Majercak said his agency primarily has focused on helping Central and Western Massachusetts residents be able to afford solar arrays and accompanying heat pumps to benefit from the federal/state solar tax credits. Through Solar Access, participants also save on startup costs through various rebates, a loan reduction after installation and a six-month break on the loan.

"We make the first six payments, so people can see the benefits of solar right away," Majercak said.

In all, income-eligible homeowners can end up paying $10,000 to $20,000 in upfront costs for installations priced at $30,000 to $40,000, said Majercak and Sarah Zazzaro-Williams, CET technical services manager.

"There's been very positive feedback on the incentives and making it a holistic program," Zazzaro-Williams said.

CET is partners with SunBug Solar of Somerville and Girard Heating & Air Conditioning from Westfield for the solar panel and heat pump installation, respectively.

The program requires both to be installed, because the solar panels will be able to provide energy for heating and cooling, thus saving money that can then be used toward the solar panels, resulting in a net-positive cash flow for the homeowner, CET officials said.

Majercak said the heat pump doesn't replace an existing heating system, but rather it's activated to warm the most-used rooms in the house when cranking up the furnace isn't necessary to heat the entire house.

From initial contact with CET to installation, Zazzaro-Williams said the process takes, on average, six months, so the push is on to reach more homeowners before the program wraps up at year's end.

With CET's help, Noyes said Solar Access is worth the time and money invested.

"I had a couple of glitches along the way, but [CET] listened and the contractor responded to my concerns," he said. "It's been a real game changer."