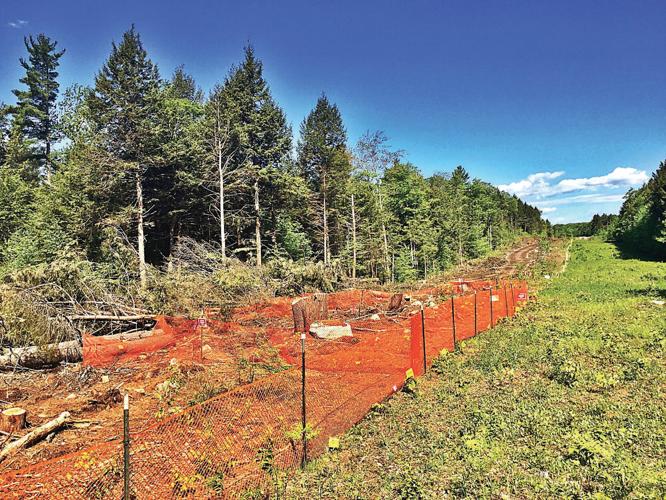 Work has been shut down on a portion of the Tennessee Gas Pipeline Co. project in Otis State Forest after an environmental inspector discovered a wildlife species that requires quiet. 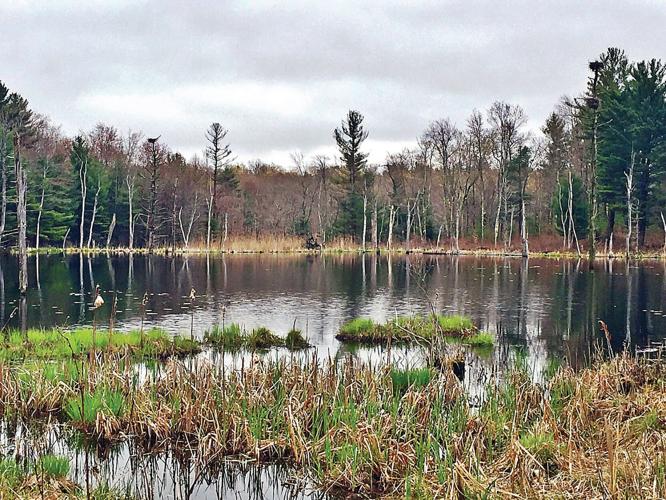 Environmentalists and residents have been concerned that this great blue heron rookery in Otis State Forest might be disturbed by pipeline work about 600 feet away. So far, the work seems to have had no impact.

Work has been shut down on a portion of the Tennessee Gas Pipeline Co. project in Otis State Forest after an environmental inspector discovered a wildlife species that requires quiet.

Environmentalists and residents have been concerned that this great blue heron rookery in Otis State Forest might be disturbed by pipeline work about 600 feet away. So far, the work seems to have had no impact.

SANDISFIELD — The man looked around a bit in a pile of felled trees, put up his hand, and the equipment stopped.

This is how Cathy Kristofferson described what one of Tennessee Gas Pipeline Co.'s environmental inspectors did late last month when he found what appears to be protected wildlife — and possibly a nest — that needs quiet.

"He wouldn't talk to us," said Kristofferson, of Massachusetts PipeLine Awareness Network. "We tried to speak to him when he walked by the [area] and he did a `speak to the hand.' "

Workers stopped work, and machines disappeared. Now tree removal and chipping equipment can only be seen and heard in the distance down a good stretch of this roughly 2-mile pipeline corridor where the Kinder Morgan subsidiary is adding a third line, a natural gas storage loop.

This "sensitive area" was cordoned off with orange fencing, where trees are lying in piles and can't be moved until the inspector says its OK.

Among a host of concerns and controversies — and arrests — over the Otis State Forest part of the company's 13-mile, tri-state Connecticut Expansion Project, worries about the threat to wildlife receded a bit upon learning the great blue heron rookery down the road appears to have been spared disruption, despite the shattering sounds of pipeline work close by.

But this latest species — found next to private property where a cabin to protest the pipeline was built last month — is a mystery, even to the Sandisfield Conservation Commission.

Commission Chairman Paul Gaudette said he didn't know what wildlife was found, but he said: "by federal law [the inspector] had to stop the work, and he's the one person who can stop things."

Gaudette said Tennessee Gas has hired multiple environmental inspectors from AECOM, a multi-national engineering firm providing expertise on everything from hotel design to the petrochemical industry. He said a biologist and a wetlands specialist are working at the project site.

And David Simmons, the endangered species supervisor for U.S. Fish and Wildlife in New England, didn't know, either.

But Simmons also said his agency, which gave initial approvals and consultations, isn't directly involved in the project anymore.

Simmons said he could only speculate on what the inspector might have found and why he would stake a "sensitive area — quiet zone" sign next to the habitat.

"It's intended to minimize the effects on behavior, the interruption to communication," Simmons said, noting that a nest with young was a real possibility.

Simmons said if this were the case, the inspector would allow work to restart once the young have fledged.

As for not divulging what species was found, Simmons said this is a practice to keep people from taking animals.

"On occasion, Fish and Wildlife will partner with state counterparts [to protect a species], and will be vague about those species to try to discourage collectors. It does definitely happen with reptiles — they're popular with collectors."

In the gas company's 2014 environmental report, AECOM said the impact on reptiles, amphibians, birds and mammals in the area — including the white-tailed deer, Eastern coyote and bobcat — would be temporary and insignificant.

"To the extent practicable, feasible and legally permissible, Tennessee has routed the pipeline loops to follow existing utility [right of way] and thus follow existing forest edges, thereby minimizing the acreage of forest lands crossed and the relatively greater impacts that would be associated with clearing an entirely new [right of way] through a contiguously forested area," the report said.

The study also ruled out the presence of state-protected species or special habitats in or close to the pipeline corridor.

But in the same report, the company said New England Fish and Wildlife had said there were two federally listed threatened or endangered species "known to occur in the project area," the New England cottontail rabbit and the northern long-eared bat. The company consulted with the agency to lessen the impact to the rabbits, and the agency recommended that trees not be cleared between April 1 and Sept. 30 to protect roosting bats.

Tennessee Gas said it "has committed to winter tree clearing to prevent impacts to bat species," but that changed, possibly with a change between 2014 to 2016 to the status of the bats, Simmons said.

This change included a rule that would allow "certain activities within certain parameters" if a project were underway near roosting bats, but with no time-of-year restrictions for tree cutting.

Simmons had previously told The Eagle that while it recommends cutting outside of breeding season, the agency leaves that decision up to the company.

But Simmons said his agency only consults with the Federal Energy Regulatory Commission. He said FERC includes compliance with the Endangered Species Act as part of the pipeline approval process.

"We would re-consult with FERC if the project changed in some way that affected listed species," he added.

While those great blue herons are not listed, they are protected by the Migratory Bird Treaty of 1918. Yet under that law there are no time-of-year cutting restrictions, and this worried environmentalists, who thought the birds might abandon their nests.

But so far so good.

"As far as we can see they're doing fine," said Kristofferson, who is monitoring the rookery. "One of the nests has three young standing up, and I've seen at least one head in each nest. There is one that has three young. That's a busy mom."