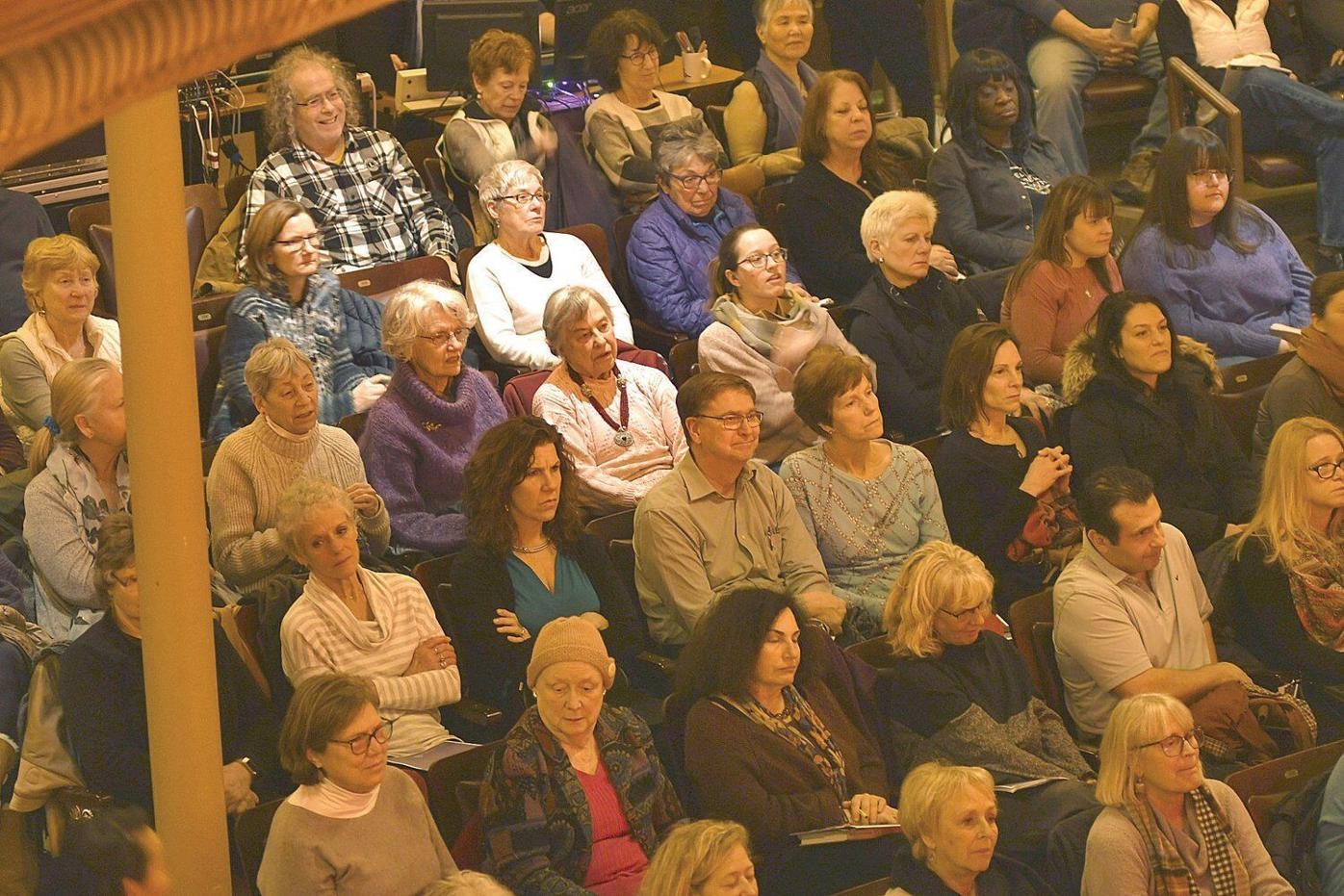 People listen to author and award-winning journalist Rachel Louise Snyder speak at the Colonial Theater on Thursday. She penned the book "No Visible Bruises: What We Don't Know About Domestic Violence Can Kill Us." The presentation was part of the Berkshire Domestic and Sexual Violence Task Force's "One Book, One Community" project. 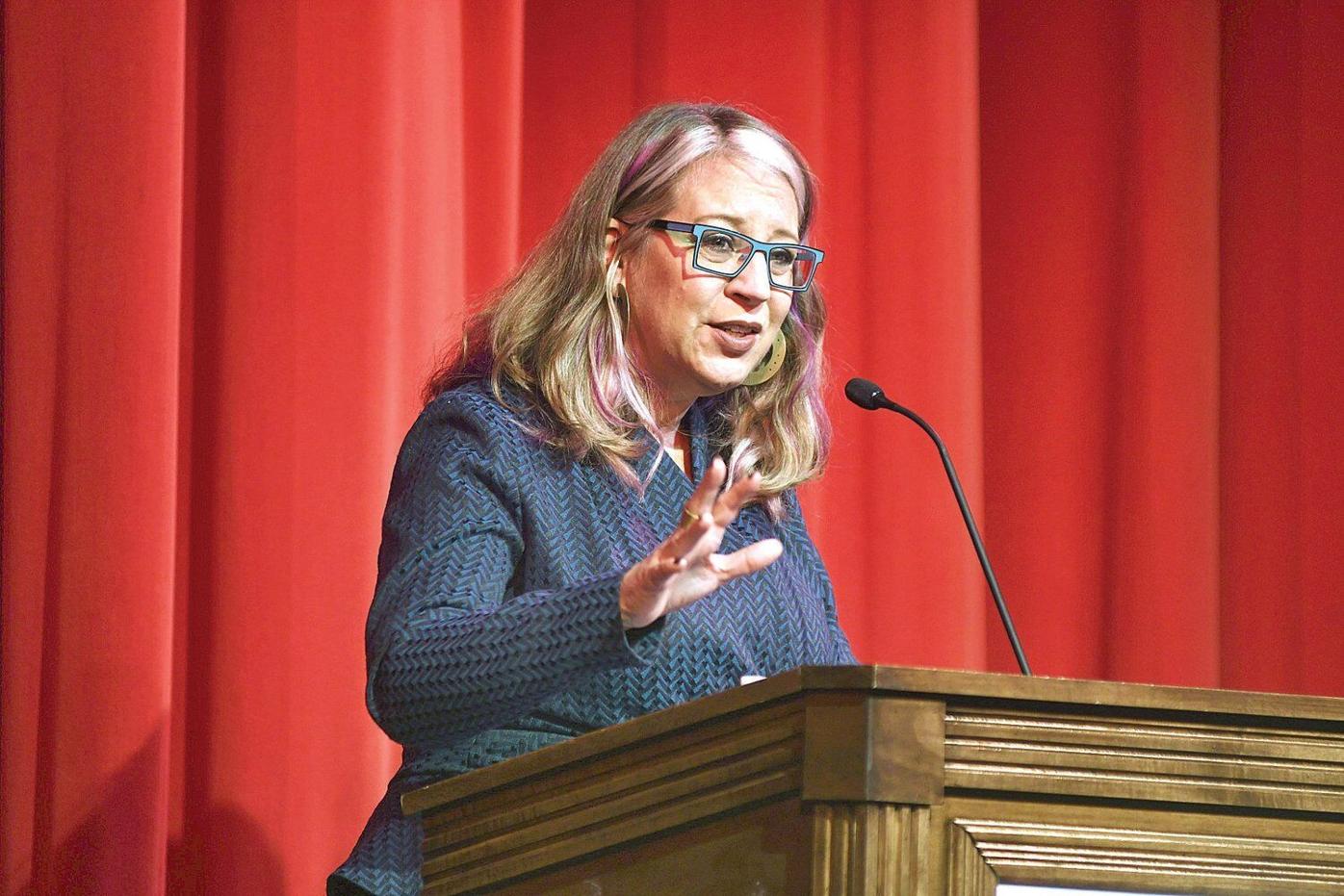 Author and award-winning journalist Rachel Louise Snyder speaks at the Colonial Theater on Thursday. She penned the book "No Visible Bruises: What We Don't Know About Domestic Violence Can Kill Us." The presentation was part of the Berkshire Domestic and Sexual Violence Task Force's "One Book, One Community" project.

People listen to author and award-winning journalist Rachel Louise Snyder speak at the Colonial Theater on Thursday. She penned the book "No Visible Bruises: What We Don't Know About Domestic Violence Can Kill Us." The presentation was part of the Berkshire Domestic and Sexual Violence Task Force's "One Book, One Community" project.

Author and award-winning journalist Rachel Louise Snyder speaks at the Colonial Theater on Thursday. She penned the book "No Visible Bruises: What We Don't Know About Domestic Violence Can Kill Us." The presentation was part of the Berkshire Domestic and Sexual Violence Task Force's "One Book, One Community" project.

PITTSFIELD — Only fifteen percent of strangulation injuries are visible.

Yet this is a common form of violence on the domestic front. Nearly 100 percent of the perpetrators of this are men, and more than half of domestic violence victims have been strangled, according to research cited by Rachel Louise Snyder in her book. "No Visible Bruises: What We Don't Know About Domestic Violence Can Kill Us."

Hosted by Berkshire District Attorney Andrea Harrington's Domestic and Sexual Violence Task Force, Snyder spoke to a packed Colonial Theater on Thursday night to speak about the book that is now a primer for how to cut domestic abuse off at each punch, kick or threat. The stories are of missed opportunities to collect evidence and protect victims who were later killed by a husband and father.

The doctors who don't speak up. Cops who don't know what to do. Laws that don't measure up.

There was a district attorney in Montana who didn't do evidence-based work.

"She does none of those things and Michelle ends up dead," Snyder said, during her haunting narrative that is packed with the escalation of plot twists and foreshadowing she learned as a fiction student. Snyder said the "series of cause and effect" is what happens in domestic violence.

Strangulation is just one strong marker for catching what can be elusive, and prevent the law from intervening.

But there are others, and they can remain toothless throughout the social web, perpetuated by an inertia, or a patriarchy still ruling the collective roost. The reasons are layered.

"There were gaps in all the systems," Snyder said of every person and agency that failed Michelle, whose murder, in part, resulted in a change of laws in Montana, and the development of a system designed to spot the high risk situation.

And this is why Harrington, who vowed during her campaign that "women's pain would matter" to her administration, is now adding a new domestic violence high-risk team trained in evidence-based prosecution —the last county in the state to do this for what she says is a public health crisis.

Her office has also performed a domestic violence fatality review to dissect earlier cases and learn form them.

The handout Thursday night included a "Danger Assessment Tool" and "Strangulation Worksheet" for police and other agencies. Both are hair-raising.

And signs and symptoms strangulation that might not show up as bruises: "Urinated," "Vision Changes," "Hearing changes." There are also the delayed consequences like hematomas, vocal cord immobility, stroke or even delayed death from carotid dissection.

Snyder, a journalist and assistant professor at American University, praised Harrington's strategy and commitment to doing something about it.

"She knows what system she's in," Snyder said.

Other systems also need to fall in line, Snyder said, to contain a violence that reverberates far and wide.

Mass shootings are connected. She cites 2017 data from the group Everytown for Gun Safety indicating that 54 percent of these involved domestic or family violence. Snyder says the Newtown, Conn. school shooting and the Orlando, Fla. nightclub slayings began with the slaughter of wives and mothers.

She quotes Eve Ensler, the feminist and playwright who wrote The Vagina Monologues.

An audience member said she knew all too well about domestic violence, which lashed through her family — her brother was killed by a wife and hired man. They wanted his money.

"I don't know how to smooth over the wrinkles in my life," she said.

Those on the front lines in the Berkshires were there in force. Some say the abuse can be subtle.

"We see it all the time in all different ways," said Julia Jarvis, a senior nutritionist at Community Health Programs in Great Barrington.

Mary Feuer, assistant director of the Women, Infant and Children's program at CHP explained. "Emotionally, financially. Dad's working - mom's not. He controls what they buy. He says they `can't afford it.'"

"It" being things like feminine hygiene products, diapers, toothpaste.

"And lots of threats, like taking the kids," Jarvis said. "Sexual violence is huge, too."

Isabella Deluca is a sex worker who is on the task force's Sex Trafficking Subcommittee. She was handing out information about Team Clear Heels413, a collective of exotic dancers working to connect for support and networking. Sex workers are particularly at risk, she said, given their marginalization.

"I'm here so that we don't forget about sex workers," she said. "Doing the this job does not mean you can be assaulted."

Harrington said later that she wants to make sure her office and the task force is reaching into all communities.

"We are not looking to try to prosecute people who are sex workers, we are looking to protect them," she said.

She also noted her office's successful prosecution in human trafficking cases, and that this is another area of focus.

When asked how the office can reach into those households where the abusers are unknown to police and never move through the courts, Harrington said that her office wants to educate residents to spot what could be a silent situation.

"Part of the goal of the task force is so that more people understand the signs and can recognize them and direct people to help," she said.

Heather Bellow can be reached at hbellow@berkshireeagle.com or on Twitter @BE_hbellow and 413-32-6871.