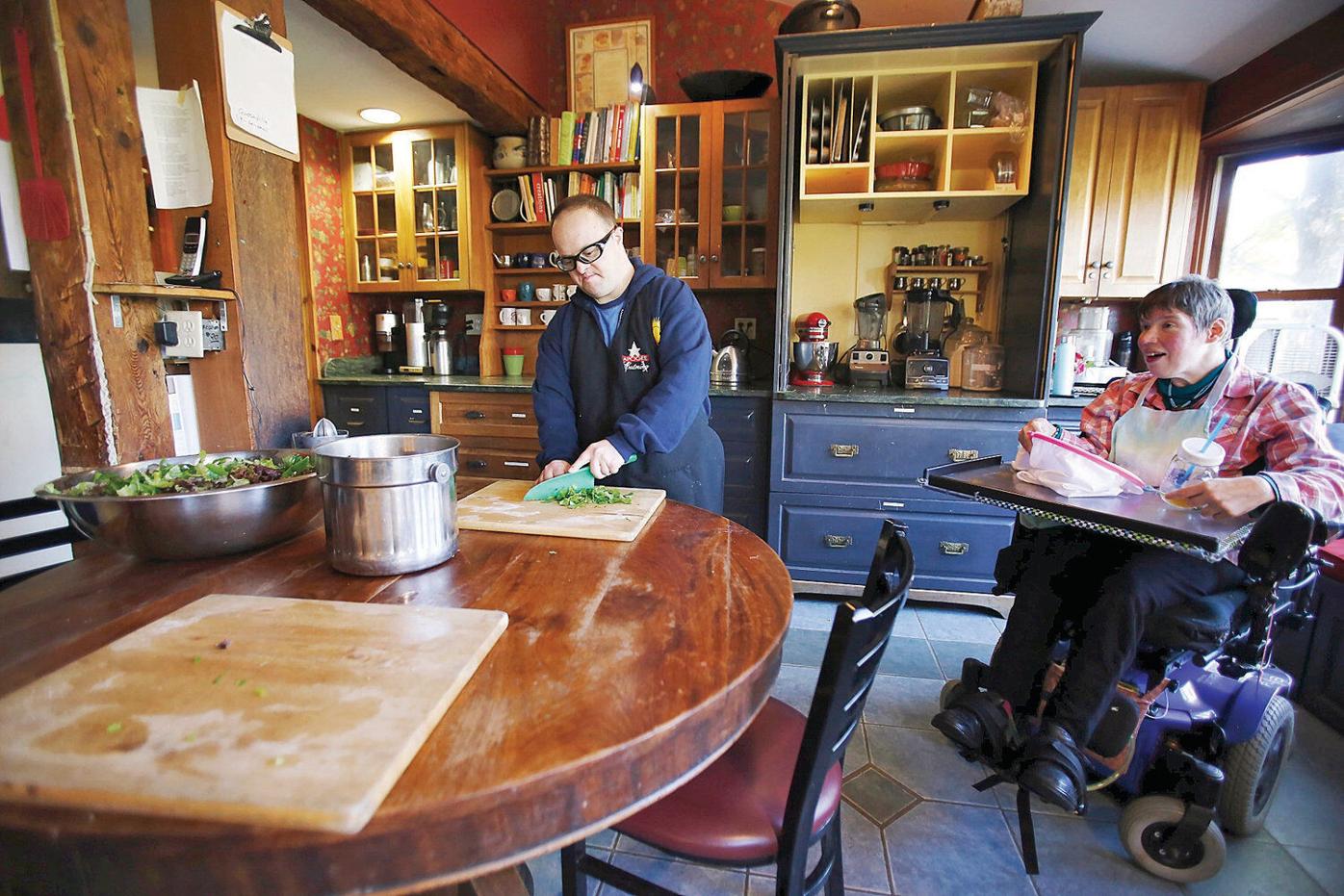 Matthew and Cathy finish helping to prepare lunch in the kitchen at Stanton Home in Great Barrington. They are among the 16 people with special needs, ages 21 and older, who make up Stanton Home, a day program and residential community with six homes. 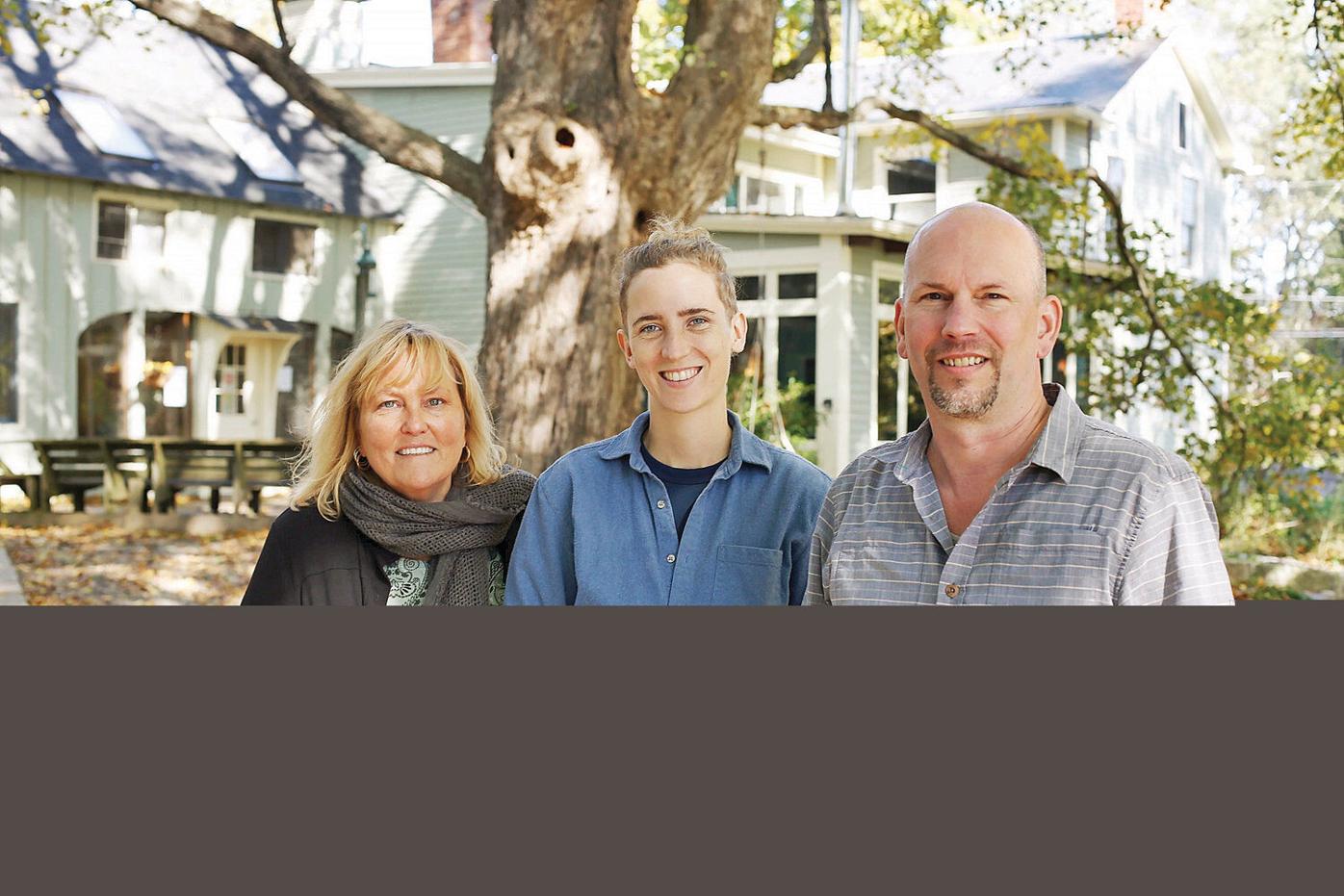 From left: Assistant Director and Case Manager Pam Macy-Williamson, Program Coordinator Kendra Smallwood and Executive Director Peter Stanton at Stanton Home in Great Barrington. In the six years since Stanton took over, Stanton Home grew to employ 53 full- and part-time staff who live in the residences and oversee a robust operation on North Plain Road that includes organic gardens, greenhouses and a weavery.

Matthew and Cathy finish helping to prepare lunch in the kitchen at Stanton Home in Great Barrington. They are among the 16 people with special needs, ages 21 and older, who make up Stanton Home, a day program and residential community with six homes.

From left: Assistant Director and Case Manager Pam Macy-Williamson, Program Coordinator Kendra Smallwood and Executive Director Peter Stanton at Stanton Home in Great Barrington. In the six years since Stanton took over, Stanton Home grew to employ 53 full- and part-time staff who live in the residences and oversee a robust operation on North Plain Road that includes organic gardens, greenhouses and a weavery.

GREAT BARRINGTON — Allegra is weeding the garden when she is hit with an attack of the giggles — and it's a contagious one.

Now, everyone is laughing. And Allegra giggles so much that she barely can speak. But she finally explains how much she loves harvesting vegetables, and her love of music, avocados, dancing and singing. She sometimes performs at open-mic night at The Egremont Barn. And she wants to do more.

"I want to learn how to tap dance," she says.

Allegra, 24, is one of 16 people with special needs, ages 21 and older, who make up Stanton Home, a day program and residential community with six homes.

In 1986, Andrea and Nick Stanton moved to this North Plain Road/Route 41 farmhouse from a Camphill therapeutic intentional community in Pennsylvania. They came here with a "lifesharing" philosophy that eventually would grow into Stanton Home as more people with disabilities came to live with them. The couple's son, Peter Stanton, took over as executive director in 2012; Nick Stanton died in May.

What began at that farmhouse as lifesharing quickly has grown with the upswing in young people who want to live in smaller, familylike home atmospheres rather than in larger group homes. The state now oversees a total of 91 people with disabilities in Berkshire County living in what it terms "shared living" homes.

Stanton Home has expanded in the past several years to four more homes in South Berkshire County, and two that are in Canaan, Conn.

In the six years since Peter Stanton took over, Stanton Home grew to employ 53 full- and part-time staff who live in the residences and oversee a robust operation on North Plain Road that includes organic gardens, greenhouses and a weavery. The main house is now home to the company's offices and day program for residents.

Stanton says the nonprofit group, whose residents are funded by the state, now is able to reach more people with its mission to provide a loving lifetime commitment to each person who lives in the homes.

"It can be their home for life, if they so choose," Stanton says, noting that the oldest resident, John, now 61, had moved here with the Stantons in 1986.

"John has been here more than half of his life," says Pam Macy-Williamson, assistant director and case manager.

John was here when the lifesharing model was somewhat different. It was a way of life in which people with special needs lived with a family who cared for them. There were no "employees."

"My parents did it as volunteers," Stanton says. "That creates a completely different relationship to the work, [where] everyone is here just doing life. That was the [lifesharing] model. It was never about clocking hours."

But the new model of having paid employees who are practicing the lifesharing philosophy is necessary for what Stanton says is a growing need to serve more people in different homes and to oversee it all.

"We're getting inquiries all the time," he says. "A couple of years ago, there weren't any empty beds in the county, so there was a real shortage, and every year there are people graduating from high school who need homes."

Three people and one to three staff members live in each home, depending on a person's needs. These are places where, staff say, dignity and self-determination reign as the standard. People spend their days learning skills, doing meaningful work and having fun.

"They decide what they really want to do," says program coordinator Kendra Smallwood.

Some people are off horseback riding at Blue Rider Stables. Others are swimming at the Community Center. At the day program farmhouse, where a small bridge spans a brook on the path to the front door, some are getting garlic ready to plant, or making up meal menus from whatever comes out of the garden. Some are out grocery shopping, while others have just set the table and are working in the kitchen.

Cathy, 49, is embroidering, making a butterfly, while Matthew, 37, is chopping parsley for a salad. He is a passionate cook, and declared that he is known for his masterful way with tomatoes and potatoes.

"I am famous," he says, and then explains why it is that his cooking sings.

"It's because I'm nice to other people."

Cybele, 23, comes in. She lives with Smallwood at the South Egremont home called Falcon View. All smiles, she says she loves animals, particularly house dogs Tilly and Baba.

In another room are boxes full of peppers and squash harvested from the garden. MaryAnn Martinez is there helping Caroline, 22, and Sami, 30, with the garlic.

Martinez says the menu rotates, depending on what vegetables are available, and all is supplemented with meat from farms including North Plain Farm, started by Stanton's brother, Sean Stanton; last year, the farm moved up the road from this location.

Organic gardening is the core of of this program. It's joyful, meaningful work and looked on as a way to keep everyone healthy, Stanton says.

It's also economical. Standing on farmland that was previously home to his brother's pigs, Stanton says the entire operation has a $20,000 annual food budget — a reason why Stanton Home plans to grow more food for the program and to raise money by selling to the public, since the nonprofit group also relies on donations. The goal is to grow all the food for the main house lunches and the homes.

Mushrooms are next. Stanton points to piles of logs for growing them, something he says will create paid work, which some residents want.

And all this blossoms out of the idea of lifesharing, which germinated largely from within the Camphill villages around the world; Stanton Home carries some of the structure and rituals of those intentional communities, Stanton says. Lifesharing, he says, is different in that it places people out in the larger community.

It's about more than attending to a resident's needs — the work is a calling, and the ideal is that staff and residents are living life together in mutual support and recognition, in the same spirit of what Peter Stanton's parents began.

"We're partnering with all these individuals in living healthy, engaged and fulfilling lives," Smallwood says.