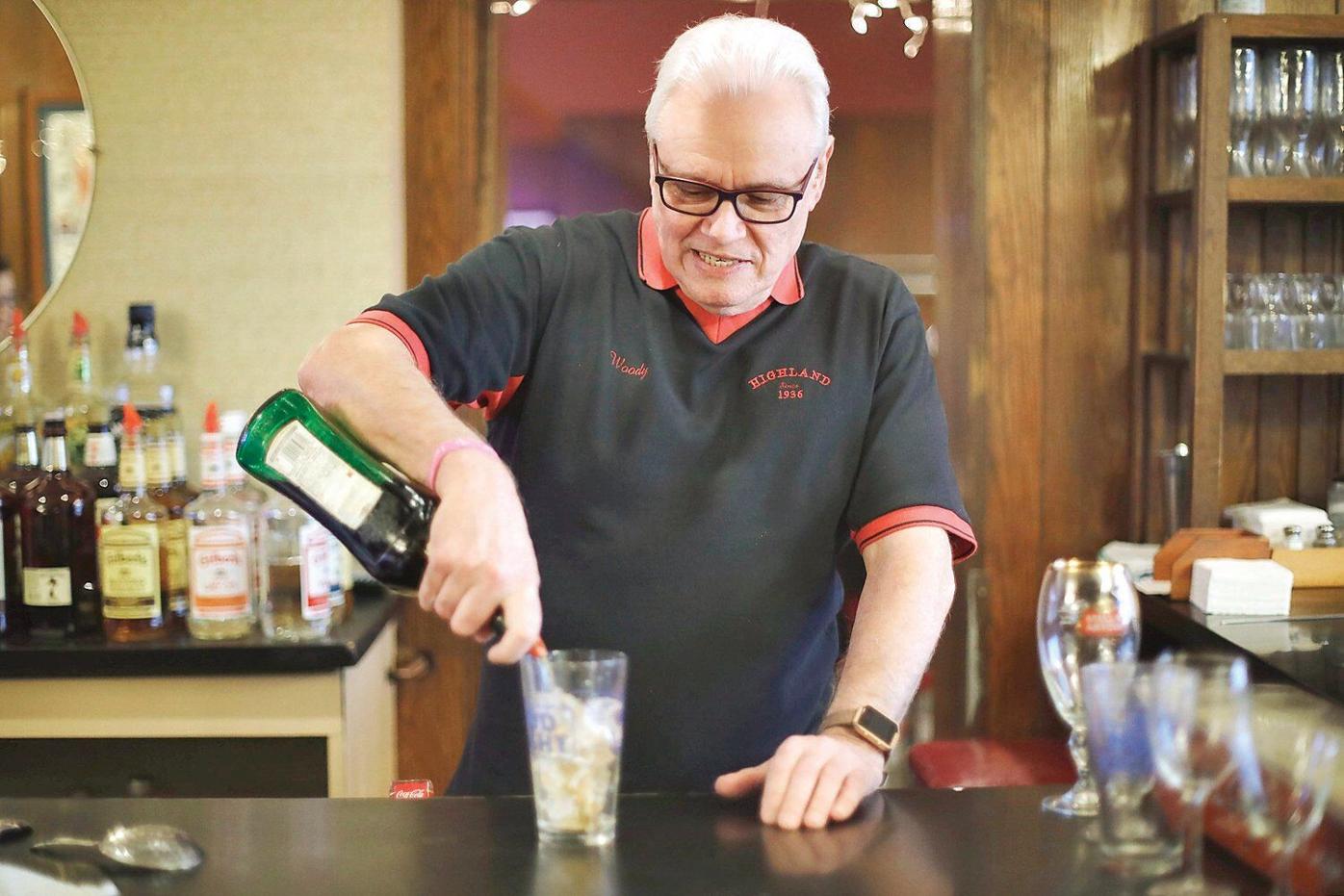 Richard Wood has been tending bars around the county going on 47 years now. 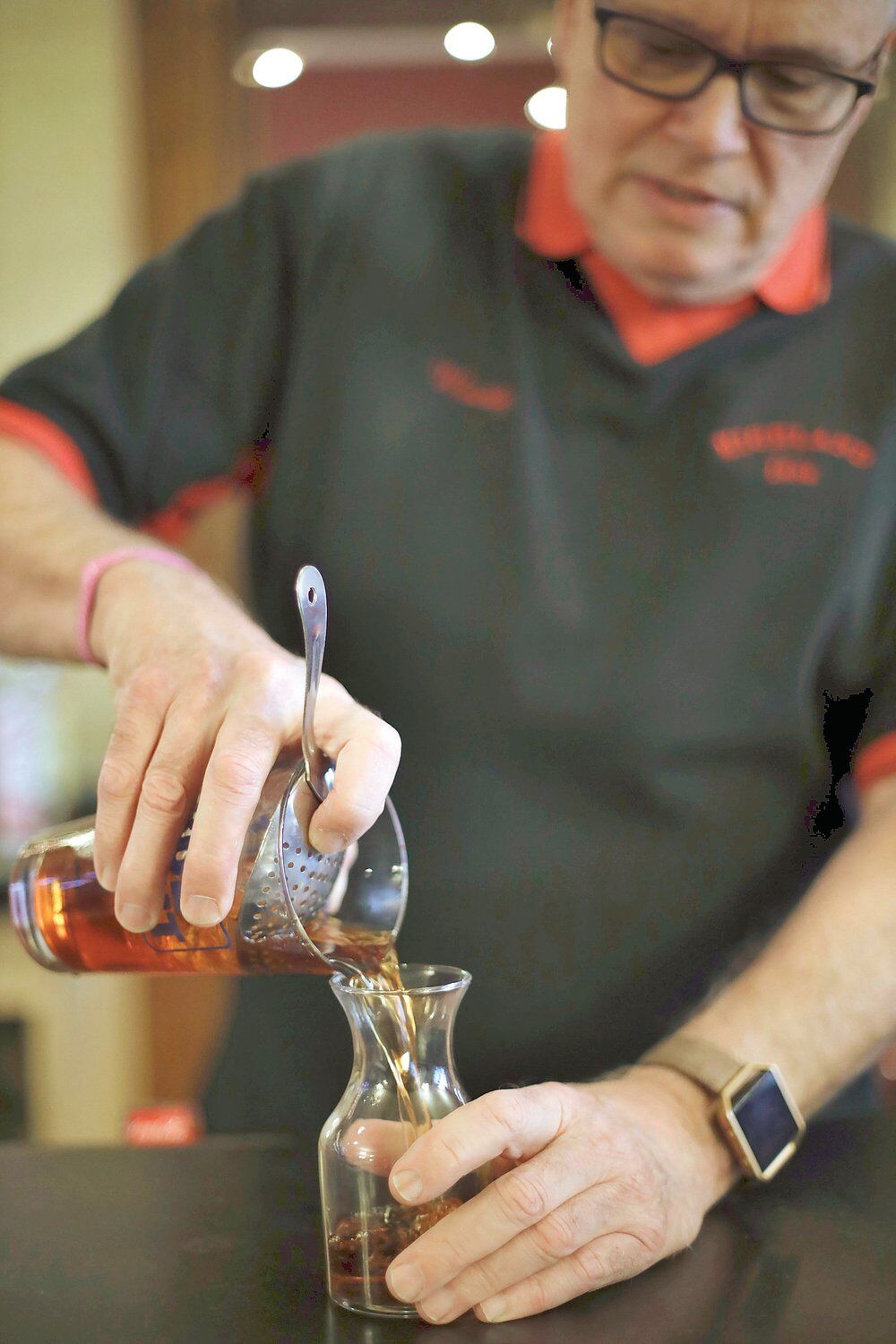 Richard Wood pours a Manhattan, one of the The Highland's most popular drinks, which he traditionally makes with a splash of cherry juice. 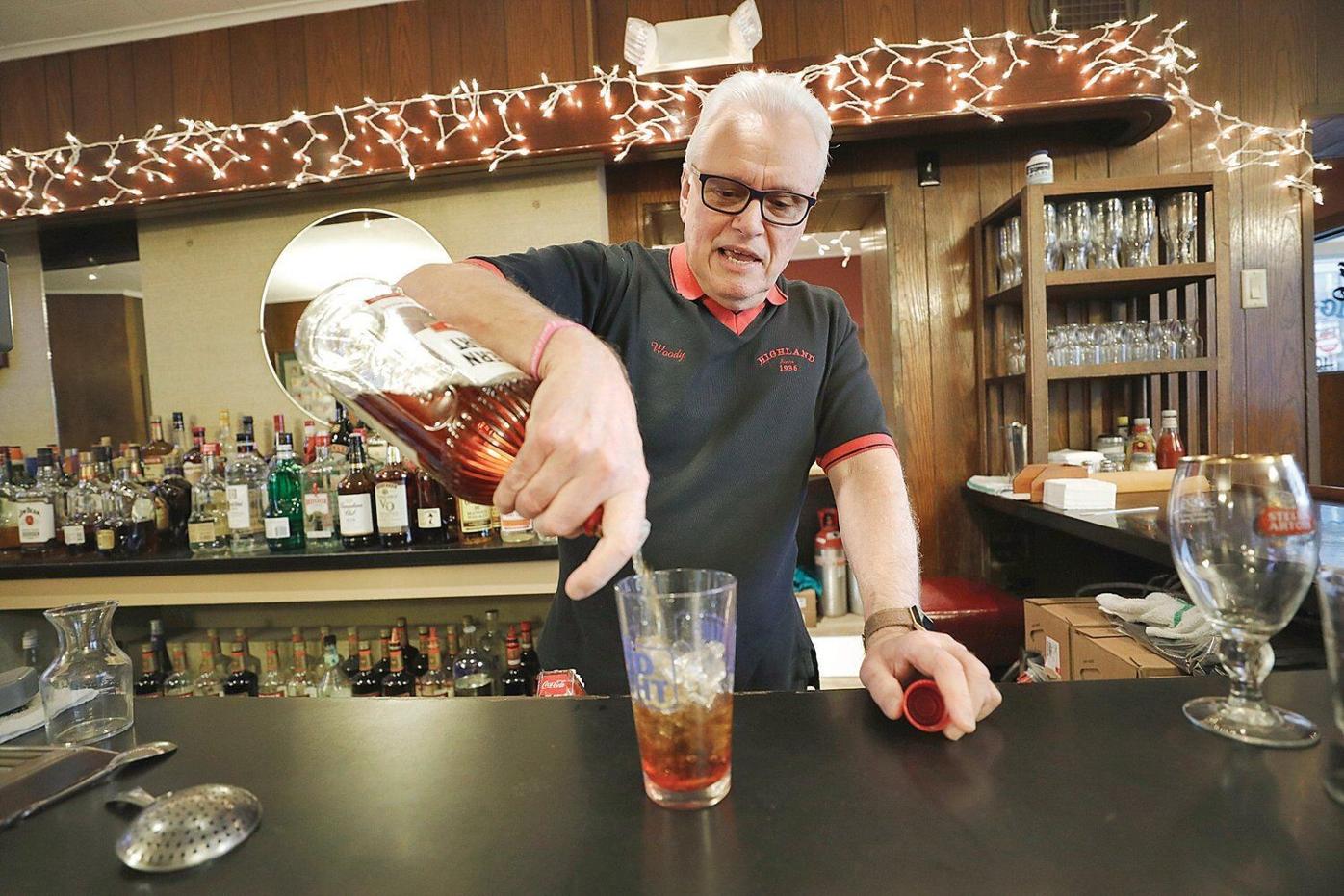 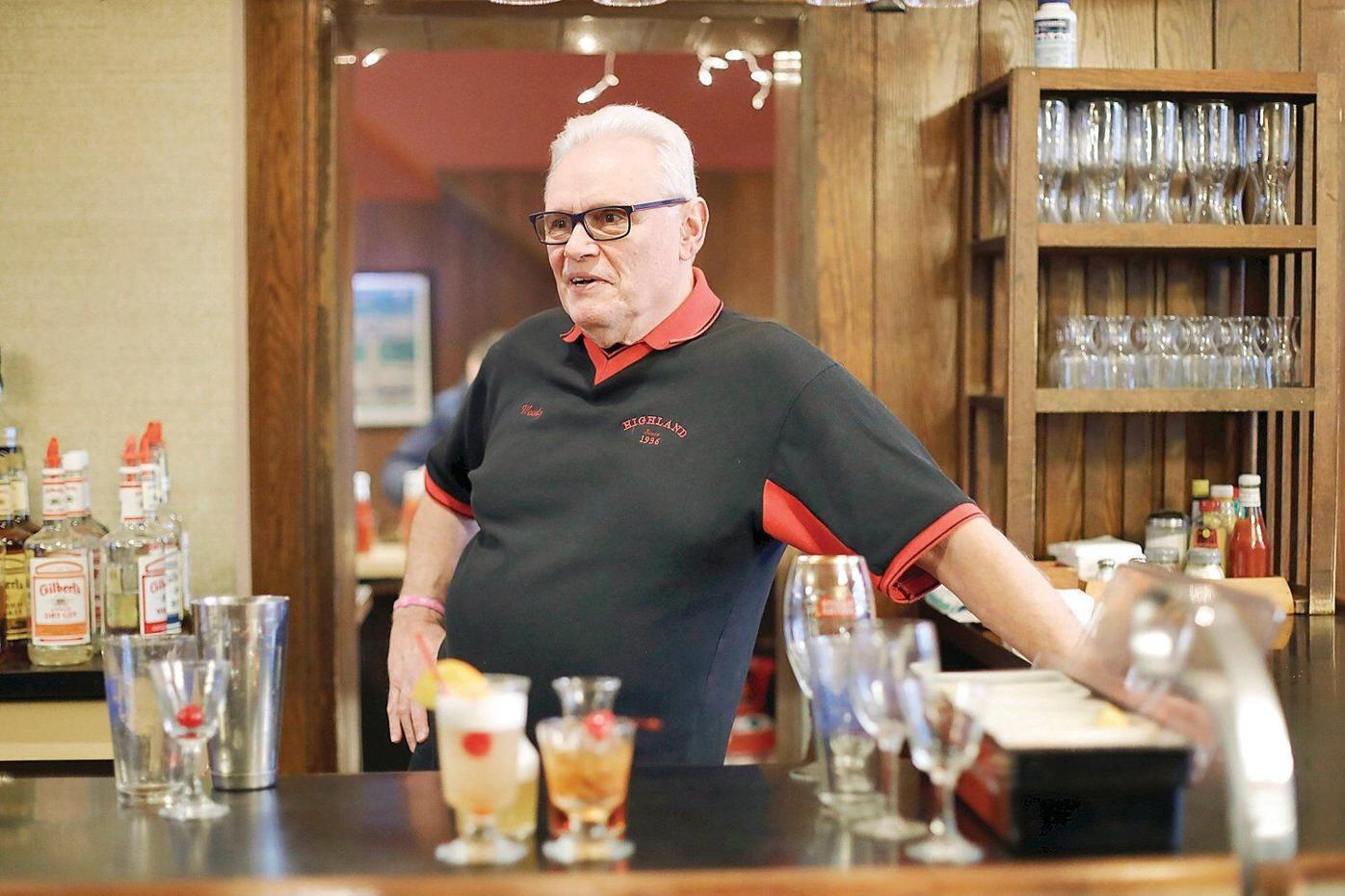 Bartender Richard Wood said Manhattans and whisky sours are among The Highland's most popular drinks at the Pittsfield bar where he has been a bartender since 1994. 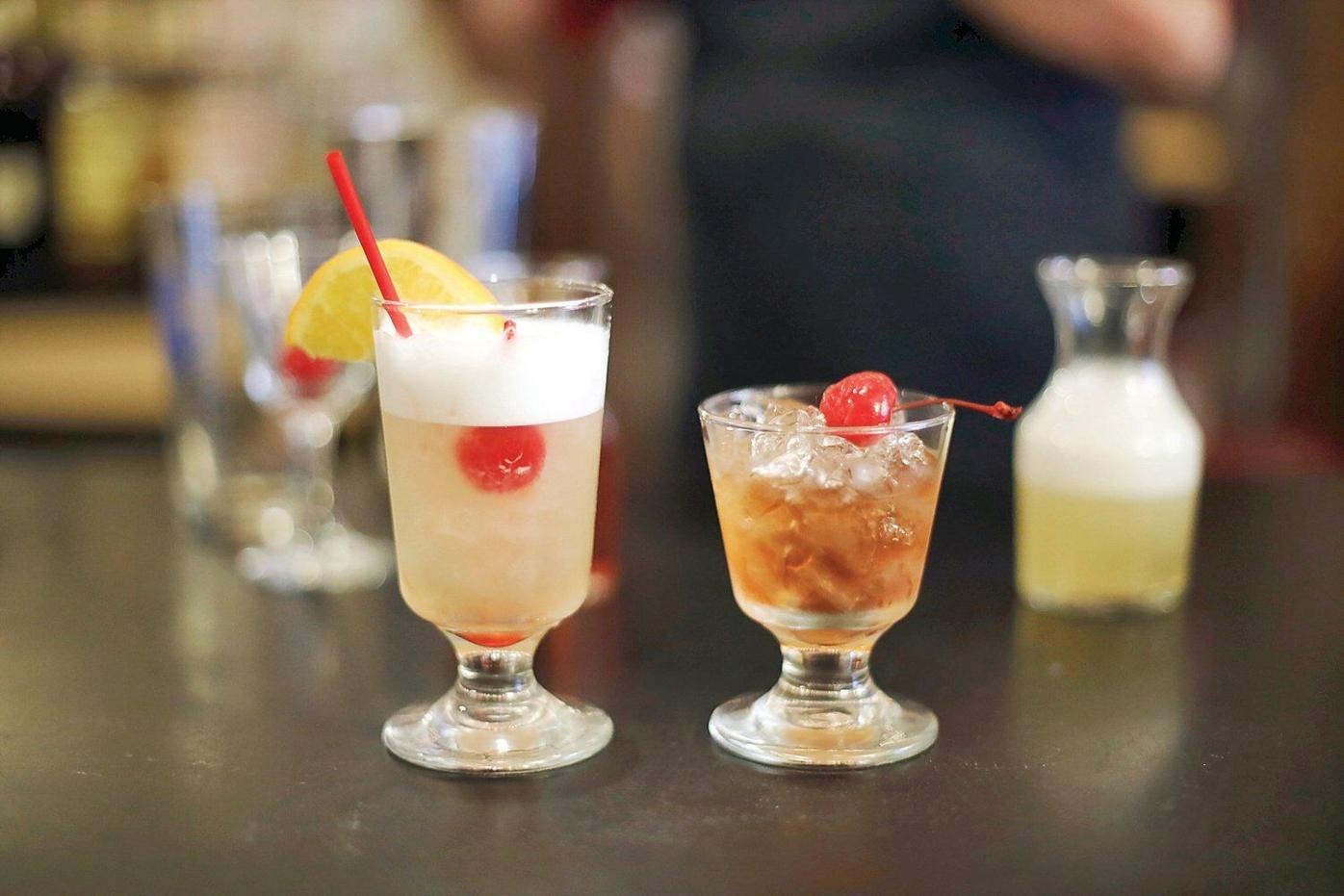 "If I had a nickel for every martini I made, or Manhattan or Brandy Alexander, I'd probably be a millionaire today," Wood said.

Richard Wood has been tending bars around the county going on 47 years now.

Richard Wood pours a Manhattan, one of the The Highland's most popular drinks, which he traditionally makes with a splash of cherry juice.

Bartender Richard Wood said Manhattans and whisky sours are among The Highland's most popular drinks at the Pittsfield bar where he has been a bartender since 1994.

"If I had a nickel for every martini I made, or Manhattan or Brandy Alexander, I'd probably be a millionaire today," Wood said.

PITTSFIELD — Bartender Richard Wood has been serving Manhattans and martinis at The Highland Restaurant on Fenn Street for so long, he's now pouring drinks for "kids" he knew as well, kids.

"We get so many families," said Wood, who is best known as Woody around the bar he's tended since 1994. "I get to watch children who were that high [gestures below his waist] slowly grow until they come up to me and say 'I'll have a beer' and I think, 'No way they're 21.' And they are!"

Woody, who has lived in Pittsfield for all his "66-plus" years, like The Highland and its popular never-go-out-of-style drink menu, is a staple in the community. His resume of past bartending gigs reads like county history lesson in hospitality: Tahiti Take Out Restaurant & Lounge, Seven Hills Inn, V's Doghouse, Oak N' Spruce and many private parties. But The Highland has been his longest tenure.

The bar wraps in a U-shape with a divider down the middle. His wife, Linda, often mans the counter on the other side.

"Way back in the old days, before you were born," he said, reassuringly, to this reporter, "the women weren't allowed in the bar area. The men drank in here and the woman sat over there, to some extent." That, of course, has changed, but Woody said there isn't much else that has changed about the establishment.

"That's what I love about it," he said of The Highland. "It's like walking back in time, nothing has changed since 1936 [when it opened], certainly not in the time I've been here. I think we were the last place in the city to get a credit card machine; we had a dial-up phone and used to call in our orders by microphone. We do not have digital dining, by any means; we write everything down now. It's kind of what makes it homey feeling; you're not just a number here."

While he admits he's not a name person, Woody said he will mostly likely remember what your dinner and drink order was last time you stopped by. "You have to come in a few times for me to get the name down," he said.

Standing behind the black-topped bar as busy waitresses put in orders from booth patrons, the long-time bartender wears a Highland shirt that says, "Woody," which echoes the tattoo of Woody Woodpecker on his upper arm, and a pink bracelet in support of his daughter-in-law. Woody explains that she is currently fighting breast cancer. It's easy to see how much he worries for her and his son's family, so when a patron asks how she is doing, he said, it "chokes him up."

"It brings tears to my eyes," he said, becoming visibly emotional. "This community — ya, you hear about the few bad apples — but by far, there's so many good ones."

Woody is quick to praise his bosses — The Highland is owned by three brothers Pasquale, Gerardo and Dario Arace — and the familial atmosphere and legacy they've continued to provide the community. For him, working there isn't a job.

Q What's the most popular drink order you get here?

A By far, the martinis and Manhattans. They are a lost art — nobody knows how to make them anymore. Also, the old-fashion drinks: Brandy Alexanders, whiskey sours. margaritas — those are very popular. ... I try to gauge my customers when I'm making these drinks, some people like a touch of cherry juice or bitters. But a lot of love goes into the martinis. If I had a nickel for every martini I made, or Manhattan or Brandy Alexander, I'd probably be a millionaire today. ... I personally do not like them, but my customers crave them.

A We no longer have it, but I had this brilliant idea, years ago, I said, 'I've got to drum up some business,' so I convinced Pasquale to buy one of those frozen machines, a blender, to make pina coladas. If I'm busy, I hated making them. It didn't last long, it broke, and nobody really liked it. One thing you're not going to do here is change it.

Q What do you do when you're off the clock?

A Go to the gym, Planet Fitness. I go to Connecticut a lot where my daughter-in-law lives and take care of my mother-in-law who lives with us.

Q What drinks are in your fridge at home?

A Nothing. I have heart issues, so I don't partake in one sip of alcohol. I used to be a heavy drinker back in the day, and then it would always be Coors Light, but not anymore. I don't indulge in that.

Q What's your favorite food to order at The Highland?

A My favorites are the scallops — that's a staple — sausage and peppers, hamburg steak — to me, that's a lost art. If you haven't had a hamburg steak smothered with our onion gravy, it's awesome. I'm not going to leave our appetizers out. We have onion rings unlike anybody else because they are hand-cut and breaded with our secret recipe we do our veal Parmesan with. And our wings, you've gotta try our garlic Parmesan wings — it's our best kept secret.

Q What do people come in here and talk to you about the most?

A Absolutely everything. Lately, the topic of conversation is how's my daughter-in-law doing, which means so much to me. They actually care about this place. They actually have time to put their cellphone down and have a normal conversation. That's the thing that irks me the most — in my family and anywhere else — sitting down and everyone's got their cellphones out.

Q What do you wish people talked to you about less?

A I'm open to everything. I can't say politics or religion — I don't care what it is. Many, many problems of the world have been solved over a glass of wine.

Q Whats your favorite part of the job?

A Absolutely the people. [Points to sign over the bar] That sign says it all: Fine food and grog. And if I had to add anything to it, I'd put conversation. That's important.