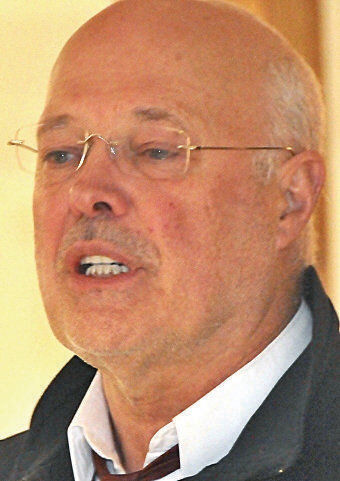 WILLIAMSTOWN — A sweeping theme-park-for-art vision of a economic and cultural transformation of the North Berkshire region — 2,000 new jobs and up to $180 million annually added to the economy, and tax-breaks for investors — was detailed for the first time in a public forum Sunday by art entrepreneur Thomas Krens.

Krens spoke to a full house at the Clark Art Institute in Williamstown, in the final of four lectures about his career from Williams College professor to head of the Solomon R. Guggenheim Museum and years helping create large-scale museum projects worldwide.

The Williamstown resident's latest project is the Extreme Model Railroad and Contemporary Architecture Museum, an idea now projected to transform downtown North Adams. While many details Krens discussed have been dribbled out in previous announcements and private newsletters, the talk was the first to knit together Krens' overall vision.

One key point: The project might be driven by investor money as a for-profit venture with the enticement of federal tax-code revisions designed to spur development in the nation's poverty zones. All of the museum's development would now be in two such zones designated last year by Gov. Charlie Baker.

Under the law, an investor seeking to shelter capital gains when selling an investment, can invest within 180 days into an Opportunity Zone fund that would in turn invest in the museum project. The result: deferred taxes on those gains until the end of 2026, as well a partial adjustment in their tax basis. The idea is create an incentive for people with large investment profits to make money helping low-income communities by giving the investor a tax break.

In the Q&A after his talk, Krens announced that the project has a website: emrca.com and he said — to the whole audience — that one could put in the password "emrca" to access it — "until we change the password."

The 2,000 jobs and $180-million impact come from a study and projections developed for Krens' group by Williams College economist Stephen Sheppard. Costs of the project and relationships between public and private investment are still in play, Krens said after his talk. Plans envision about $28 million in private investment and perhaps another $10 million from other sources for the museum components.

Center of the city

Worth noting in Krens' talk was a pivot away from the project's initial vision as a total remake of North Adams Heritage State Park, combined with a cavernous art gallery near the Harriman-and-West Airport near the city's border with Williamstown.

The new concept concentrates major construction in the center of North Adams, potentially replacing a giant parking lot to the south of Main Street — a vestige of 1960s urban renewal — with a grassy square dubbed, "Central Park Commons," surrounded by museum facilities and a new luxury hotel. Also replaced is a commercial building current housing a movie theater and other retailers. Asked post-talk if his group has an option to acquire the private property, Krens replied: "I'm under an [nondisclosure agreement]; I can't comment."

The Massachusetts Museum of Contemporary Art, an idea Krens originated in 1985, has not transformed North Adams as fully as planners hoped, he said. Hence the title of his Clark talk: "Unfinished Business: The EMRCA and the Diseases of Despair."

An expansive, destination museum project — built economically as a investor-owned for-profit enterprise — has the potential to continue that process.

"Mass MoCA's not had the economic impact that we projected," said Krens, even as it has been an incredible success critically. "The unfinished business here is, how do you get more people to come?"

The answer, said Krens, is in the melding of the concepts of museum and theme park, an evolution of the art-museum culture, with impeccable aesthetics, maximum impact and minimal capital cost. He called it "a museum-theme-park experience that appeals to all ages," with the goal of making the region the No. 1 cultural destination in the United States.

Krens cited Dr. A. Gray Ellrodt, a Berkshire Medical Center internist who serves on the museum's planning and finance committee, as saying the museum's economic and other impacts will have a greater positive effect on public health — "the diseases of despair" — than pure medical research.

"People will flock here to northwestern Massachusetts," Krens said. "And it will attack what Dr. Ellrodt calls those diseases of despair."

Krens predicted that with Sunday's talk, the museum project would now enter a more public phase, with more frequent disclosures and updates. Last week organizers announced they had leased space in a downtown North Adams vacant retail space for a project planning office.

"I think from now on we're going to be kind of a little more public about what we're doing and a bunch of strategies that will be evident sooner," Krens said. "I don't want to anticipate those. But I think we're going to begin to look for national press and bring to the attention of, I think, all the people around the world who will be interested in this."

Krens' planners are working toward a July release of a private-placement memorandum for circulation to qualified investors. For the next six months, they are relying on resources provided by planning money from the state as well as loans for about 24 private investors to continue developing a feasibility plan likely running as long as 1,000 pages. These early investors have loaned the project money on note terms, which will allow them preferential pricing when a legal investment offering is made.

In his talk, Krens outlined elements of the project:

- The train and architecture museum would comprise an 80,000- to 90,000-square-foot, long, narrow, sleek, zinc-facade building shaped like the front of a bullet train. Inside would be intricate, high-tech-designed and built replicas of 1,200 iconic worldwide architectural landmarks, each scaled to 1/48th of their actual size. Running amid the replica buildings would be 107 miniature "O-scale" trains on 9.5 miles of track — 12 separate lines guided from a high-tech control room. As of last week, it's planned to be located on an 11-acre parcel once owned by the Sons of Italy.

- Heritage Park still will be home to a Massachusetts Museum of Time — a private collection of some 96 industrial clocks, some more than a century old and some room-sized.

- A 110-room luxury hotel, spa and wellness center on Main Street with a 1,500-square-foot, open-air rooftop venue. Economic projections suggest the hotel could run at a profit at a 61-percent occupancy rate after three years, assuming an average room night charge of $348, Krens said.

- A for-profit Global Contemporary Art Museum — the component that was to have been near the airport — now is planned for a new building around the City Common Square. Some drawings also show a building housing a museum of motorcycles.

- A restoration of the long-shuttered Mohawk Theater designed by famed architect Frank Gehry. Said Krens: "Low capital costs ... no permanent seats ... but impeccable acoustics." The single-screen movie theater, opened in 1938, once at 1,200 seats.

- Two immersive, 3D video theaters to be designed to use technology pioneered by Hollywood special-effects pioneer Douglas Trumbull, who once had a design studio in Housatonic.

- A parking garage with open sides that could double in warm weather as a multistory evening event space.

Krens took pains to describe the train and architecture museum as much more than an elaborate childhood train set. He said it would be built using cutting-edge augmented reality, 3D printing and digital laser cutting of materials. Scenic backgrounds for the architecture and train layouts will consist of 1,200-foot long and 30-foot tall continuous video from 354 digital projectors.

Because of his tenure running the Guggenheim, sometimes amid controversy, and because he hatched the Mass MoCA idea, Krens is the most visible face of the museum project. But Krens posted a slide near the end of his talk and declared: "This is hardly a one-person event ... and that's what will make it successful," he said. "These things are always a community effort."

Reprinted with permission of The Greylock Independent.