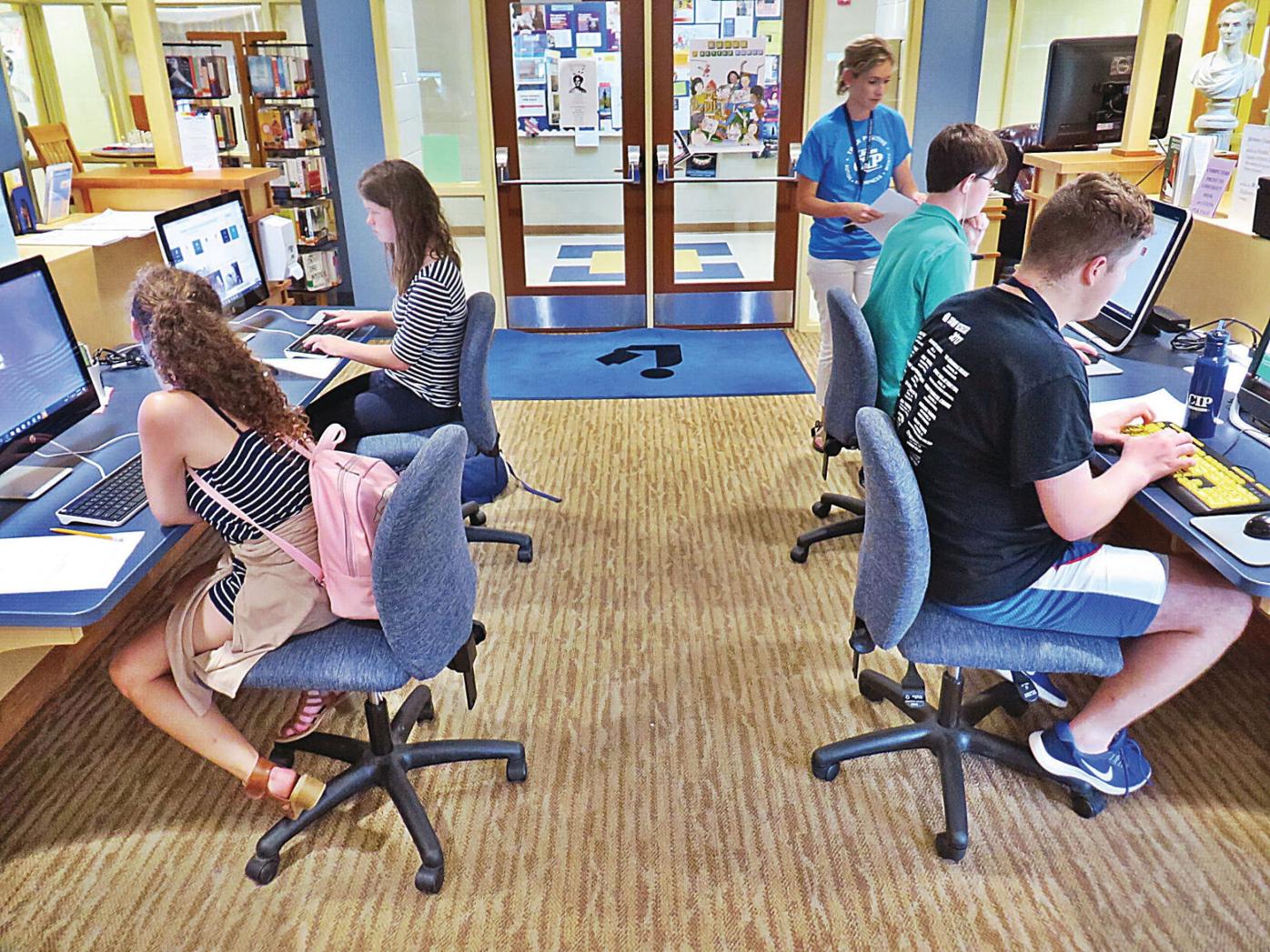 Students of the Summer@CIP program use resources in the West Stockbridge Public Library to help compile a list of books they recommend for people their ages, as part of an advisory group. 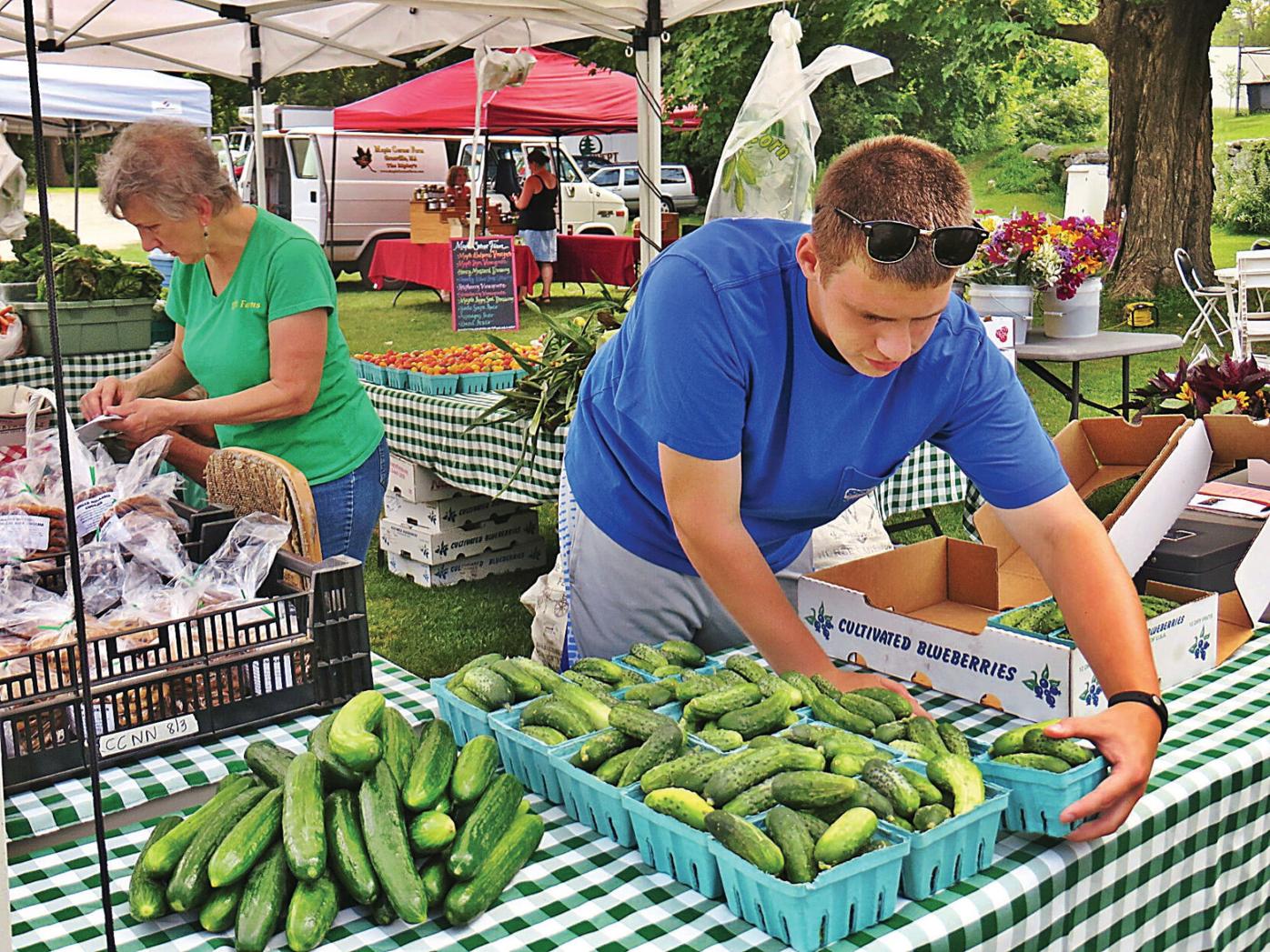 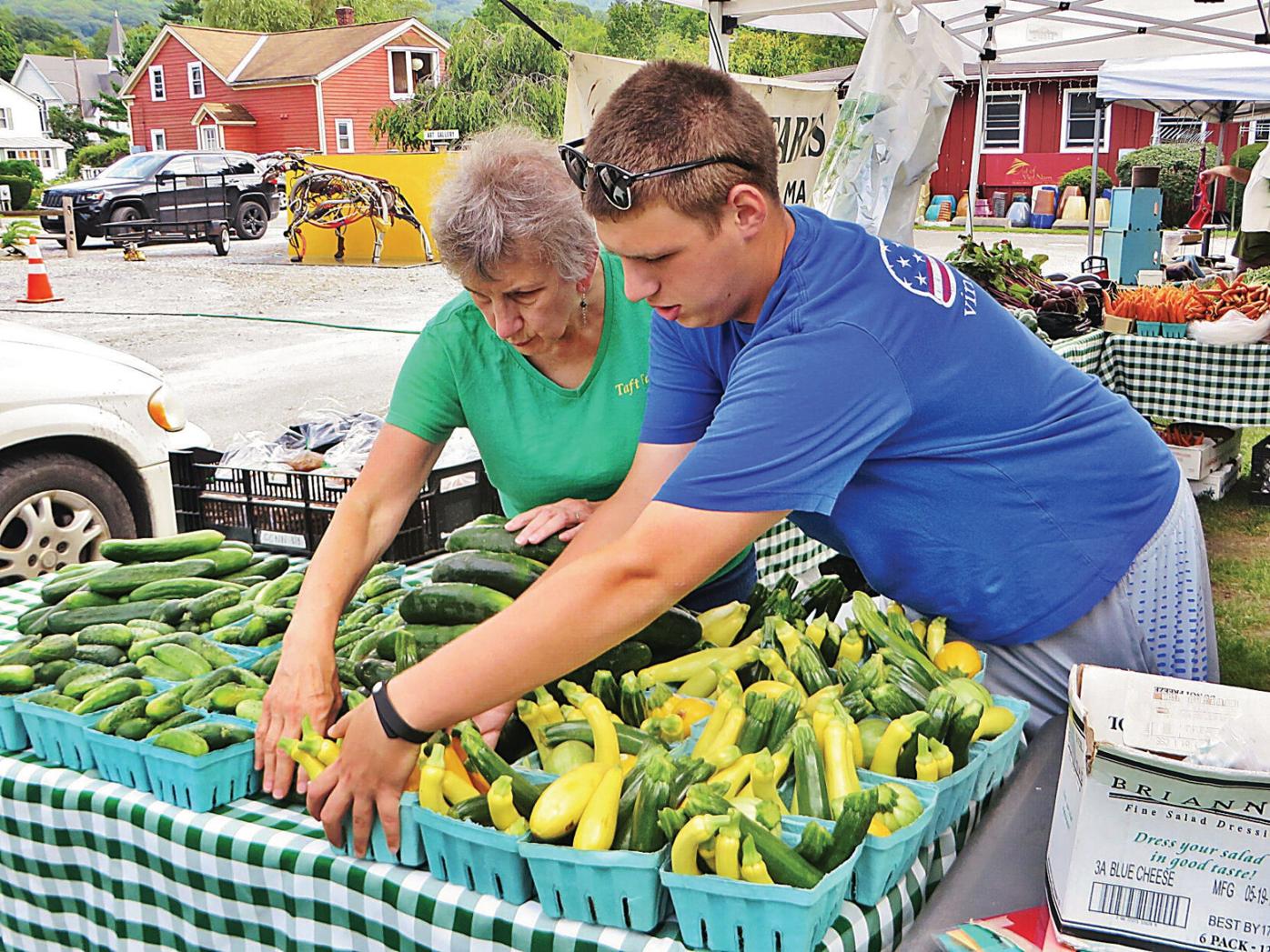 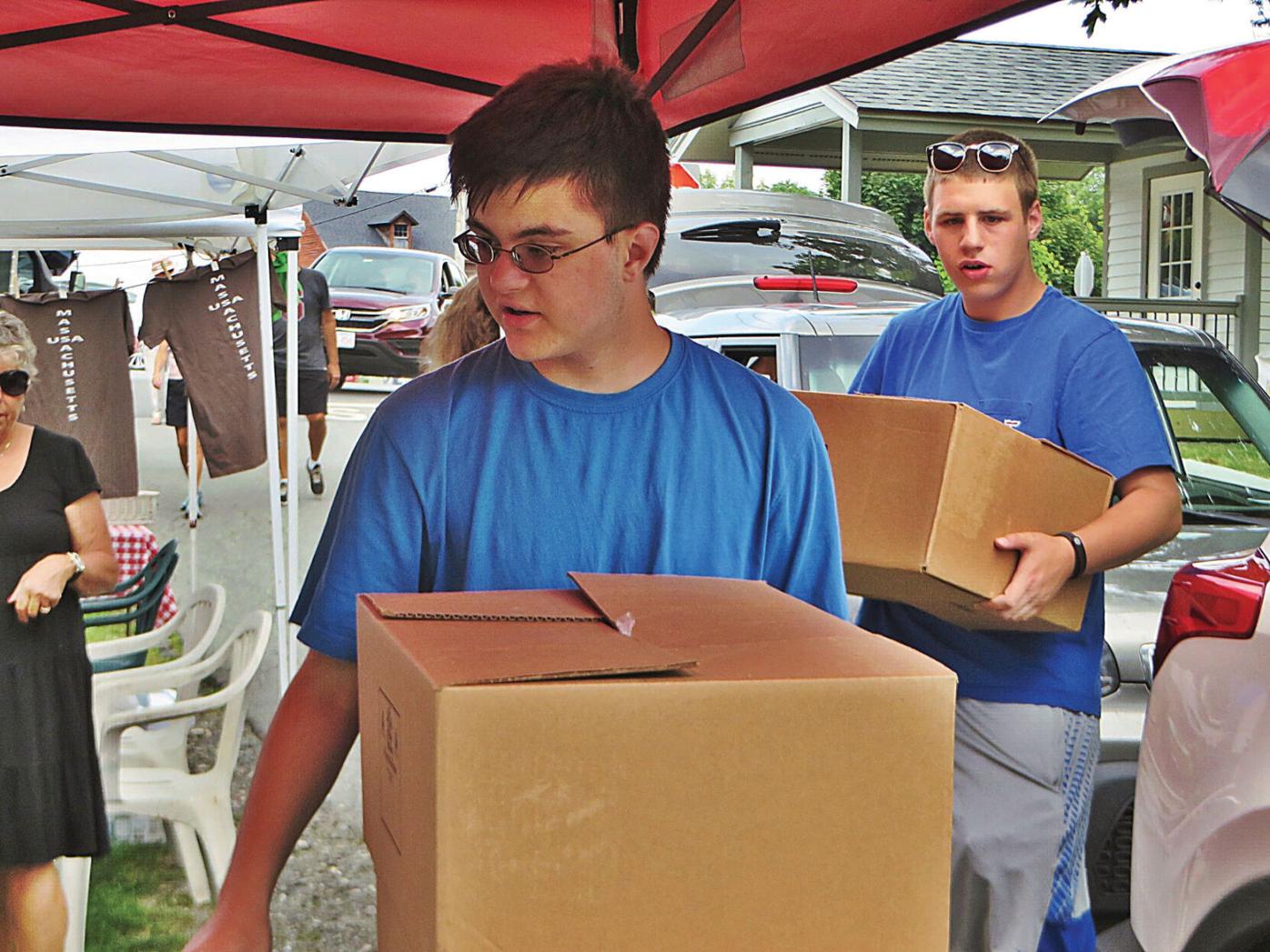 Will, 16, left, and Ian, 18, help a vendor set up their wares at the West Stockbridge Farmer's Market, held on Friday afternoons. The community service project was part of the Summer@CIP program to help young adults to develop their social skills. 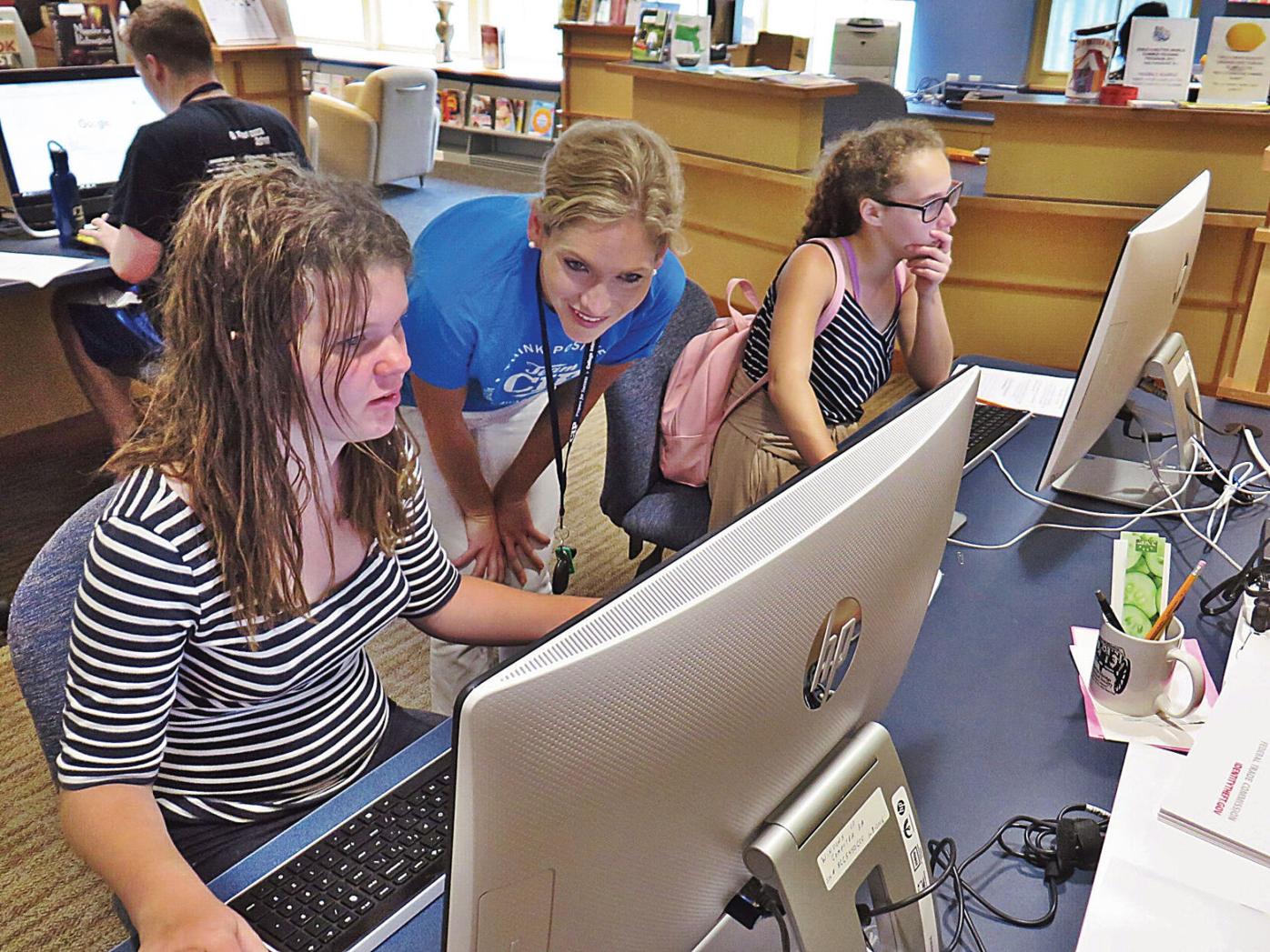 Students of the Summer@CIP program use resources in the West Stockbridge Public Library to help compile a list of books they recommend for people their ages, as part of an advisory group.

Will, 16, left, and Ian, 18, help a vendor set up their wares at the West Stockbridge Farmer's Market, held on Friday afternoons. The community service project was part of the Summer@CIP program to help young adults to develop their social skills.

Editor's note: For the privacy of some of the students, staff and their families, some sources in this story are referred to only by their first names.

WEST STOCKBRIDGE — As part of his summer program experience, an 18-year-old Littleon, Mass. student named Ian found himself not sitting around a camp fire or making arts and crafts, but putting his hands to work helping Taft Farms' Dan and Martha Tawczynski set up for the town's Friday afternoon farmer's market.

"It's been really great to have you here," Martha told the young man.

It's true. Ian's really good about volunteering back home and helping his grandfather with construction work. But not all of his peers in the Summer@CIP are as naturally inclined to put themselves in new social and work situations.

The program is designed for high school students and recent high school graduates with Asperger's syndrome or are high-function with autism, or for students who have other learning and communication differences.

Many of the 17 teenagers who attended this year's program in the Berkshires began the two-week sleep-away program in an uncomfortable place.

For Katie, 15, of New Jersey, it was her first time away from home for an extended period of time. "It was rare for me to talk to people," she said. But by last Friday, the last day of the program, she smiled as she paddled a ping pong ball back and forth over a gaming table with a new friend in their dorm's lounge, and even volunteered to be interviewed for this story.

"I'm usually kind of shy around people, but here I've been able to connect with people in a short amount of time," she said.

She and her summer program friends were also able to use a variety of locales across Berkshire County to help them push beyond their individual comfort zones.

For several students, this included taking on supportive and encouraging roles while traversing the aerial park and tree-climbing courses of Ramblewild in Lanesborough.

"I started taking more of a leadership role," said Will, a 16 1/2-year old from Sudbury, Mass. In addition to encouraging other people, Will also pushed himself to gradually work his way up the levels of the high ropes course and through some more advanced obstacles.

In addition to the Ramblewild experience, the students visited restaurants in Lee, where their dormitory is based; saw films in local movie theaters, explored area museums, and traveled outside of the region to go to a Six Flags theme park.

Last Friday, in addition to helping at the farmer's market, students in small groups helped groom the waterfront of Card Pond, and work on a reader advisory group project in the West Stockbridge Public Library.

But trips aside, Jake, 15, of Long Island said the most interesting aspect of the program was the people there. "I enjoyed the new faces and meeting new staff," he said.

Jake said it was the staff there who helped him get over his nerves during the first two days of the program. "I was very upset, but they were great," he said.

Matt Kosiorek, director of summer programs and outreach, said that while the program incorporates a handbook and curriculum, which each participant receives, the true aim of the program is to help the young people to experience a newfound independence, to be away from home, to make independent decision and have fun with people their age.

"It's about building that confidence level," said Kosiorek. "By the end of the two weeks, for some of them, it's like night and day. They put themselves in social settings they might otherwise not."

Something like going to a restaurant with their friends is a newer experience for many participants, especially when it comes to budgeting their two-week allowance for a night out, and figuring out how to split a check with others.

The students, who range in age from 15 to 19, are asked to use a buddy system to keep track of each other, but have some freedom to go about town and do whatever activities that interest them in the dorms.

These experiences are important to have, especially for Katie, Jake, and Will, who all said they plan to go to college. Katie hopes to study theater and music at a four-year school, while Jake wants to study to be a teacher at a state college near his home.

"I think this will prepare me to go away for college. I'd like to go for art somewhere in New England," said Will.

Kosiorek said, "part of our social skills curriculum training is how to maintain friendships, so we encourage them to exchange contact info, and are coaching them how to reach out to their peers and think of ways they could meet up and do things together."

Said Katie, "I feel like this is going to serve as motivation going forward. Because I tried something new here, I think I'll be more likely to do something new in the future."