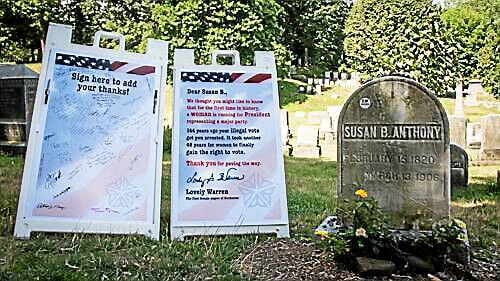 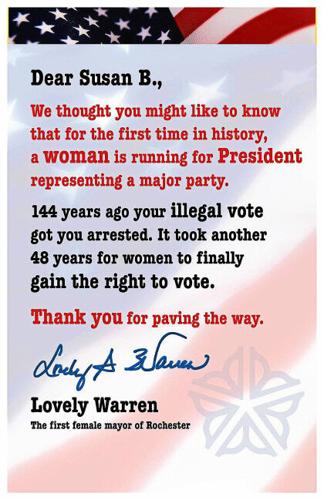 ADAMS — Suffragists Susan B. Anthony and Elizabeth Cady Stanton used to contemplate a future in which women not only had the right to vote, but also held political offices — including president of the United States.

"On several occasions, Stanton noted that it would be 100 years before a woman would be president; Susan disagreed," Colleen Janz, executive director of the Susan B. Anthony Birthplace Museum, said in an email on Friday. "Here we are, 96 years after the ratification of the 19th Amendment with the first woman on the ballot for a major political party. Susan B. Anthony most surely would be disappointed in how long that the process took. However, I also feel that through her disappointment, she would see the thousands of women who paved the way."

Anthony, who was born in Adams, moved to Battenville, N.Y., with her family at the age of 6. She moved to Rochester as an adult and remained there until the time of her death and is buried in Mount Hope Cemetery, where it has become custom for residents to pay tribute to her on Election Day. Anthony, who is best known for her tireless fight to earn the right for women to vote, cast an illegal ballot in the 1872 election.

"Susan wanted to cast her ballot, get arrested, go to jail and work her way through the court system until she could ask the question 'Is it a crime for a U.S. citizen to vote?' Janz said. "Although, the plan was flawed, Susan B. Anthony did vote in that election, was arrested and put on trial. She received a fine of $100, which she refused to pay in order to be sentenced to prison, however, this never happened and the fine is still not paid today."

On Thursday, Rochester Mayor Lovely Warren, the first female mayor of the city, celebrated Hillary Clinton's place in history as the first woman to secure the presidential nomination of a major party, by placing a sandwich board with a "thank-you" letter next to Susan B. Anthony's grave.

The poster-size card reads: "We thought you might like to know that for the first time in history, a woman is running for president representing a major party. 144 years ago your illegal vote got you arrested. It took another 48 years for women to finally gain the right to vote. Thank you for paving the way."

A second board, where individuals could "sign" the card and leave messages of gratitude was also placed at the grave.

"My grandmother always taught me it was important to never forget where you came from," Warren told. "I wanted to make sure Susan B. knew how important she was. She dedicated herself to making sure women would be able to enjoy the same things that men enjoy. Though she was never able to see that day, eventually we got it and because of that and the work she did we have a female mayor in the city of Rochester."

Janz said she believes Anthony would have much to say about modern politics.

"We have made great progress in the obtaining equal pay for equal work and she would be proud that Clinton is carrying that torch," she said. "Susan B., herself, fought for equal pay before quitting her job as a school teacher when her school refused to pay her the same wage as a newly hired male teacher. She was a Quaker and preferred peace. I think that Susan would offer words of encouragement to Hillary Clinton about using less force, less aggression in solving conflicts. Susan B. Anthony, as well as many of the early suffragists, believed that women would have been better in bringing greater peace and equity to world government and affairs."

She added, "Another point that Susan B. Anthony would very much support Hillary Clinton with, is her stance on family and maternity leave. Susan B. Anthony trumpeted the 'divine' calling of motherhood, and would appreciate the efforts made for family values and family bonding."

If Anthony were alive today, Janz believes her message to the American public would be that of voter participation and civic duty.

"She believed that everyone should educate themselves on the topics, not just follow rhetoric," she said. "She believed that men and women have the responsibility to ensure that the government is representative of the people and their beliefs and the only way to have this be true is to participate on election day ... Susan B. Anthony knew and acted upon the fact that we are a government by the people for the people, and that goes beyond election day."

For more information on Anthony, visit the Susan B. Anthony Birthplace Museum at 67 East Road in Adams or www.susanbanthonybirthplace.org.

Editor's note: This article was updated on July 31, 2016, to correct that Ms. Anthony's family moved to Battenville, N.Y. She moved to Rochester as an adult.