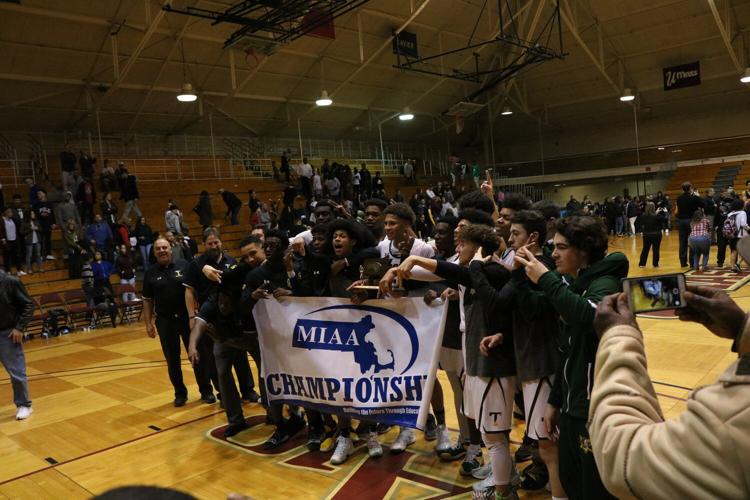 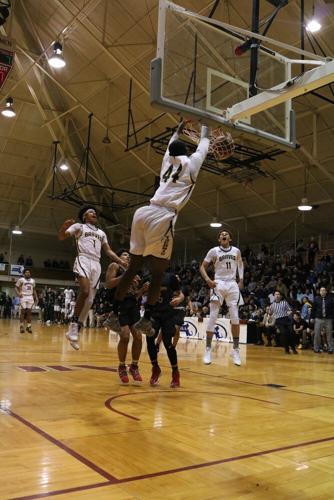 Taconic's Mohammed Sanogo throws down an alley-oop finish on a pass from Quentin Gittens during the team's Western Mass. Division II championship game against Chicopee. 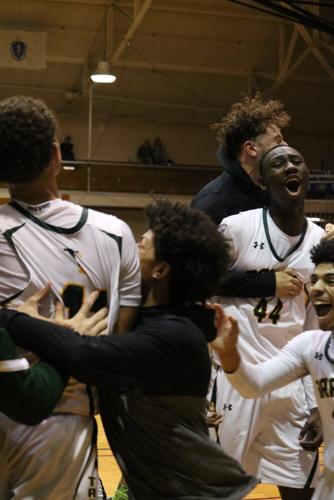 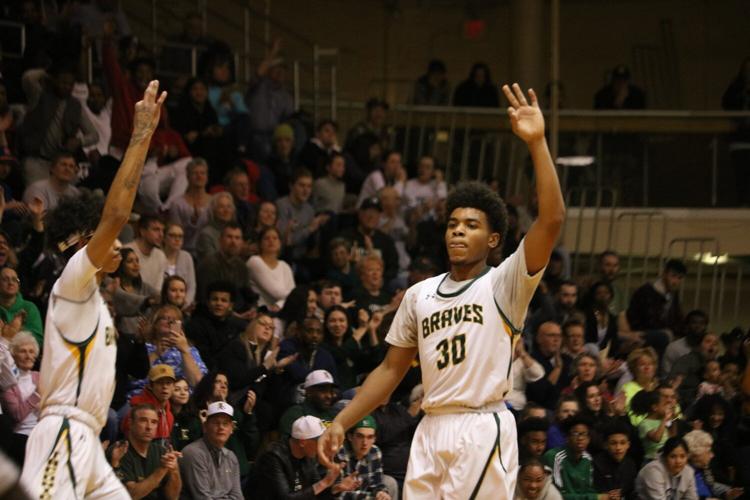 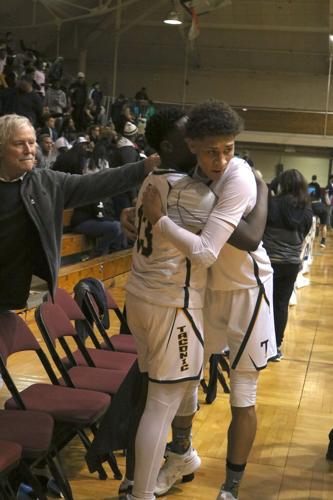 Taconic's Mohammed Sanogo throws down an alley-oop finish on a pass from Quentin Gittens during the team's Western Mass. Division II championship game against Chicopee.

AMHERST — Last year might have been a dream come true. This year for the Taconic High boys basketball team, it was taking care of business.

"I feel like this has more meaning than the other one," Taconic's Quentin Gittens said, clutching the Western Massachusetts Division II trophy like he would not give it up. "The first one, we really didn't believe it. It was kind of unreal.

"This one, it really sinks in."

Gittens and his top-seeded Taconic teammates celebrated on the Curry Hicks Cage floor after beating No. 2 Chicopee 66-51 in the last of six championship games Saturday night.

The Braves, who have not lost since losing to St. John's of Shrewsbury back in December, have now won 18 consecutive games.

Gittens was part of a three-headed Taconic monster on Saturday night. Isaac Percy had a game-high 30 points and eight rebounds. he also had two assists, a block and a steal. Gittens, one of six seniors on coach Bill Heaphy's team, finished with 18 points, seven rebounds, four assists and three steals. Mohammed Sanogo added 10 points, six boards, three blocked shots — and several others that were altered — and a couple of rim-rocking and momentum-changing dunks.

"We came in here, wanted to go back-to-back. We were just hungry for it," Percy said on the Cage's court, surrounded by classmates, family and friends. "I would obviously say that last year was more exciting. Forty years not winning it and finally getting one.

"But being a team to go back-to-back is amazing right now."

Taconic is the first Berkshire County boys basketball team to win consecutive Western Massachusetts titles since Hoosac Valley accomplished the feat in 2015 and 2016. The Braves are the first city of Pittsfield team to go back-to-back since St. Joseph did it in 1994 and 1995.

Taconic will play Central Massachusetts Division II champion Westboro on Wednesday at American International College. The tip-off is set for 7:30 p.m. AIC, by the way, is the college alma mater of Taconic coach Bill Heaphy.

Percy had 19 of his points in the first half.

"He shot it well," Heaphy said. "Once he's got his stroke, he rebounds better, he makes better decisions. He played well."

Taconic (19-3) trailed for most of the first quarter, but used a 5-0 burst to tie the game at 15. Percy drained one of his four 3-point baskets on the first possession of the second quarter, making it 18-15. While Taconic never trailed again, the Braves had to really work to claim the championship.

Every time Chicopee (14-8) made a run at Taconic "they had an answer," Pacers coach Steve Menard said. "That's why they're Western Mass. champs. We made a nice run, and to their credit, every time we made a run, they ended it with a 3, or something like that.

"Taconic has a fantastic team. [Heaphy] does an amazing job with those guys, and they were ready from the jump."

Taconic didn't get this win without making Heaphy, his staff and the Taconic faithful sweat. The big challenge came in the third quarter.

The Braves led 34-24 at halftime and extended their lead to 12 when Percy scored off an assist from Quincy Davis, making it 40-28 with 5:30 left in the third quarter.

The Pacers were not done. Freshman Jo Paul KcKrieth, who led his team with 16 points, seven rebounds, three steals and two blocks, responded to the Percy basket with one of his own.

McKrieth started a 12-2 run that lasted for 3 minutes, 38 seconds. In Taconic's eight possessions during that run, the Braves went 1 for 4 with four turnovers. The only Taconic hoop in that run was a deep 3-point shot by Davis.

As Chicopee's coach said, every time his team made a run, Taconic had an answer. The Braves did here as well.

Isaiah Haines, who had 11 for the Pacers, was fouled by Percy in the act of shooting. He missed the first free throw, but made the second, cutting what was a 12-point lead to 43-41 with 1:25 left. The Pacers did not score again in the quarter.

In fact, Gittens got the inbounds pass and drove coast-to-coast for a basket. Then maybe the biggest sequence of the game took place.

Percy took a shot, missed, and Chicopee's Kobe Parker rebounded. He missed not one, but two attempts to cut the Taconic lead. Percy got the rebound, passed ahead to Gittens who found Mohammed Sanogo in transition for a dunk. That closed out the quarter, with Taconic leading 47-40. Sanogo had four dunks in the game, none bigger that the one that closed out the third quarter.

"[The dunk] always turns things around," Taconic's Robert McCown said. "They're just energy plays. When he gets going, we all just want to do everything we can to pick up the scoring. That dunk helps us out even more."

The Braves put the game under lock and key by scoring the first nine points of the third quarter. As he did for the third time in the game, Percy started the quarter with a 3-point basket. The Pacers couldn't stop the run, and by the time Gittens scored with 5:10 left to go, the Braves had an insurmountable 16-point lead.

"They're an athletic team, and if we don't get back [on defense], they're going to score," Heaphy said. "I thought we were slow at first, and then we got back a little bit better. Got ourselves set and closed out on shooters."

Now, Taconic has a couple of days to prepare for Westboro. The Rangers, like Taconic, were the top seed in a six-team field and went right to the semifinals. Westboro handled second-seeded Medway 73-39 in the Central Mass. title game at Worcester State University. The Rangers won their first title since 1991.

"[Chicopee] came in not thinking they were going to lose. That's how you should always think," Taconic's McCown said. "That's what we thought. It was a hard one to pull out.

"The harder they are, the better they are to win."