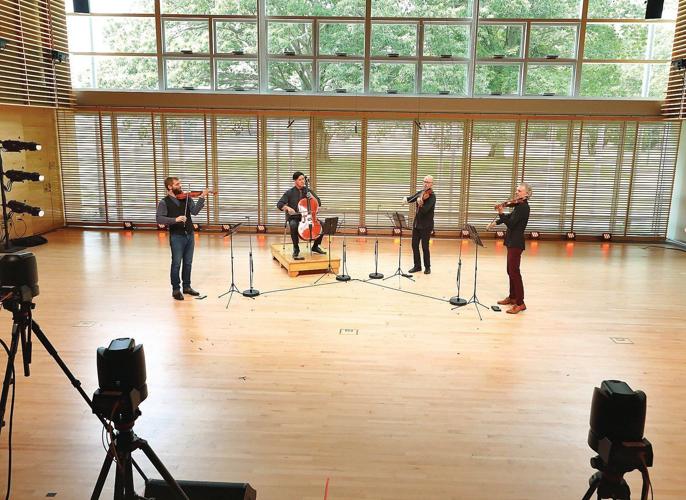 A behind-the-scenes look as Brooklyn Rider performs at the Linde Center during the 2020 streaming season of Tanglewood. 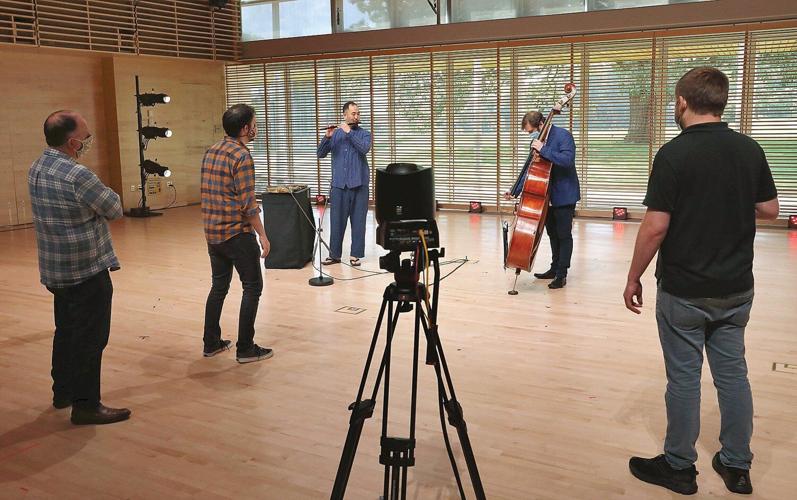 Tanglewood Director Tony Fogg and crew prepare members of Silkroad for a recording session at the Linde Center. Due to COVID-19, no summer concerts were held in person at Tanglewood, but instead, intimate, though certainly more staged, concerts were recorded.

A behind-the-scenes look as Brooklyn Rider performs at the Linde Center during the 2020 streaming season of Tanglewood.

Tanglewood Director Tony Fogg and crew prepare members of Silkroad for a recording session at the Linde Center. Due to COVID-19, no summer concerts were held in person at Tanglewood, but instead, intimate, though certainly more staged, concerts were recorded.

LENOX — Recorded music is frozen music. Someone once compared it to a stuffed owl: an artifact, not the living creature. Or these days it could be music played to cardboard cutouts sitting in the stands at a sports event.

Rather than lose a season altogether, Tanglewood took a chance on an elaborate series — seven series, actually — of videos for streaming when the coronavirus killed any hope for live music during the season just past.

The modestly priced recordings could not have come close to making up the lost revenue from a summer barren of live concerts. But the venture proved surprisingly successful in other ways, even without the combustion that occurs when musicians and audience feed off each other's energy.

Besides keeping its name before the public, Tanglewood gave some of its musicians temporary employment and left a solid digital legacy. In the videos I watched, the quality of performance was consistently high, even if a few of the contemporary pieces were of dubious value.

Three series were newly recorded for the Online Festival: a celebrity series and a series by Boston Symphony Orchestra members, both recorded in the year-old Linde Center, and another celebrity series recorded for Tanglewood in distant venues. Three archival series featured outstanding BSO and Tanglewood Music Center concerts from the past. Yet another series presented classes, lectures and demonstrations from the Tanglewood Learning Institute.

Recorded music is well over a century old. One of the most striking things about Tanglewood's freshly made videos was their gleaming technical perfection: not a wrong note, it seemed; not a smudge, not a phrase gone awry. And all in that glorious bath of warm Linde sound. It was uncanny.

But it wasn't uncanny. It was the result of multiple takes seamlessly spliced together to achieve what a single unbroken take, whether on a recording or in concert, can't do.

Distractingly, you could actually see the process at work in the sunlight coming through Linde's high windows. One minute it was midday; minutes later, twilight was coming on. Within a single performance, sometimes shades were up, sometimes down. Sometimes interior lights were yellow, sometimes blue.

The camera work, though skillful, increased the artificial effect. The cameras moved ceaselessly between flying fingers, facial grimaces and long, soulful shots, sometimes alighting for no more than a few seconds. Even as you admired the wizardry, the technological trickery reminded you of how unlike a real concert this was.

Consider the festival's final program of two Beethoven sonatas played by the superb duo of violinist Joshua Bell and pianist Jeremy Denk. Performance doesn't get any better than this. But instead of walking out of Ozawa Hall uplifted in the company of your fellow concertgoers, you turn the computer off and go for the potato chips.

Some of the archival performances generated memories of excitement past. I was able to choke up all over again at the Brunnhilde-Wotan farewell kiss in the TMC Orchestra's inspired 2019 performance of Act 3 of "Die Walkure" under Andris Nelsons. Christine Goerke and James Rutherford headed a strong cast that brought the story vividly to life even in a concert version.

Similarly, Seiji Ozawa's 2002 farewell concert was a happy-sad recollection of his 29 years at the head of the BSO. The Learning Institute's large array of offerings ranged from a Beethoven 250th-anniversary survey to a look at the Roaring '20s - more offerings, probably, than any one person could take in.

In one way, these successes prove the resilience of classical music. When live music becomes impossible, musicians keep their art and their skills alive with recordings that give pleasure.

Yet picture Tanglewood next year. Even if the pandemic has passed, will thousands of people want to sit elbow to elbow in slatted wooden chairs again? More broadly, will listeners' expectations have been altered by a year of technical perfection on videos or time spent on the endlessly available offerings on the internet and TV? It's a problem not just for Tanglewood but for classical music in general amid a public mad for popular music and popular culture.

Classical music will live on; enough people care. But classical music has always lived on altered as the world around it has changed. There is no substitute for the communion between musicians and audience in living performance of the classical and modern masters. The day when a Beethoven symphony becomes a stuffed owl will be the day when technology really has won.