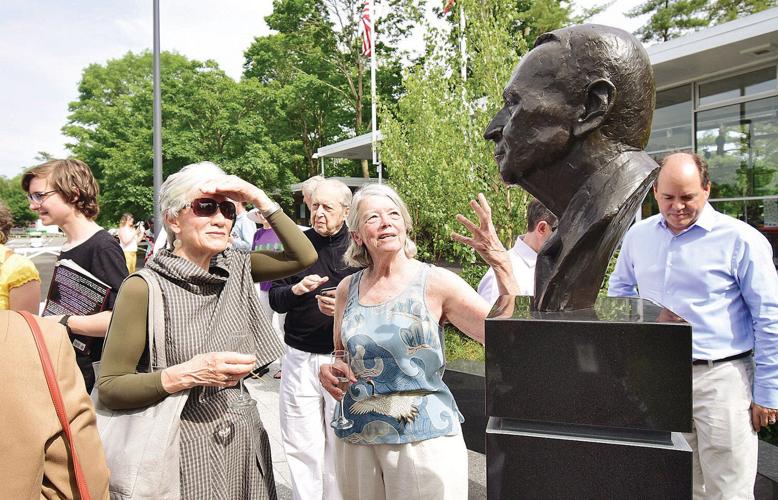 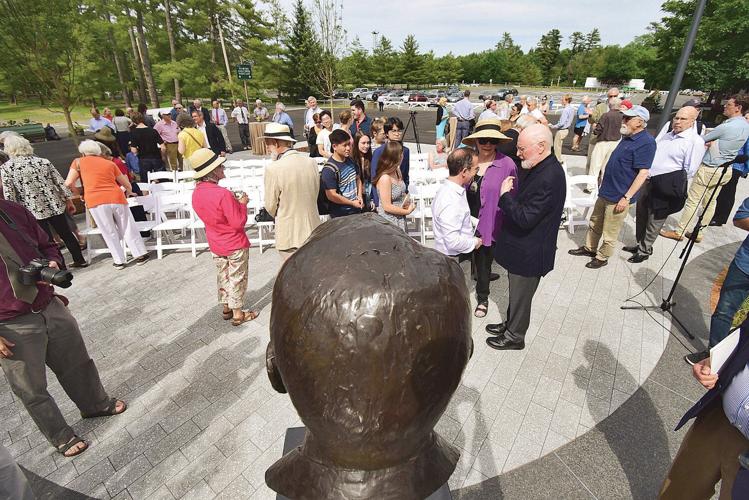 A sculpture of Serge Koussevitzky, founder of Tanglewood, was the center of attention Monday during an unveiling ceremony and reception at the music center in Lenox. The sculpture is by Penelope Jencks. 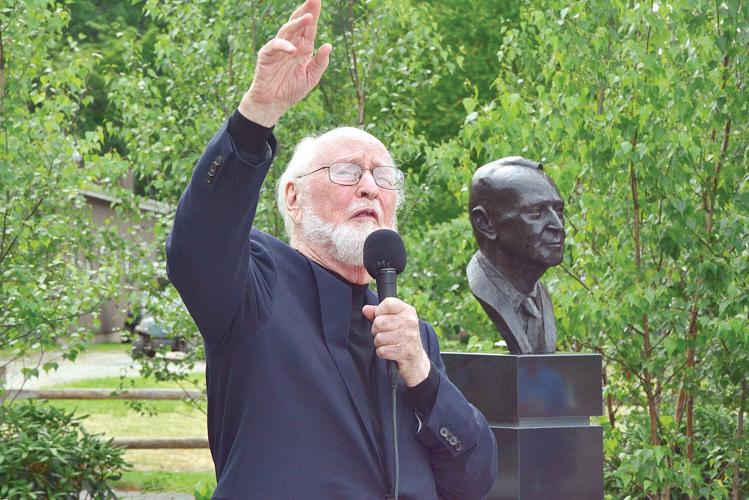 John Williams speaks Monday during the unveiling of a sculpture of Serge Koussevitzky, founder of Tanglewood, during a ceremony and reception in Lenox. 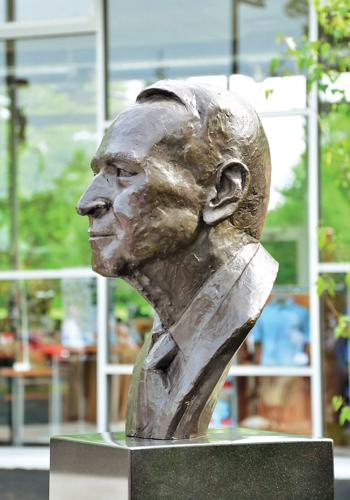 A sculpture of Serge Koussevitzky, founder of Tanglewood, was the center of attention Monday during an unveiling ceremony and reception at the music center in Lenox. The sculpture is by Penelope Jencks.

John Williams speaks Monday during the unveiling of a sculpture of Serge Koussevitzky, founder of Tanglewood, during a ceremony and reception in Lenox.

LENOX — The main gate at Tanglewood has a dramatic new look this season, thanks to the installation of a sculpture honoring the music festival's founding father, Serge Koussevitzky.

The work by sculptor Penelope Jencks, unveiled at a Monday afternoon ceremony, was commissioned by John Williams, the third and last in a series he has funded honoring the three famous musicians, including Leonard Bernstein and composer Aaron Copland, who were central to the Boston Symphony's summer home and its academy for young musicians.

Williams, the world-famous film composer, Boston Pops Laureate Conductor and Tanglewood artist-in-residence, presided over the dedication of the sculpted tribute honoring Koussevitzky, who created Tanglewood in 1937 and opened his brainchild, the orchestra's academy for the most promising, advanced music students in 1940.

"I've been coming here regularly for 39 years now and haven't missed one," said Williams, who composed some of his best-known film scores while in residence here. "From the very first day, it has taken my heart. I love this place deeply." He described Koussevitzky's most enduring legacy as the Boston Symphony Orchestra's summer music festival and the Tanglewood Music Center academy.

"This place has a permanence about it" that can endure for generations if future leadership can be recruited to match the current level, he added.

Williams recalled having seen the statue of Eleanor Roosevelt in Manhattan's Riverside Park many years ago. When he decided Tanglewood needed permanent monuments to composer Copland, Bernstein and Koussevitzky, he figured that "the guy who did that Eleanor Roosevelt, that's my man. That was maybe before my reconstruction in the gender age, so it turned out that my man was my lady, and that is Penelope."

"I also love John Williams," Jencks, 83, told the crowd of well over 100 onlookers at the main gate ceremony. "My speaking does not come out of my mouth, but out of my hands, and so the sculpture is what I can say, and that's all I can say."

As Williams untied a large red ribbon to unveil the handsome sculpture of Koussevitzky, the crowd offered "oohs, ahhs" and enthusiastic applause.

Spotting BSO President and Chief Executive Mark Volpe in the crowd, he said, apparently half-seriously, "The next sculpture will be of you."

"This is a very happy moment for me," Williams said, joking that people will learn to spell Koussevitzky "and it will be particularly beautiful at night" because of new overhead spotlights focusing on the sculpture for audiences entering and leaving the grounds.

Jencks's bust of Bernstein was dedicated at Tanglewood's Highwood Manor in 2014, preceded in 2011 by the installation of the sculpture of Copland in the formal gardens behind the Tappan Manor House.

Before Monday's unveiling, four members of the BSO's double bass section, led by principal bass Edwin Barker, performed several pieces, including two composed by Koussevitzky, who was a bass player before he took up conducting.

Introducing the tribute, Volpe noted that the sculpture installations culminate a project first conceived by Williams two decades ago.

"By honoring these three legendary figures in a permanent way where all visitors can see and learn about them, John has ensured that their stories and their transformational impact on Tanglewood will continue for generations," said the BSO's top executive. "He made certain that those who come after us will know these giants and what they meant to this place and the American musical landscape."

"Finding the most appropriate site for Koussevitzky was challenging, as his presence is felt throughout the campus," he acknowledged. "But we believe we found the perfect place where he will be seen by hundreds of thousands of people every year."

Koussevitzky served as BSO music director from 1924 to 1949 and was the leading mentor and father figure to Bernstein, who was in the first class of the music academy, first known as the Berkshire Music Center, in 1940.

Volpe lauded Williams for his "generosity that certainly made this project possible, along with so much more. His dedication and contributions have not been limited to these sculptures, and we're so grateful to you, John, for all you've done and continue to do for Tanglewood."

"John is a legend and a fixture, too," Volpe continued, "not just as a conductor and composer, but more important, in the way he embodies the spirit of Tanglewood by passing on his knowledge and experience to the younger musicians, composers and conductors of the Tanglewood Music Center. We're deeply indebted to you for all you've accomplished and all you've given to recognize these legendary figures of Tanglewood, and to ensure that this place remains a home for artistic inspiration for generations to come."

In his only scheduled conducting appearance at Tanglewood this summer, Williams will share the podium with film composer-conductor David Newman for a special Boston Pops "Across the Stars: Music of John Williams" concert on July 7, featuring violinist Anne-Sophie Mutter performing Williams's new arrangements for her of music from "Star Wars," "Harry Potter," and several other films. Williams will introduce, but Newman will conduct the annual Film Night concert on Aug. 24.

For the "Indiana Jones 5" film to be directed by Steven Spielberg and currently due for release in summer 2021, Williams, 87, is attached as the composer. His ninth and final score for the Star Wars franchise is "Star Wars: The Rise of Skywalker," expected in theaters this December. His close collaboration with Spielberg has yielded music for 29 of the director's 32 feature films.

Over his six-decade career, Williams has composed more than 100 film scores, in addition to at least 20 concert hall works, numerous fanfares and special-occasion pieces, as well as all the NBC News themes still heard daily on the network. He has earned five Academy Awards and 51 Oscar nominations, making him the Academy's most-nominated living person. In December 1993, Williams retired as Boston Pops conductor after 14 seasons following Arthur Fiedler's half-century tenure.