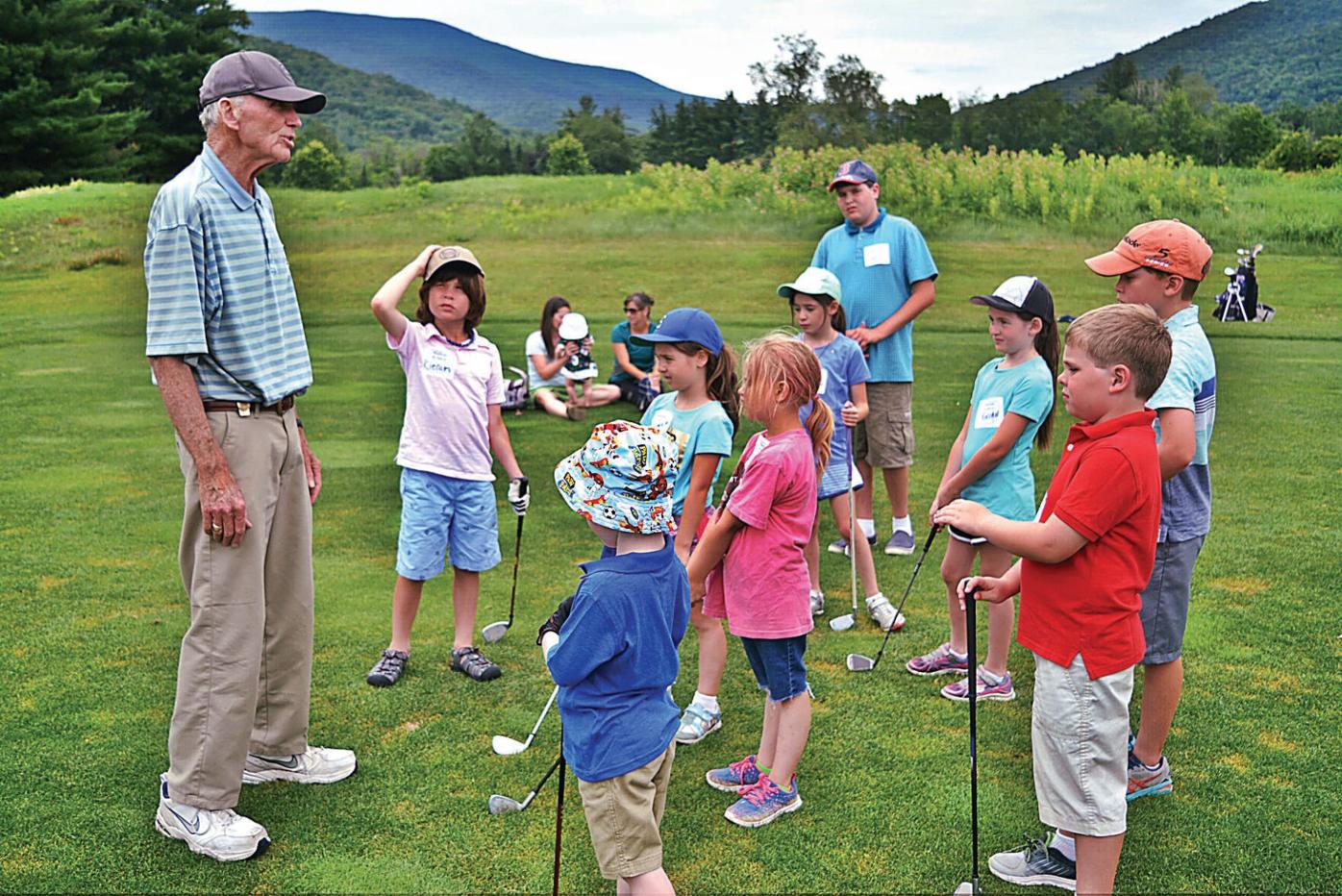 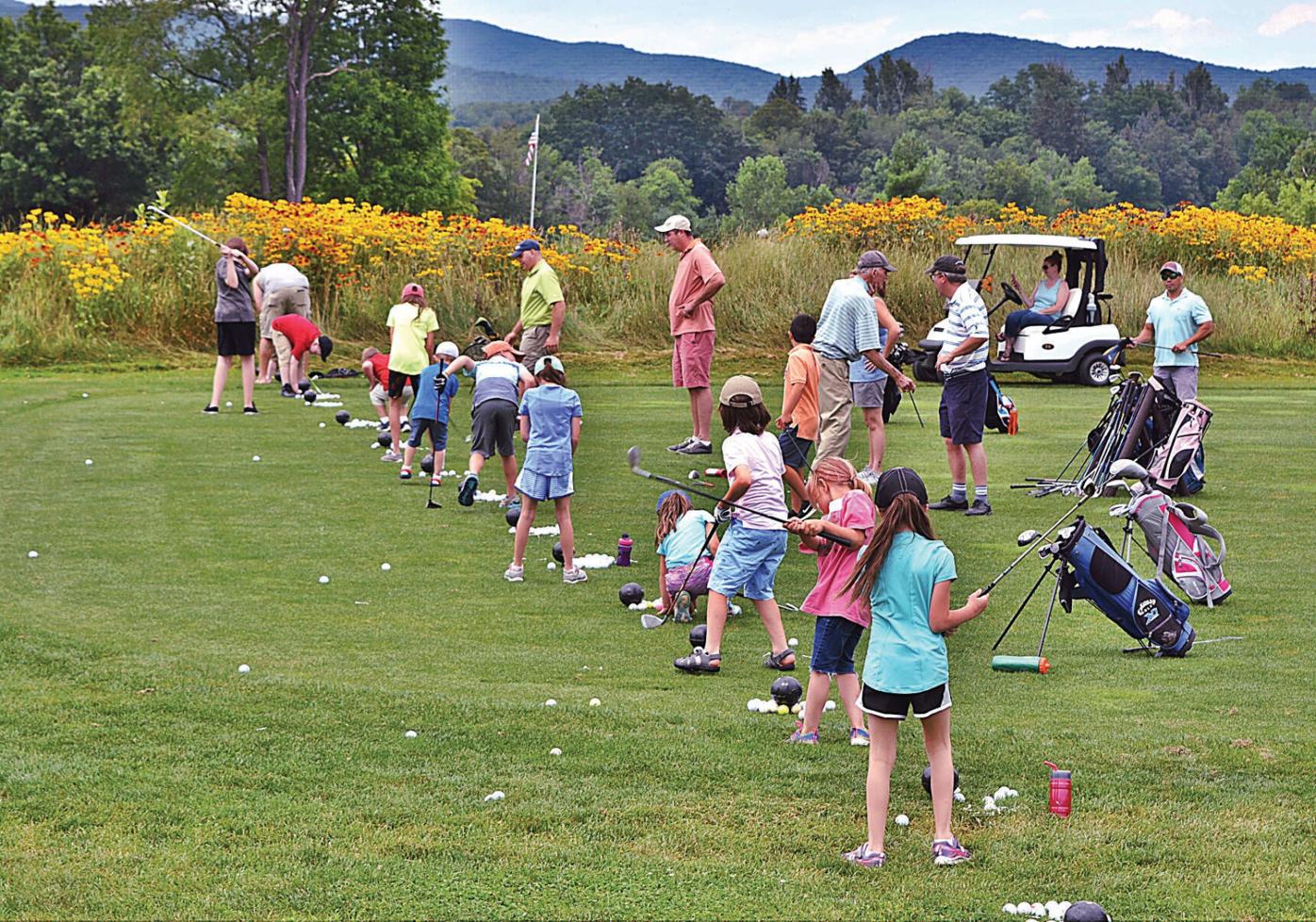 Over a dozen children hit golf balls as Peter French teaches a golf clinic for kids at Waubeeka Golf Links in Williamstown on Sunday, June 23, 2017. 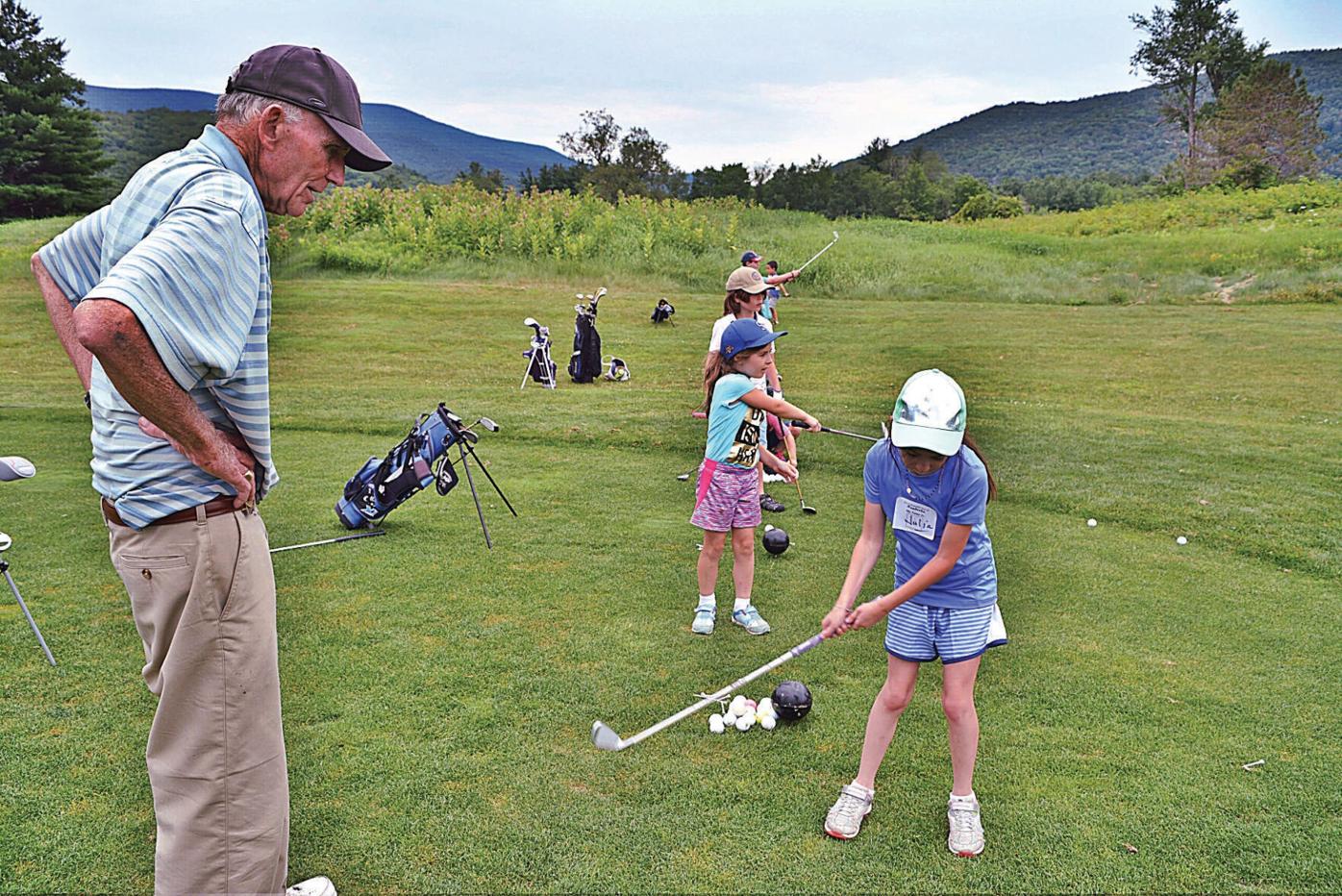 Peter French watches Julia Vareschi, 8, as she swings during a golf clinic for kids, taught by French, at Waubeeka Golf Links in Williamstown on Sunday, June 23, 2017. 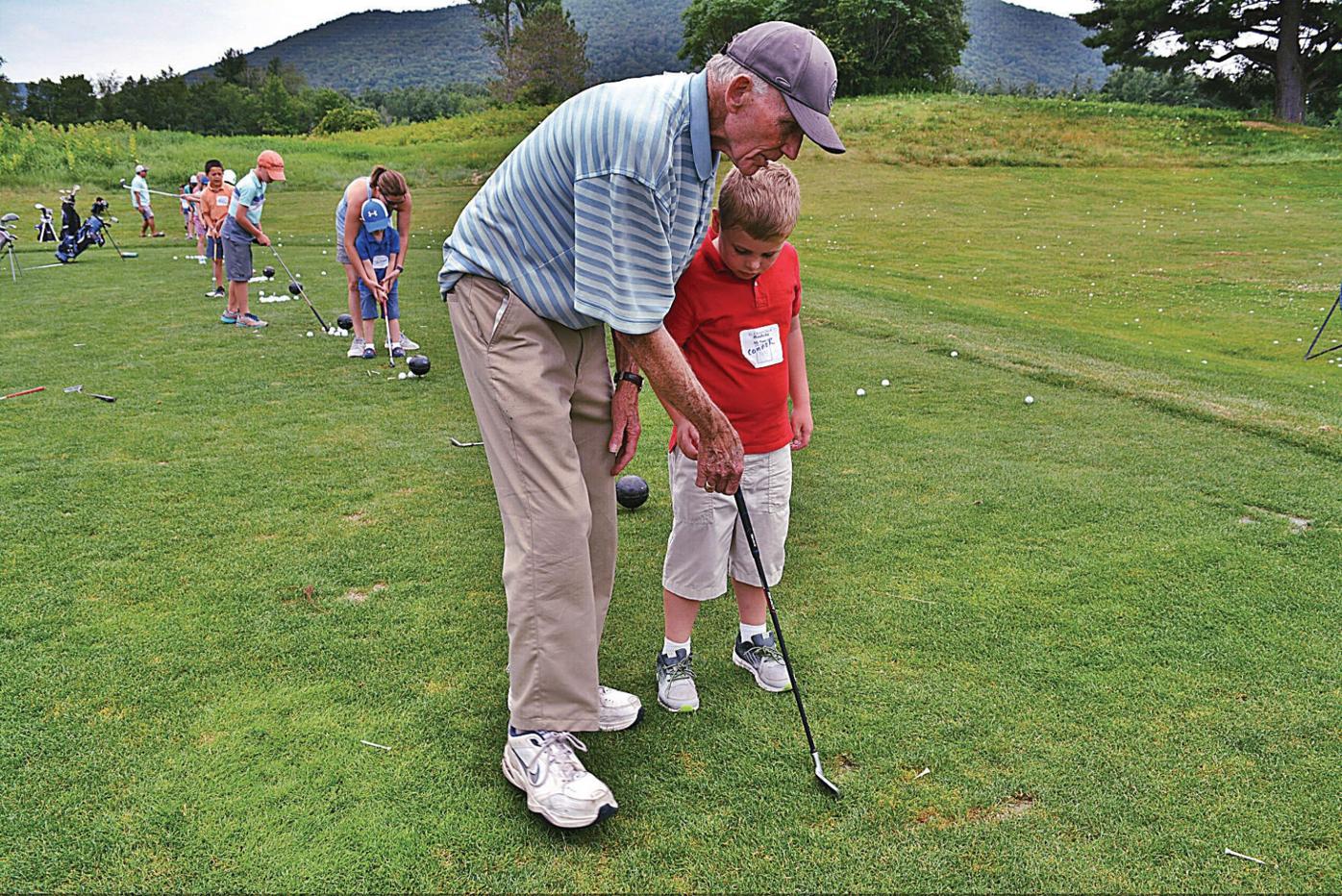 Peter French gives instructions to a young golfer during his golf clinic for kids at Waubeeka Golf Links in Williamstown on Sunday, June 23, 2017.

Over a dozen children hit golf balls as Peter French teaches a golf clinic for kids at Waubeeka Golf Links in Williamstown on Sunday, June 23, 2017.

Peter French watches Julia Vareschi, 8, as she swings during a golf clinic for kids, taught by French, at Waubeeka Golf Links in Williamstown on Sunday, June 23, 2017.

Peter French gives instructions to a young golfer during his golf clinic for kids at Waubeeka Golf Links in Williamstown on Sunday, June 23, 2017.

WILLIAMSTOWN — Waubeeka Golf Links teaching professional Peter French is around 75 years older than the boys and girls who surround him when he begins his weekly one-hour junior clinics on the putting green, but he easily matches their energy level and enthusiasm while teaching the game he loves.

"Peter is patient and positive," said Waubeeka owner Mike Deep, who often helps out at the free clinics. "He has such a great attitude and wants to see his students make progress. He emphasizes that progress to the kids from week-to-week and month-to-month."

French's desire to help youngsters — the group of about 20 boys and girls ranged from ages 6 to 13 on the Sunday afternoon I watched him — is deep-rooted in his distant past, with much of the inspiration coming from a man with a familiar last name.

"I was heavily influenced by Charlie Nicklaus, who was like a substitute parent to me," explained French, referring to the dad of arguably the greatest golfer of them all, Jack Nicklaus.

That is because Charlie, who owned a drug store in Columbus, Ohio, drove Jack, Peter and another aspiring golfer, Bobby Muldoon, around the the state to play in United States Golf Association events during their teen years. To this day, French considers the Golden Bear his closest friend and remains in contact with him.

"His son wasn't the only one Charlie was taking care of," French recalled. "He would watch me as much as he watched his own son [at the tournaments]."

French follows that example by helping young golfers every Sunday at Waubeeka. He started the clinic I attended like a teacher finding out if a student had done his or her homework, asking them to raise their hands if they could tell him one of the fundamentals of putting. Multiple hands shot up and a correct answer — "keep your hands together on the club" — was met with enthusiasm by the teacher.

"I like to ask the children questions and have them step forward to speak in front of the others and their parents," French said. "It gives them some public speaking experience."

French prefers that parents be at the sessions. On the day I attended that was certainly the case. One mother even had two toddlers in baby carriers while her older child was participating in the clinic.

"One of the main things I try to do is get the parents involved and taking part so they are supporting their kids and understand what we are teaching," French said. "I also sense that the kids are more comfortable with the parents here."

When French started the clinics a few years ago, most of the participants were between the ages 11 and 13. But parents of younger kids asked if their children could take part and now many are in the 6-to-9 age group.

These lessons aren't meant to be the equivalent of those given to those attending expensive camps that cater to low-handicap juniors with discussions of swing speeds and launch angles. Its purpose is to give youngsters a fundamentally sound start while hopefully helping grow their enthusiasm for a game they can perhaps play until they are their instructor's age.

As part of teaching putting fundamentals, French has a weekly contest with his clinic assistant, 23-year-old former St. Michael's College golfer Devin Garrison. French sets a target distance by hitting a tricky downhill putt at the hole. On this day, five youngsters hit it closer than French's longtime protege to win a prize. But even those who were off-target received positive feedback.

"He's amazing," said Melanie Medon, whose children — Ryan, 11, and Ethan, 9 — have been taking part for several years. "He can correct them while still making them feel good."

The clinics have become a Sunday family tradition.

"The boys can't wait to come," she said. "They are very enthusiastic and are disappointed when we can't make it."

While it's likely that most of the kids don't know who Jack Nicklaus is, they are no doubt benefiting from the experiences French had in the time he has spent on and off the golf course with Nicklaus and his father.

French was quick to answer when asked if he remembered when it was that he knew his friend and occasional foe, who was three years younger, was something special on a golf course.

"We went to different high schools so we had to play against each other in a match even though we were good friends," he recalled. "We tried to beat each other and I lost. It became a family issue. I told them 'you can't believe how far he hits it,' but they just couldn't understand how somebody that much younger could beat me. ... There were other times I lost to him and would still take heat from the family."

French headed from Ohio to the distant Berkshires following high school to attend Williams College, where he played on the golf team "when it wasn't snowing."

After graduating in 1958, French tried to make a living on the PGA Tour for five or six years before giving up that dream and joining the U.S. Army. French, who considers himself to be very patriotic, was on active duty during tense times in the Cold War. He served in an artillery division and says he lost about 15 percent of his hearing as a result of that assignment.

Playing on the PGA Tour in those days wasn't exactly a lucrative or exotic undertaking.

"You traveled in cars, stayed in tourist homes and found places to hit and shag your own golf balls," he said. "You really had to love it. It's totally different today, and I think that is great."

How different? Nicklaus, who joined the tour several years after French, won three tournaments as a rookie, including the 1962 U.S. Open, and earned only $61,868 that year. Certainly, that was a good living in those days, but doesn't begin to come close to the millions today's tour players compete for on a weekly basis.

French couldn't be more proud of his World Golf Hall of Fame friend, and that admiration goes for things far beyond his golfing accomplishments. .

"Jack is the kindest and most thoughtful person I have ever met," he said. "When his teacher (Jack Grout) died, Jack immediately went to his late wife and made certain she was taken care of for the rest of her life. There is nothing he would not do for her. That is kind the kind of person he is."

They also give to many other foundations, many of which also focus on children. Considering Jack and Barbara have five children and 22 grandchildren, their concern for kids is easy to understand.

Garrison, French's young assistant, met Nicklaus when he was brought by the pro to an invitational senior tournament in Boca Raton, Fla., when he was 12 or 13 and had an unexpected experience that he described as "awesome."

"Jack invited him under the ropes during the tournament and had him walk with him the rest of the round," French said. "That's the kind of person he is. I had tears in my eyes watching that."

After each of the clinics, French, the kids and their parents share lunch in the clubhouse. It gives him a chance to talk with the parents and the aspiring golfers. In almost every case, the children politely come over to thank "Mr. French" before they leave.

"It's fantastic," French said when asked if he still enjoys teaching kids. "I wouldn't do it if I didn't love it."