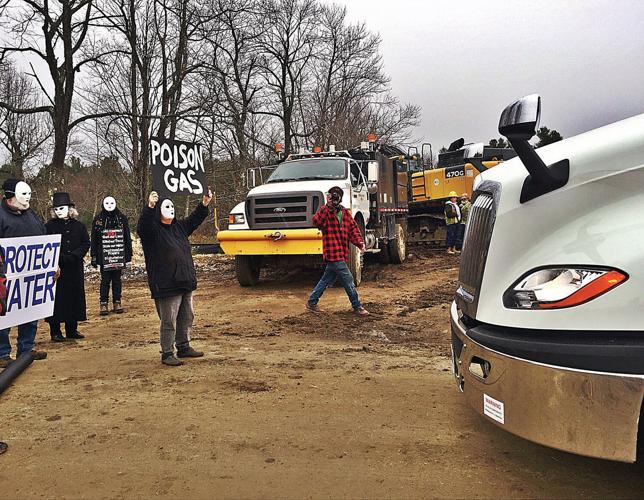 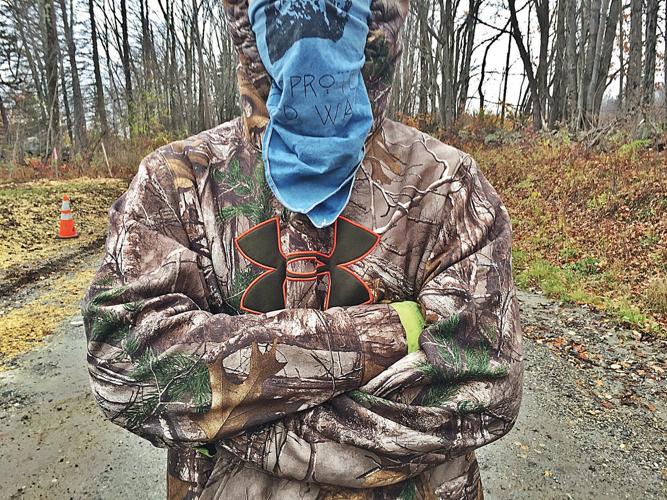 A water protector at one of Wednesday's anti-pipeline blockades on the road near Tennessee Gas Pipeline Co. headquarters on Beech Plain Road in Sandisfield. He said he is from Berkshire County, but did not want to be identified, except by his alias, Dredd Locksman. He said he spent four months on the front lines at Standing Rock, N.D., fighting the Dakota Access Pipeline. 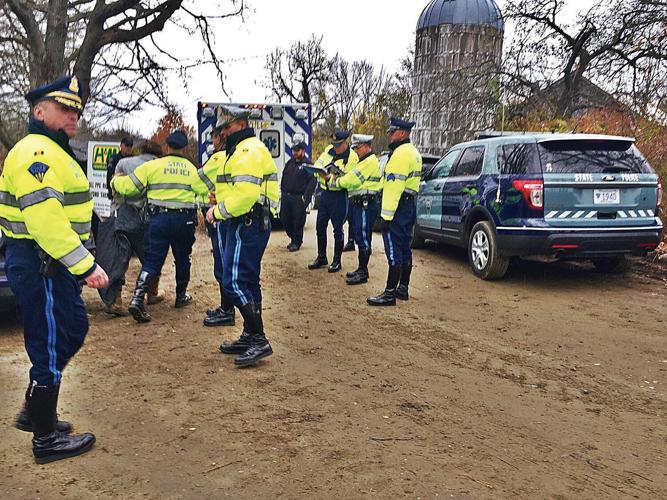 Massachusetts State Police troopers bring an activist to a waiting ambulance after his arrest. Witnesses say that during the arrest process, troopers used a taser gun to subdue him.

A water protector at one of Wednesday's anti-pipeline blockades on the road near Tennessee Gas Pipeline Co. headquarters on Beech Plain Road in Sandisfield. He said he is from Berkshire County, but did not want to be identified, except by his alias, Dredd Locksman. He said he spent four months on the front lines at Standing Rock, N.D., fighting the Dakota Access Pipeline.

Massachusetts State Police troopers bring an activist to a waiting ambulance after his arrest. Witnesses say that during the arrest process, troopers used a taser gun to subdue him.

SANDISFIELD — On the very day the pipeline company got permission to put its new third line in service here, three anti-pipeline activists were arrested for blocking a road, and witnesses say Massachusetts State Police used a stun gun on one man when he tried to run during an arrest.

For the first time since the protests began nearly six months ago, Massachusetts State Police K-9 units were leashed and at the ready, and so was an ambulance as activists formed blockades on either side of Tennessee Gas Pipeline Co. headquarters on Beech Plain Road.

The man, whom The Eagle has not yet been able to identify, was transferred from a state police cruiser to the ambulance for a medical check roughly 30 minutes after the episode.

Though the Federal Energy Regulatory Commission Tuesday gave Tennessee Gas Pipeline Co. permission to flow gas on Wednesday, the political atmosphere of friendly protests and arrests here is increasingly curdling into one of barely concealed hostility.

A group of water protectors, many who had been previously entrenched at Standing Rock, N.D. to fight the Dakota Access Pipeline, are using a more unpredictable and aggressive approach to pipeline resistance than their much-older fellow activists from the Sugar Shack Alliance.

Both groups started working together last summer, and while each occasionally peels off for its own actions, the water protectors lately have been arrested with more frequency and charged with more serious crimes.

The protests and first series of arrests began in early May when the company began to cut trees in a roughly two-mile swath of Otis State Forest that is owned and protected by the state.

Activists, residents and lawmakers have fought the project on a number of grounds, including what they say is the effect of fossil fuels on the climate.

The company says it is working with other pipeline companies toward a solution to the problem.

On Wednesday two water protectors and one Sugar Shack member were arrested standing in the middle of the road after troopers asked them to move so pipeline trucks and equipment could pass into the pipeline work area.

The construction area cuts through a farm on which the company's headquarters sits.

The two water protectors who were arrested could not be identified by press time. One goes by an alias. The other had earlier told The Eagle his name was "Matt" and that he is from Lenox and joined the water protectors after meeting them at a bank divestment protest in Great Barrington last week.

Priscilla Lynch, 65, of Conway, was the third to be arrested.

Truck drivers complained to troopers, and horns were honked while company employees worked on a nearby section of pipeline.

And the scene grew chaotic as state police troopers, company employees and activists moved about, heading up and down the road to check with those at each blockade on the dirt road.

Sugar Shack member Dennis Carr said the water protector who was subdued with the stun gun had tried to run from troopers.

"He ran, and I saw him down, and saw his legs come up off the ground," Carr said.

Other witnesses confirmed this.

While the man was inside the cruiser, water protectors said they were still coming here to stop this pipeline, and to protect the water.

"It threatens the fragile environment here, the wetlands, as well as the water supply," said one young man who told The Eagle he is from Berkshire County, and goes by the alias, Dredd Locksman.

Locksman said was on front lines at Standing Rock from September 2016 to January, before taking the water protection ethic beyond it to battle other pipelines, wherever they might be.

"It is also my responsibility as a human being to protect nonhuman creatures from the onslaught of global warming," he added, just as the state police presence increased along the road.

Troopers secured a zone between the two blockades, put a K-9 unit on either side and told everyone they had to get out of the road.

The Eagle asked why K-9 units were out.

"It's an asset we use," a trooper responded.

Capt. John Penniman said it was protocol to have an ambulance ready when a stun gun is used, and also in the event someone gets hurt for any reason.

A state police photographer took pictures of everyone, including members of the press.

And Penniman appeared to be losing patience, but told one group they were welcome to stay as long as they didn't block the road.

"If you want to stand on the side of the road, have at it," he said.

Heather Bellow can be reached at