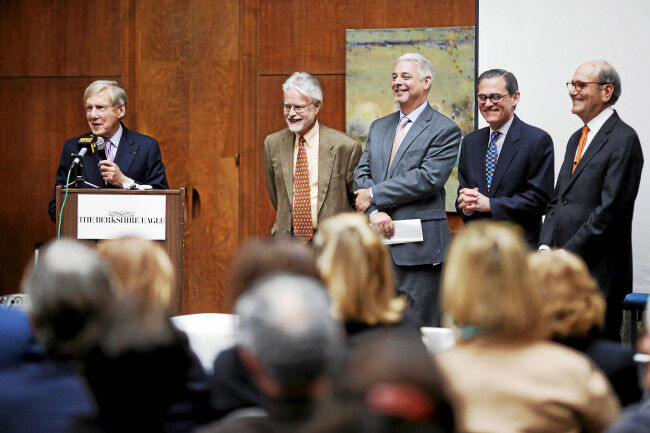 More than 100 members of the community gather at the Berkshire Museum on Thursday to hear the announcement that New England Newspapers Inc., which includes The Berkshire Eagle, is being purchased by a local ownership group. From left are investor Robert G. Wilmers, consultant and board member Martin Langeveld, Publisher Ed Woods, and investors John C. "Hans" Morris and Fredric D. Rutberg. 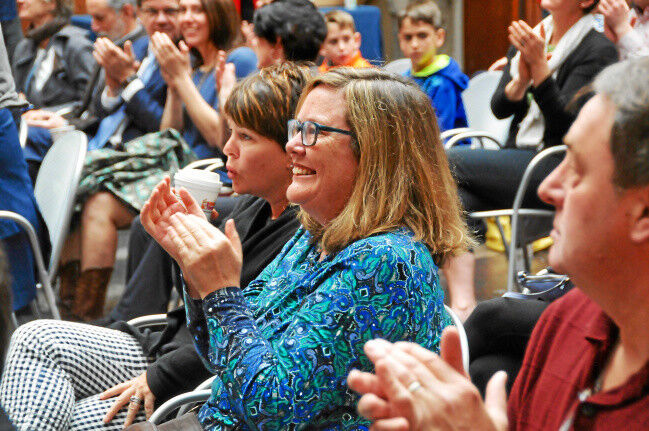 Berkshire County resident Megan Whilden reacts to the news of the sale at Berkshire Museum. 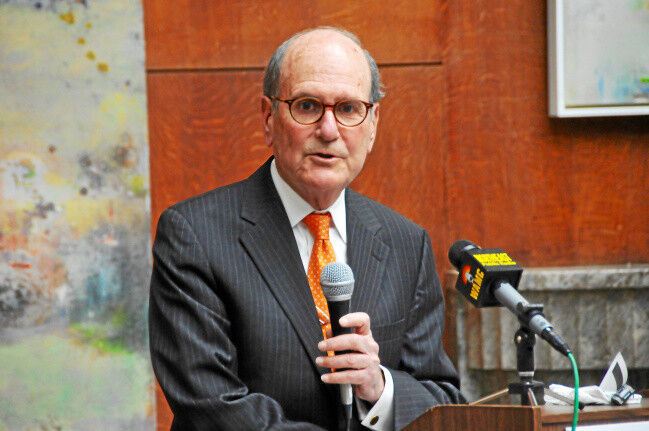 More than 100 members of the community gather at the Berkshire Museum on Thursday to hear the announcement that New England Newspapers Inc., which includes The Berkshire Eagle, is being purchased by a local ownership group. From left are investor Robert G. Wilmers, consultant and board member Martin Langeveld, Publisher Ed Woods, and investors John C. "Hans" Morris and Fredric D. Rutberg.

Berkshire County resident Megan Whilden reacts to the news of the sale at Berkshire Museum.

PITTSFIELD >> In a bold move to restore local ownership of The Berkshire Eagle and its three southern Vermont sister newspapers for the first time in 20 years, a group of area investors is purchasing New England Newspapers, Inc. (NENI) from its corporate owners, Digital First Media.

The purchase price, which includes the regional company's stock but not its real estate, is not being disclosed by mutual agreement with Digital First Media. The group publisher — then known as Media News Group — purchased The Eagle and the Vermont papers from its longtime owners, the Miller family, in July 1995. The Millers had owned The Eagle since 1892.

The new owners, led by retired District Court Judge Fredric D. Rutberg, of Stockbridge, promise to restore top-quality local journalism. The purchase takes effect on May 2. Rutberg, who conceived the plan to form a local ownership group, will be president of NENI and will work at The Eagle's headquarters.

"We're buying the paper to keep it here, manage it and hopefully restore some of its former glory," he said. "It is a daunting task, and we're very proud and excited."

A history of The Eagle, Banner, Journal and Reformer

Historic, poignant moments for The Eagle

The purchase was announced at a news conference Thursday morning in the Berkshire Museum attended by more than 100 enthusiastic community and business leaders. They punctuated the presentation with frequent cheers and sustained applause.

The Eagle staff, relieved by the dramatic surprise announcement, was informed in the newspaper's South Church Street headquarters earlier in the day. Word of the transaction had remained secret until then, except to top management.

Ed Woods continues as regional publisher of NENI. The rest of the management team on the news, editorial and business sides of the four-paper operation are also staying on.

"This is very exciting news for the community, the company, for my employees," Woods said. "The Berkshire Eagle team and the New England Newspapers team feel like they've won the lottery under local ownership."

Rutberg said after he retired as a judge two years ago, he attended a speech by political writer Joe Klein, who stated that citizenship required a town square. That was the inspiration leading him to form a plan for a local purchase of The Eagle and its sister papers.

"The Eagle is the town square of Berkshire County and has been for the last 100 years," Rutberg said, "and it could use some help. The plan is to grow the newspaper, not shrink it. We feel strongly committed to print journalism."

At the Berkshire Museum, he outlined plans to increase the quality in all respects "to make the papers as unique as the various communities they serve. We care about print journalism and newspapers are still hugely important to the social fabric of the communities."

"I believe that by enhancing the quality of the paper, we will increase the quality of life for everyone in the Berkshires, socially, culturally and even economically," Rutberg said.

Plans include the return of an estimated 20 to 25 outsourced jobs in the design, advertising and production areas. The new owners also expect a substantial number of new hires in the first year for positions in the newsroom, marketing, web and technical services, finance and accounting. Current employment at the four-paper group totals 154.

Rutberg described the local group's investment as a pushback against the national trend toward consolidation of smaller newspapers into large media organizations.

The aim is to "reinvigorate The Eagle and its future" as a quality print and digital news and information source with a strong emphasis on local coverage, he said.

"Our business plan is that by increasing the quality both digitally and in print we're going to attract more readers and more advertisers," Rutberg said.

In addition to Rutberg, the investment group includes:

• Robert G. Wilmers, chairman and CEO of M & T Bank for 33 years, based in Buffalo, N.Y., and a 44-year second-home owner in Stockbridge who runs a small wine-making business on the side;

• John C. "Hans" Morris, a Stockbridge resident since 1987, former president of Visa Inc., a partner in a venture capital and advisory firm and also the board chairman of Mass MoCA in North Adams;

• Stanford Lipsey, the former owner and Pulitzer Prize-winner of the Sun Newspaper Group in Nebraska, and publisher emeritus of the Buffalo News.

The investors purchased 100 percent of NENI stock under their newly formed Birdland Acquisition LLC. Morris said the purchase came at a "fair price." The local team has been working behind the scenes to buy the regional newspaper group since the beginning of the year.

"It was an easy sale," Wilmers said. "As we all know, circulation has been going down at The Eagle as it has been at every newspaper in the United States."

"We're patient but we also have a real sense of urgency about the things that need to get done," Morris said. "The world's changing and we have to be in the forefront of that change. As much as we care about the print product, many people want many different formats and we expect those to be just as excellent as the print product."

"We want to focus on having a great local newspaper," Wilmers said. Voicing optimism on the potential of the local economy, he declared that, contrary to some viewpoints, "we don't believe newspapers are dying. We want to have the best community newspaper in the country."

Joining the team as a member of the board of directors is Martin Langeveld, former Berkshire Eagle publisher and a Windham County, Vermont, resident in recent years. He played a crucial role in helping the investment team plan its strategy. Additional board members are expected to be announced in the coming months.

The group vowed that content improvement, as well as major redesigns of the newspapers and the websites, would be expedited urgently, "in a matter of months."

"This will be the end of the cookie-cutter" look of the papers, Morris promised. "The Eagle was once one of the great newspapers in the United States. It's a great organization, has a great history of excellence and it is just as unique as this community."

He called investigative journalism a priority and suggested that a network of "citizen writers" in the area will be encouraged to contribute material.

An Editorial Advisory Board will be appointed to strengthen ties with the community.

"We have an extraordinary collection of talent in the Berkshires, great writers, seven Pulitzer Prize winners," Morris said. "We want people to help us create more interesting things to read."

Expanded coverage of the arts and entertainment, the area's social scene, local history and enterprise reporting are in the works, he added.

Morris, citing the 1973 Pulitzer Prize won by The Eagle's editorial writer Roger Linscott, acknowledged that the paper has been "cited regularly as one of the best newspapers in the United States."

"Not recently," he noted.

All staffers were assured that they will keep their positions at their current pay rates, and that benefits would be maintained, potentially at a lower cost, through new arrangements directed by Holly Taylor, president of True North Insurance, a division of MountainOne Bank, and a former star reporter at The Eagle.

Under the new ownership, NENI will begin profit-sharing with staffers. The Eagle headquarters will remain at the Clock Tower Business Park, 75 South Church St., through a lease arrangement with the current office park owner, Digital First Media.

The leadership, acknowledging a challenging environment as circulation and advertising has declined, promised closer relationships with area businesses and enhanced opportunities to advertise, including some new special sections.

The group stressed that the content, size and look of the printed newspapers would be enhanced, while the digital online and mobile sites are to be upgraded.

"I'm very concerned that we enhance the quality of the entire newspaper," Rutberg said.

The new owners also met on Thursday with the staffs of the Vermont newspapers — the daily Brattleboro Reformer and Bennington Banner and the weekly Manchester Journal.

The Eagle traces its roots back to 1789 as The Stockbridge Star. It came under Miller family ownership in 1891, when the daily Eagle was purchased by Kelton B. Miller. In 1995, the company was sold to MediaNews Group for a reported price of $39 million. The staff was downsized, pay was cut, and additional retrenchment followed.