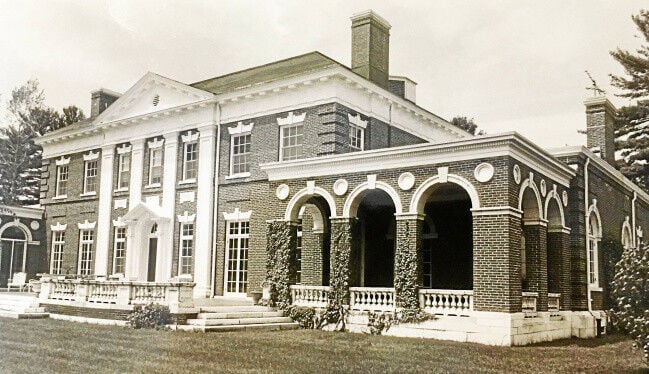 Brookhurst, built by Newbold and Helen Morris, made headlines when it became the first single-family home in the Berkshires to sell for 1 million in 1986. It remains privately owned. 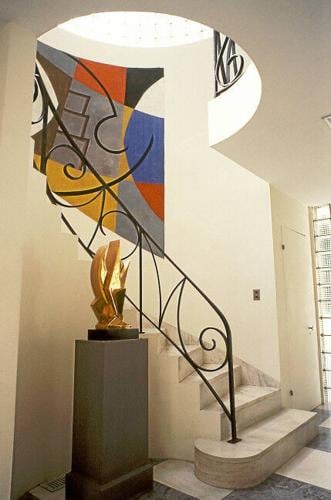 The foyer of the Frelinghuysen Morris house features a fresco painted by George Morris and his wife Suzy Frelinghuysen.

Brookhurst, built by Newbold and Helen Morris, made headlines when it became the first single-family home in the Berkshires to sell for 1 million in 1986. It remains privately owned.

The foyer of the Frelinghuysen Morris house features a fresco painted by George Morris and his wife Suzy Frelinghuysen.

LENOX, MASS. — Sometimes, the legacy of a Berkshire Cottage is more than the bones of an old home. Sometimes, its legacy is found in the descendants of those who built them — and made the Berkshires their home.

High on a hill overlooking Hawthorne and West streets, the Georgian Revival-style estate, Brookhurst, built by Newbold Morris and Helen Schermerhorn Kingsland Morris, to this day remains a private residence. Although it is a little less grand than when it was built in 1908 — a third floor was removed from the wings on either side of the house — the majority of its regal structure remains behind a iron gate and pillars bearing its name.

The estate's public legacy lies on either side of it. On one side sits Morris Elementary School, on 10 acres of land donated to the town by the Morris' three sons: A. Newbold, Stephanus (who later changed his name to Stephen), and George. On the other side is the Frelinghuysen Morris House and Studio, a nonprofit museum dedicated to sharing the work and collection of artists George L. K. Morris and Estelle "Suzy" Frelinghuysen Morris. The museum is run by Suzy's nephew, Kinney Frelinghuysen, who serves as director, and his wife, Linda, the communications director.

In September 1906, Newbold and Helen Morris purchased the estate of William B. Shattuck. Shattuck's Eastlake estate, Brookhurst, which was built in 1885, burnt to the ground the previous year. All that remained were a barn and superintendent's cottage.

Newbold, a cousin of Edith Wharton, was a descendent of Gen. Lewis Morris, signer of the Declaration of Independence.

From the time the second Brookhurst was completed in 1908, Helen Morris split her time between Lenox, Paris and New York. Newbold, who is commemorated in Trinity Episcopal Church in Lenox, donated its electric hanging lights before his death in 1928.

In the 1931, George, home from studying with abstract painter Fernand Leger in Paris, built a studio on the estate near the remnants of a previous estate. In 1940, the couple built a two-story house, attached to the studio, in the new International Style.

Helen Morris continued to keep up the estate until her death in 1956, when it passed to her three sons. The house was placed on the market, but did not sell. Instead the land was divided.

"Stephen and George split the land," Linda Frelinghuysen said during a recent visit to the Frelinghuysen Morris House and Studio. "Stephen took the mansion, while George and Suzy took the 46 acres that the house and studio sits on."

George died in a car accident in Stockbridge in 1975. Suzy, whose grandmother, Matilda Griswold Frelinghuysen, built the Frelinghuysen House (now the Kemble Inn), died in 1988. Stephen and his wife, Persis, made their home at the mansion at least six months out of the year from 1959 until the late 1980s. Stephen died in 1984.

In 1986, the sale of the Brookhurst estate made headlines for two reasons — it was the first single-family home in town to be sold for $1 million and it was one of the last Gilded Age cottages still occupied by the family that built it.

Elm Court, the last of the Berkshire cottages to have remained in the family of its original owners, was sold in 2012 for $9.8 million.

Made of white stucco and glass, the home and studio of George and Suzy Morris must have raised more than a few eye brows when it was built in the shadow of Brookhurst, with its ornamental columns and vast gardens. The two homes, separated by simple fencing couldn't be more different.

"George's parents wanted him to become an architect," Linda says as we walk past one of George's fresco's on the way into the home. "He became very active in the modern art movement. He was on the Modern Museum of Art's art buying committee. They gave him $1,000 and sent him to Europe. They wanted a Cézanne and he came back with a Picasso and a Mondrian."

"He'd buy a painting for the museum and then pick up one for his collection. When they needed money to build the house, George sold one of his Picasso's to Peggy Guggenheim for $4,500."

George seemed to push the envelope in every aspect of his life. While his brothers are remembered for their public service, he and Suzy were busy introducing America to the modern art. Besides being artists themselves, both George and Suzy, a trained opera singer, were founders of the American Abstract Artists.

Today, the house and studio are frozen in time. In the foyer, the bright colors of a fresco painted by the couple welcomes the visitor, where hourly tours take guests into rooms filled with art deco furniture crafted by Gilbert Rhode, Donald Deskey and Alvar Aalto — names just as important as those attached to the paintings that hang on the walls — Picasso, Henri Matisse, Jean Arp and Sophie Taeuber-Arp.

Although the couple never saw great sales during their lifetime, their work now hangs in prestigious museums and private collections. "We found a price tag that said $25 on the back of this one," Linda says, pointing out a small collage by Suzy as we pass through a dining room. "She probably had it at an art show. Something similar to this just sold for $56,000 at auction."

Jennifer Huberdeau is the online editor for New England Newspapers Inc. She can be reached by email at jhuberdeau@berkshireeagle.com