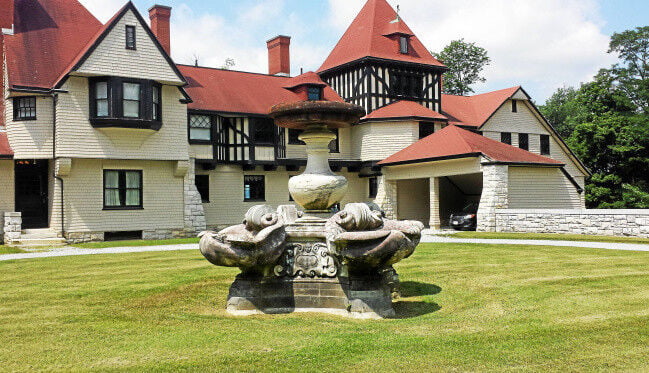 Elm Court, the summer home of Emily Vanderbilt Sloane White, was built on the town line of Lenox and Stockbridge in 1886.

A view of Elm Court's library.

Elm Court, the summer home of Emily Vanderbilt Sloane White, was built on the town line of Lenox and Stockbridge in 1886.

A view of Elm Court's library.

At its social height, Elm Court, the 106-room, 55,000-square-foot summer cottage of Emily Vanderbilt Sloane White, was host to a variety of notable figures, including the financier John Pierpont "J.P." Morgan and her niece, Consuelo Vanderbilt Spencer-Churchill, Duchess of Marlborough.

In a 1948 North Adams Transcript article, Alphonse Chague, veteran superintendent of the estate, recalled meeting many notable diplomats during his tenure, including French military leader Marshal Ferdinand Foch. Foch was one of several foreign dignitaries said to visit the estate in 1919, as the guests of Emily Vanderbilt Sloane's soon-to-be husband, Henry White, a former ambassador to Italy and France, for the so-called "Elm Court Talks," one of a series of preliminary conferences that would shape the Treaty of Versailles and the League of Nations.

When construction began on Elm Court, so named for the towering American elm that once graced the property, its owner was known as Emily Vanderbilt Sloane. She began building the American shingle-style estate in 1885 with her husband, William D. Sloane. Sloane and his brother John, of Wyndhurst, owned W. & J. Sloane and made their fortune importing oriental rugs and selling home furnishings.

The Sloanes, who had five children, aimed to build a modest summer cottage with the aid of architects Peabody and Stern. However, at the end of 1885, Emily's father, railroad tycoon William Henry Vanderbilt, died suddenly, leaving each of his eight children $10 million. With money no longer a factor, the plans for the home changed before it was completed.

Over the next 15 years, as the other Vanderbilt children built their mansions in Newport and Ashville, N.C., Elm Court grew in size and prestige. It would take 13 months and some 70 designs for Frederick Law Olmsted, the architect of New York City's Central Park, to plan the estate's gardens. The estate would also house 23 greenhouses, including one large enough to house palm trees, a butler's house, gardener's house, several barns, stables and carriage houses. The estate was reported to have 4,000 chickens, produce 40,000 pounds of hay a year and have 25 coaches and horse teams.

Following William Sloane's death in 1915, Emily continued to summer in Lenox. In 1920, at the age of 68, Emily Vanderbilt married Henry White, 70. White, a diplomat, died at the estate in 1927 after an unsuccessful surgery. Emily would live almost another 20 years, dying at Elm Court in the summer of 1946 at the age of 94.

In 1947, Elm Court was sold to the owners of High Lawn Farm, White's granddaughter, Marjorie Field Wilde and her husband, Helm George Wilde. A year later it reopened as an inn. After 12 years, the family mothballed the inn and boarded up the home. Over the next 40 years the once grand estate fell into ruin, as vandals and thieves stripped it bare, spray painted walls, and ripped out fixtures and paneling.

In 1999, Elm Court, then owned by great-granddaughter Lila Wilde Berle via a real estate trust, was sold for $947,380 to White's great-great-grandson Robert Berle and his wife, Sonya. The couple would spend three years renovating and restoring the home, turning it into a luxury bed-and-breakfast. The couple sold the estate in 2012 for $9.8 million to Travaasa Experiential Resorts, a collection of destinations resorts and spas, ending its 137-year history with the family of Emily Vanderbilt Sloane White.

Despite Travaasa securing special permits from both Lenox and Stockbridge, plans to invest $50 million to turn the 90-acre estate into luxury resort and spa, with 112 guest rooms (96 rooms in a new addition) and a 60-seat restaurant, are on hold pending a case which will be heard in Massachusetts Land Court on Aug. 16.

Entering the Elm Court estate through iron gates and driving down its white, crushed-gravel driveway is a surreal experience, as the Gilded Age cottage slowly rises in the distance behind a second gateway of marble pillars. The estate's fountain, a replica of the Fontana delle Tartarughe (Fountain of Turtles) in Rome, languishes on the lawn. Unlike its twin in the gardens of The Elms at the Vanderbilt estate, the Breakers, in Newport, the fountain has seen better days. Long gone are the bronze turtles and male figures riding dolphins — ravaged by both time and thieves.

My worries that this is yet another cottage that no longer glitters are fleeting, as I'm greeted at the door by Les Freeman, the estate's general manager. He warns me that the billiards wing of the house has not been restored, as he ushers me into the entrance hall where I'm entranced by the carvings of birds, vines and trees on the brownstone fireplace. It's here that Freeman shares an estate secret with me.

"Emily Vanderbilt had servant call buttons placed all around the house. Her great-great-grandson told met that she not only put them in the walls, but also on the floor. Only she knew the locations of them," he says, stepping on a button to demonstrate. "If she was at a party and she didn't want to talk to someone, she'd stroll around the room, push a button with her foot and a servant would come out to get her."

I'm told the rug in the library was found in storage by the Sloane family's descendents, as we pass through to see breath-taking views of Stockbridge Bowl. Beneath the windows, a fountain is waiting to be restored and gardens planted.

"Olmsted left the plans for the gardens with the family," Freeman said. "It's the intention of the new owners to phase them in over several years."

I marvel at the restoration efforts as we walk through rooms with plaster ceilings filled with laurel and wreath reliefs. At the same time I'm saddened as Freeman relates how silk tapestries were literally cut out of the dining room's walls, mahogany paneled walls were kicked in and spindles from the staircase railings were burnt in the fireplaces. But for every bit of destruction I hear about, there seems to be a glint of Gilded Age that survives.

Freeman has high hopes for the estate. He talks of plans to restore the closed wing and to restore the greenhouses, where fresh fruits and vegetables will be grown for the restaurant. You can see him imagine what was and what is to come — perhaps he'll get to entertain the king that never arrived during Mr. Chague's time.

Obsessed with HBO's 'The Gilded Age?' Take a look back at some real Gilded Age history, here in the Berkshires