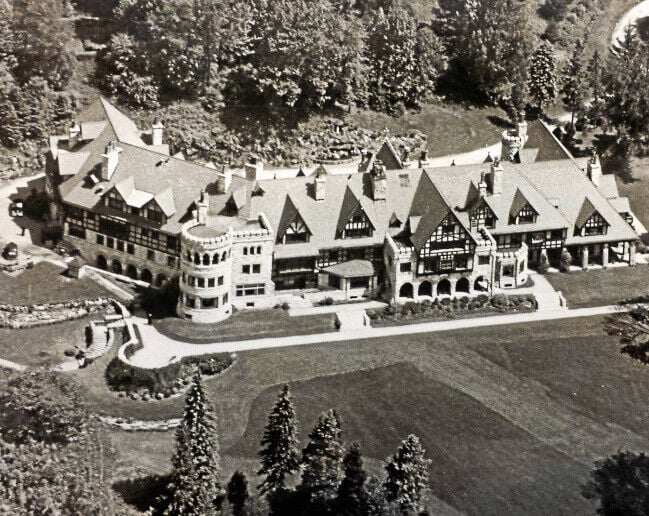 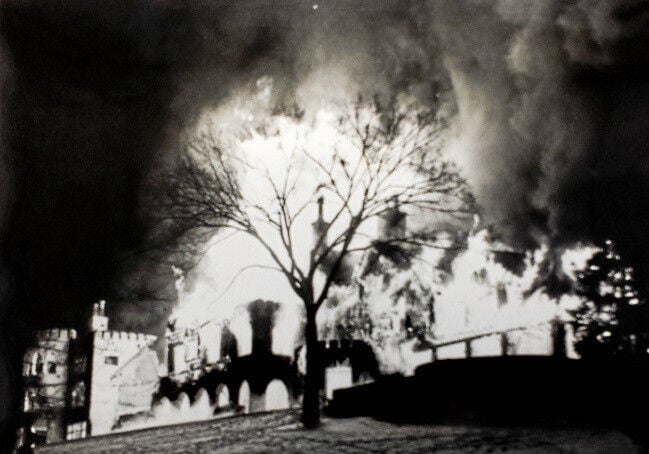 Shadow Brook, which was sold to the New England Province of the Society for Jesus in 1922, burned to the ground on March 10, 1956. 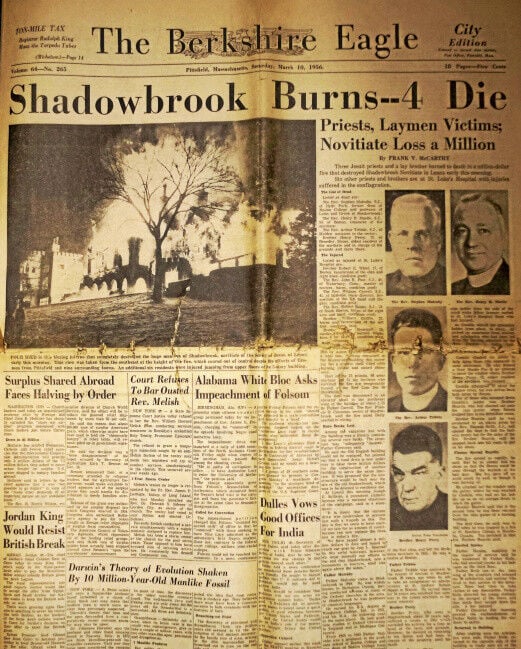 Image of the Berkshire Eagle from March 11, 1956, covering the fire. 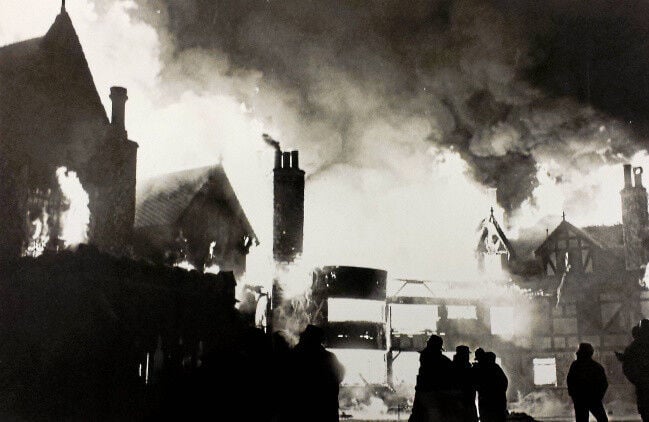 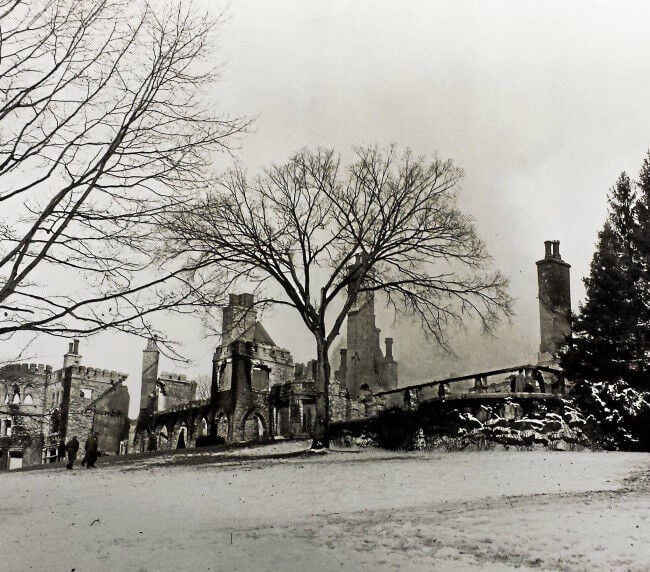 Four people died in the 1956 fire, which completely destroyed the once grand mansion. 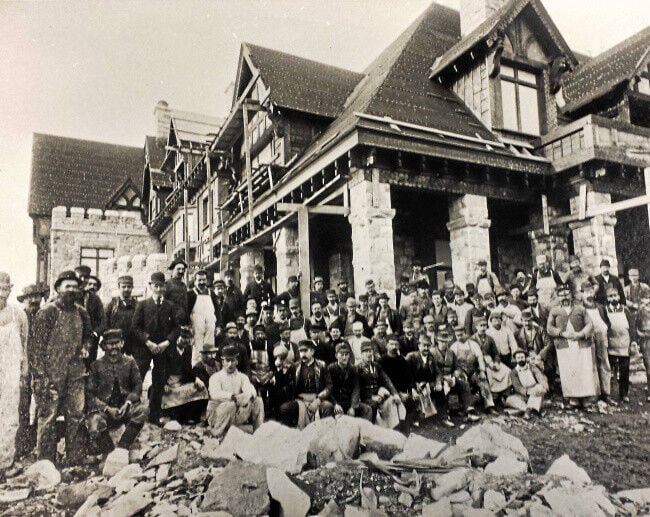 Crew members who built Shadow Brook are photographed on the building site. 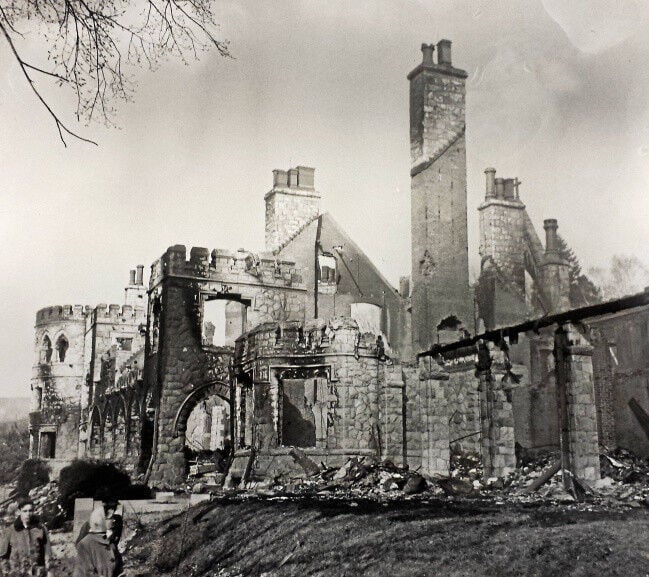 An oil explosion in the boiler room caused the fire that mushroomed up the elevator shaft of the seminary.

Shadow Brook, which was sold to the New England Province of the Society for Jesus in 1922, burned to the ground on March 10, 1956.

Image of the Berkshire Eagle from March 11, 1956, covering the fire.

Four people died in the 1956 fire, which completely destroyed the once grand mansion.

Crew members who built Shadow Brook are photographed on the building site.

An oil explosion in the boiler room caused the fire that mushroomed up the elevator shaft of the seminary.

When Anson Phelps Stokes abandoned Shadow Brook, his mammoth-sized 100-room mansion overlooking Lake Mahkeenac in 1901, there was much speculation as to reason.

Some believed it was the arrival of the trolley in Lenox, Mass., along with a new hotel and other modernizations that would soon drive away the other cottagers, who had enjoyed the exclusivity of the Berkshires for the last 10 to 12 years. Others imagined that the land Shadow Brook was built on was cursed. In 1903, an article in the New York World newspaper said that Stokes and his wife, Helen Louisa Phelps Stokes had abandoned their summer cottage after just five seasons because it was "cursed" by the American Indians that had once lived on the estate's 1,000 acres.

"The wise ones, who are versed in sorcery and legendary lore, declare that Anson Phelps Stokes has been driven away from 'Shadow Brook' by the workings of an old Indian spell," the article, which also appeared in the Wichita Daily Eagle, states. The article contends that Stokes is the second homeowner near Lake Mehkeenac, now known as the Stockbridge Bowl, to fall victim to "hoodoo" magic, insinuating that Nathaniel Hawthorne had fled the Berkshires and that the Beckwithsaw estate was abandoned because of ghostly visitors. (It's owner, Leonard Beckwith, had mental health issues and died in 1895. The house, which was tied up in legal issues, was sold in 1904 and was last known as the DeSisto School.)

In reality, the reason for the Stokes family's departure from their beloved Shadow Brook was the result of a riding accident in 1899.

"My groom warned me not to ride the young gelding, but as I learned that he had reared and had gone over backwards, I supposed the fault was heavy hands and a curb bit. I told him I was not afraid of any horse and to bring 'Dingley' around with an exercise bridle. (Boasting went before a fall.)," Stokes wrote in 1902, in the last volume of "Stokes Records: Notes regarding the ancestry and lives of Anson Phelps Stokes and Helen Louisa (Phelps) Stokes," which was published privately for the family in 1915.

Dingley, the gelding who had twice tossed Stokes' groom, would eventually prove too much for Stokes, who held on for his life. The horse crashed into a row of elm trees, crushing Stokes' leg and fell on him. The accident resulted in two surgeries and the loss of Stokes' left leg. The horse was eventually deemed to be "insane" and put down by the family's veterinarian.

"After the loss of my leg, I was unable to enjoy Shadow Brook as much as I had previously done, because I could no longer ride about the place as I had been accustomed to do, and of course, I could not play golf," he wrote of the decision to sell Shadow Brook. "Most of my children, being actively engaged in business and in benevolent work in New York, found they had much need to be in the city during the autumn, which was the Lenox season, and Lenox was too far away for them and for me to get easily back and forth from town."

It was not as if the Stokes family hadn't enjoyed their home high on the hill. Having arrived in Lenox in the late 1880s, The Phelps Stokes, as the couple and their children were known, first rented a cottage and then bought The Homestead in 1899. They had just finished enlarging their new summer home, adding on a ballroom and other necessities, when a cottage known as Oakwood came on the market. Stokes snapped up the lake-front property and began building Shadow Brook in 1893. Oakwood was converted into barns for the horses.

The family moved into Shadow Brook in September 1894.

The house, which was the largest in the country for a single year — until George W. Vanderbilt opened Biltmore in Ashevill, N.C. in 1895 — was 400 feet long and three stories high. The ground floor had 17 principal rooms, including a ballroom, library, parlor, reception room, breakfast room and billiard room as well as kitchens and servants quarters. The second floor included 20 bedrooms and 15 bathrooms, while the third floor had another 11 master bedrooms and nine master baths, 11 servants rooms and five servants baths, along with a store room, linen room and cedar room. The basement had a laundry room, wine cellars and furnace rooms.

The family was known to throw lavish parties for their children's friends, often entertaining dozens in the winter months.

"There's an infamous story about Mrs. Phelps Stokes, responding to her son about the number of people the house could host," Cornelia Gilder, co-author of "Houses of the Berkshires, 1870 to 1930," said during a recent lecture at Ventfort Hall. "The story goes that one of the sons, who attended Yale, wired home that he'd be coming home with a party of '97 men. It's not known whether he meant 97 men or men from the class of 1897, which we presume, but his mother is said to have replied: 'Don't make it more than 50; have friends already here.' "

She added what is known, is that it wasn't unusual for the children to host parties that included 42 or 43 of their closest friends.

In 1906, Shadow Brook and 396 acres were sold to Spencer P. Shotter, a Canadian turpentine and cotton mogul by way of Savannah, Ga., who along with his wife, was known for hosting lavish balls and the Berkshire Hunt.

If the land on which Shadow Brook sat was cursed, Spencer P. Shotter would be the next owner to fall victim to it.

"In 1909, Spencer P. Shotter and his partners, who owned the American Naval Stores Co., were prosecuted by the federal government for violating anti-trust laws," Gilder said. "They were found guilty, but Shotter appealed. He won his case, but lost his fortune in the process."

In 1915, the house was rented out to Mrs. Alfred G. Vanderbilt, whose sister-in-law owned Elm Court. According to an article published in the New York Times, Vanderbilt, whose husband died on the Lusitania, rented the estate for $15,000 that season. Of interest was another article in which it was noted Mrs. Vanderbilt had posted guards at the entrances of the estate as she feared that someone was trying to kidnap her sons.

Potter's debtors sold the home in 1917 to Andrew Carnegie for $300,000. Carnegie died at the estate in 1919. The estate was sold to the New England Province of the Society for Jesus in 1922. The home would be converted into a Jesuit novitiate, where Jesuit priests were trained.

Shortly after midnight on March 10, 1956, an oil explosion in the boiler room caused a fire that mushroomed up the elevator shaft of the seminary.

The fire eventually burnt the house to the ground and took the lives of three Jesuit priests and a lay brother.

The fire left the 125 residents, who were housed at the Red Lion Inn for a time, without a home. However, the Jesuits were already in the process of raising funds to build a "fireproof" building on the site. The new building, also known as Shadow Brook, opened in 1958. It served as a seminary until 1970, when the novitiate moved to the Boston area. The building sat empty until 1983, when it was sold and became the The Kripalu Center for Yoga & Health.